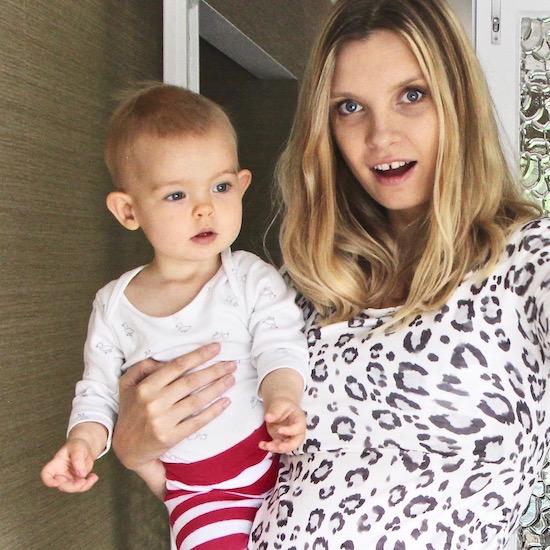 I think that many of you might have guessed at this news already; trying to keep something like this a secret when you write about yourself on a regular basis (and appear in videos, in other people’s videos and on Instagram!) is nearly impossible.

Let’s not beat around the bush – baby TWO is on its way. Yes, my friends, another delivery from the stork is expected in early February and nobody – nobody – was more surprised to find this out than me. Obviously I know how it happened, but the fact that it took six-ish years to have Angelica meant that conceiving again on what must have been the third go (“Go”! Ha) was something of a shock. I sort of thought, naively, that I’d be exempt from that whole “ooh, you’re so fertile after having a baby” thing.

Anyway, we are delighted – I wanted two babies reasonably close together, in an ideal world, and with lots of wine and meditation and sound-cancelling headphones I’m sure that a 20 month age gap will be perfectly manageable!

I have so many posts coming up talking about my early pregnancy – it was something I felt I really should have talked about last time, but life took over and it seemed weird to go back and retrace steps after Angelica had been born. This time, I tentatively took notes – symptoms, feelings, anxieties – so that I could document the pregnancy here on The Uphill. I also sporadically recorded some diary-style videos for my brand new Youtube channel –

– a Youtube channel, for The Uphill! You can go there immediately and press on the subscribe button, if you like. At the time of writing it has 0 subscribers, I haven’t even subscribed to it myself, so it looks rather lonely.

So, lots of early pregnancy posts coming up, including my fears about another miscarriage and other things that I’ve wanted to write about but never found the right time. I hope that many find it useful – it’s such a weird, unsettling time in the first few months. I’ve always felt very lonely and paranoid and it’s only when the first trimester has passed that I feel able to open up and talk about it.

But here I am, twenty weeks in – feeling good, I have to say, apart from the general tiredness. And the fact that I look about twenty-thousand months pregnant and not twenty weeks. (If one more person says “you’re carrying large! Is it twins?”) Above all, I feel so incredibly, incredibly lucky. Just over two years ago I had quite honestly started to give up hope with regards to having a baby of my own – it seemed as though my body simply did not want to play ball. To have a healthy, beautiful daughter and now another baby on the way; it’s more than I could ever have wished for.