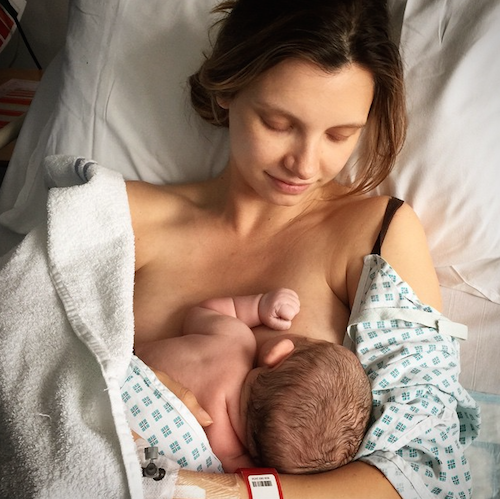 Apologies to those who don’t follow me on Instagram or Twitter: it must have seemed as though I had suddenly disappeared from the face of the earth! This is the first time I’ve had access to my main computer and also, more crucially, the first time I haven’t had a very small human being attached to my chest. The baby (a beautiful, beautiful girl, born on the 17th June, more details to follow!) is asleep in the pram and I’m seizing the opportunity to “get things done” – though this is the sixth attempt today, so we’ll see how far I get…

11pm: well that went well. A whole paragraph! I’m trying to remember all of the things that I wanted to say in this first update post, but my mind is still quite foggy and I’m not sure where to start. Believe it or not, I actually wrote my last post (Pregnancy Week 41) when I was in early labour. My waters had broken at 4am on the Tuesday morning (16th) and I had been to the birth unit for a quick check-up. I spent the whole of Tuesday and the early hours of Wednesday in a weird state of semi-established-labour: strong contractions that were sometimes only three minutes apart, but then whole periods of time where they weakened off and became less frequent. It was incredibly frustrating, and things weren’t helped at all by the fact that my birthing unit had a policy that labour had to be induced 24 hours after the waters had broken, so I really felt that I was under pressure to “perform” and get the labour established. Apparently the induction policy is because of increased risk of infection once the waters have broken, but quite a few people at the hospital told me that the risk is tiny, I have yet to look up the stats. I really got a bee in my bonnet about the whole induction thing, at the time, but as it happened I never got that far because…

…just before they were about to induce me, they did a final internal check and realised that what at least ten different midwives had thought was a head sitting on my cervix wasn’t a head at all. It was a baby bottom. Baby had been breech the whole time! The funny thing is that I had been paranoid about the baby’s movements for most of the latter part of my pregnancy but hadn’t wanted to say anything because I didn’t want to jinx things: I thought that it was very weird that all of the “kick” movements seemed very low down in my pelvis and the movements higher up were like a rolling sensation. I had mentioned it to a couple of midwives during my antenatal visits but they had said that so long as there were regular movements if I lay quietly then there was nothing to worry about. In retrospect, I should have trusted my instincts, because every time I put my hand on the hard, round thing that was at the top of my belly I knew that it felt like a head! I had felt it from around 32/33 weeks.

The hospital (I wasn’t allowed anywhere near the low risk birthing unit by this point) weren’t incredibly happy about the idea of delivering a breech baby naturally. Although it is entirely possible, the fact that my labour was progressing slowly (the contractions actually stopped completely when I got to the hospital) meant that they would only deliver naturally if for some miraculous reason my labour started again in earnest over the course of the day. And so I ended up having something I had never even considered: an emergency caesarean section! After all of my many hours of breathing practice and visualisation and leg-strengthening exercises (for squatting! Stamina!) I ended up having to confront my absolute worst fear (apart from being trapped in a small space) and prepare myself for surgery. I was an absolute wreck – I don’t know whether I’ve mentioned before that I am somewhat hospital-phobic, but to say that I was jittery would be a total understatement. If my husband wasn’t a total rock and brilliant at keeping me on the level then I think they would have had to have sedated me.

I’m wondering whether anyone would be interested in a proper “birth story” post because I don’t really have much wisdom to impart – once my body was numbed it wasn’t like I had to do very much! Just lie there and call on my meditation techniques (the hypnobirthing practice was still incredibly worthwhile, it kept me a whole lot calmer than I would have been!) and wait for the baby to take her first cry.

And what an amazing first cry it was: quite possibly the most surreal moment of my entire life. One minute I could feel lots of pressing on my tummy and a weird rolling sensation down my body and the next I heard my very own baby taking her first breath. I couldn’t see her because they put a bit screen in front of your face so that you don’t have to watch yourself being worked upon (which I imagine would be quite like having some kind of out of body experience!) but as soon as she cried I felt the most amazing sense of relief and excitement and I was a little bit worried that I might give myself a heart attack because it felt as though my heart was going to burst out of my chest. I had never really allowed myself to imagine what it would be like to hold my baby or see my baby and so I was absolutely unprepared for the moment the midwife brought her around to see us. On the one hand I was totally wired on adrenaline and whatever drugs they had me on and didn’t fully comprehend that this was the little being I had carried around for so many months, but on the other hand it was a bit as though I was being reunited with a very old friend who I hadn’t seen in a long time. The face was completely new and alien to me but at the same time weirdly familiar.

The baby’s sex was a complete surprise; absolutely everyone I know thought that I was having a boy. And I was convinced I was having a boy. Only my husband had a feeling that it would be a girl. So it was a true surprise when they called out “it’s a girl!” (we had asked them to be very old-fashioned about calling out the sex and the whole surgical team humoured us) and also quite a surprise to find out that she weighed a whopping 9lbs 11oz. The midwife at my 40 weeks appointment had guesstimated a baby weight of about seven or seven and a half pounds and so I had packed loads of “tiny baby” clothes rather than “new baby” – I couldn’t believe it when they told me her weight! Though she has an absolutely monster appetite so now that I’ve known her for a couple of weeks it doesn’t surprise me one jot. It definitely explains why most of my baby weight was in the bump – she was obviously snorkelling up those Cornettos and Tracker bars that I was feasting on in the last month!

Ah, The Guzzler is awake: that’s all from me for today. Apologies again that this update is so tardy – I shall be back with much more. If you do want more detail on the whole birth experience then let me know – as I said, there’s not so much to say about the actual delivery part, but I can remember every little thing about the day so if it would interest you then I’ll certainly write a dedicated post. And then I need to start on the baby stuff because I have so much to talk about – heatwaves, nipples, the list is endless!