The phrase “carry-on suitcase” makes me laugh because I always think of the Carry On film series – what a boring film Carry On the Suitcase would make! “Ooooh er missus! Would you like a hand with your zips? Can I help you stuff your bag?” Sorry. Over-active imagination. For those unaware of the British Institution that is Carry On, you can get a good sense of how most of the movies are constructed by watching the video below.

I’ve managed to go quite off-piste already – I only wanted to tell you about my new suitcase! I was mooching about in John Lewis in Westfield (East not West) and they had a sale on Antler cases. I have been looking for a carry-on suitcase for a while now – the one that I have is only just the right size to take as hand luggage and it’s far too big to take away for just one or two nights. I felt a bit silly turning up in Marrakech with the big red monstrosity when I was only really there for two days! Half of it was empty, and it’s a big old cumbersome thing to wheel about the airport and lift into the overhead lockers. 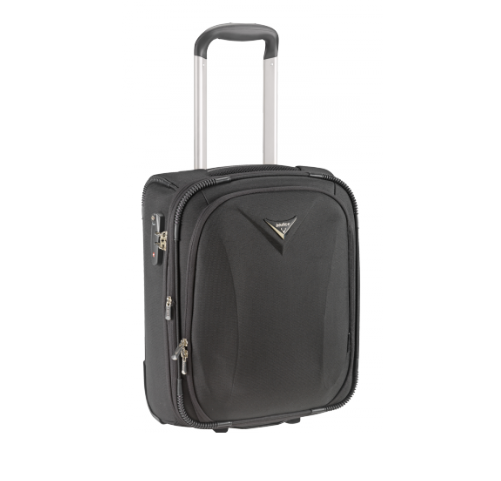 As most of my trips are short, I thought that it made sense to buy a smaller case – one that would fit laptop, a change of shoes, a couple of clothes changes and my toiletries bag. The case that I chose was a Teklite, a very smart , well-designed case that provides the optimum amount of space for packing. It has lots of clever pockets and pouches, a separate sleeve for your laptop and a hardened front security pocket (lockable) that you could pop your iPad, laptop or valuables into. The measurements are 45 x 34 x 20, or 23cm if the expanding part is pulled out. I’m very pleased with my new little case – it was reduced from £105 to £75, which was an extra bonus. 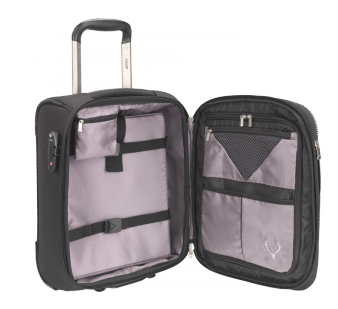 I have had many cheap cases during my eleven years as a model and I can categorically state that it’s worth getting something quality if you’re going to be doing a lot of travelling. I’ll never forget the moment when I picked up my huge case at JFK airport, pulled it by the handle and the whole back of the case sheared away! Bad quality luggage is a total false economy!

Here’s a bizarre photo of my new case with an UGG boot next to it. I suppose I took it to show scale, but now I’m publishing it simply to strengthen the notion that I might be a little insane. 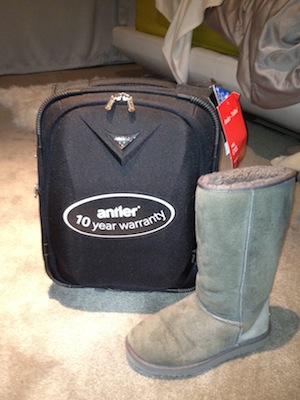 I can’t seem to find this case at John Lewis Online but it’s well worth checking instore. They have a variety of Antler cases of this size, all of them reduced in price!