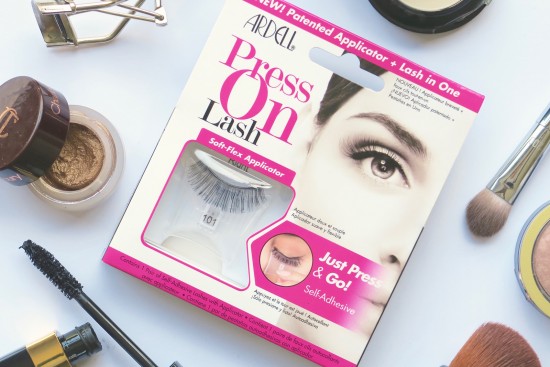 Those who have mastered the application of false eyelashes need not read on; they will find this post faintly ridiculous. Those who would rather rewire all of the electrics in their house wearing a blindfold and oven gloves than attempt to spread rubbery glue along the edge of a flimsy band with an approximate thickness of 0.00001mm and try to stick it on their eyelids without gluing their lids together, their lashes together or scratching their retina: I have a treat for you.

Ardell’s Press On Lash with self-adhesive. “Just Press & Go!” it says on the packet. And that, my fellow lash-hating friends, is exactly what you do. The edges of the lashes are pre-sticky and you just position them with the soft-flex applicator before pressing them to the lid. I actually found that they didn’t come away from the applicator very easily and did better without, but each to their own. This has revolutionised my makeup world: Barbie-esque eyes are now within my everyday reach. (You still have to position them, which is trickier than you’d imagine if you’ve never tried it before – like attempting to wrestle a small live centipede, but at least you’re not wrestling a small live centipede who’s leaking adhesive from the length of his torso.) Let’s ignore the fact, for a minute, that I am in no way a lover of overdone lashes; they look absurd, especially when the wearer lowers their eyes and you see the full scale of the untruth. A block of black, wispy fibres perched unnaturally on the edge of the lid like a plastic eye-pelmet. But do I want the option to be able to wear overdone lashes? Yes! Yes I do! And not all lashes look overdone: I chose style 101, and they were quite – how can I put this? – enthusiastic, but I’ve spotted some called Wispies and shall have to now try those, too.

I do very much like the way that they transform the eyes with little in the way of effort. Here’s my before and after: 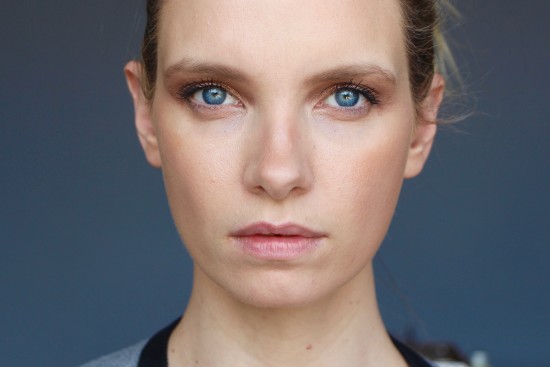 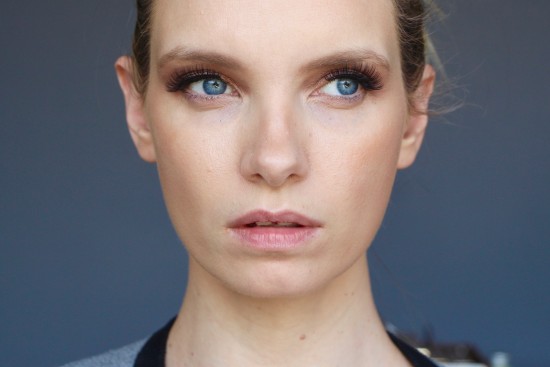 I mean, it’s definitely a “look” and not one I’d wear to nip down to Tesco, but for drawing attention to the eyes, opening them and making them look brighter and more awake? Marvellous.

The best thing about this discovery is that I feel slightly more confident about applying lashes with glue. I haven’t gone there just yet (my last attempt ended in disaster a few years ago and I am still haunted by all of the occupational-hazard-horrors that frequently used to happen to me in the makeup chair) but I’m working up to it. In the meantime, I’m sticking (geddit?) to Ardell.

You can find the Ardell lashes online here for £7.45 – in the course of looking for prices I have found other pre-glued lashes (I honestly had no idea they existed, I’m obviously late to the party!) so shall make it my mission to try them all and report back. The only downside I see is the fact that they can only feasibly be stuck on once – after that, surely the adhesive is used up and you have to apply them the traditional way? No getting around that, I suppose, but it’s something to think about on a cost-per-wear level…