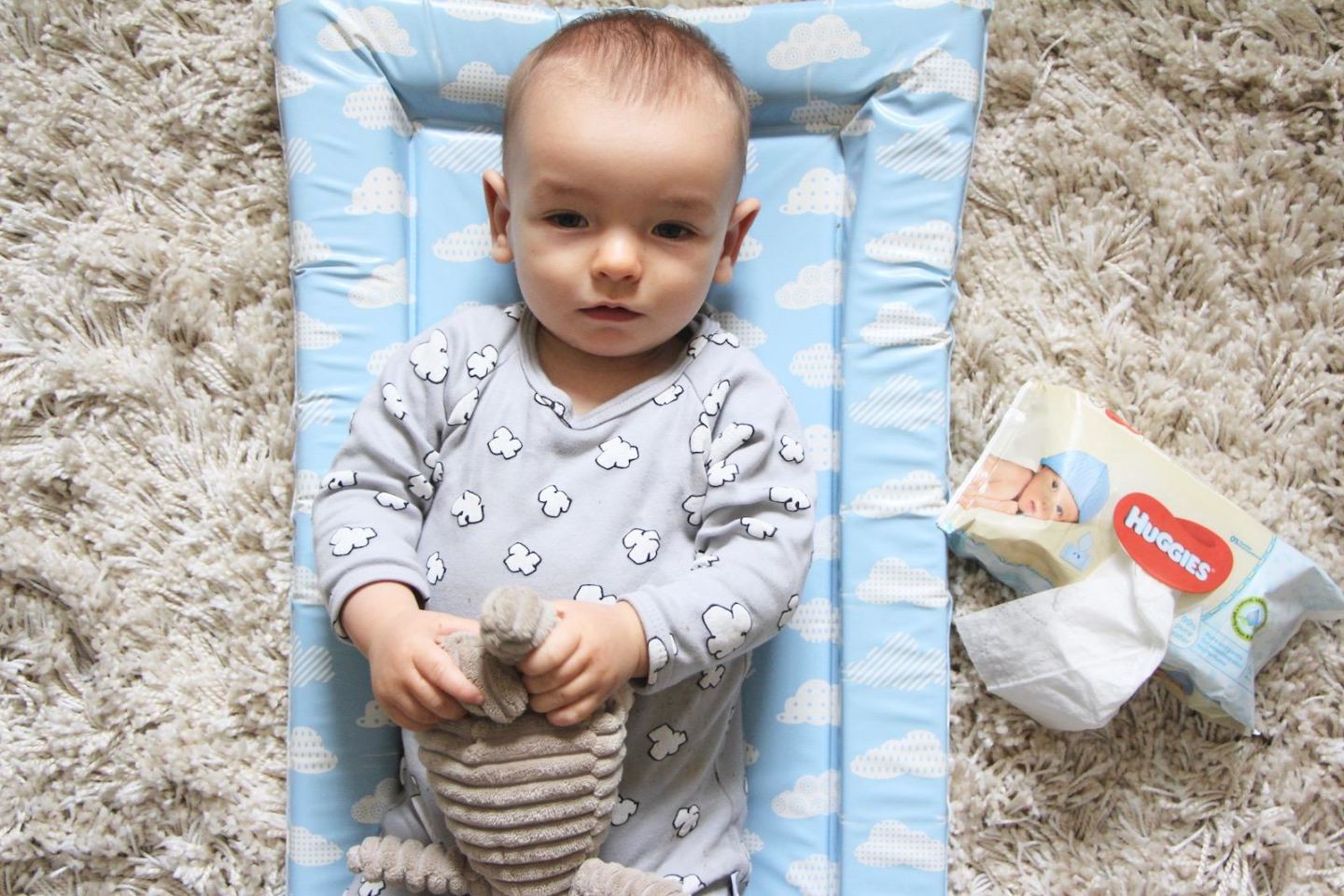 This is the first of three posts that I’m writing in collaboration with Huggies Pure Wipes. A while ago, I started talking with Huggies about some ideas for features about nappy changing and I realised that it wasn’t a topic I had covered before. There are some obvious comedy moments that could have been discussed (anyone else experienced the 3am “wee fountain”?) but apart from those, I always considered baby changing, or nappy changing, to be one of those tasks that we all just got on with. No need to discuss – it’s not like breastfeeding, or sleep issues, where you desperately want to hear other people’s experiences and get reassurance about the way you’re caring for your baby…

But then I started thinking about the actual process of nappy changing and how frequently we do it throughout the day (and night). It’s probably the biggest interaction that we have with our babies other than feeding them, and it’s also quite possibly the most that we touch and examine them, because we undress them and clean them and then often we have to apply cream or change their clothes. And then, when you think about it, it’s a time when they have our absolute undivided attention, because they are there, a captive audience, looking up at us, and I often find that it’s the time I do the silliest faces or chat the stupidest chat or sing the silliest songs. 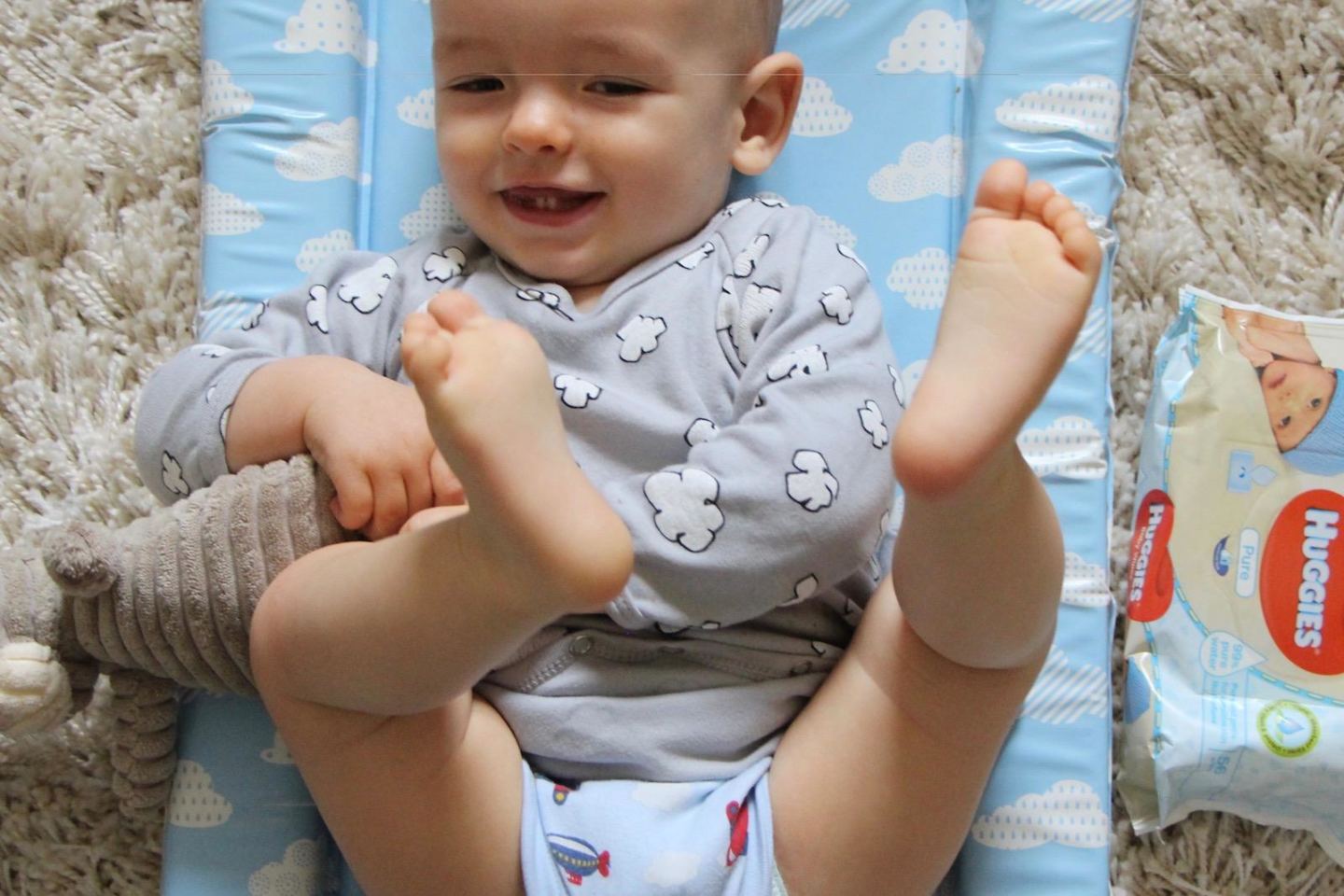 So actually, as it turns out, there’s quite a lot to talk about when we turn to the task of nappy changing. Not least things like nappy rash and nappy creams and – one of my favourite conversations with fellow baby-carers – poo explosions. (Severity of, duration of, items of clothing binned, items of furniture ruined, square footage of carpet requiring steam-cleaning, etc.)

In this post I want to talk nappy changing – I’m looking forward to some brilliantly graphic anecdotal material from you all in the comments section! Then in the next Huggies Pure Wipes post, I’ll be talking about my favourite natural skincare products for babies. In the third and final post, some lovely ways that you can interact with your baby while you’re changing them – making the most of the one-on-one time, regardless of how short it might be.

It’s funny to think of this now, but before Angelica was born the thing that was top of my list of “things I don’t feel prepared for” was nappy changing. I had never done it, it seemed like a very complex process (to be fair, I still regularly put nappies on the wrong way around) and because it was a totally alien experience to me, I worried that I would mess it up. Oh the irony – nappy changing was one of the simplest things to conquer. Cracked nipples and having to inject myself with anti-clotting medication, definitely more of a challenge.

Here are the key things I’ve learnt about nappy changing (add your own tips in the comments): 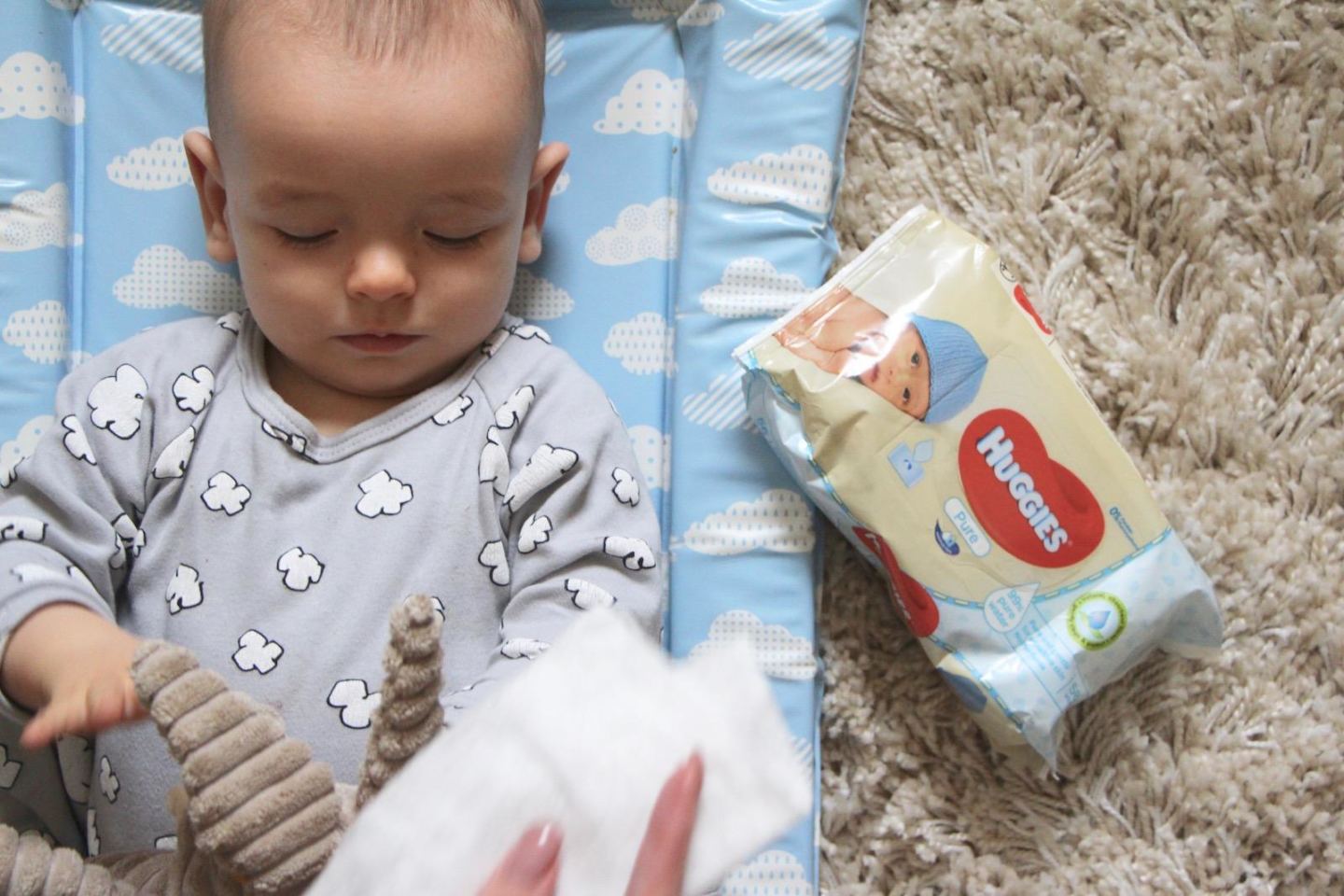 And what about the process of nappy changing itself? It seems simple, doesn’t it? Remove dirty nappy, clean the hazardous area without becoming a victim of some sort of foul gunging, apply and secure clean nappy. But after my chat with Huggies, I started to think a lot more about the importance of caring for the baby’s skin during nappy changing – it’s not just about cleaning. When you think about how many times a wipe comes into contact with a baby’s skin throughout the day, it’s actually very significant. We look at what’s in products such as body oils and creams, or baby shampoos and washes, but what about wipes?

I’ve been using Huggies Pure Wipes for three months now – on both baby and toddler – and they’ve been a great addition to my baby changing kit. (FYI, other items in my arsenal (arse-nal, geddit?!): Kit and Kin nappy bags, biodegradable; Weleda Calendula Nappy Cream and the Tommee Tippee Nappy Disposal System, which is perhaps the most useful of all bins ever invented. You stick the used nappy through the hole in the top, twist the handle and it gets sealed into its own section of bag. When you empty the bin you have a succession of nappies, cocooned in plastic – it’s like a giant string of beads!) 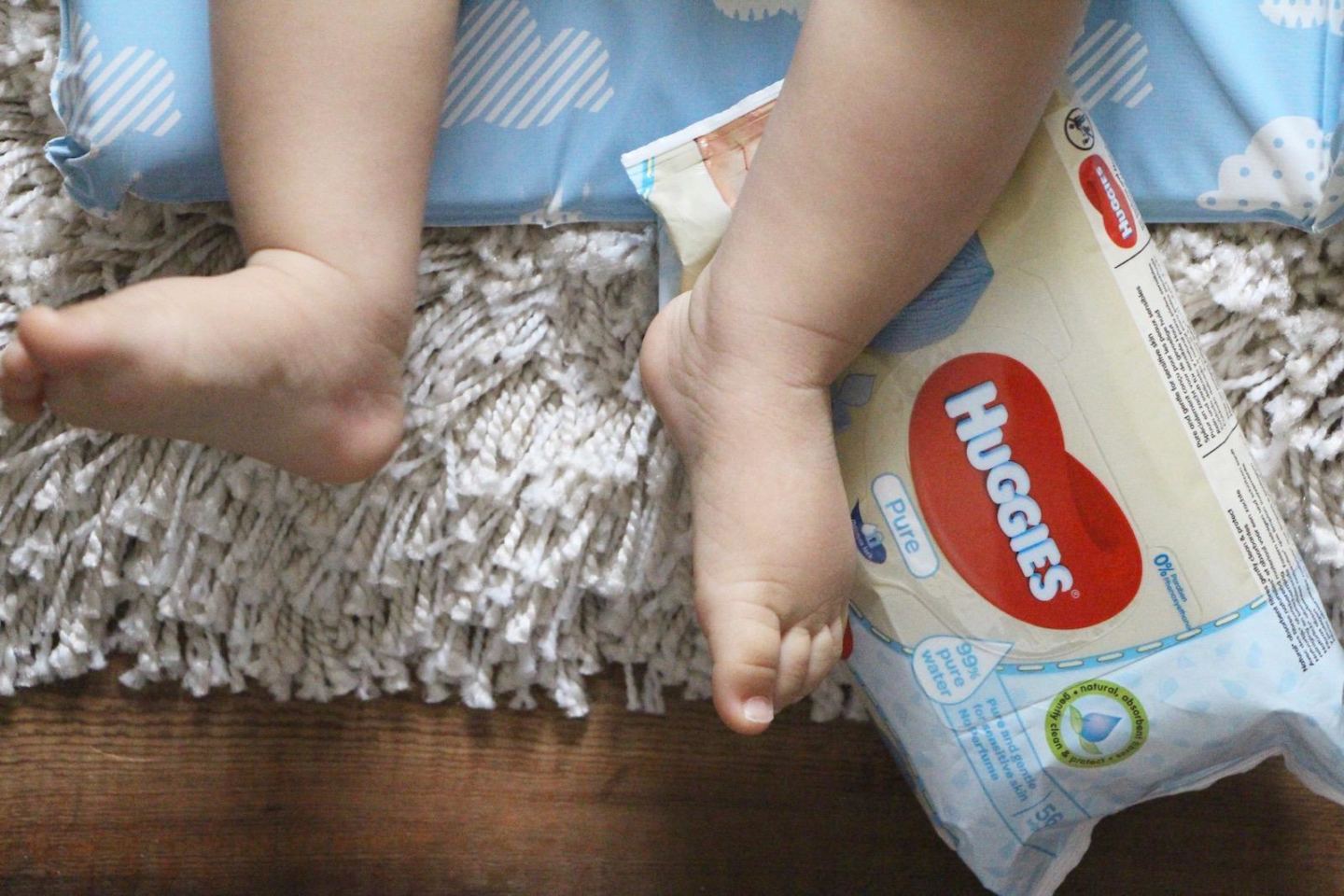 Huggies Pure Wipes are made with 99% water, plus natural absorbent fibres** mean they’re very gentle, soft and kind on delicate baby skin. They don’t contain phenoxyethanol or parabens and are safe to use from day one. (Which is a huge bonus, because the faff I had with newborn Angelica and the “cotton wool and water” method was unreal. “Just use cotton wool and water in one of those plastic top and tail containers!” they said, and I cursed them, all of them, as the water from the cotton wool dribbled down onto the bedlinen and I put my foot into the plastic container and almost broke my neck, sending the dirty nappy flying into the air only to land poo-side-down on the carpet.)

Knowing that you’re using the most kind and gentle products on such a sensitive area feels like a huge baby-caring box ticked: it’s like when I get Angelica to eat a massive bowl of peas, or chopped fruit, and I have a sense of relief that she’s had some sort of food that’s not beige. (Why do they like beige so much and hate green? What did I do wrong? I started her with vegetables way before she had any concept of them being boring, wind-inducing ordeals. And I eat my broccoli in front of her with an almost indecent level of enthusiasm. It’s a mystery.) 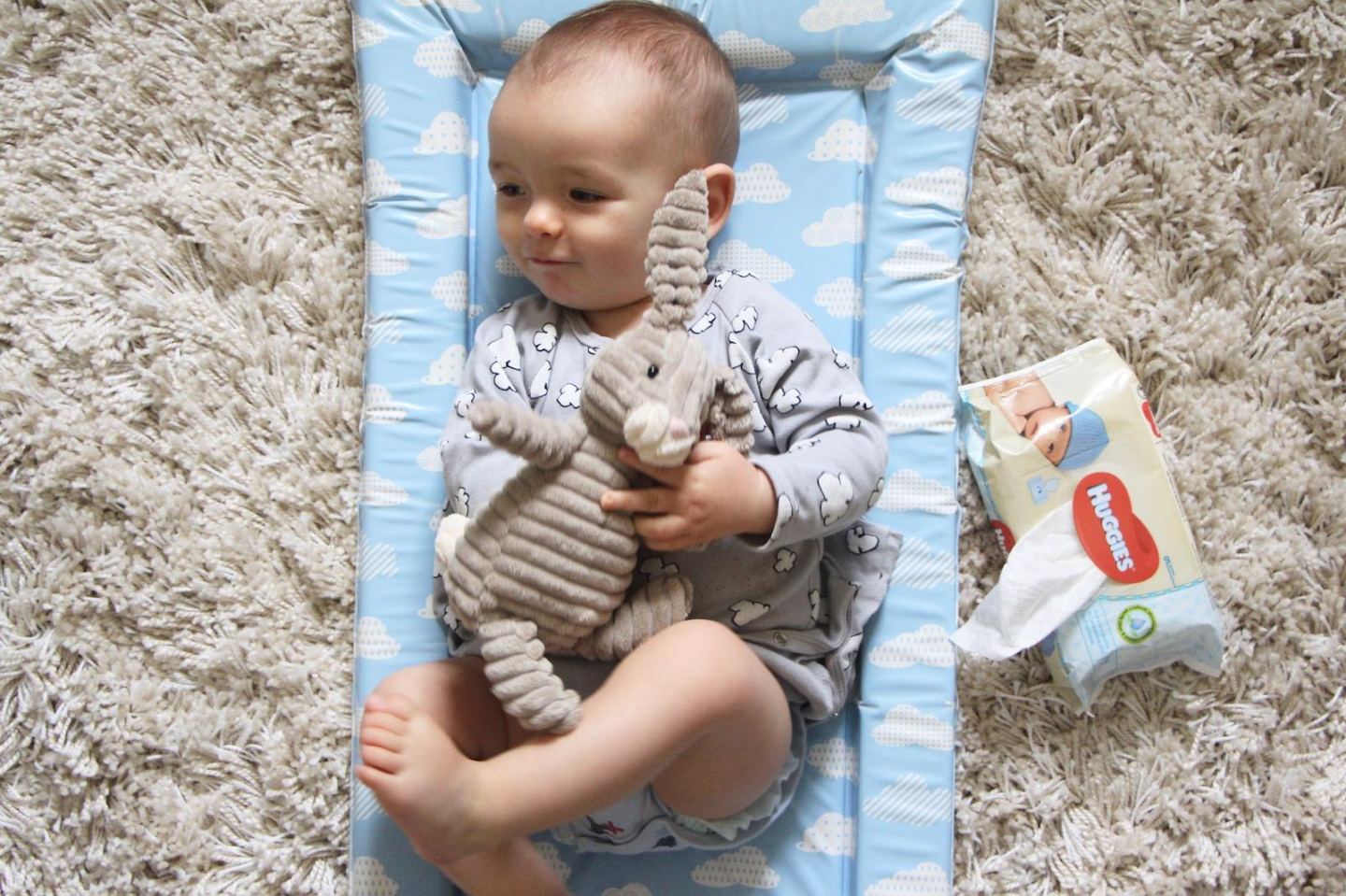 I sometimes feel as though it’s the products we use most frequently in life that we overlook. I know that when I’m writing about beauty, people are far more interested in the face mask than the deodorant, but surely it’s more important to know what’s in your deodorant, something you use every day, rather than an occasional face mask? The body scrub arouses more interest than the shower gel – again, which do you use more? It’s like when we spend money on a “going out” outfit that will only get worn a few times, but refuse to pay more for jeans, which get worn (if you’re me) every day. Toilet paper, jeans, trainers, baby wipes, shower gel – these are the important things in life!

In all seriousness, I’ve never had any major nappy rash problems with either Angelica or Ted, even throughout teething. I think that gentle cleansing is important – so Huggies Pure Wipes are perfect, and also the natural body washes and bath products that I’ll talk about in the next post. And making sure that nappies are changed as soon as possible after the deed has been done seems to be a good rule. I’ve always tried to be fastidious about frequent changing and also drying the creases at the tops of the legs as well as the more obvious areas – it’s amazing how deep the creases are in their chubby little limbs! It’s like prospecting for gold, mining on down into those folds. 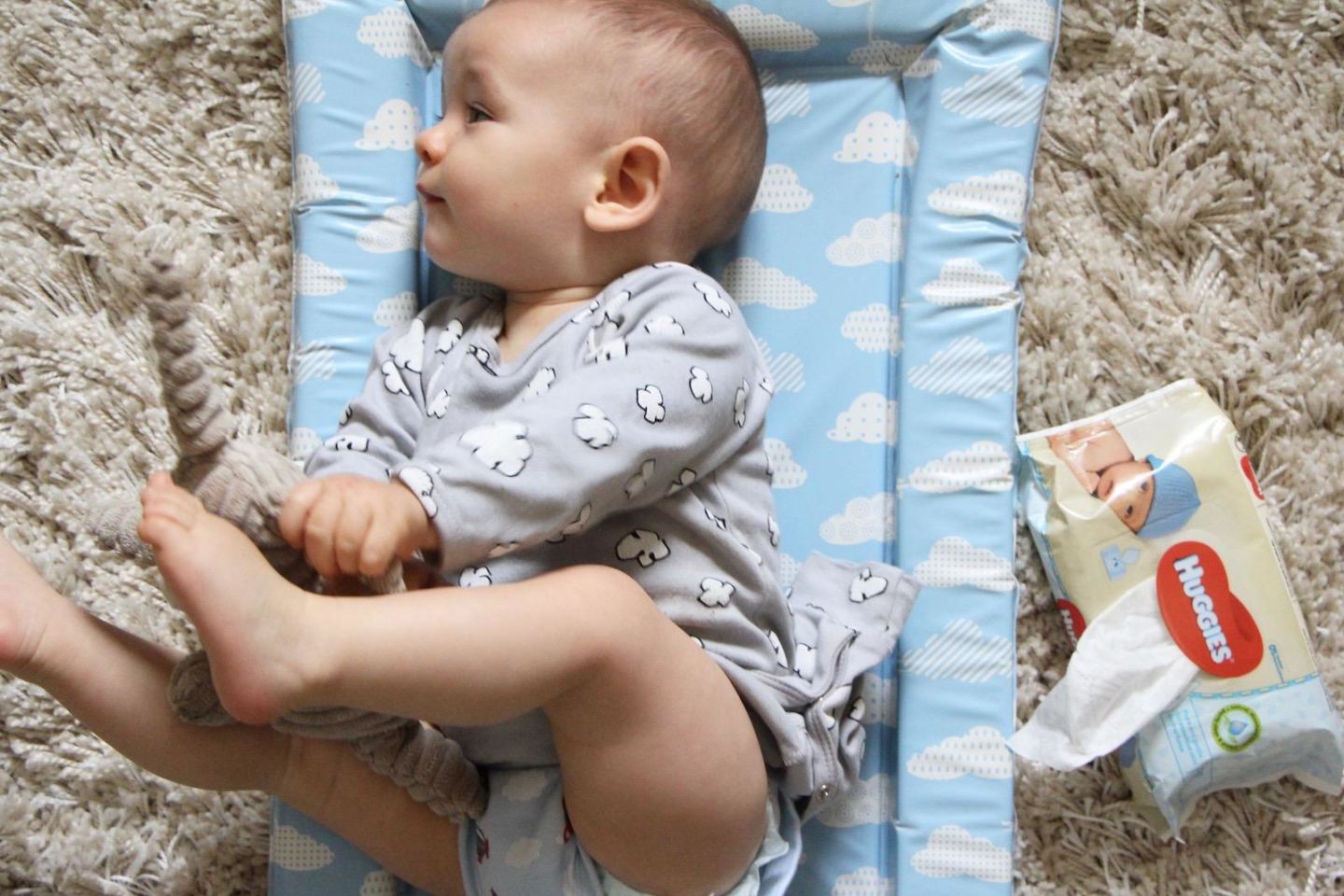 Right, comments team: hit me with your worst nappy-changing stories. Mine was the time I had to change Angelica in a pub restaurant that was packed with OAPs, on the carpet on the floor because they didn’t have a baby changing area. (But they did have parking spaces with chargers for electric cars, so, priorities.) Angelica was about a month old and the poo had shot down both legs and up to her neck. I had to dress her in a napkin!