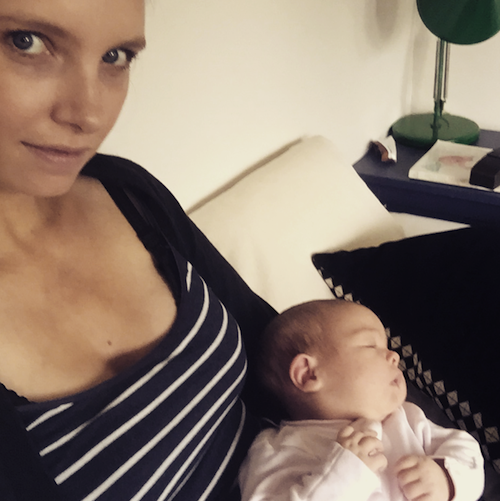 Right. Apologies. I meant to start this at week 1 and give you all the gory details (bodily fluids, bruises, etc) but the time has absolutely flown by and I now have a baby who is ONE MONTH OLD and a C-section scar that has healed nicely and an arm that no longer bears the marks of a completely inept attempt at inserting a cannula. (More on that in the “not for the squeamish” post that I have in my drafts folder. It’s sat there with the half-finished posts on breastfeeding, top newborn baby products, my birth story, something rambly about breech babies and a rant about how the media deals with the subject of infertility. I’ll get to them, I promise.)

So: a “month one” update, in which I’ll try to give you a brief history lesson on what’s been going on with baby Angelica (sshhh, keep it between us!) and with my body.

Baby: birth weight was 9lbs 11oz and after two days she had dropped to 9lbs 7oz but was back up to her birth weight by day five. So that was all good. At her three week weigh-in she was 10lbs 1oz and I’m pretty sure that she has gained around five thousand kilos since then, because I am developing biceps and shoulders that a wrestler would be proud of. She feeds a lot in the evening (on and off for about six hours!) but tends to sleep for around four or five hours at a time otherwise. I feel extraordinarily lucky that she sleeps for five or even six hours overnight (usually midnight until five thirty and then after a little feed, from about six am until ten or eleven) but I know that babies change constantly and so I’m enjoying this perk while I can!

I had very mixed opinions from Midwives and Health Visitors about the baby sleeping for more than three or four hours at a time: some wanted me to wake her up every three hours to feed her, others said that she was putting on loads of weight and so it was absolutely fine. I worried for a while and tried to wake her after three or four hours, but she wasn’t having any of it and eventually I realised that it was absolutely RIDICULOUS to be trying to force her to feed when she was very happily laying down her own set of rules. After a week or so of panicking (cheers, health people who can never agree on anything and give contradictory advice!) I spoke to a very good midwife who said, very calmly, that I had a big baby who was putting on weight, feeding well and sleeping when she wanted to and to enjoy every minute of sleep that I got. Which is what I’ve been doing.

Body: my C-section scar healed quickly but I was too squeamish to even look at it until last week. (Apart from that, I have a weird saggy belly flap thing that obscures my view of the nether regions and so looking at my scar, which sits on the bikini line at the very bottom of my abdomen, wasn’t all that easy.) I was quite taken aback about the whole C-section experience: it wasn’t a procedure that I had really researched or prepared myself for. Looking back, I’ll admit that there’s a certain arrogance to the way that I assumed I would never need one – I’ll hold my hands up and put that out there – but then after speaking to friends who have also needed emergency caesarians, they assumed the same thing. That they would have a natural birth, with no complications, because they had sailed through pregnancy without too much of a problem and had been labelled “low risk”. It was a total shock to me that my birth didn’t turn out as planned and I do wish that I had at least skim-read the sections on assisted births and c-sections and so on, but then perhaps it was better that I went in with my “positive mental attitude” that I had developed from reading the natural and hypnobirthing books, because as it turned out I was reasonably okay, mentally, with the course that the birth took and I managed to stay as calm as could be expected when a person has a near-phobia of hospitals and a morbid and over-active imagination.

Where was I? C-section. Yes. God, I’m putting my heart on a plate today, aren’t I? I’m virtually asking to be trolled! I was quite surprised at what a major operation it was – I had never really considered that before. When I tried to walk for the first time it was as though someone had removed all of my stomach muscles – I had to hobble to the loo almost doubled over because there was simply no strength in my core to hold myself upright. Nothing hurt, because they pump you full of painkillers (and I took the lot, on advice of the doctor, because apparently if you feel pain then you’re less likely to get yourself up and about and it’s not good to be sedentary and totally bed-ridden after a c-section) but I was incredibly squeamish and had to kind of turn my brain off to be able to go to the toilet. (The two Cs: cannula and catheter. I’ll save those for another post, shall I?)

By the way, none of this is supposed to be scary or “horror-story”: it was all perfectly manageable and alright, really. You know how I hate horror birth stories! It wasn’t the birth I had expected but it was pretty straightforward in that there were no complications or dramas with the c-section. Finding out that my baby was breech after about a million people had “felt the head engaged” was something of a spanner in the old works, but hey! What’s life if there aren’t a few surprises?

Body, body, body…what else? My boobs are huge. Porn star huge. Which has its pros and cons. Pros are mainly that I can balance things on them, and look in the mirror and pretend to be an adult movie “personality”: cons are many and various. The bazoomers are heavy, for a start, and comfy bras just don’t do the job in terms of support. They also make me look about twenty pounds heftier than I actually am, in a kind of matronly way. But they are doing a good job with the baby-feeding (more on that in another post) which is the whole idea, so I’m not complaining. If they look like marbles in a sock when I’ve finished with the feeding: then I’ll be complaining!

My skin continues to be good – no spots or dry patches. It’s actually the best it’s ever been, apart from my eye bags and dark circles, which – if I have no concealer on – make me look like an extra in a zombie movie. I try to make an effort to put on a bit of Bare Minerals Complexion Enhancer and concealer straight after moisturising just to make myself look and feel a bit more alive. If I miss the cosmetics window (the two minutes after brushing my teeth) then I spend the day avoiding mirrors and wondering why the dog is hiding under the table.

That’s all to report, really, for month one: lots of baby growth from baby and daytime-tv-watching from me. There were a few things that took me by surprise, post-birth: I didn’t realise, for a start, that you bleed for weeks or that breast milk actually squirted out in a high-powered stream, like a cow, but I want to address these in a more direct way elsewhere. Also: what the hell are you supposed to wear when you’re in large, high-waisted knickers (needed to hold maternity pads in place and also to avoid chafing the c-section scar) and need to be able to breastfeed every thirty seconds? I’ll be tackling that particular sartorial problem next week.