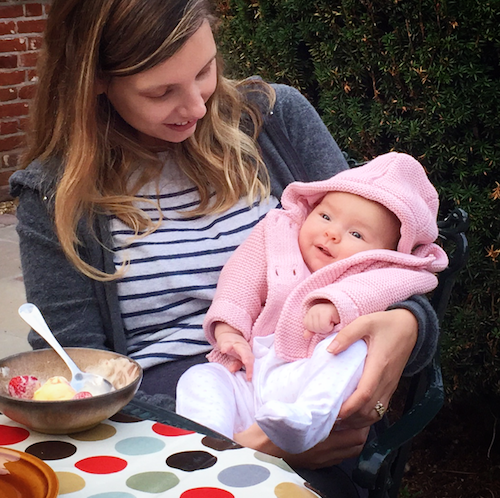 Oh, where has the time gone? I honestly thought that being indoors with a baby, constantly feeding, would make the time really drag but actually I would quite like to press pause so that I can savour every moment. I now understand what people mean when they say that each phase flies by – Angelica is now so long in the legs that I’ve had to put her in 3-6 month babygrows!

Here’s my two months baby and body update – I was going to change the frequency of these updates to be weekly, because there are so many changes all the time, but I don’t want to commit to posts that I may not be able to produce.

I’d love to know how much my baby weighs, but I honestly have no idea. I’ve tried that trick where you weigh yourself and then hold the baby (cat, dog, etc) but my scales aren’t that accurate, so I’ll have to tell you once she’s had her doctor’s appointment on Tuesday. It’s jabs day, which I’m not looking forward to, and then we have to pop to the health centre to see the health visitor because I missed the last appointment. (The poor lady turned up at my house to find a building site filled with shouting workmen – no baby – because nobody had listened to my voicemail!) It’s truly amazing how quickly babies grow – I remember sorting out clothes with my Mum and holding up the 0-3 month babygrows and just thinking how massive they looked. And now Angelica is already too long for them! (Annoying because they are actually all trapped in the storage locker, because I thought I’d be back in my house by now, so there will be a pile of pristine, unused outfits that I won’t need. There’s always someone to pass them on to, but I was really looking forward to putting her in some of the little bodysuits.)

In the past few weeks, things have become so much more interesting in terms of interaction – when I got that first smile it just absolutely melted my heart, and now it has become a constant mission to get as many smiles as possible. Which means that I stand there like a loon making the most ridiculous noises and doing crazy arm movements. I feel very lucky that I got to spend the last month with my Mum, so she has seen all of the little developments too – exaggerated facial expressions, little gurglings and squeaks and some crazy leg-kicking sessions. (And that’s just me. Hohoho.) It makes everything so much easier and nicer when your baby starts to respond and interact – it feels less as though you’re just trying to keep this inanimate object alive and more like you have an actual baby, with a little personality. I find that every day is a bit more rewarding than the last, and I definitely feel less silly when I chatter away to her and call her by her name.

Sleep developments: on many nights, pre-six-weeks, Angelica was sleeping for five, six, even seven hours through the night, but for the past week or so we have had little feedings every three or four hours. Which doesn’t bother me, but it does seem like a step in the wrong direction when the holy grail seems to be this “sleeping through the night” business. To be quite honest, I feel rather too relaxed about sleeping and routine – I think because we are living in limbo, without a house, I keep putting off trying to organise any kind of routine until we have our permanent home. Everything is on hold! But with a baby feeding on demand, it seems quite difficult to do things at set times. Is eight weeks the right time to be introducing a routine? Do I even need to be trying to set a routine? What have other people found works best? My sister did bathtime followed by a set bedtime quite early on, I think, but Angelica is completely random! Probably because our lives are quite random – we never do the same thing every day and are alway moving from pillar to post…

Everything was going so well with my C-section scar. Ten days after the birth I was told that it had healed over nicely, three weeks after the birth I had my first bath (I had been showering, obviously, just not having baths) and it all seemed fine..

..until a couple of weeks ago when part of it just felt so sore and itchy and I had to have a look. (Using a series of strategically-placed mirrors so that I could see beyond my gut overhang.) It seemed that part of the scar had split (at which point, even typing that, I have a minor squeamishness-induced nervous breakdown) and there was some kind of little boil or ingrown hair IN THE SPLIT. Ugh. My fingers can hardly type I’m cringing so much. Anyway, after a week of antibiotic cream, it was still hurting (probably because the doctor poked it open with a swab stick, causing me to almost shoot through the roof of the surgery with shock) and so, not wanting to go back to be messed with, I changed my scar gameplan. Reading that scars needed cleanliness and dryness, I cleaned it with water daily and then afterwards lay on the bed for ten minutes with no clothes on (oh, the mental images – you’re welcome!) to dry out the area. I realised that my daily baths, followed by stretch mark oils, had probably kept it all a bit moist in the scar region. Drying it out seems to have done the trick. For now. I have my six week check (at nearly nine weeks – oops) tomorrow, so I’ll find out then. And obviously update you, because I can imagine that there’s nothing you want to hear more than the ins and outs of my c-section scar traumas,

What else? I still have a tummy that’s probably equal in size to a five month pregnancy belly, but the shrinkage seems to have plateaued. So I’m hazarding a guess that to get rid of the rest of it I’ll have to actually do some exercise, which fills me with abject horror. It has been ages. And I keep having baby-soothing injuries at the moment – I did my knee in doing little squat-bends to get her to sleep, and I pulled something in my back when I was putting her down in the pram! I’m like the crumbling man in that Bruce Willis film!

Mentally, all fine. I have to say that there’s the odd day when Angelica cries a lot and I feel a bit out of my depth – a few weeks ago she just wouldn’t stop screaming and my parents had gone on holiday and my husband was working in London and I just felt so alone. I ended up panicking and taking her down to A&E because I convinced myself there was something seriously wrong with her. Has anyone else done that? I felt so stupid when I got there, but actually, I’m glad that I had the peace of mind because I think that it was partly my own stress and panic that was making the situation worse. The doctor said that they see lots of babies all the time, and it’s always better to check if crying seems abnormal (also Angelica had this little rash that had been spreading) which made me feel a little less silly… I must do another post about this, because having spoken to loads of friends and family, it seems that lots of people have these horrific days now and again but find it hard to admit that they’re feeling overwhelmed and feel a bit embarrassed to ask for help. Is that a fair appraisal? Let me know!

Right. Another update in another month – I’m making a concerted effort to enjoy every single second of this lovely baby stage so if I can fit in an extra update in between then I will!