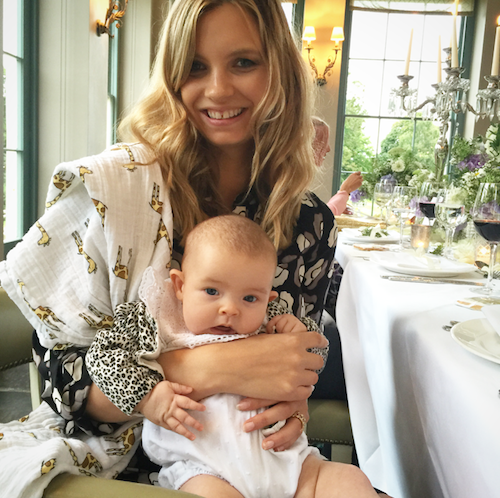 The three month update. I would use that age-old phrase the time has flown by, but actually, this month hasn’t. Probably because we’ve been waiting to move back into our house and every day has presented a new delay or obstacle, but also because there have been so many little changes with Baby Angelica and I’ve started to be able to tell one day from the next instead of them all running into one another! Let’s see what’s been happening in the crazy world of Mum and Baby…

Chewing, licking, kicking, dribbling, giggling, gurgling, sighing and, most importantly, rolling. Not often, and not all the way over, but Baby A has started to be able to propel herself sideways. No longer is she an immobile little heated package, she wriggles and kicks and – if you pop out of the room to grab something – it’s very likely you’ll find her in a completely different position to the one you left her in. I’m not talking acrobatics, here, but there’s some definite activity going on!

Over the past month I feel as though new motherhood has taken a massive turn; there’s a lot more proper “awake” time that requires interaction and a hell of a lot more effort and attention than the “feed, change, sleep, repeat” kind of routine that takes up the first month or so. Certainly there are less of the longer naps (finding the time to write these posts is becoming more difficult!) and trying to get tasks done when Baby A is awake can sometimes be met with furious objection on her part. An absolute Godsend, for me, has been the BabyMoov Swoon Up – review post coming soon – which is a bouncer with two height levels, one on the ground and one at adult waist height. 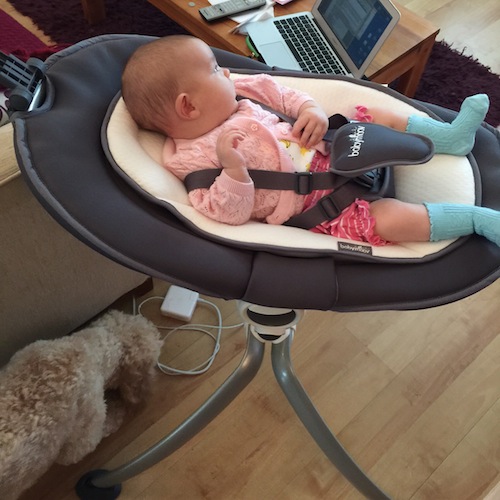 It’s high enough that the baby is out of reach of Dexter the dog, who likes to come and try to lick her – and she can see exactly what’s going on in the world, rather than being stuck looking at ankles and the lost socks and dust balls beneath the sofa. (It’s here online if you’d like to see more detail.)

Anyway, this extra-alert awake time was something of a shock to the system when it first happened, because I was used to this inert little bundle and then she suddenly opened her eyes and responded to words and started patting my boobs when she fed! No longer a little Tamagotchi but a proper, all-singing all-dancing tiny human. But how incredibly rewarding! Every smile, every bumbling bit of baby chatter, every tap of the hand or crazy leg-kicking session, they all have me completely captivated and I have to stop myself from recording minutes and minutes of footage on my iPhone, because when I watch it back it looks like some creepy silent movie. (Baby solemnly stares into the lens. In the background a kettle comes to the boil and a dog whines. Baby kicks left leg, yawns, returns to blankly stare at the camera.)

Sleeping is just as random as it was in the last update – sometimes three or four hours at a time during the day, sometimes no naps in the day, which are the days that I struggle with, and still no set bedtime. It never seems to fall before about nine o’clock – in fact, eleven seems to be the usual, but until we’re back in our house I can’t see any point in setting up a routine – we’re always on the move and car journeys tend to dictate the sleeping times. (She just can’t stay awake in the car! See post here.)

I’m looking forward to creating a lovely little bedtime routine with a warm bath and a song (need to learn some songs, at the moment I sing, in order of frequency, The Addams Family, Bad Romance by Lady Gaga and the theme tune to The Flinstones.) In the last week or so there have been no middle-of-the-night feeds, we’ve been getting a full six or seven hours of uninterrupted sleep, but I have to say that I didn’t begrudge the middle-of-the-night feed, really. I just used to slide Baby A over from the bedside cot, latch her on and semi-snooze my way through it! I found it rather lovely and comforting and – though I welcome a bit of nocturnal normality – I will miss it, I think. (Watch things change this week now – I bet I’ll be up at 2am, 4am, 6am….)

Now let’s talk about me! I’ll keep it brief: the gut is still there, though it is still shrinking and when I wear my very tight leggings, it looks almost (almost) non-pregnant. Which is great news. Boobs: nothing new to report, other than they go like rocks and start aching if I don’t do regular feeds. I did manage to express a bit of milk the other day (Breastmilk Diary post forthcoming) and felt very pleased with the old knockers, even if they are covered in veins and have saucer nips. (Note to self: remember to delete that sentence.) Having my hair blonded and trimmed gave me a bit of a confidence boost, appearance-wise, and I also bought myself some little ankle boots with a small heel in an attempt to feel a bit sexier. Which backfired, because the first time I wore them I did my knee in walking down some stairs. I’m like a cow when it comes to steps – fine going up, absolutely rubbish getting back down again.