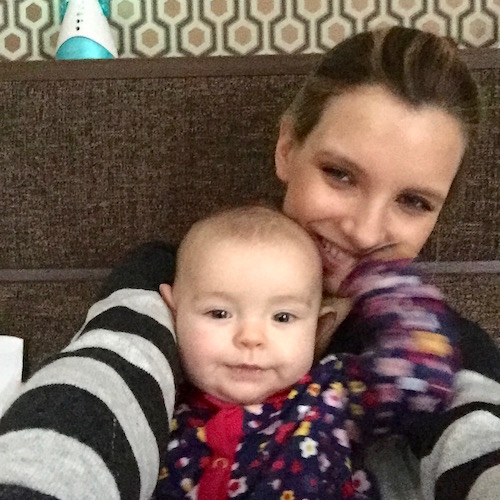 As I write this I am breastfeeding and being periodically smashed in the face by a small, perfectly formed hand. When they’re not trying to tweak my nose, the podgy little fingers are pulling on my bra strap, trying to free the nipple that’s not in use and winding themselves into my hair so that they can give it a good old yank. Yep. Welcome to five months: it’s like trying to breastfeed a monkey.

But what fun we are having! So long as I don’t try to get any work done, at all, time together is a total joy. And I mean that without a single trace of sarcasm – I absolutely love it. Add work into the mix and things can quickly get miserable; baby crying, then me feeling guilty then me feeling cross because CAN’T I JUST HAVE FIVE BLOODY MINUTES TO MYSELF?! The answer to that, obviously, is no.

The thing that I find most difficult, being an absolute workaholic, is the forced “downtime” that has to happen when I’m breastfeeding. I often do emails and admin (or write posts, as I’m doing now) but on the really long feeds (which I suspect are more for comfort than actual food) I can find myself getting frustrated. It’s something I need to address, really, because I need to learn to relax more and it would probably be the ideal time to have a quiet little meditation or something. I’ll work on that for next time… Meanwhile, here’s the five month “baby and body” update! 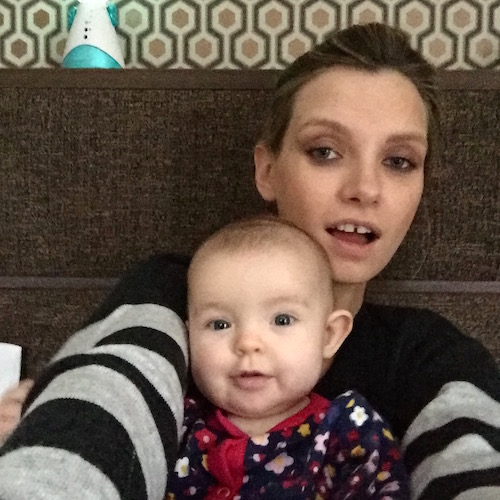 Oh, lots and lots of fun. No longer my little woodland creature, this impish, plumptious thing gurgles and waves her arms about and tries new screams on for size and kicks her legs and rolls about (not completely over) and gets cross if I leave the room. Or if daddy leaves the room. She still wants to feed a lot of the time and we still have a midnight feed, a 3am and a 6am, which is almost nearly perhaps starting to wear a bit thin, though I love our cuddles in the dark and will miss them when she starts to go for longer periods. We now have something resembling a routine, which goes a bit like this:

6pm: I start thinking that it would be nice if Angelica would go to sleep now

7pm: I do a bath and a feed and then, after about an hour, I try to slide the baby over into her Snuzpod

9pm/10pm: Angelica actually goes to sleep after hours of feeding/playing/laughing/feeding

So yeah, that’s our little routine and it works, kind of, for now. I’ve given up on trying to make her go to bed earlier, because it just means that I have to sit there in the dark for the entire evening and we both get more and more frustrated. We just muddle along. I’ve set a deadline – the New Year – for getting into more of a routine. It’s called the “Shit Gets Real” routine and involves red wine (for me), story-reading (from Dad) and a complete baby-no-go-zone from 8pm onwards! Pass me the Malbec..

On a little sidenote: I am absolutely not in any rush to a) get Angelica out of my bedroom or b) stop breastfeeding. I’ve had a few people who have been almost disgusted by this, making me feel as though I’m some kind of self-righteous bore, but I feel as though I will have the rest of Angelica’s life for her not to be next to me in the bedroom and not be breastfeeding. If those things work for me, is that something to be sneered at? She’s only five months for crying out loud!

I’ve honestly been quite shocked, too, by some people’s attitude towards me for actually breastfeeding at all! I’m by no means one of these blah-blah-isn’t-breastfeeding-amazing people, either – I just kind of get on with it. I find it convenient and – dare I say it? – enjoyable. But I’ve been met with an almost sneering sense of disbelief from some women – Mums – who, mostly, didn’t ever breastfeed. What’s up with that? Surely we are all on the same team here?! Can anyone enlighten me on why someone would actively dislike someone breastfeeding their baby rather than feeding them formula? I certainly wouldn’t ever judge someone who chose formula! Bizarre.

Nothing very much to report on the body front, actually: the boobs continue with their melon-like existence, still rather veiny and – er – full. The tummy has seen a bit of shrinkage over the last month, though I’m sure progress has been hindered somewhat by the fact that I have slipped into the habit of having a Honeycomb Magnum every single night. Oops. That and quiche for lunch and the odd can of Coke to keep me going in the afternoons… God, that makes my diet sound terrible – I promise it’s not that bad! Obviously the daily Magnum could be dispensed with, but one has to have a vice. Maybe by the six month update I’ll have kicked the habit!

Oh! I almost forgot – post-partum hair loss seems to have begun in quite a shocking way. You can probably tell from the fact that I nearly forgot to report on this that it hasn’t bothered me too much thus far, but it is quite a spectacular amount of hair falling out when I brush it. I’ll keep you posted – I think this issue deserves its own page, really. I’m toying with the idea of getting my hair a bit blonder to plump out the remaining hair a bit, and maybe a bit shorter, but we shall see. I’m wary of doing anything too drastic!