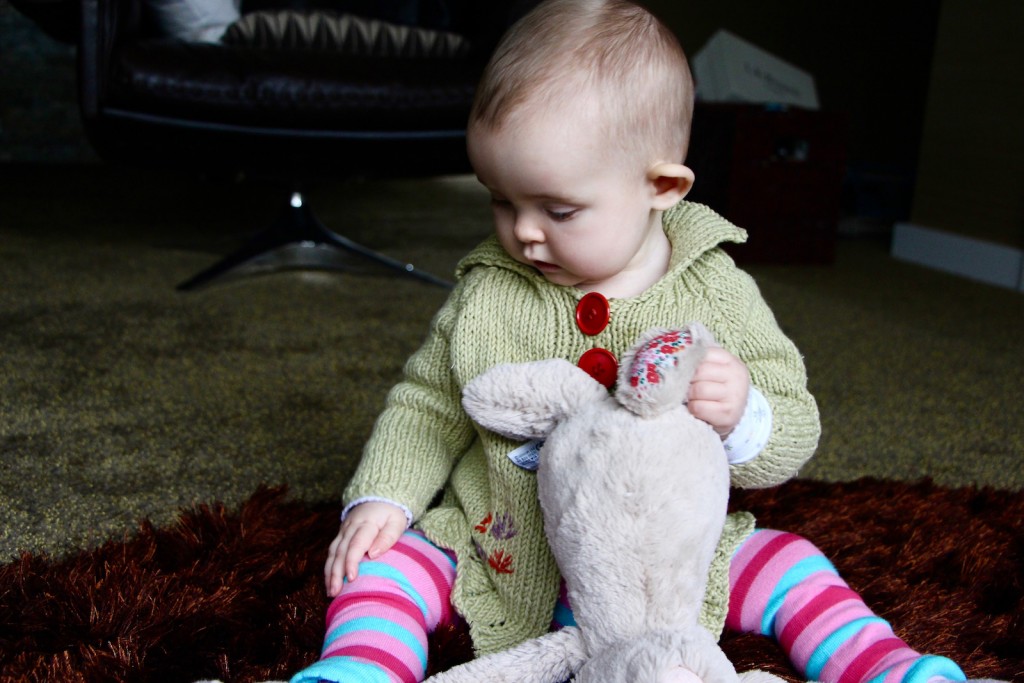 I’m writing this on the train because – as usual – I’ve run out of time and I have a proper thing about getting these update posts out on the right day. Fortunately I have one of those gargantuan iPhone 6+ things, so typing on it isn’t too bad, but my left hand does keep spasming (never written that word before!) so hopefully I’ll make it to the end of the post without causing serious repetitive strain injury. On that note, without further ado, here’s my 8 Month Baby and Body Update:

8 months! No crawling yet, but very nearly. Angelica’s rolling skills have reached quite epic levels with eight or nine-turn sequences occurring across the living room floor. It’s like watching some kind of deranged gymnastics show where the contestant has forgotten their choreography. “I’ll just have a roll about and hope nobody notices.” 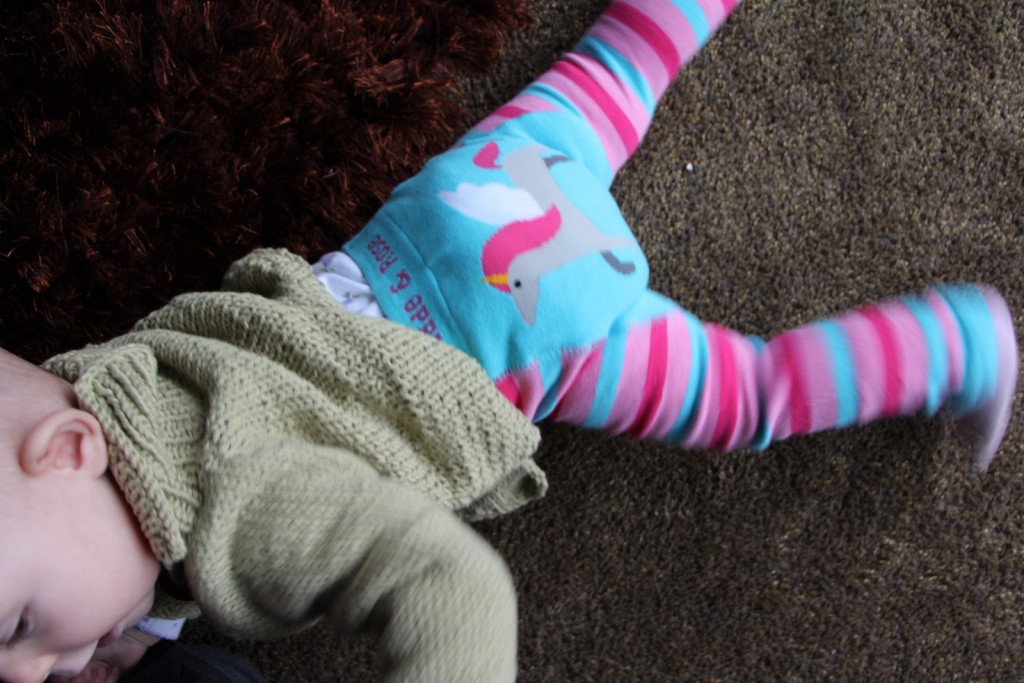 She rolls with the enthusiasm of an action hero dodging bullets; in her head I’m sure she’s imagining gangs of bank robbers chasing her – one second she’s smoothly commando-rolling to hide under a Lincoln town car, the next she’s rolling into the lobby of the corner store to await backup.. The concentration on her face is just something else! With her mouth folded over into a hard line, whole minutes of silent, intense rolling can occur before she breaks for a quick nonsense babble and munch on the chrome leg of the armchair.

What else? Oh. I’m probably a terrible parent for this, but I’ve basically been feeding my baby what I have taken to calling the “astronaut diet” which consists almost exclusively of pouches. Ella’s kitchen. Now look; I’ve tasted this stuff and the spag Bol and lamb dinner are actually pretty nice. I mean, I don’t know how much better my version would be, considering it’d be mushed up anyway, and on top of that it would take a whole load of time out of my already unmanageable day to make it. Time I’d rather spend playing and interacting. Now I’ll say this: I am at the end of my pouch craze because I have a Beaba cook machine and can’t wait to use it, but the pouches have been a total saviour. For being out and about? Perfect. I do the chunky food ones and not the “veg” purée which is about 70% fruit.

Oh and YES I have tried to give big chunks of “baby led weaning” stuff – veg and fruit and what have you – but it just goes on the floor. Every single time. So mush it is. I have my Annabel Karmel books at the ready and this weekend is cooking weekend! Fish pie (mush), pasta (mush) and sweet potato things (mushed).

When we are having feeding time, by the way, NOTHING is more interesting to the baby than Dexter the dog. Trying to secretly summon him to the side of the high chair seems to be the new game, with Dexter more than happy to play along. Sometimes the cat joins in and sits on the sideboard next to us and what a merry little band we make, the cat trying to catch the spoon, the dog waiting for debris to fall from the chair, the baby turning her head at the last second so that every mouthful ends up on her face. It’s like feeding time at the zoo!

I’m still breastfeeding; I tried a bit of formula topping-up to see if it would make a difference to the still-frequent night feeds but it didn’t. So I haven’t tried again. I don’t want to stop breastfeeding yet (I really enjoy it!) and don’t see the point in mixing unnecessarily if she doesn’t particularly seem to need the formula, because it seems to really mess with my milk production and makes it impossible for me to go anywhere on my own. I need to read up more about how to cut out a feed or two, maybe; or maybe not! I feel an immense pressure at the moment to stop breastfeeding, like I’m being silly to carry it on this long, because lots of people have been surprised that I’m still doing it.. I’ve just found it easier to do it than not, I suppose! Moving to formula would definitely free me up immensely to work in town more, but (if I’m being absolutely honest) I love the time I’m spending with the baby and quite like having an excuse to be at home as much as possible.

Baby is still in our room in her new big cot next to the bed (it’s a brilliant one from Mokee, post upcoming) but I think we will be moving her into the nursery soon because she wakes up really easily. Especially when “Mr Clonk-shoe Floor-creak Loud-sneeze” comes into bed. I will really miss her not being next to me, but I have a suspicion she will sleep far better without us falling over slippers and stepping on squeaky toys when we’re trying to navigate the bedroom in the dark.

Read about my (sort of) co-sleeping experiment…

I’m sure there’s more to report, baby-wise (new noises, new movements) but I’ll write about those things as and when they occur to me. Hair-pulling is quite a big theme, at the moment, as is doing massive trumps as she rolls around the floor. Those keep me amused no end. I could summarise the current baby experience by saying “I’m knackered, but I wouldn’t swap any of it for the world.”

Nothing too much to report here. The boobs are gradually returning to their pre-baby size, I think, though I said that to a friend the other day and she raised her eyebrows, so maybe I’m delusional. (In fact I am. I tried on an old bra the other day and couldn’t even get the clasps halfway across my back! But surely they’re less melon-like than a month ago?)
My scar seems to be healing nicely; it’s very red if I have a bath but otherwise quite pale and faint. Hopefully that’s normal – I haven’t looked it up online because Dr Google is a bastard sadist who basically tells you you’re dying whatever your symptoms are. I had a small pain in my groin area (it lasted for approximately thirty seconds – a mere twinge) but by the time I’d finished Googling I was convinced I needed to go to A&E.

Right – I started writing this on the train at 9.20am and am finishing up at 22.47pm: such is the way life pans out these days. (Note: I haven’t spent all of that time writing it, clearly! That would be insane.) I have loads of posts in my drafts and will work my way through them over the next week or so – stay tuned!

*the leggings in the photos are by Blade & Rose – my Mum knitted the cardigan!