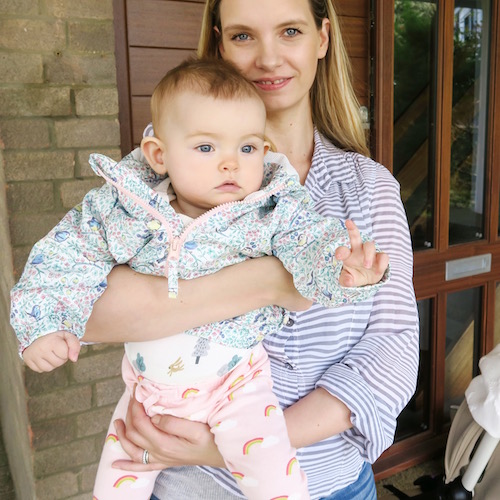 A month of discovery: if you put a baby down in a cot during the daytime then they might just nap. Who knew?! I mean, it takes a bit of perseverance at first, and there’s the mandatory sixty-second screaming session to grit your teeth through, but after that? People: WHY DID I NOT DO THIS COT-NAP THING BEFORE? It was the health visitor who prompted me to give the cot-nap thing a try; she asked

“Does the baby nap twice a day?”

“mostly, but only in the car or in her pushchair.”

“Not in the cot?” asked the health visitor.

“When did you last try?”

Erm, about six months ago? Ha! I suppose because I always breastfed on demand, we didn’t ever have a “routine” established and so putting Angelica down into her cot just wasn’t something I did once she was out of the newborn stage. For many months, she didn’t nap at all during the day unless we took her out in the car or in her pram, and I do wonder now whether or not she would have dozed off eventually if we’d put her in the cot and drawn the blinds and closed the door…

Anyway, no use crying over spilt milk because here we are at ten months and, for the past week, the baby has been having a sleep in the morning and then one in the afternoon – both for about an hour to an hour and a half. Epic. I’m getting so much done. I’m writing this during a nap, and in the last nap I edited a video and sent it to a client via WeTransfer. During yesterday’s naps I went through all of the products I’m testing that are lined up on the windowsill in my en suite and chucked out the crap ones, photographed the good ones and made notes on the ones that’ll make it onto A Model Recommends. I also managed a twenty minute disco nap on top of a pile of laundry.

Let’s see what else has happened this month, shall we?

Yes, so the sleeping thing is much better. Much. As well as a 7pm-8am main sleep (don’t hate me too quickly, she still wakes up – more on that below) we now have a couple of nice long naps. This must be what everyone calls “the light at the end of the tunnel”. No longer am I staggering around with unwashed hair, pant-less underneath my jogging bottoms and with huge milk stains around the chest area of my t-shirt. I get quite a lot done in the evenings – including washing pants so I can then wear them underneath my jogging bottoms – and I get a good eight hours’ sleep. Mostly. Some nights we have two wake-ups for feeds, but usually it’s just once. Never at the same time – it can be midnight, two am, four am…she likes to keep me on my toes. There were a couple of blissful weeks when Angelica slept from 7pm until 8am but – ironically – I developed a mild case of insomnia and had the crappiest sleeps ever.

The health visitor came around last week and told me that I should only really be doing two breastfeeds a day by now and that the majority of the baby’s nutrition should come from her solid food. Advice I followed, for a day or so, but the baby went off her solid food almost completely and seemed very quiet and odd. Er HELLO! A Googling session (why I didn’t do this straight away I don’t know!) revealed that this is not true for all babies and that until a year old they can still get a lot of their nutrition from breastmilk or formula*. For Pete’s sake! I’m back to feeding on demand, though really it’s just once in the morning, once in the evening before bed and then one at about lunchtime. Oh, and one through the night, but it’s only a mini one and I think that she could probably do without it, but I’ll tackle that little issue next week… 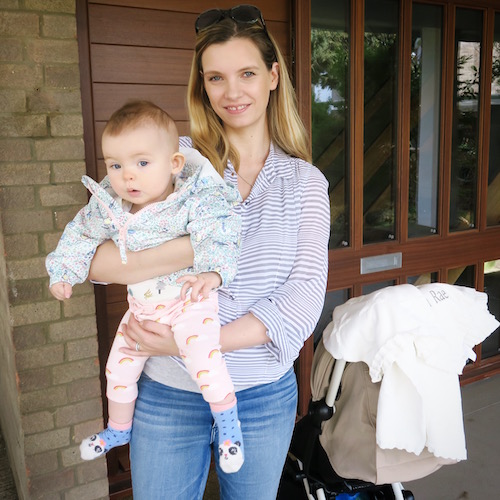 We do a proper breakfast, lunch and dinner – I must admit that I’ve been very lazy and relied far too heavily on Ella’s Kitchen pouches, but at least I’ve given her every single variety, so she’s tasted quite a few different flavours! (Trying to make myself feel better, there..) Large bits of food (steamed broccoli, bread, pasta, mango) just get chucked straight onto the floor, again and again, so although I persevere with these I use mushed up food on a spoon to make sure that at least some food actually goes into her mouth. I find that if she has something to hold, like a spare spoon or a chunk of bread, she’s much more willing to eat things. But I don’t think I have any major issues with the weaning side of things; I did feel a bit panicked when the health visitor said that she should be eating lots of things like toast and harder stuff, because she just refuses to, but then I realised that it was ridiculous to worry – as my husband says, have you ever met an adult who can’t eat toast? Ditto me worrying about the baby rolling and not crawling – have you ever met an adult who only rolls?

On the subject of rolling; we have lots of it happening, still, and some commando crawling too. It looks very strenuous indeed, this form of crawling – there’s a lot of grunting and moaning that goes with it. I don’t think it’ll be long now before she’s up and away, though rolling still seems to be the easier and more relaxing option. Can’t blame her – I often lie on my back next to her and it’s really very nice down there. Better than crawling, which I have also been doing out of encouragement/sympathy and now have two rough patches of red skin on my knees.

No new words – we’re still on Dada, AAAARGGGHHHH and UGHHH. I thought that “wow” made an appearance a few times today, but I never say “wow” and neither does my husband so I think it might just be a new sound rather than an utterance of joyous disbelief.

Enough about the baby, let’s talk about me.

A friend is coming to personal train me next weekend and devise an exercise plan for my baggy body. I can’t wait. Well, I can, I’m just lying and trying to sound enthusiastic. The truth is that I’m rather afraid – I tried to run up an escalator last week to catch the train on time and it almost – honestly – killed me. I thought I was having a heart attack at the top and had to hang on to the side of a metal noticeboard. I missed my train by fifteen seconds.

So, baggy body no more: I must invest in a good sporting bra this week to control my wangers, otherwise they’ll be swinging around my ears like one of those 3D models of the solar system.

*I know that all babies are different, which is why I’ve phrased things very cautiously above, but the main gist of things I’ve read is this “Aim for baby getting no more than 25% of her calories from solids by the age of 12 months (some babies eat less than this at 12 months and that’s also normal)” which is virtually the opposite of what I was advised. Again, everyone is different so you just have to go with your gut instinct, but if you’ve had the same experience or you’re interested in knowing more along these lines then there’s some  extra reading here…