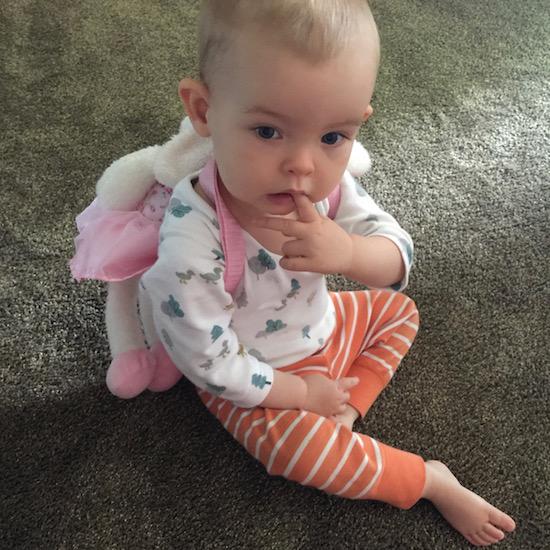 Thank you to the various people online who reminded me today that I needed to do a baby and body update – I hadn’t even realised that it was the 17th! And actually, loads of things have happened this month, so it’s a good one to write. Though I am trying to write it with a massive headache, the baby screaming as she has her dinner, the dog hurling a toy crocodile around the kitchen and the cat climbing to try and catch a spider that’s crawling across the ceiling. It’s like trying to work during a circus rehearsal.

Let’s get on with the show!

Lots of things have happened this month. The baby is almost, almost walking. She holds our hands and then quite literally throws herself across the room, faster than I can keep up. It started off as a funny drunk man walk but has developed into something quite accomplished. I don’t think it’ll be long before Angelica is racing around all on her own, which brings a whole new set of health and safety horrors into play. Good God. We’ve already had a near miss with the corner of the coffee table, which is about to be banished to my husband’s office AKA The Dumping Ground, and there have been a few clonks of the head on the kitchen tiles. 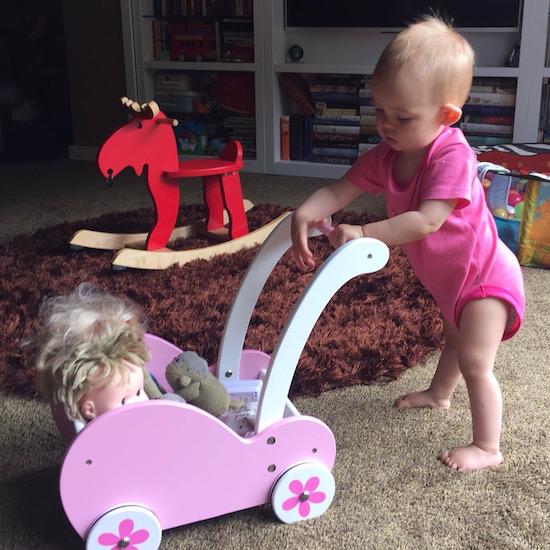 Baby’s new trick (I suppose I’ll have to start saying toddler, soon?) is to take the remote control for the television and demand, by making monkey sounds, that we play Curious George. I need a whole other post to write my thoughts on Curious George, and also on Peppa Pig and Ben and Holly’s Annoying-apart-from-Nanny-Plum-and-The-King-and-that-old-elf-bloke Kingdom. But suffice to say, for now, that I don’t really enjoy more than ten minutes of Curious George – it starts to make me feel as though I’ve been lobotomised and woken up on drugs all at the same time.

Eating is interesting – lots of finger foods going on, but we still force down a chunky pouch of Ella’s Kitchen at lunch and dinner (most of the finger food lands in the dog) and so our total Ella’s Kitchen bill is probably, by now, around seven million pounds. If I could turn back time and buy shares in a company… But the pouches are being gradually removed from the equation and replaced with various bits of home cooking, ham chunks, cheese bits and slices of toast. Vegetables seem to be a no-go and were right from the start, but anything meaty or cheesy goes straight down the hatch.

Someone asked on Youtube whether or not I was still breastfeeding: in case you missed my posts a while back, I stopped just as Angelica turned one. She now has 200ml of normal milk in the morning and 200ml at 4pm (random, but it works for some reason!) and none before bed. Lots of yoghurt, too – she likes the plain Total yoghurt, which I add a little bit of fruit puree to because it’s rather sharp. I do still miss breastfeeding quite a lot, which might sound silly, but I really enjoyed it. I sort of wish I hadn’t stopped – I don’t feel that it really afforded me any more “freedom” or “getting back to me” and I cherished that little morning time we have together. I suppose I’ve substituted that snuggle for a different one – Angelica gets into our bed to drink her morning milk and she likes to rest her little legs on us and curl into the crooks of our arms, so all is not lost! 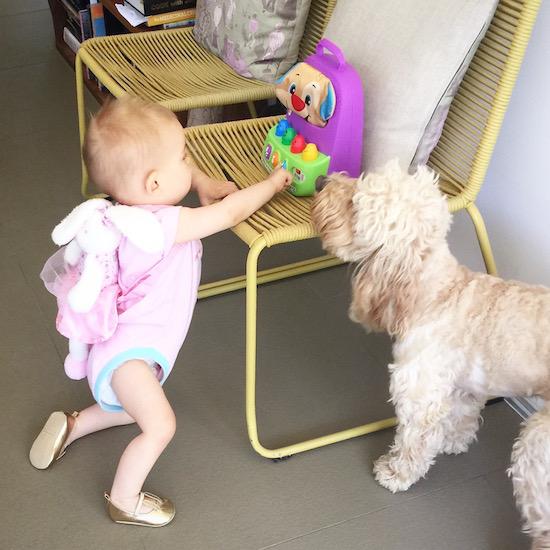 Oh yes – cuddles have become a “thing” and so have kisses! I can get them almost on demand, so long as the baby’s not: trying to walk, playing with the remote, looking out of the window, climbing onto the sofa, tearing up my important expenses receipts, ripping parts of her pop-up book and throwing them into the ball pool, wiping peanut butter in her hair. Other than those times, I can definitely get a cuddle when I want it. Daddy gets the kisses, I only get one if it’s very late and she’s very sleepy – I have to win them using trickery. Huh.

In summary, lots of changes – she’s really turning into a proper little human, one who knows what’s going on and is able to react to things and (sort of) say what she wants and doesn’t want. It’s very rewarding and I enjoy every minute. (LIES! I enjoy most minutes, but now and then I do lie on the rug and say JESUS CHRIST! I JUST WANT ONE MINUTE TO GO THE TOILET AND THEN I WANT TWENTY MINUTES TO HAVE A NAP AND GET MY BRAIN SORTED!)

I don’t know why I’m continuing with this particular section – there is absolutely nothing to report apart from the fact that I have been eating far too much buffalo mozzarella recently. There is a tub waiting in the fridge right this minute, ready to be gobbled down with a tangy tomato salad, fresh basil and a drizzle of peppery olive oil. Bring it on.