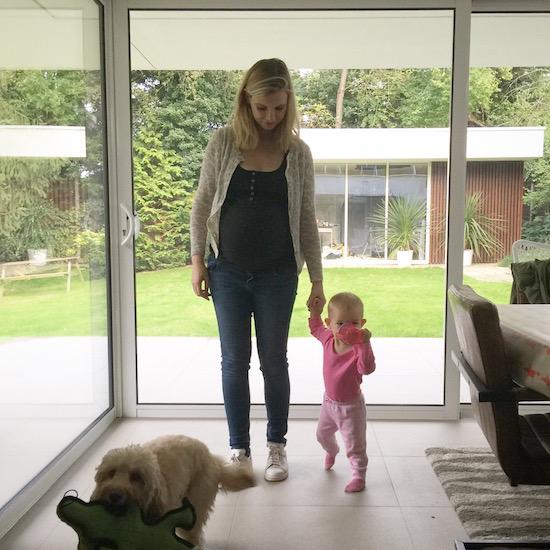 This is the first “baby and body update” I’ve done since my pregnancy announcement, and I’m trying to remember all of the things I wanted to say but couldn’t. Like, on Angelica’s One Year Update: Oh my God you won’t BELIEVE this but I’m pregnant again! Or on the 14 Month Update: I’m so ridiculously tired and ill, it’s really quite hard to cope.

The day I found out I was pregnant seems so long ago now – really a distant memory. I had thought that this pregnancy was whizzing by, but actually it has been ages already! The whole summer and now into Autumn and I still have a few months to go… But there are the pregnancy diaries to read for all of that jazz – let’s concentrate on the star of the show, here: Angelica the Walking Wonder.

Yes, we have had steps. Only a few wobbly ones (and a terrible face-plant on my Mum’s wooden living room floor, which sort of set things back a bit) but we are definitely walking. Walking with just one hand held, most of the time, but lots of climbing up on things and doing weird squat movements to pick things up off the floor and then crazy U-turn manoeuvres and sudden manic sprints across the kitchen. (Which is fun when you have a massive bump to contend with! Why can’t someone invent arm extenders so that you don’t have to lean over so much? It’s an absolute killer! I’m going to need physiotherapy on my back before the month is out!)

It’s been quite a month of developments, actually. It feels a bit as though I’ve been living with an alien from another planet, and after many months of them absorbing information from me and processing it in their alien brain they have finally begun to communicate. I can give instructions – “can you find your socks?”, “can you take off your cardigan for mummy?” – and I can sort of work out what Angelica wants when she points to things or makes certain strings of noises. There’s a bit of frustration and lots of “you want the cereal? No? The water? No? The book? The…tea towel? OK, the tea towel!” but it’s amazing to think how fast things change.

And so many moments really make me laugh out loud – yesterday I told her not to touch the radiator because it was hot – “HOT!” – and she started blowing on it to cool it down. I love watching how her thoughts evolve and when she suddenly understands a new word – elephant, shoes, keys, robot – it feels like the biggest achievement in the world. Sod climbing Everest, I’m on top of the world just knowing that my baby recognises a giraffe in a story book! (To be fair, I’ve been drilling the zoo and farm animals into her at any given moment. She must think I’m deranged. It doesn’t help that nearly every one of her books is preoccupied with zoo animals. Though – note to publishers – a puppy is not a zoo animal. I’d say that a puppy goes into the “pet” category, or at a stretch, “farmyard”.) 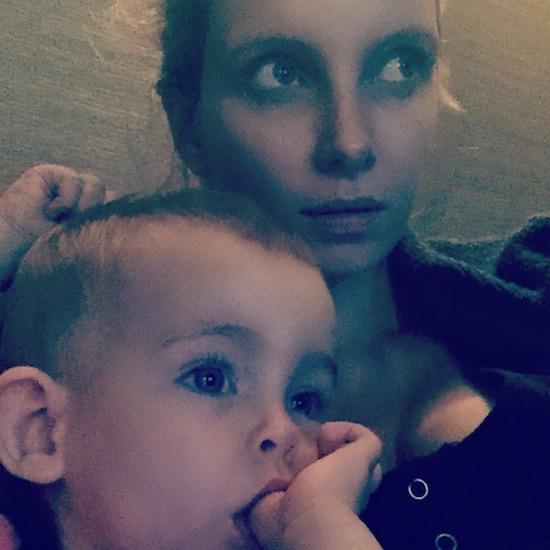 One thing: I feel as though I’m relying a little too much on Curious George at the moment, when I’m on my own and I just can’t even think about getting off the sofa! (TV show with a cartoon monkey and a man in a yellow hat. Watch it. Netflix.) I don’t ever do more than about twenty minutes, it’s not as though it’s all day – but it still makes me feel really guilty. Like I should be making Bonsai gardens with her or whittling her a violin. But when the pregnancy tiredness hits, there’s no escaping it – I don’t trust myself to even carry her down the stairs let alone go out of the house! – so sofa time it is. Does anyone else ever feel guilty about little TV sessions?

(Sidenote: you can learn a lot of very practical things from Curious George – I now know how to build an igloo, a squirrel house, a rudimentary vending machine powered by cats and I know what to do if I get snowed in but still need to do my paper round.)

In summary: we have nonsense-chattering, wobbly-dancing, bits of singing and frequent shouting-at-squirrels sessions – it’s a lot of fun. I like the fact that the fun factor increases along with the amount of work you have to do to get through the day – it’s like a sort of consolation prize. I suppose that the down times are when they are more work than fun (terrible twos?) but at least everything is just a phase. (Repeats mantra manically.) 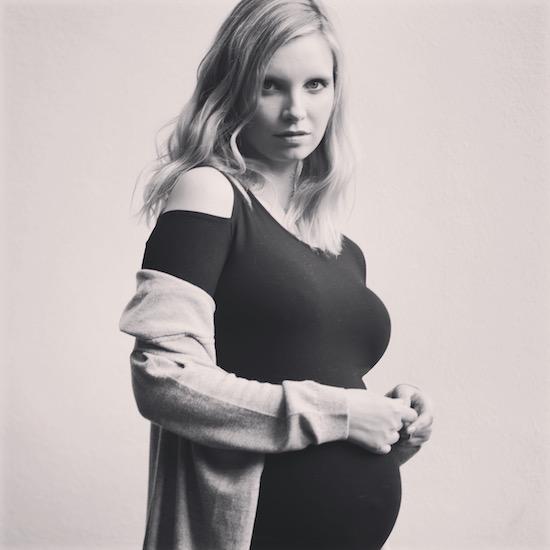 Ah, the body. I’ve obviously had to keep my true body updates under wraps, but it’s safe to say that it is not back to normal. I don’t think it had even left the post-partum stages before I got pregnant again – there was still a fair bit of belly to get rid of and my boobs – because of breastfeeding – were still rather large. Interestingly, when I stopped breastfeeding (Angelica was almost exactly a year) my boobs went a bit like empty socks for a few weeks. It was pretty alarming. But then I think the pregnancy hormones kicked in and they went all nice and round again. Which means that I am going to have to breastfeed and/or be pregnant for the rest of my life if I want to avoid the empty sock syndrome. Oh God. Tell me it’s not true!

As for the rest of the bod, it’s a bit larger, I think, than when I was pregnant with Angelica – baby weight on baby weight, I suppose – but I was pretty slim to start with and so I’m not overly worried about getting back in shape post-baby-2. I’m actually rather looking forward to it, though I know realistically it’ll be about a year from now before I even consider getting myself in gear! Strangely, considering that I made a career from my appearance, I’ve never been bothered by the body changes that pregnancy has so kindly delivered – perhaps because both times I’ve been so utterly grateful just to have a healthy pregnancy, but maybe because I’m so awed by the amazing things that my body can do. Carry a baby! Bloody hell. It’s quite a feat. Who gives a flying crap if my thighs look like cottage cheese for a while. I don’t. Sock boobs, that’s a different matter, but, as I said, I’m just planning a lifetime of breastfeeding. The poor kid will be, like, “Mum! I’m nineteen! I just want to go to the pub without you turning up to feed me!” Hohoho…