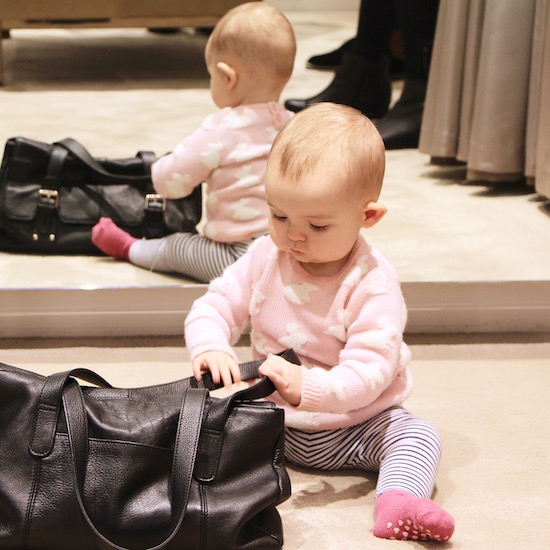 Oh, so many changes this month. It’s an exciting milestone too, the nine month one, because it’s “clothes-size-change month”. Which means having a proper excuse to buy more baby clothes because obviously everything is now completely the wrong size all of a sudden and the baby must have a whole new set of things which requires me browsing the internet for hours and mooching about in M&S and John Lewis and Mothercare and cooing over little leather pram shoes and dungarees and items that will be a nightmare to take on and off for changing nappies but will look cute. Shallow, I know, because I should be banging on about the wonders of child development, etc etc, but by God baby shopping is addictive. I get more excited about miniature clothing than I do about my own!

Also (pretending to be a proper parent now) it’s so satisfying when you move to the next size, because (though obviously clothes sizes and baby development aren’t intrinsically linked!) it’s a reminder that things are always changing and there are going to be loads of new things that happen. It’s like advancing a level on Sonic the Hedgehog. You just get used to one level (tiny baby! 0-3 month baby! 3-6 month baby!) working out where the pitfalls are and knowing exactly where to jump to collect the most coins (?!?) and then all of a sudden you’re thrust into this whole new baby world. And you think, what in God’s own name am I supposed to be doing now? Only time will tell. Let’s get on with the update.

Firstly, the baby is waving. Waving! I know that on the scale of things this perhaps won’t be the most important skill she’ll learn (unless she wants to be a traffic controller) but the first time I said “wave”, and she waved, was quite possibly one of the best moments of my whole entire life. It was like discovering an alien life form and the alien saying “hey there”. Houston, communications are all systems go.

Secondly, the baby has started to sleep through. This is epic. The strange thing is that before she was sleeping through, and I was still getting up three or four times a night, I felt as though everyone else with babies had managed to get theirs sleeping from 7pm-7am. Now that mine is sleeping, I feel almost embarrassed about it, as though everyone else is suffering and I’m Mrs Smug Pants. Please believe me when I say that I am far from smug – it’s just a pleasant mixture of disbelief and utter relief. Tainted, I should say, with the fact that I’ve developed a small bout of insomnia which will surely pass, especially if I start having a bit of red wine before bed. Purely medicinal. Will everyone throw rotten vegetables at my head if I also say that – maybe I should whisper – I actually really miss the baby when she’s asleep? I have to resist the urge to go tiptoeing into her room to watch her sleeping. The only way I stop myself is to imagine how I’d feel if I opened my eyes from a deep slumber to see someone lurking over me. Especially someone lit by the glow of their iPhone screen, wearing a Shu Uemura sheet-style face mask.

Weaning continues to go well, if by “go well” you mean “the baby really likes Ella’s Kitchen pouches” and “the parents still haven’t really got their heads around cooking things for a small being who will just chuck it all at the white walls”. I do try lots of different bits and pieces, but I worry that she’s just faffing and not eating and she does so love the spaghetti bolognese pouch. She eats mountains of that compared to anything else. I’m trying to introduce larger pieces of green stuff, but so far the dog ends up getting about 98% of it. Experiments with porridge, cereals, fresh fruit and natural yoghurts all end up the same way – Mango Baby Brekkie pouch goes down a treat. So what’s a woman to do? Tonight I’m trying a bit of (mild, no-salt) lamb curry. I’ll update you. It could be explosive.

No crawling yet, but the rolling continues to go from strength to strength; if rolling happened to become an olympic sport I reckon I’d have a gold medalist on my hands. Her rolls are almost too fast for the human eye to distinguish, no longer can I browse ASOS and be on “roll watch” at the same time. (Don’t lie, you’ve done it.)

And we have something of a routine. I doubt it’s perfect, and it doesn’t happen at the same time “to the minute” every day, but it has made life slightly less chaotic. Up at 7.30am-ish for a quick feed (still breastfeeding, unless we’re out or travelling in the car, when a bottle of that ready-made Aptimil is a total lifesaver!) and then a bit of a lounge about in bed playing “plastic duck on my head” (don’t ask) until 8. Breakfast at some point between 8 and 9, then playing until 11 when I turn on this weird music from Youtube and wait for her to have a nap. She never naps in the cot, always either in the pushchair or in the living room in the Swoon Up bouncer, though she’s probably a bit big for that now, so we’ll have to find an alternative soon…

Then, another feed, lunch at about one, playing until 3 and another nap. Maybe only half an hour, an hour tops, but this one is usually in the pushchair when we’re walking the dog or – my favourite trick – in the kitchen with the extractor fan on full power! I find that if all else fails, I start cooking, extractor fan whirring away, and within ten minutes she’s asleep. This is the baby who didn’t nap for months and months – it seems that a bit of perseverance pays off. In this case, at least. (I also love an app called Sound Sleeper – it has a noise called “Market” and that one works wonderfully in the evening if bedtime is becoming a struggle.) Dinner at 5.30/6, bath at 6.30, bed by 7. Job done.

I make it sound simple but of course, this daily routine is thwarted on a regular basis – car drives that lull the baby into a three hour nap, visitors who delay bedtime, trips to friends’ houses that completely rejig the timings… We’re not rigid, and I always used to roll my eyes when parents talked about routines, but my God it makes things so much easier. I feel as though I have more time and more control over my life. The next step is to get someone to help out for two days a week so that I can work properly – it’s almost impossible working from home when you want to spend all of your time with your baby. And trying to film beauty videos when you have a baby trying to eat the makeup brushes isn’t ideal…

This is probably too much information but – how shall I phrase this? – the Lady in Red has returned to the building. Aunt Flo has risen from the dead. The town has had a repaint after a long, unpainted hiatus. And along with the return of this monthly annoyance, a bout of not-so-great skin. Now during pregnancy (last bit) and new baby, my skin has been the best it has ever been in my life. Clear as you like, not a spot in sight and with a delicate, almost translucent quality. Bit dry, but I can cope with that for a spot-free existence. Now? There are a good few pustules I’m trying to keep at bay. It’s worrying. It’s like those zombie films where they’ve barricaded the absolute shit out of the house, but there’s a little gap at the top of one window and you see a zombie eye through the chink in the curtains and you know that – sooner or later – it’s game over. The zombies will infiltrate the building.

Hopefully it’s a small bump in the road – only time will tell. Boobs are still on the shrink, I reckon, though a photo of me from the other day flashed up on the computer and I looked as though my chest had been inflated with a tyre pump, so maybe I just have some kind of chest-dismorphia.

That’s enough overshare for one month: see next time. Maybe we’ll have some crawling going on!