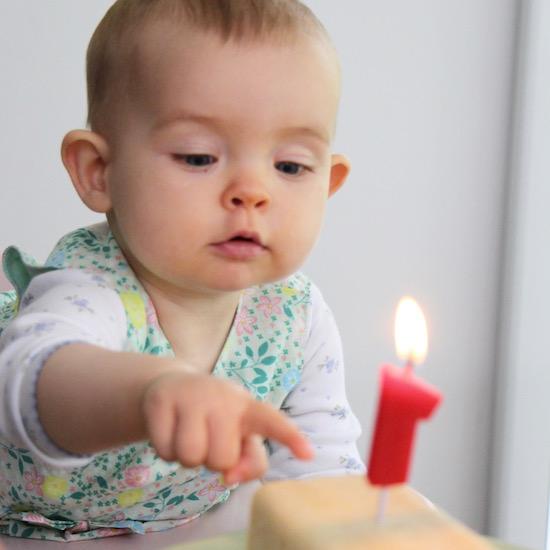 Wah! One year! This time exactly twelve months ago (approximately 11am, as I write) I was lying on a trolley in the maternity unit, crying because I had done twenty four hours of early labour followed by a complete cease-fire in the contractions department, followed by a show of meconium, followed by an internal inspection and the announcement that my baby was, in fact, breech, and that due to various factors it was recommended I have an emergency C-section.

But I want to have a water birth with my snacks and my music! I wailed. Labour wards are bad! C-sections are only very rarely necessary! I moaned. Along with other bumph I’d read in my natural birthing books, which made the doctors roll their eyes and the duty midwife stomp off muttering swear words under her breath. Not that I’m criticising the natural birthing ideology, not by any stretch of the imagination – I wish wholeheartedly that I’d been able to breathe the baby calmly down my canal and out through my “love petals” – but none of that reading prepared me for medical intervention. It just said that I wouldn’t need it.

Anyway, all but a distant memory, because here I am a year later and we’re all in one piece. What a fabulous journey it has been so far – I’ve learnt so much about myself and pretty much nothing about babies. I can categorically say that I have one hundred percent muddled through. I don’t think I read a single baby book, apart from the breastfeeding one I read in the first few weeks and that parenting one I read when I was pregnant. I have stacks of baby development books and baby weaning books and baby sleep books – not one of them have I opened. And in a way I’m rather pleased about it – I’ve just gone with the flow rather than filling my head with rules and regulations and other people’s experiences and it has worked brilliantly. Yes I have Googled things, on a regular basis, so I suppose that counts as reading books sort of, but mostly this year has been a year of trying to stay calm and texting friends and family for reassurance if needed.

The fact that the baby is still mostly on astronaut food pouches should be ignored, as well as the fact that quite often she still spends the day in a babygrow (IT’S COMFY!) but her weight is good, she’s as tall as a bloody beanpole and seems relatively pleased with her lot. What more can you ask for?

Let’s go in for the twelve month update…

Angelica is very into her books. This is a new development, over the last few weeks – she loves them! Preferably pop-up books or books with flaps, but if there’s any sort of book lying about (even pamphlets for Brexit and takeaway menus) then she’ll make a beeline. I will do a post on her favourite books if anyone’s interested – I’ve bought loads and have to say that some have been a bit rubbish, and it’s hard to tell when you order from Amazon. 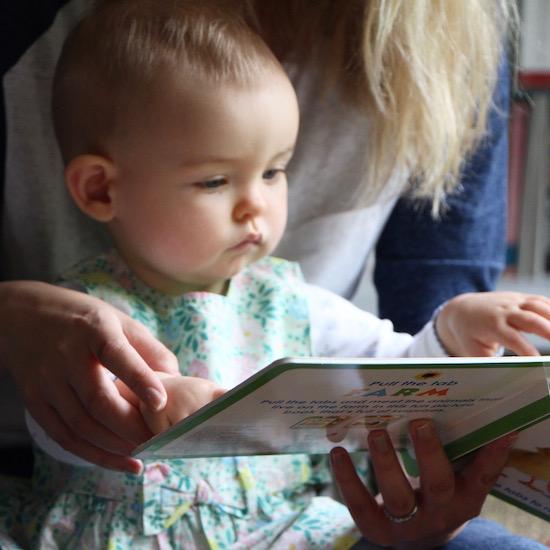 Crawling is going strong, but we now have some walking happening so long as hands are held. It’s very wobbly progress and she looks like I used to after a night out, staggering from side to side and generally looking lairy. (See below, “Body”.) Her favourite thing to do at the moment is to hunt for my iPhone, so I use it as a bit of a carrot on a stick, getting her to pull herself up and climb onto the sofa. 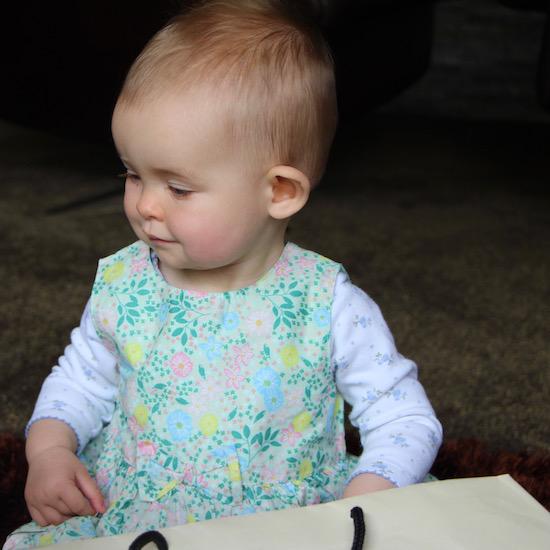 No words, yet, but a lot of babbling. Dadadadada. Wow! Oooohhhh! De-de. (Which I think is Dexter, because she only says it when the dog’s about.) She’s often a very calm and watchful baby; she’ll sit very quietly in her pushchair for a long, long time without wriggling to get out, and she’ll just stare and watch the world go by. Though she has her manic daily episodes, with high-speed crawling and banging things about and kicking at doors and laughing like a lunatic.

On the feeding front, she still loves the big chunky Ella’s Kitchen pouches. Supplemented with hunks of bread, cheese, fruit, whatever I have in the fridge, but until recently anything handheld just went straight onto the floor! Cheese and bread are the definite winners – I need to work on the veg situation. Oh and melon. She loves melon. It’s about time that we did one gigantic household diet overhaul, really, so I’m looking forward to cooking new things that we’ll all enjoy eating. I tried, last week, to get her to eat some steamed salmon and veg, but it was a definite no-go. Today, Birthday Day, I might see how she gets on with tuna. And a bit of hardboiled egg. I wonder what she’d think of asparagus? Good God, imagine the nappy after that!

I think that this might be the last body update, because there’s nothing new to report apart from my stopping the breastfeeding. (See yesterday’s post.) I’ve been trying to work on my split abs, but nothing is changing very fast (I wrote about my abs on my main website here). I think it will be a longish process and I’m not expecting overnight changes and I have decided, in the last few months, to just be really kind to myself. I rarely stop and relax, I’m always on the go, always trying to do MORE and BETTER and I don’t think that it’s a particularly healthy way to be. Having a baby takes it out of you more than you realise, I think, and I’ve tried to add having a baby onto my usual workload, rather than accommodate it by cutting down on other commitments. Idiot! That way madness lies! More relaxation for me.

I tell you one thing that has been really quite life-changing, though: not drinking. I mean I’ve had the odd bit, one night I even had three glasses of wine (check me out!), but drinking alcohol has become something very, very occasional rather than the norm. I used to love having a glass of red in the evening and would regularly go out to dinner or to someone’s house and drink just a bit too much. My hangovers were always horrific. I don’t think that I actually have the right constitution for lots of booze, though I liked to think that I did. So yes; no hangovers. Really quite marvellous. My general health has been a million times better and I find it easier to manage stress – I don’t need a glass of red to wind down, I just need to turn off my iPhone and my laptop and lie down with my eyes shut! I’m not saying that I never drink, just that it doesn’t figure in my normal life. I don’t think about it, really. The odd glass does me just fine. (Ha! I’ll be interested to see my status update in another year’s time. I’ll probably be writing it with an empty bottle of Malbec beside me!)

Right-o, there we go then. One year. I should take this opportunity to thank you all for reading and commenting – your anecdotes and advice have been a great source of entertainment and, on a more serious note, information and support. And there has never been a jot of negativity or judgemental tone or unfriendliness – I’m really grateful, truly. Here’s to year two!

You can read all of the previous monthly baby updates here….