Sorry that this post has taken so long to appear – I kept adding to it as I used the products more and more. I’m sure that I’ll have more to say again in a month or so!

I’ve had lots of people asking me what I went for in terms of cot, pram and car seat – the main, big baby purchases that tend to cost the most money. They also take the most researching – I spent hours and hours looking at pushchairs and moses baskets and various sleeping solutions. But here’s what I chose in the end; thank you to the many readers who passed on their own experiences with various brands and products – you’ll see that I did listen, and your prior knowledge was invaluable! 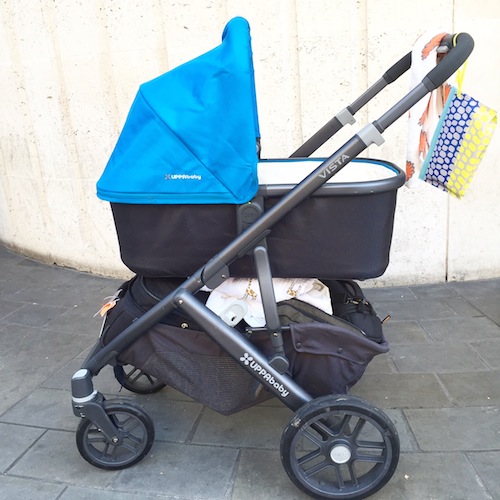 After approximately fifty-five thousand hours of online research and in-store testing, I narrowed my pram choices down to two: the Uppababy Vista and the Bugaboo Bee 3. So many twitter followers championed the Uppababy* – I hadn’t heard of this brand before then. When I tested both prams in town I found that I loved the Uppababy for its chunkiness and all-round brilliant design, and I loved the Bugaboo because it was so incredibly light. However, after much thought I decided that the Uppababy would be more suited to my needs – more rugged, with bigger wheels and a more substantial cot part. (Bassinet? What’s the pram bit called?) The Bugaboo would not have survived my off-roading craziness (I’ve done fields and all sorts with the Vista!) and I also didn’t like that the newborn baby part (a kind of soft bassinet) was quite unstructured and required the baby to be strapped in. I preferred the bigger, more solid bassinet on the Uppababy and I often use it to pop Baby A down for a nap during the day. It’s one of the only pram bassinets to be approved for overnight sleeping, apparently, and it has a proper ventilated base and nice mattress as well as a hood with a built-in pull-down UV shield, which I’ve only just discovered and think is genius!

Obviously I haven’t tried the buggy part yet, because Angelica isn’t old enough for it yet, but it looks really well-designed and feels equally as robust. As for the frame that the seats click onto, it’s very strong and it has the most enormous storage basket that’s easy to access. You could almost fit an adult into it! (Almost. I won’t be trying that again.)

The Uppababy comes with everything you need – insect nets, waterproof covers and so on – and even has the adaptors for clicking a car seat into place, which I think is a nice touch. The only downside with the Vista is that the frame is pretty heavy – nine kilos for the frame and another four for the carrycot. However, in comparison to some of the slightly lighter prams (the iCandy or the Oyster for example) the manoeuvrability is excellent – it feels as light as a feather, accomplishing 360 turns and complicated supermarket aisle-weaving! It’s kind of like a sumo-ballerina – massive heavy chassis, but incredibly light on its feet. My sister, who has the Oyster, was incredibly impressed when she pushed the Vista. We both also loved the fact that the seat or carrycot was quite high up, whereas with the Bugaboo Bee the baby feels very far away from you and close to the floor. Overall, I love the Vista for its chunkiness and robust build. If I was on and off buses all day long then I would probably go for something a bit lighter, but for my walks it’s perfect.

You can find the Uppababy Vista at John Lewis – it’s £699.95 and the colour that I have is exclusive to them. I’ll be doing a more in-depth review with lots of photos very soon! 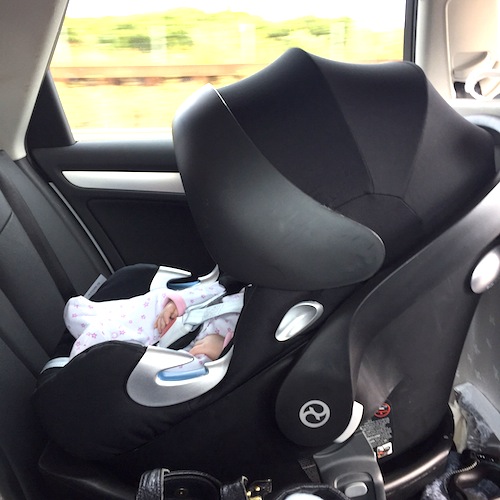 I left the car seat research up to my husband, mainly to give him something to do because he was moping about. He did lots of online research, but in the end (ironically!) he went with the suggestion from the lady in Mothercare who recommended the Cybex Aton Q. It had a brilliant design that laid a newborn baby as flat as possible, which we both thought was great, and my husband was won over by the weird stabiliser shock absorber things that pulled out of the sides. A definite unexpected bonus was that when we pulled the sunshade out for the first time, we saw that the car seat was probably the most stylish one you can find – it’s like a HR Geiger design! You would never know it from most of the online images because they all show the canopy down – if I were Cybex I’d be pimping that canopied picture out left right and centre, because I’ve never seen a nicer seat! Obviously I went all black with my colour choice – very Karl Lagerfeld, dahling. This seat has been specially designed to cocoon tiny or premature babies and then adjusts so that it fits babies up to the age of about 18 months.

You can get the Cybex Aton Q for £179 at Mothercare.com – we also bought the Isofix base (here), which slots into your car seat (check your make and model for compatibility) so that you can just click your baby seat in and out without having to faff around with seatbelts. 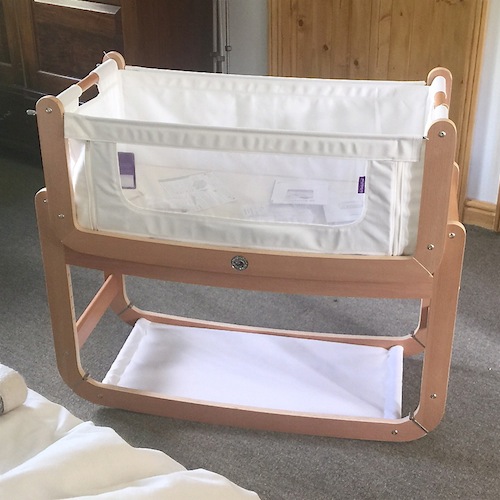 See here for a full review of the Snuzpod. This was the most controversial decision because my cot was going to be a present from my Mum and so there was – how do I phrase this? – helpful outside input. I wanted a bedside crib, which I think is kind of a new concept – they attach to the side of your own, adult bed, and have a removable side so that the baby is almost sleeping with you, but has her own space. (The idea is that you can relax knowing that your baby is right next to you, but if you’re absolutely comatose with tiredness you don’t have to worry that you’ve got the baby out of the way of the duvet or that your pillows aren’t going to flop down over them or something!) 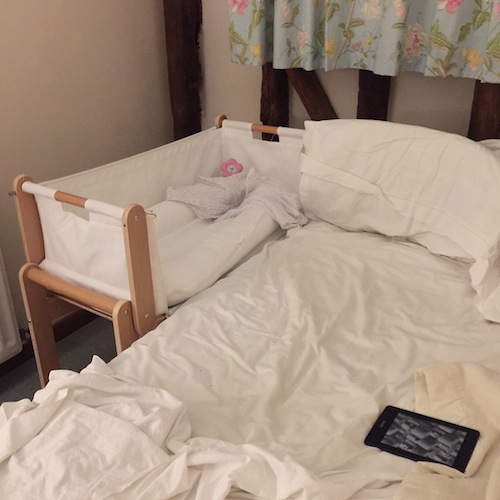 Mum bought me a Snuzpod, which was my favourite of the bedside cribs. It had a great range of heights that you could adjust it to, which I needed because we were moving between holiday lets and my cousin’s flat and my Mum’s house, so all of the beds were different, and I really liked that the side panel of the cot could be easily rolled up or down, creating a more secure cot for the baby if you wanted to leave it unattended. Not that a newborn can roll anywhere, but these things do cross your sleep-deprived mind!

The Snuzpod is available at The Little Green Sheep – it’s £169 and can be used up to about 6 months. I use my Sleepyhead “baby pod” inside it, which I think has been my most-used baby item so far. It’s amazing! I’m doing a separate post on it, but if you want to read more then they have it at John Lewis, or just Google for about a million rave reviews!

*Uppababy very kindly sent me the Vista above for review purposes. I was intending to get a “comparison” pram and do a video, but life has taken over and I haven’t got around to it yet!