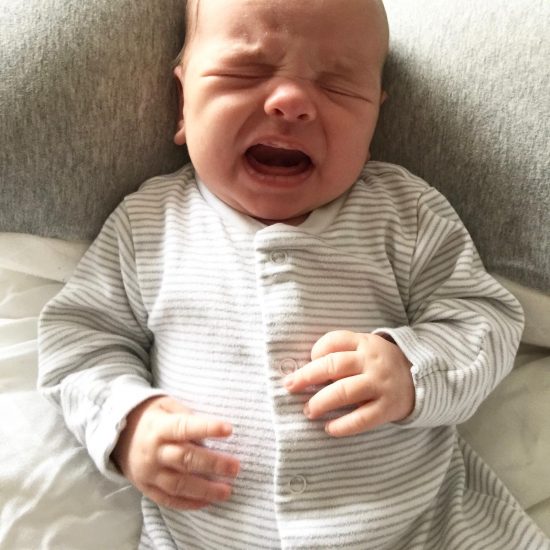 I’ll start by saying that this isn’t a post about potential causes of manic crying episodes in newborn babies – I honestly don’t have a clue what sets them off and, on a more serious note, if you think that there’s actually something wrong with them then always seek medical advice. Better to be safe than sorry, I say – I took Angelica to A&E when she was tiny because she cried for about eight hours, on and off; there was absolutely nothing wrong with her but I was glad I checked. And she slept for about six hours after the car journey, so…silver linings and all that. You get to know your baby’s usual cry, I think, and their little periods when they’re unsettled – anything out of the ordinary tends to be quite noticeable.

So anyway, yes, this post is more about things I do during those niggly hours when the baby cries for ages. Usually in between short periods of frenzied, spluttering feeding, so that you both start to lose your cool with one another. The “fussy” hours. Angelica had them every evening from around 5pm until 11pm when she was a newborn; Ted has actually been much better, and his crazy evening sessions only lasted for a few weeks. Whether that’s because I started following my little routines (see below) or just luck, I have no idea.

Here’s what I do (did) during crazy-frenzy crying sessions – once illness, trapped wind and hunger have been ruled out:

Sounds like a no-brainer, but you’d be surprised how many times this has worked for me, and also surprised at how many times it needed changing but I had totally forgotten to do it. I don’t know whether newborns are really old enough to know when their nappy needs changing, but they must know “discomfort” and so changing a wet nappy can’t ever be a bad thing. Maybe it’s the change in sensation and position, too, but Ted loves having his nappy changed and it usually seems to calm him right down if he’s in a tizz.

Take off a Layer, Skin to Skin

They bang on about this all the time when you’re pregnant, don’t they? “Don’t forget skin to skin in your birth plan!” Nothing complicated here, it’s just letting the baby feel your skin against theirs. Because it doesn’t really happen naturally, that often, during a usual day – normally one or both of you will be dressed, at least partially. So if they won’t stop ranting and raving then try holding them against you wearing just a nappy (them, not you, ha!) and see if they quieten down.

Pass the Baby to Someone Else

Ah, this is the best one in my opinion. When you’ve been shushing and rocking a baby for an hour and you’re ready to poke out your own eardrums with a hot, sharp kebab skewer, passing the baby to Someone Else (someone you know, obviously, not just a random person who’s passing the house) is possibly the definition of Absolute Bliss. And, as well as being sanity-saving, it is often quite effective, for some reason, at suddenly making the baby fall asleep. Maybe it’s because they sense how fraught we are with nerves and frustration, or maybe it’s the change of rhythm. Who knows. Who cares. Pass that baby over. And if you can’t pass the baby to someone else then..

Take a Few Minutes Out

Place the baby in the crib, safely, and then walk away. Shut the door, have a tea or a glass of water, or – as I have been known to do on occasion – a Magnum ice cream. Stretch your legs and arms. Remind yourself that the crying won’t last forever. I think that it is so important to step away from the baby when you’re starting to lose your cool. I think that a crying baby could make you lose your sanity if you sat there for too long, so if there’s nobody to help out then you have to help yourself and that means giving yourself a break. I felt so guilty with Angelica if I ever needed to just get away for a few minutes, but better to do that than sit there shaking with frustration and (can I say this?) anger. Just a brief period of near-silence is very rejuvenating and gives you the will to go on. I often find, too, that the baby is asleep on my return!

I made the mistake with Angelica of thinking that she was desperately hungry, during those long and irritable hours. I’d try and make her feed when she was red-faced and screaming, and she’d claw at my chest with her sharp nails and my nipples would get sore and we’d both just be ridiculously cross. What I didn’t realise was that she wouldn’t feed when she was crying like that, but also, she wasn’t actually that hungry. I’d be trying to get her to eat, but she was overtired and wanted to sleep – as soon as my husband rocked her then she’d be out like a light within minutes and wouldn’t wake for a feed for ages! So if feeding isn’t working, then forget it and switch to “helping them to sleep” mode. Rocking, bouncing and any of the below…

If you’re stuck in the dimly-lit bedroom like some sort of horror movie Grandma then get out of the bed, stand up and move to a different room. Hard when you’re knackered, but it’s actually quite re-invigorating! If you’ve been trying to watch Netflix on the sofa and the baby is getting crosser and crosser, then try climbing into bed. A new room, a new position, a new movement – all of these things seemed to work wonders on both Ted and Angelica. I can be trying for ages to calm Ted down, but as soon as he’s flat in the pram – hey presto. I think there’s only one rule here, and that’s to keep trying something new. It also stops you from dying of boredom. And if you’re pushing a pram about in the kitchen rather than stuck in the bedroom, you can make yourself a cup of tea, eat a slice of cake and chat to the dog/cat/fish/hamster.

OK, so lunges are the last thing you want to think about when you’re trying to comfort a shrill-screaming red-faced bundle of joy, but if you’ve got to shush and rock and bounce the baby anyway, why not fit in a bit of exercise? Tell me to fcuk off, but I did a few lunges last week whilst getting Ted to sleep (whilst also watching Broadchurch on the big telly) and they were quite satisfying. It gave me a focus to my baby-bouncing and the movement seemed to send him off. I only did twenty before my left knee gave out (have I ever told you about my crap joints? It’s like I’m held together with pipe-cleaners) but it was twenty more than I’ve done for about two years, and I did feel proud of myself for getting a bit of fitness in.. Take it or leave it, this one – I’ll forgive you for rolling your eyes!

I Drove All Night

I’ve written about the miracle of car journeys before (here), but if you can manage it and you’re not so tired that it’s dangerous then a quick trip in the motor can soothe the most fractious of babies. Obviously if someone else can do it then LET THEM DO IT! I tried to do so much myself with Angelica, I had it in my head that she would somehow self-combust if I wasn’t with her 24/7, but if they’re in the car seat then you can’t feed them anyway, so delegate, let them go off on a drive and get some sleep.

Right, I must be off – the baby is crying. Oh, the irony! At least I have a Dominos pizza en route… As always, please do add your own hints and tips in the comments section below.