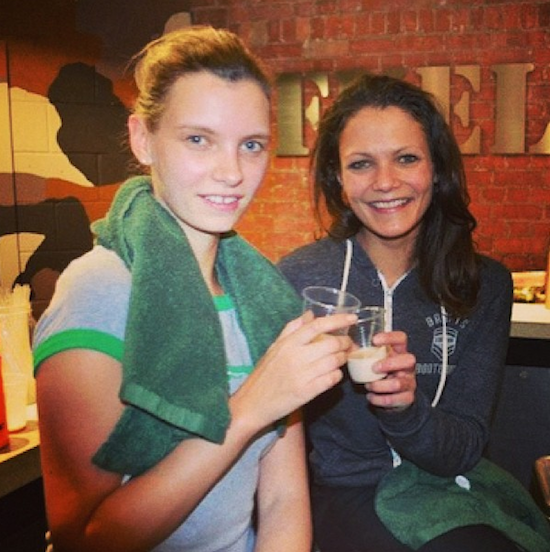 I write this with aching, heavy limbs but an amazing sense of satisfaction and achievement: I completed my first ever session at Barry’s Bootcamp. Those from the states might have heard of Barry’s before; it has something of a cult status in LA and New York and is loved by celebrities and supermodels who want to get amazingly toned bods. The Bootcamp itself is an hour-long training session in which your body is quite literally pushed to its limits (though you do take it at your own pace, so it’s not at all scary – it’s more about breaking out of your comfort zone).

Barry’s Bootcamp has now been brought to the UK – London, to be more specific, and on Saturday I went to see what all the fuss was about. I probably haven’t told you this, but I haven’t had a proper, dizzying, let’s-be-sick-on-our-trainers kind of workout in a very long time. When did I do that shred video and knacker my feet by not wearing shoes? Then. I haven’t worked out properly since then! So I was a little worried that I might die, or throw up, or faint, or all of the above. But I didn’t. I almost cried, I swore under my breath, I made incredibly undignified grunting sounds, but I didn’t totally embarrass myself – and for that I am proud. 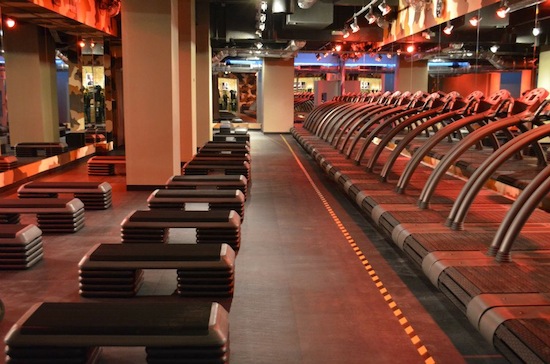 Just so that you can get an idea of what the session was like: take one very hot trainer from New York, add brilliant, high-energy music and place it all in a dimly lit room filled with state-of-the-art treadmills and racks of weights. You don’t really have time to worry about the weights, because it’s straight onto the treadmill for fifteen minutes of high-octane cardio. I’m a crap runner and I have a phobia of treadmills after an unfortunate “miscalculation” incident, but again, no time to dwell. I was running up a steep incline and trying to think about “the light at the end of the tunnel” before I could even faff around with my towel/waterbottle arrangement. I ran faster than I have ever run before because it was for quite short periods of time – say thirty seconds – followed by sections of jogging or fast walking to recover a little. 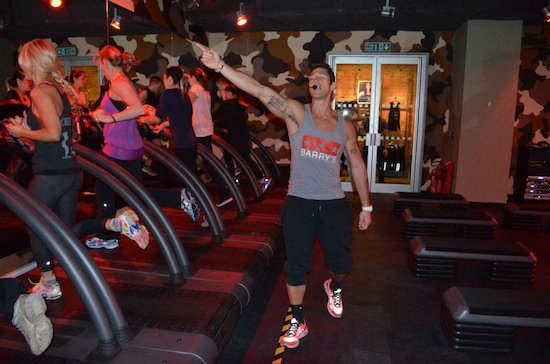 To cut a long (and sweaty) story short, the run was followed by a weights session (lunges and arm weights at the same time, anyone?) and then another running session and finally, abs and arms. By the time we finished my whole body was doing a weird buzzing thing – I felt quite high on adrenaline! I’d definitely recommend Barry’s for anyone who’s serious about getting fit and changing their body – rather than doing three or four mediocre, half-arsed sessions at the gym, just blast it with one of these! You could get by perfectly on two sessions a week, supplemented with regular walking and perhaps some yoga for soothing the mind and soul. 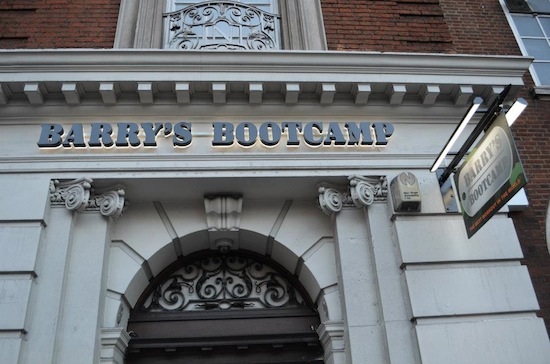 The Bootcamp itself takes place at 16 Upper Woburn Place – the entrance is actually on the Euston Road, directly across from the station. Handy for those commuters! The space is very New York Cool and the changing rooms are fully stocked with Malin & Goetz toiletries (of course this excited me!) including grapefruit cleanser and amazing shampoo, conditioner and body lotion. There were also Malin & Goetz candles burning away – a nice touch. Hairdryers and towels provided and some very slick lockers with electronic keypads – no need for padlocks or coins, just type in a code that you can remember and you’re done.

I’m going to try and video my next session (or at least my before and after state) and get some fitness tips from the trainers there. One of whom is going to be my gorgeous friend Anya who accompanied me through my first session – she was doing press ups like some kind of Navy Seal! (She’s pictured with me at the top of the page – we’re sampling some very tasty high-protein banana shakes!)  I can see how Barry’s could be very addictive – I imagine the results are fast and impressive and those who currently lack motivation at the gym would really benefit from the high-energy, “can-do” atmosphere. I’m not one for high-fives, but I did one to my treadmill neighbour at the end of the session – that’s how psyched-up I was. (If you know me at all, you know I don’t do high-fives.)

The Bootcamp only opened on Saturday and to celebrate this sexy new way to get fit there’s a special 20% discount on class prices. Quote MODELVIP if you fancy giving it a try – I’ll be updating again once I’ve done a few sessions and comparing it to other regimes I’ve done in the past. If you try it then let me know how you get on! You can follow Barry’s Bootcamp on Twitter and Facebook and you can book online and find class packages here: barrysbootcamp.com