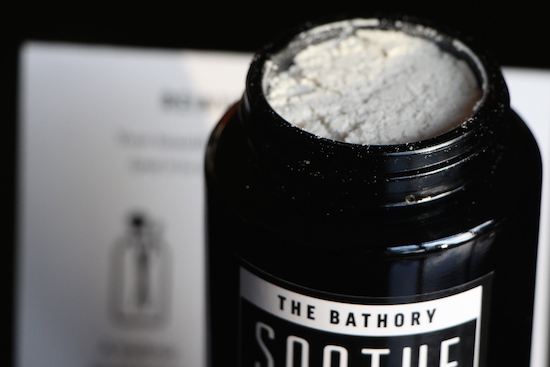 A new and exciting development in the world of bathing – a world in which I like to spend as much time wallowing and sploshing as is humanly possible: The Bathory opened their virtual doors last week, allowing anyone with access to the internet an opportunity to create their own customised bath soak. It’s a simple – yet genius – idea: you pick one of three bases and add your own blend of up to three essential oils, then The Bathory make up your personalised soak and deliver it to your door. It’s a quick yet satisfying process; there aren’t so many choices that it all becomes overwhelming, but there’s enough variety to keep you procrastinating for at least five minutes. 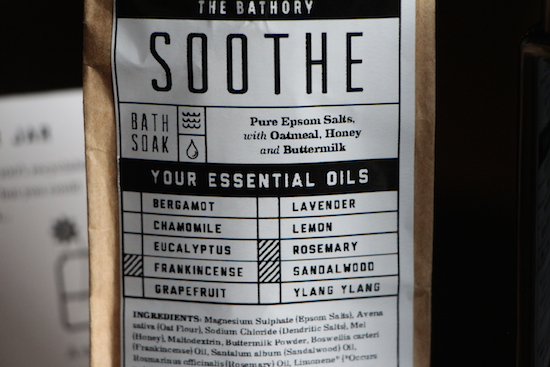 I chose the “Soothe” base which, as you can see from the photograph above, is made with Epsom salts, Oatmeal, Honey and Buttermilk. If that sounds as though it would be delicious on the skin, then it’s because it is; never have I felt so pampered by a bath soak! But never have I ever been so completely and utterly knocked out by one, either; I got into the bath and fell asleep for an hour and a half. I’ve only ever fallen asleep once before in the bath, and that had something to do with a day-long Rosé session on Brighton beach. Don’t ask – it was a decade ago and the memory is hazy. 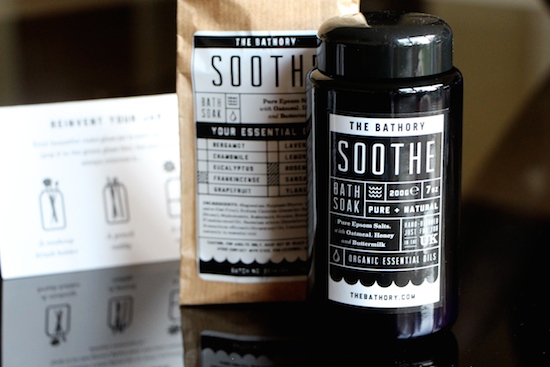 This stuff should come with some kind of safety warning; there’s no way you’d want to be operating heavy machinery for a few hours afterwards, let me tell you! And this isn’t even the most knock-you-out version, either – I get the feeling that the “Bask” one, with its three different types of mineral-rich salt, would send you into some kind of hundred-year slumber.

Oil-wise, I picked out Frankincense, Rosemary and Sandalwood. I suppose I was trying to create a musky, luxurious, mysterious kind of blend, but to be honest I didn’t have the foggiest what I was doing. At any rate, it wasn’t an overpowering scent when I opened up the salts – there are no added fragrances whatsoever with The Bathory soaks – so it wouldn’t have been a disaster even if the oils that I’d chosen had been a bit…clashy.

I’ve just ordered another pot, because I accidentally tipped the whole rest of my soak into the bath the other night! I have to say though, it’s pretty indulgent when you use a lot of soak at a time. The Bathory promise that it’ll be the best bath of your life, and I don’t think they’re actually far wrong. I’ll keep you updated on my second blend – I’ve gone for zingy, citrus essential oils this time, so maybe I’ll be able to stay awake!

The Bathory soaks are $30 for a jar (about £18) and it’s $5 for delivery. Delivery was very quick – I ordered at 1am on a Thursday morning and got my soak at 9.30am on the Friday. The jar isn’t huge – this isn’t budget bathing, by any means! – but if you’re an enthusiastic bath-taker and want something a bit different (that might just comatose you), The Bathory is the online place to be.