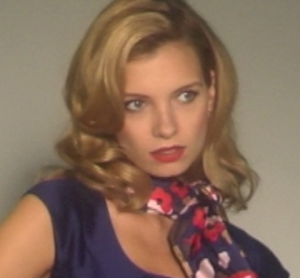 Have you ever wondered what goes on behind the scenes at a fashion shoot? Well I can tell you that there’s a lot of prodding and faffing that goes on, and obviously a lot of posing!

Just for you lovely lot, I have a behind the scenes video of my Pavilions Campaign Shoot. I would like to point out that most of the time, I had no idea I was being filmed – Ed the cameraman just kind of lurked about in the gloom! If you look very carefully, too, you can sometimes see a third photographer, popping his head out from behind the poly-boards! (Poly-boards are large upright sheets of polystyrene that make a godawful noise when you move them about. EEK!)

You get really used to being prodded and poked about when you’re a model; at any one time, there might be four or five people messing with your hair, makeup, accessories and clothes. It’s quite bizarre, because for most of the time you’re this solitary figure that everyone is standing far away from, just watching, and then the next moment, everybody swarms in around you!

It’s very interesting for me, watching this video back; although I see myself in the resulting pictures, I never really get to see how I look when I move from one ‘pose’ (I hate that word) into the next. It’s quite a fluid thing that I must just do automatically, because I don’t really think about it! Mind you, I have been doing this job for nine years, so you would hope that I had ‘got it’ by now!

Enjoy the video – some of the outfits are really lovely, I especially like the blue bow dress from Hobbs, the suit from Hobbs and the nude court shoes from LK Bennett!