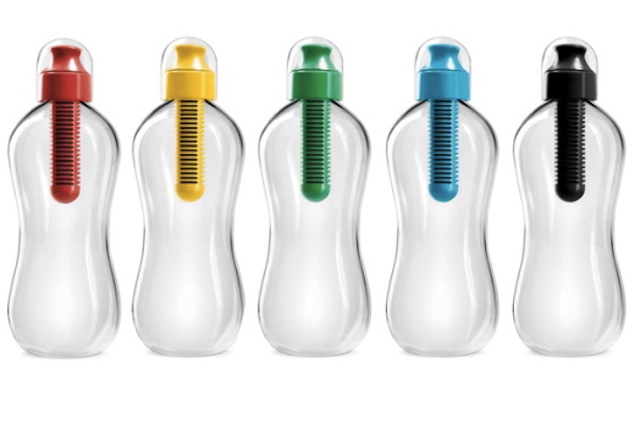 The Bobble Bottle. What a great idea and a brilliant design. A reusable water bottle with a built-in filter  so that you can fill it with plain old tap water, yet have filtered water with every swig. Marvellous. More eco-friendly than buying bottles of mineral water, and certainly more cost-effective. The Bobble Bottle comes in different sizes and has different coloured filter lids just in case you end up being a family of Bobble Bottlers and don’t want to get them all mixed up.

I love my Bobble Bottle: it’s brilliant for my new life, in which I seem to be constantly feeding a baby, because (unlike a glass) I can rest it beside me on the bed or sofa and just grab it when needed. It doesn’t require a steady bedside table, it doesn’t get flies/spiders/aphids in it and the cat/dog can’t saunter over and start drinking the contents. Yes, I love my Bobble Bottle but for two reasons:

1) the lid-lid. Or outer lid. The lid that fits on top of the spout, or sucking-thingy or whatever the part is called that you get the water from. The lid-lid is this clear, rounded piece of plastic, a bit like half of a Kinder Egg shell, and I am forever losing it. For such a convenient and easy-to-use bottle, it amazes me that it has a lid that needs to be pulled off, placed somewhere and then put back on again. It’s asking to be lost. Mine has rolled under the bed about forty times, so far, and now I can’t find it at all. It’s also something of a choking hazard if you have toddlers (I’ve started thinking about things like that already – everything is a potential disaster!) and if you have an enthusiastic dog, you’ll find it in his mouth on a daily basis. Not good. Why doesn’t it have a lid that’s attached to the neck of the bottle? That would be excellent. *HOLD ON A PRETTY SECOND! I’ve just seen that the new ones DO have a lid that attaches! Why the hell doesn’t mine? I only bought it two weeks ago! Ignore all of the above, then – there is only one problem with the Bobble Bottle and that is:

2) the weird, lengthy whistling sound that happens every time you have a drink: AKA the Death Wheeze of Doom. After you’ve taken a hearty glug, the air returning to the bottle (or is it coming from the bottle?) takes absolutely ages. It’s like an old man’s wheeze, apart from the fact that it never stops! After ten seconds, it’s like, “OKAY. I get it. You have a bad chest. Shut up already.” It’s a bit like having to suffer Darth Vader’s final breaths – not ideal when it’s the middle of the night and you’re trying to be really quiet so that you don’t wake the baby up. If it was Darth Vader and he was taking that long to die, I’d have to hit him with a spade and put him out of his misery.

Apart from those things, full marks! Bobble Bottle, £6.99 at Amazon