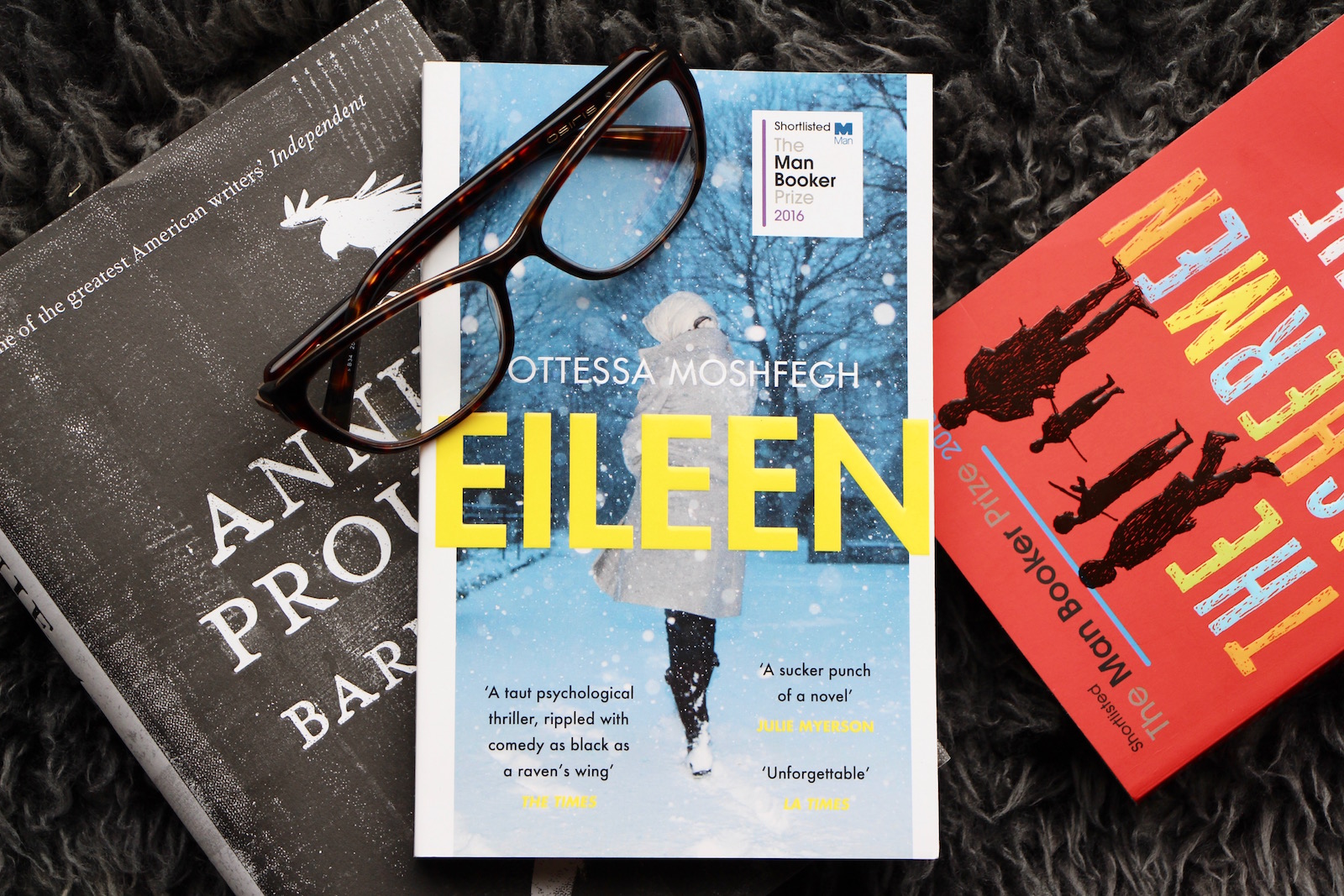 This is a difficult novel to write about, because I’m not sure whether I love it or absolutely detest it. Either way, it makes for interesting conversation – or would do, if anyone I knew had read it! Have you read Eileen? It grabbed my attention because it was on the shortlist for the Man Booker prize (I often work my way through the shortlist when I’m stuck for reading material) but I’m just not sure what to make of it at all.

Here’s what the blurb says (taken from Amazon):

“The Christmas season offers little cheer for Eileen Dunlop. Trapped between caring for her alcoholic father and her job as a secretary at the boys’ prison, she tempers her dreary days with dreams of escaping to the big city. In the meantime, her nights and weekends are filled with shoplifting and cleaning up her increasingly deranged father’s messes.

When the beautiful, charismatic Rebecca Saint John arrives on the scene as the new counsellor at the prison, Eileen is enchanted, unable to resist what appears to be a miraculously budding friendship. But soon, Eileen’s affection for Rebecca will pull her into a crime that far surpasses even her own wild imagination.”

It sounds thrilling and punchy, which is why I picked it out, but I just couldn’t get to grips with it at all – and, reading many online reviews, it seems I’m not alone. I think that the problem stems from the fact that the Eileen is totally unlikeable. Eileen is the sort of character for whom it’s difficult to dredge up any sympathy whatsoever – she seems to have drawn the short straw in life, stuck with a depressing, alcoholic father in a festering house filled with rotting food and decades of dirt, but still you can’t help blaming her for her hopeless situation. Because she’s crass – she’s so blunt that it makes you cringe. She overshares to the point that it’s almost physically uncomfortable, talking at length about her bowel movements and her hatred of her body and giving frank accounts of her drinking exploits, waking up with vomit frozen around her, the car crashed into a snowdrift.

All of this should be a little bit risqué, somewhat titillating – it should make for an interesting read, but the problem for me is that nothing dramatic really happens in terms of plot. You’re teased and teased from the start about a monumental occurrence, something drastic that’s going to happen that’ll be worth wading through Eileen’s faecal matter for, but then it never really presents itself. The foreshadowing of this event is constant – the reader is led from day to day through Eileen’s dirty, self-obsessed life, and the carrot of this exciting event is dangled at every turn, making you believe that it’s going to be something so outrageous, so toe-curlingly horrible that you mustn’t possibly miss it.

And then you almost do, because it’s not that toe-curlingly horrible anyway. It happens about ten pages from the end, and you read through it thinking seriously, is this really it? I felt so cross that I’d put up with bloody Eileen for a whole novel and that the climax was such…an anti-climax. It seemed seriously arrogant of Eileen to assume that anyone would be interested enough in her sordid life to want to stick around until the end – the lack of punchline was just the sort of sick joke I can imagine she’d want to inflict on someone.

But perhaps – because I’m keeping an open mind here – that’s the genius of this book. I’d like to think that the whole thing is an experiment in just how far the traditional rules of fiction can be subverted. Because usually you have to have some sort of empathy for the main character, you have to like at least something about them, whether it be their wit or their cunning or their naivety or just that their voice is so distinctive and strong. (Take Humbert Humbert in Lolita, for example, or Hannibal Lecter – neither have any redeeming features on paper, but both make for an engaging narrative!) There is nothing – and I mean nothing – to like about Eileen. It’s a feat of literary prowess that I was kept dangling along until the end of the novel and that’s why I’m finding it so difficult to know how to rate it – I can’t deny that the novel has made a big impression.

Eileen has no filter – she tells it exactly as it is, whether it’s the fact that she stalks a man she works with, or she dresses in her dead mother’s clothes – and for this reason you’ll find few novels that have such an uncomfortable, unsettling tone to them. If you’re interested in literature that’s far from the norm, that pushes boundaries, then you’ll want to at least dip your toe into this. I threw the book at the wall after I’d finished the last page and declared (to nobody in particular) that I hated it, but the fact that I’m writing about it now means that it’s been playing on my mind.

I’m hesitant to recommend it, because you might all want to kill me by the time you’ve finished it, but if you have read Eileen then please do let me know your thoughts in the comments below. A work of art? A boundary-pushing masterpiece? Or a day’s reading time that you’ll never get back?