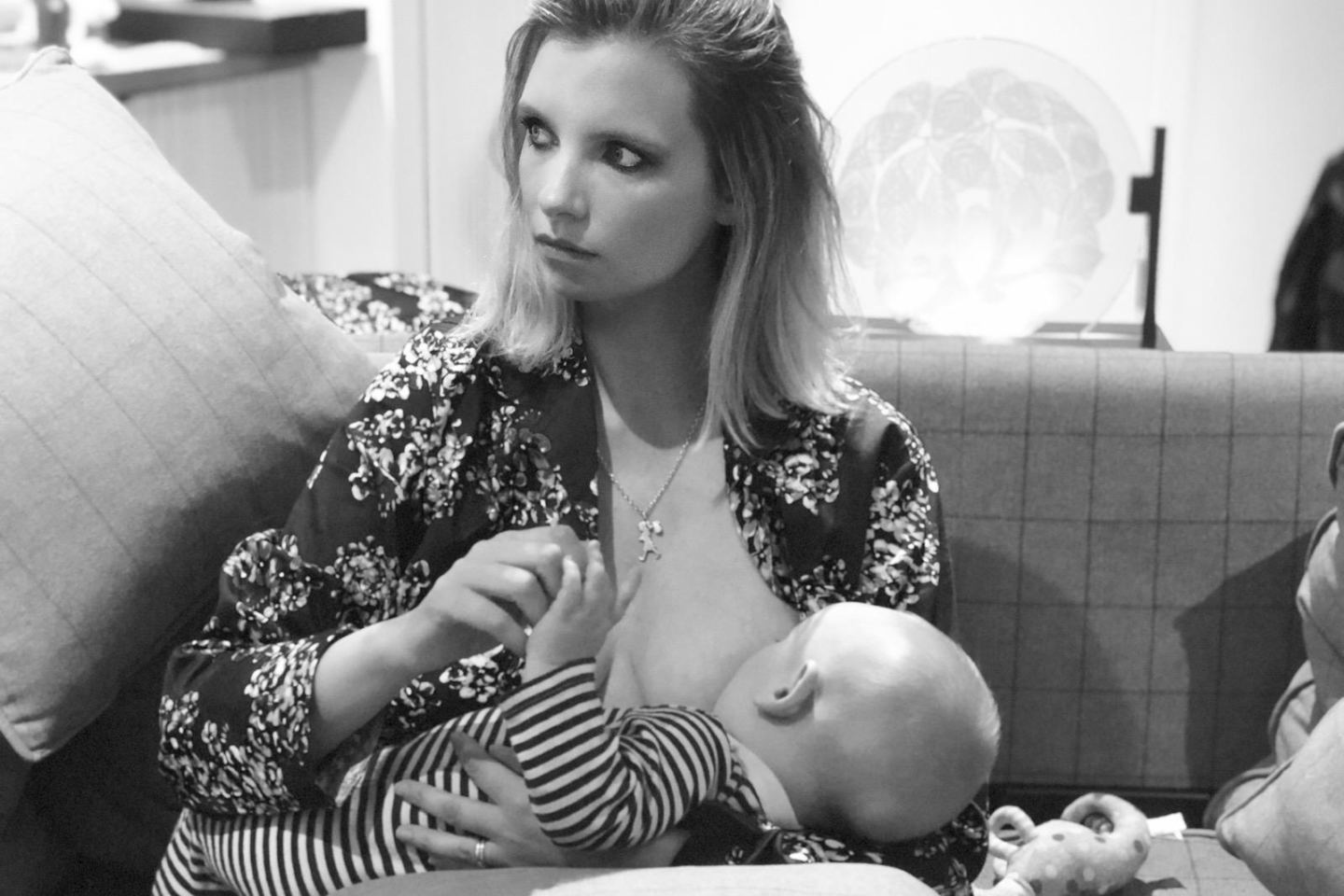 Status update on the night-feeding/breastfeeding saga: Ted is now taking bottles. Of formula. Guzzles them right down, has a burp, looks very pleased with himself. In the end, it was simple necessity that did the job – I had to go away for work, and although I wasn’t staying away overnight, I was gone from 6am until 11pm on one day and the majority of the waking hours on two more. In a way, I was quite offended that it all went so smoothly – why wasn’t Ted pining for my big, cushiony bosoms?! – but relieved that we had finally conquered the bottle-feeding situation.

It would have been a great time, you’d have thought, to completely knock breastfeeding on the head, get some bloody sleep and repair my battle-worn, baby-bashed body. But no. Though we are doing (random) bottles of formula throughout the day, I seem to still be acting like a human milking parlour at night, with Ted latching on at any time he deems fit to grapple at my chest and noisily demand his satisfaction.

And do you know what? I’m so torn! Because I could just play hardball and stay away from him at feeding times for a few days – hide in my office with some wine, or sit in the garden shed drinking gin, or pop to the pub (ooh, theme developing here) – but I still appear to have a major emotional attachment to either the idea of breastfeeding, or the physical thing of breastfeeding, or something else. Or both. (Crikey – that was concise and non-confusing, wasn’t it?) And is that so wrong? Why is it that I feel an outside pressure to stop breastfeeding, even aside from my own reasons (sanity, physical health, the wellbeing of my bitten nipples, work)? The number of people who have said to me,

“You’re still breastfeeding? Why on earth?”

“You want to get him on that bottle pronto, fill him up with something proper!” (Words to that effect.)

I can hand on heart say that I’ve had more commentary – with both babies – about how I should be stopping breastfeeding than I ever had when I smoked (quite heavily!) and people helpfully told me how bad it was for my health. I find that so odd. And (please don’t think this is a “them and us” breastfeeding wars invite!) it makes me feel as though we still don’t have a great culture for supporting and encouraging breastfeeding. Maybe it’s because people do moan a lot about breastfeeding when they’re breastfeeding (guilty of that) or at least feel the need to discuss it quite frequently, but that’s a whole other post perhaps! I’m sure that most of the comments I’ve had from friends and family have been simply because they are worried about my tiredness, but sometimes when you’re moaning you don’t want a solution, you want someone to say

“Do you know, you’re doing a really good job there. You must be bloody knackered, poor you. Oh dear. God, yes, it must be so tiring. Poor you. Well done though, well done for doing that.”

(Haha! This reminds me of a comment on one of my recent posts where a reader called me a “breastfeeding martyr”. It really struck a chord and gave me loads of material for a lengthy post about how you feel when you’re breastfeeding, so I must remember to edit that and polish it up and hit “publish”.) 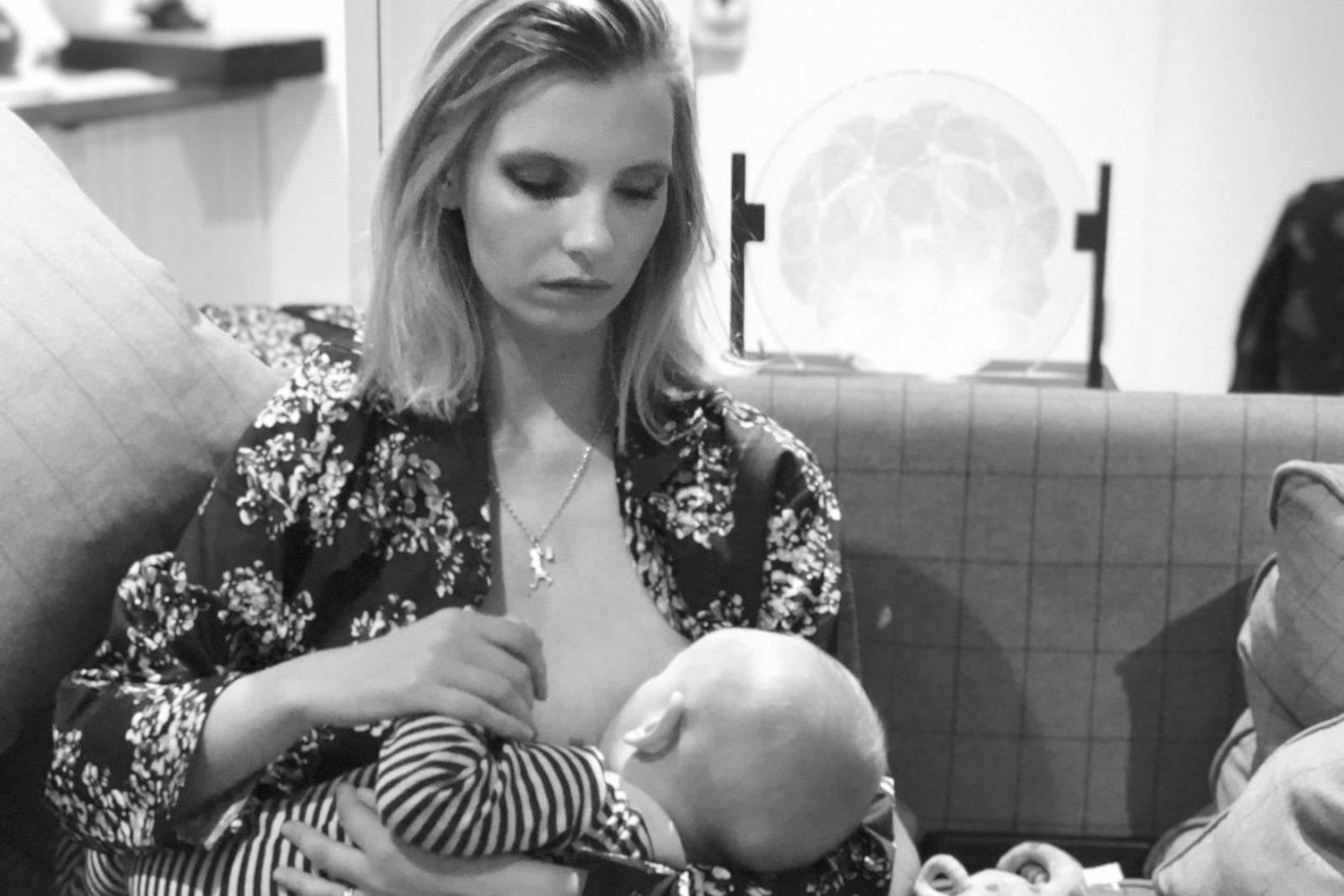 So anyway, I can’t seem to quit breastfeeding, not just yet. Here’s why:

1 It’s easier to latch a baby on in the middle of the night than it is to go and get a bottle. Yes, even if it’s a ready-made bottle beside the bed. Because – marvellously – you can lie down and doze whilst you breastfeed a baby, but you’d be in all sorts of wet-patch trouble if you attempted that with a bottle. The downside of this is that you’re on your own – the night feed problem is all yours. But I can’t sleep through a baby crying anyway, and lie there semi-awake hearing little moans as the bottle is rejected/played with, so it’s swings and roundabouts with the night feed situation.

2 I still enjoy it. Mostly. See below for some current “cons” with the whole breast situation. But I love the closeness and the cuddles and the feeling that you’re doing something quite unique, quite special for your baby. In my mind, I’m giving a little health boost each time I do it, although I have no idea whether this is true – especially if I’m also feeding formula. I read some stuff about breastmilk being pointless once they’re weaned, but I need to do more research on that. The World Health Organisation seem to think differently – oh, the wonderful and confusing world of Google!

3 I can’t give up my Magnums. Regular readers and followers of my social media platforms (@modelrecommends and @uphillbaby on Instagram and @modelrecommends on Twitter) will know that I have a huge thing for Magnums. The chocolate-covered ice creams. Oh man, they are just sublime. My favourite? Mint choc! Anyway, I allow myself one a day as a treat for breastfeeding (I need all of those extra calories!) and I’m just not sure I’m ready to knock them on the head. World’s lamest excuse for carrying on with breastfeeding, but hey.

5 I can’t stop until I’ve somehow evened out my breast sizes. I don’t know whether anyone else has had this, but one of my boobs is like the breast of a perky Californian cheerleader, the other is…sad sack. I’m addressing this issue and working out just how I might reset the balance. I don’t want to be flinging one tit over my shoulder for the rest of my life whilst the other sits nicely in an Agent Provocateur bra cup. (It’s not that drastic – I do like to exaggerate for effect, you may have realised that by now.)

Some reasons for completely stopping breastfeeding, now, just to represent the flip side:

1 Ted loves a little nibble on the old teat. I never know when he might go for a chomp, so I can spend quite a lot of the feed on tenterhooks, waiting for the little jab from his teeth. I feel as though I’m dating Edward Cullen – always waiting for that bite.

2 Mixing breastfeeding and formula has resulted in quite a bizarre, chaotic routine of never knowing when Ted’s due a feed or which type of feed he needs or what he had last. Sometimes I latch him on and realise he’s just had a full bottle, but he has a mini feed anyway which is a pointless waste of time, unless it’s somehow comforting him. In the evening, he has a full bottle but then wants to feed to sleep, so I end up doing both. In the morning I breastfeed him because I have lots of milk, but actually it would be better for him to have a bottle so that I can get up and about and do stuff… I need to devise a routine, but I can’t quite work out which feed of the day I want to keep to the boobs. If any. I’m sure that with Angelica I just kept the morning feed? Or was it the evening one? Time to re-read my own blog archives…

Goodness, that was a lengthy pouring-out of the contents of my mind, wasn’t it? Thoughts in the comments below. As always, this is not a post about breastfeeding vs bottle feeding and which is better for the baby – fed is best and (obviously, because I’m mixing formula and breastfeeding) I don’t judge anyone for feeding either way. We’re all just muddling through, aren’t we?