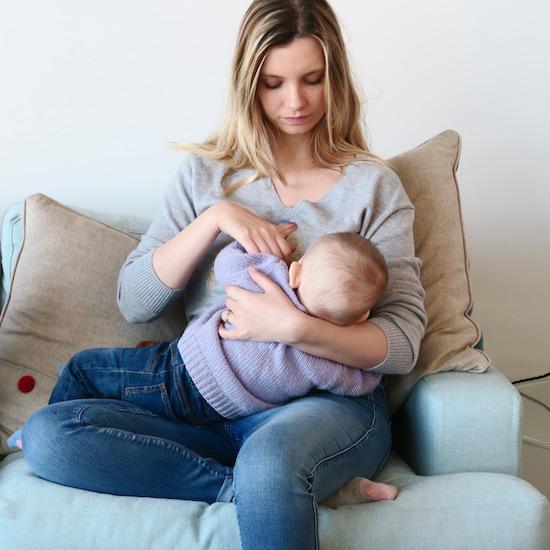 Today is the first day that I will be with the baby but do absolutely no breastfeeds. Tomorrow she is one and our little breastfeeding journey seems to have come to a natural, contented end. I have to say that I would be more than happy to carry on with feeding her – I’ve really loved it, even though I didn’t ever intend to do it for so long – but my work trips are becoming more and more frequent, and though they are usually only for one or two nights, it’s simply too disruptive to a good breastfeeding routine.

Before I bang on about how much I love breastfeeding and annoy the hell out of people who don’t – or can’t – breastfeed, I should say that my relationship with it hasn’t always been plain sailing. (You can read all breastfeeding posts here and there’s usually a little update in each of the monthly diary posts.) The first few weeks were filled with setbacks as the baby had tongue-tie, I had severely cracked nipples that bled and wept and we were living in a tiny holiday cottage which was, in itself, stressful and not conducive to a relaxing breastfeeding experience. The week or so after the baby was born saw an immense heatwave in the UK, with temperatures reaching 37 degrees for almost five days – the baby wanted to feed almost constantly and things were pretty grim.

Then there was a mastitis episode which was even grimmer – and that happened when I thought that I had breastfeeding well and truly down to pat. It was quite the surprise to suddenly find bright red streaks across my breast and then develop a fever to end all fevers.

So it hasn’t always been easy, and I do feel extremely lucky to have been able to overcome these blips and have a good, lengthy breastfeeding relationship, but I realise that for many people it’s just not possible and I absolutely recognise that the pressure to breastfeed is immense. I mean, it’s everywhere. Posters on noticeboards, talks from midwives, even disclaimers on the websites of formula manufacturers, so that as you’re trying to look up how to prepare a bottle they’re telling you YOU DO KNOW THAT BREAST IS BEST, DON’T YOU? Give it a rest. It is not helpful, when you’re struggling with a swollen nipple and a crying baby and infected stitches, to also have some voice of doom in your head telling you that you’re a failed human if you can’t manage to feed your baby from the breast. Yes, it’s great to educate, but people also need a bit of tea and sympathy and – ultimately – to be told that it’s not the end of the world if they can’t manage it.

And so here I am, one day shy of a year, later, sitting in bed feeling quite emotional as the baby has her morning milk downstairs. Not on my boobs. My boobs, as it happens, feel a bit sad and empty. Not the foxes’ noses that I had feared (or “marbles in socks” as one friend described her breasts post-feeding), but definitely not the proud, full, massive boobs of yore. They are decidedly soft and – would the word quiet be a strange word to use? Quiet.

Now the whole point of this post, before it became a ramble, was that I would like to do longer with the breastfeeding, I see no real reason to stop yet, but my work trips are – as I mentioned – becoming more frequent and it just doesn’t seem right to keep interrupting things. Not for the baby and not right for the old bangers. Things have already tapered off into a natural end, because various jaunts away have gradually chipped at our routine, and it seems crazy to jump-start my supply for it to be repeatedly messed about with. Had I not been on so many work trips then I think I’d still be feeding twice a day – I enjoyed it a lot and so did the baby. I assume. From the way she would enthusiastically launch herself at my chest. But a three day absence back in May, followed by another two days shortly afterwards and a spattering of one night trips away really messed with my milk supply. And though the baby seemed happy enough latching back on as though nothing had changed, she started to come back off very quickly and it became apparent that – certainly in the evenings – there wasn’t much there. So evening feeds (the soothing ones) stopped in the second week of May and since then it has just been the morning one. Today (I’m writing this at 8am) will be the first day that I’ve been home and not done a morning feed – not a single feed. I’ve been away for two days and missed two feeds and I just think that it’s time. Though the temptation to just check is overwhelming – maybe I should have a little try, bung her on, just to make sure? Ha!

So that’s that, then. My boobs are, once again, my own. I might go and get measured for some crazy uplift bra with padding and inappropriate nipple-skimming shape. I might go and get my ears re-pierced! Perhaps I’ll spend the morning packing up my various nursing bras and tops and putting them on the loft… Or perhaps, by the time you read tomorrow’s One Year Baby and Body Update, I’ll have caved in – just to see whether there’s any milk still in my boobs – and I’ll be back on the morning feed. Who knows?