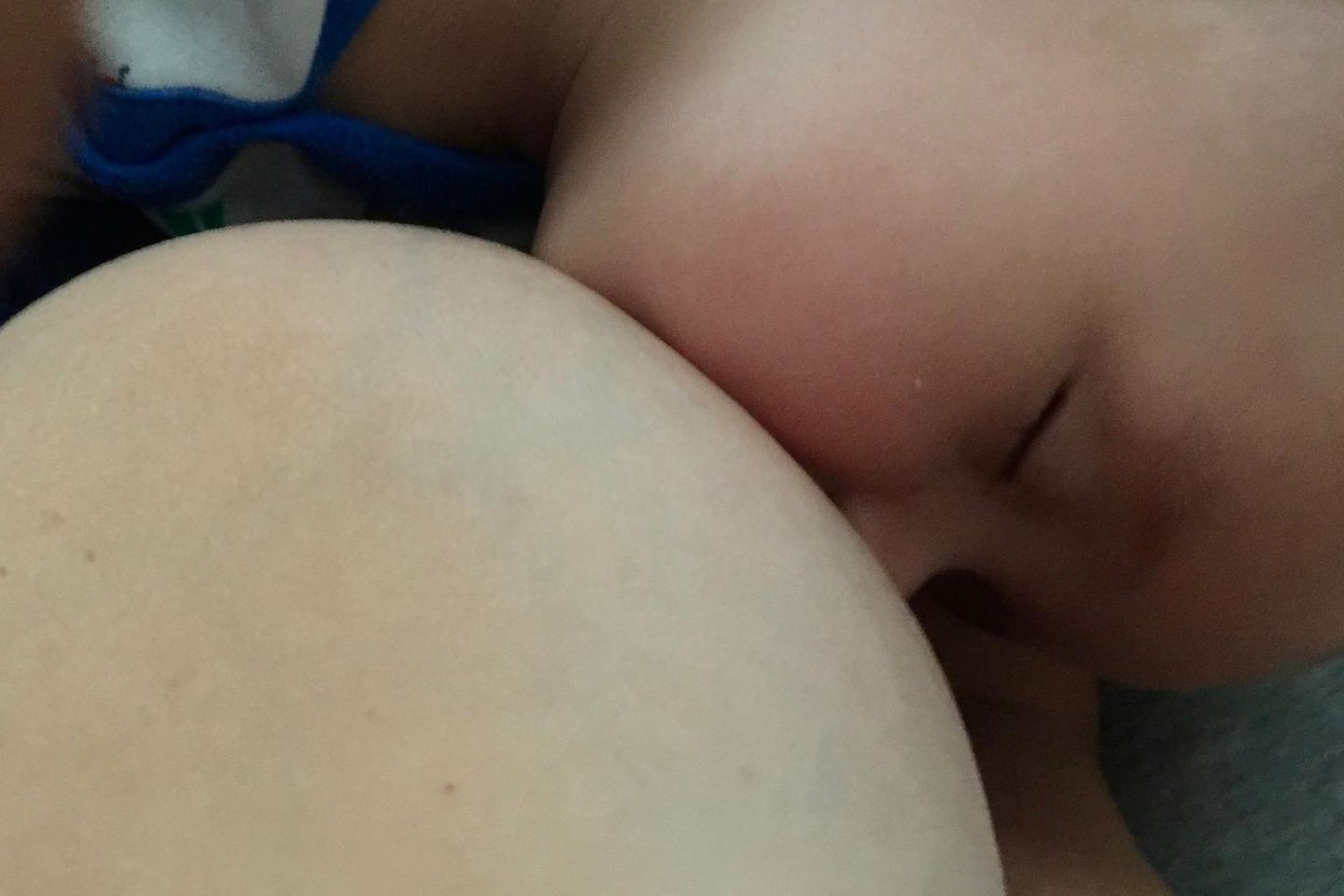 I’m thinking of giving up breastfeeding. And I know that the phrase “giving up” sounds both defeatist and perhaps a little overly-dramatic, but I do feel defeated and it does feel quite dramatic. The truth is, I’m rather at the end of my tether with everything at the moment (hence my – hopefully notable! – absence here on The Uphill) and the issues I’m having with breastfeeding are simply the last straw.

Let me lay out for you the extent of the problem. Because – as you’ll see – it’s not really a physical problem, it’s more an emotional/mental/utter exhaustion. Which is physical, I suppose, isn’t it? So yes, it’s an all-round problem. Start that again, shall we?

Let me lay out for you the extent of the problem. Because – as you’ll see – it’s very much an all-round, hit-me-from-every-angle sort of problem. And I know that so many people will read this and roll their eyes and say giving up?Well THAT’s a no-brainer! but when you’ve been breastfeeding every few hours for the past seven-odd months, it does become a big part of your life. Stopping seems like such an abstract idea. (“But what would I do with my arms? What would I do with my sort-of-spare time?!”)

My major issue is tiredness. I’m absolutely exhausted. Breaking point. Ted wakes up every two hours through the night and screeches like a baby dinosaur and because I don’t want him to wake Angelica up, I just feed him to soothe him. I know, I know – rod for my own back, etc, but I just can’t deal with having everyone awake and crying in the middle of the night. My husband has been trying to get Ted back to sleep without a feed, but it doesn’t buy much time and I don’t know how much longer I can carry on with broken sleep, night after night. I don’t have the energy to even read up about solutions anymore! But equally, I don’t have the energy to prepare a bottle in the middle of the night either – obviously the tiredness problem would then be shared, because it wouldn’t be just me feeding him, but what a faff! It’s the one thing that puts me off – sticking a baby on your boob and lying down, half asleep, still seems like the easier option.

Then there’s the work thing. So far I’ve been taking Ted with me absolutely everywhere – he’s been on more photoshoots than I can count, now, but it hasn’t been ideal. I did a radio job a few weeks ago, before we moved to Bath, and I left him at home because it was only a few hours and we were trying to get him to take a bottle of expressed milk, but he didn’t really have it, just waited on a sort of starvation protest for me to get home. I don’t mind Ted coming along with me wherever I go – I actually treasure the little moments of time we have together – but it’s hard work. Train journeys, hefting the pram into the back of black cabs, breaking up long car journeys with leg-stretching sessions and breastfeeding with my knees jammed up against the steering wheel, breastfeeding during meetings, changing poo explosions in public toilets. None of it is ideal. None of it really allows me to concentrate properly. I don’t work away often, I’d say that 80% of my work can be done from home, but it would be good to be able to get out and about without poor Ted being parcelled about like a little awkward suitcase. It’s not particularly enjoyable for him, I’m sure. And I know that some people might be horrified that I take him everywhere, on the tube, on the train (GERMS GERMS GERMS! POLLUTION!) whereas others might think that’s brilliant – I’ve never really thought about it in too much detail, I’ve just always done what I needed to do at the time.

My next issue is biting. As in, “biting of the nipples”. Ted, we’re talking about here, not anyone else… He started doing it when his teeth came through a couple of months ago (he got them early) and then stopped for a while, but now he’s back like a mini vampire. nipping away and laughing when I cry out. Angelica did it a few times when she was a baby, but stopped pretty sharpish when I screamed loudly on one particularly clampy, painful bite. Ted seems to find it hilarious when I scream or make any sort of distraction noise, and he doesn’t really appear bothered if I completely take him off. It’s at the point where I’m often a bit scared to latch him on! #hannibal

I’ve actually found breastfeeding Ted a very different experience to the time I had with Angelica. In terms of latch and positioning, we’ve had a wonderful, pain-free time. But whereas Angelica would feed for ages and ages, sometimes an hour or more if she nodded off during a feed, Ted does tiny snatches of time, perhaps one or two minutes, and a stretch of ten minutes feels like a long time. I don’t think that this has ever been a problem because he has grown fine, plenty of wet and dirty nappies, but it hasn’t felt as though he’s been as satisfied as Angelica was.

I’ve definitely felt as though things have been harder, this time around, despite the lack of specific “nursing” problems – having a toddler to look after as well as a baby does not make for a relaxing breastfeeding experience! I don’t think that you can luxuriate so much, when it’s not the first baby – there’s always something to be done and never enough time. Perhaps that’s why Ted seems so distracted when he’s feeding – he probably is distracted! But then I do love the opportunity for long cuddles and that close time that you get with breastfeeding. Which I know you can also get when a baby is bottle-fed, obviously, but I can imagine that once a baby gets to the age when they can hold their own bottle, which Ted can now (I’ve been trying to get him to take expressed milk), it’s not likely that you’re going to sit there cuddling them each time they have a feed! Surely, the time when they take a bottle is like some gift from above – good God, you could have a cup of tea that was actually HOT if they were holding their own bottle!

Anyway, I’ve always been a believer that it doesn’t matter which way you feed your baby, so long as they are fed – my reluctance to stop breastfeeding is actually more of a silly personality flaw than anything else. Because I’m a bit of a perfectionist, and (I’ll admit it, I’ve only just come to terms with this fact) a bit of a control freak, and once I set myself a task I get very upset if I can’t finish it. Whether it’s writing a chapter of a novel, or learning a new skill, or persevering with something that I find hard to do, or sticking to a deadline. Silly, really, because I’d probably drive myself into the ground before giving up on a challenge I’ve set myself, but recently I’ve decided that being mentally and physically healthy for your family is far more important than meeting all of your goals. I think I’ll always have too much on my plate, but for the moment I need to try and manage my various commitments, and if stopping breastfeeding means that I can get some sleep and function like a normal human being, then perhaps that’s the decision I’ll have to make.

But I feel sad. Really sad about it. Maybe I won’t stop just yet – keep on with the morning and evening feeds and then do a bottle for all of the five thousand other feeds that happen in a twenty-four hours period. I’ll let you know what I decide. I’ve stocked up on a few expressed bottles and tonight I will re-start my Mini Magnum habit in earnest (I’ve been trying not to eat them, since we moved to Bath!) just to get in those extra calories. Good quality milk, you know, if you eat Magnums. Scientifically proven.

My hormones are absolutely all over the place, for some reason, so I’ll leave it there before I burst into stupid, pointless tears! Just as a by-the-by: I didn’t unpack my breast pump until the other day, and so we’ve had a couple of attempts with formula. Ted wouldn’t take it – Aptimil or Cow & Gate. But then he won’t really take expressed milk either, so… To be quite honest, stopping breastfeeding but then filling my time expressing, stuck to a pump, is sort of pointless, but we shall see. At least it gives me an excuse to sit and watch telly for a bit. If I only end up dropping a couple of feeds then maybe I’ll express for a while, if I can stay awake long enough…

Thoughts in the comments please: did you feel sad when you stopped breastfeeding, if you breastfed? What made you stop, or did you just feel that it was the right time? And bottle-feeding experts: quickest way to prepare a bottle of formula? Any tips and tricks? How do you sterilise if you don’t have a microwave? Do you sterilise? Questions, questions!

I’ve just re-read my post about when I stopped breastfeeding Angelica – the actual reason I stopped was that I had found out I was pregnant with Ted and felt so, so tired and sick, I couldn’t handle feeding as well. But obviously I couldn’t write that, because the pregnancy was so new. So I sort of skirted about the issue. If you fancy reading that post, then it’s here: As Breastfeeding Comes To An End.