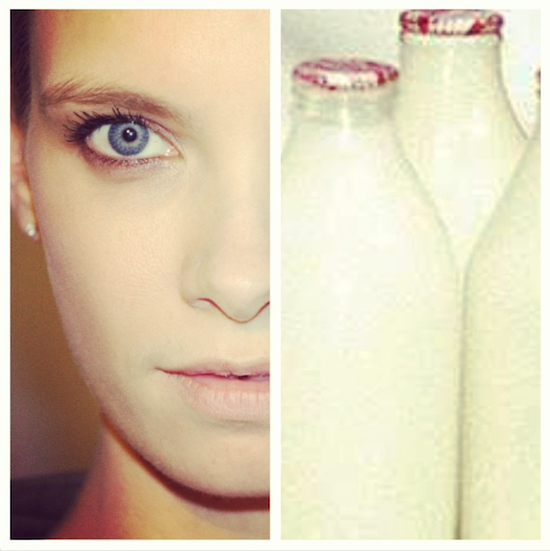 Look, I just want to put this out there. There’s no risk-free way, at present, of me proving or disproving this little theory I’ve come up with, but I have convinced myself that it’s true and so I want to share. This isn’t intended to be a scaremongering session by any means, I’m just interested to hear your thoughts and own experiences.

You’ll know, if you’re a regular reader, that I suffered quite badly with breakouts on my jawline and then cheeks from about mid-August until mid-December last year. Various skin treatments did help to keep my skin clear at various points, and I will hold up La Roche Posay’s Effaclar Duo as one of my heros, but it was quite a dire situation. Model + Temperamental Skin = Disaster. Now, here’s where things get interesting. On the 22nd December, I had my last drink of milk. I think it may have been a hot chocolate (naughty!) but whatever it was, that was the last time that cow’s milk, in its milky, liquid form (ie not cheese or yoghurt) passed my lips. Do you know when I last had a spot? Can you guess?

Ten thousand points to all of those who guessed “22nd December” – you guessed correctly! The thing is, I’m not saying that my skin cleared up tremendously since then, I’m actually saying that IT IS PERFECTLY CLEAR. Better, I think, than it has ever been. I had some quite deep marking on my face, and have been working on that (post upcoming), but in terms of breakouts, spots, even tiny pimples: nothing. It’s nothing short of miraculous, is what it is, and the only thing I can think of that has changed is that I’m not drinking milk.

I worked it out when I was in America; I was looking at a menu in a diner and thinking about the breakfast video that I did (see here) and lamenting the absence of porridge. (I know it’s a weird thing to miss, but when you’ve done pancakes and eggs and all that kind of thing for over ten days you become a little homesick.) I realised that I hadn’t eaten porridge since before the 22nd – and that’s a whole half pint of milk a day that I hadn’t consumed. Add to that the fact that I hadn’t had any hot chocolate (my winter vice; I make it at home with Green & Blacks as a treat) and that my yoghurt consumption had probably more than halved, and you have something of a situation. (Read the next bit as though Carrie Bradshaw from SATC is saying it): Was Milk Breaking Me Out? Had my relationship with Milk come to an end?

It could, of course, all be psychosomatic. Perhaps I had looked so hard for a cause of my breakouts that I had invented one and the subsequent relief had made my skin clear up. Perhaps it was the sun (but skin is still clear), perhaps it was lack of stress (almost certain this is also a factor) or perhaps it was the daily dose of topical vitamin C that I’ve been applying (Skinceuticals Phloretin Gel). But I don’t think so – surely it’s too much of a coincidence to ignore? No milk, no spots.

The only way to really find out for sure is to start on the cow’s milk again. I’ll admit that I’m tempted – the sceptical part of my mind is asking me why I would all of a sudden be sensitive to milk, and I also miss my porridge – but I’m enjoying my clear, glowing skin far too much. I hope to high heaven that this post doesn’t tempt that evil sod, Fate. That would make me look incredibly silly, wouldn’t it?

Comments below, please: has anyone else noticed a link between a food allergy and breakouts? Anyone suddenly went all lactose-intolerant on themselves? Let me know!

You can find all of my acne-related posts here if you want to “follow my breakout journey”. (Ugh.)