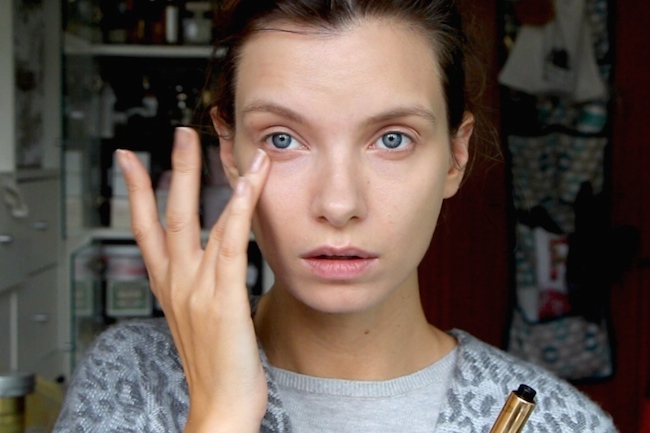 As promised, a video dedicated to undereye circles and ways of disguising them. My dark circles are ridiculous today – so much so that I’m almost regretting filming the makeup video when I did, at the end of last week. It would have all looked so much more dramatic if I had waited and filmed it now; I’ve been laid up with some kind of bug, and a cold on top of that, so my face looks quite shocking. Dark circles that look as though I’ve shaded them in with eyeshadow, red flaky patches around my nose, chapped lips…

Anyway, enough about my sickbed face, let’s take a quick look at the couple of undereye-circle-concealing methods that I show in the video. The first works by correcting the bruised colour beneath the eye before using a light concealer over the top; the second simply uses one of those super-strength concealers that I mentioned a few weeks ago in my Top Undereye Concealers video. Both are followed with an ultra-fine setting powder (optional) and I then use YSL’s Touche Eclat and Charlotte Tilbury’s Retoucher just to show the different effects. It’s just a short and to-the-point demo, really, but I hope that at least some of you find it helpful. You can read more about the products I’ve used by scrolling down the page – to watch the video simply press play.

(Apologies in advance: Benefit’s Erase Paste does come in more than one shade. I have no idea why I thought otherwise, unless it originally just came in one shade?)

If you can’t see the video pane then you can find it on Youtube here.