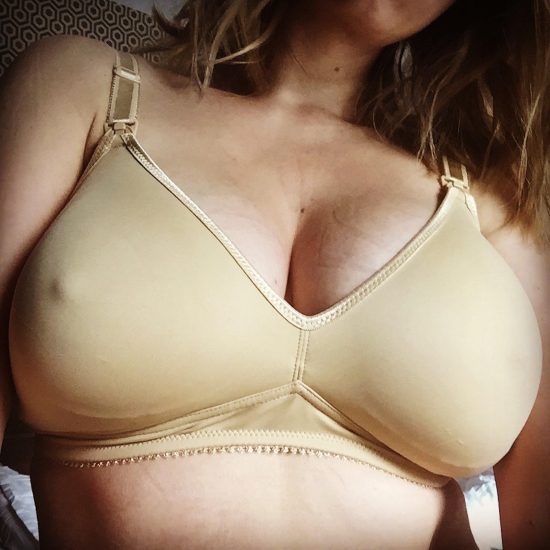 I do remember the heady, newborn days with Angelica when my breasts hadn’t quite worked out what they were doing yet – I’d wake up to soaked sheets, the pads in my bra having failed to absorb the river of milk that had streamed out whilst I was sleeping. But I’m sure that this didn’t last long. There were a few times when she pulled away from the breast and cried because (I assume) she couldn’t handle the jet-streams of milk that were firing out at her at (approximately) seventy-eight miles per hour. When you think about it, it can’t be that nice to be a tiny baby, with a tiny soft mouth, latching on to a lovely soft nipple to find that it suddenly spurts liquid at the back of your throat so fast you feel as though you’re drowning.

So, I can sort of see why New Baby Ted is getting a bit cross with my over-enthusiastic milk production or, to give it it’s official name, forceful letdown. We’re almost at four months, and my knockers are still at “power shower” level. You know when you get into a shower and you have to sort of dance in and out of the water stream, because other wise it’s like someone’s nailing long, glass shards through the tops of your feet? Well that’s what my milk flow is like. Nearly every time.

I’m not complaining, because I’d much rather deal with too much milk than worry about not having enough (I did have a lull with Angelica at one point, and had to work quite hard to build up supply again), but it can get a bit frustrating when your baby gags and splutters at the start of every feed. I want to say “dear tits, please calm the f*ck down!” I don’t know what sort of world disaster they think they’re preparing for; it’s like they think I’m going to have to feed the five thousand or something. And they are always – always – on red alert; I only need to look at New Baby Ted and I get that familiar tingling in my shoulder blades that starts it all off…

With the gagging, spluttering thing, it has got better over time – to be honest, I started writing this post months ago when the over-active tits problem was at its peak – but I can still write my name in milk on the shower door when I have a wash in the morning. Really, it would probably be a good time to start expressing, but I simply can’t be arsed to spend my small amount of free time plugged in to an electric milking machine. It’s going to have to happen at some point, though I must say that if I haven’t started expressing by the time weaning begins (in about two months’ time) then I won’t bother at all. If there’s ever the odd feed I’m not there for then I think I’ll do formula instead – I don’t know whether I have the energy or patience to sit there extracting breast milk for the odd, random feed when the baby has stopped exclusively having breastmilk. It’s just too labour-intensive for my brain to cope with! We shall see…

Anyway: gagging and spluttering I dealt with by feeding “upwards”, so that the baby was above the nipple and working against gravity. Really, the best thing to do would be to express off a bit of the fullness before each feed, but I’m simply not organised enough. By the time the baby is hungry, I’m just about alive enough to whip a boob out and latch him on there and then – if I had to try and foresee when he would be wanting a feed then I’d be at it all day, squirting into the sink and forgetting to put my breast pads back in and (sometimes) forgetting to put the actual breast back in, which was what happened the other week after I had been breastfeeding Ted in a field.

Anyone else have overactive breasts? Is it a “subsequent baby” thing? More common after the first? Or have I just completely forgotten the feeding days with Angelica already?! At which point can you safely stop wearing breastpads? Remind me. Make my day. I do love breastfeeding, but bloody hell is it hard work when you already have a toddler to run around after. 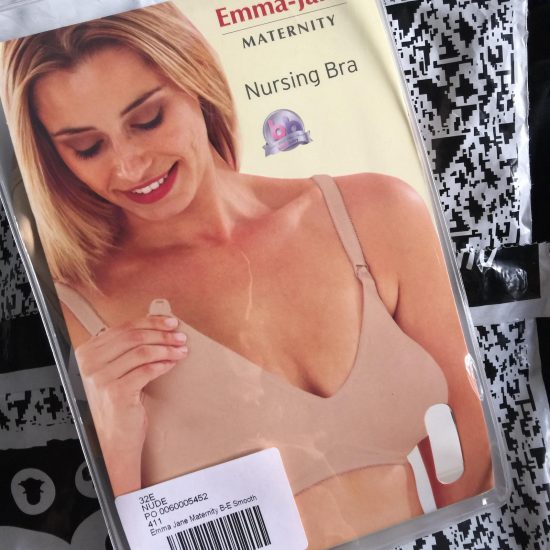 (By the way, the nude bra in the pictures is BRILLIANT if you want something cheap and cheerful that’ll go under any colour t-shirt or top and sort of disappear. It’s not remotely sexy, but it’s smooth, and it’s comfy but at the same time gives quite a good shape. I bought mine at ASOS here* – it was £19.)