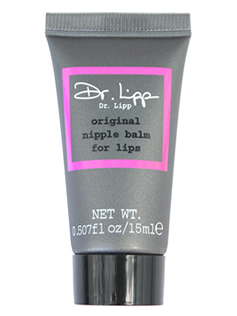 Well. I was going to amuse you with a photo of a nipple, and a photo of some lips and an anecdote about telling them apart – which, in retrospect, would have been pretty cringeworthy. But in actual fact, I didn’t even get so far as to start formulating my mini-comedy because the internet stopped me dead in my tracks. Boy are there some weird photos around – especially if you search for ‘nipple’ and ‘lips’ at the same time! Please don’t go off and do this if you’re under sixteen, or eighteen, or whatever the legal age is (three, if you’re in Holland!) because I refuse to be held responsible.

Before you go opening a new tab and searching nipples. let me just tell you about the nipple balm for lips from Dr Lipp. This balm has something of a cult status due to its ultra-moisturising properties. Originally used as a nipple balm (has that sunk in yet?) it soon became one of the beauty industry’s best-kept secrets – Oh! Scrap that term – I hate it! If it was a best-kept secret, how would we know about it? Brands don’t want it to be a bloody secret, do they? Nobody would buy it! Here we go again: originally used as a nipple balm, it soon became an extremely popular lip balm, great for severely chapped lips and skin.

This is a thick balm, thicker, I would say, than Eight Hour Cream (the other ‘secret’ – ssshhh) but, wondrously, doesn’t smell! Because, let’s face it – Elizabeth Arden’s Eight Hour Cream takes a couple of years’ getting used to before you stop dry heaving. Dr Lipp’s is 100% medical grade lanolin, and that’s about it – there’s no vanilla flavouring, no Disney sparkle, it’s just a straightforward lip rescue that can bring even the most destroyed lips back from the brink of death. It tingles slightly – on me, anyway, which I like, because it feels as though it’s getting to work! Once applied, it doesn’t ‘sink in’ but stays on the lips as a super-protective layer, pretty much until you wipe it off.

There we go then – use it on your nipples, use it on your lips, use it on your dry elbows. If you squeeze too much out, apply to lips and then use the excess on your cuticles. I do this all the time (have I said this before?) and I think that’s why my cuticles are never dry or split! I can absolutely see why this is a cult product – organic, hypoallergenic and paraben free;  a brilliant rescue remedy for damaged lips.