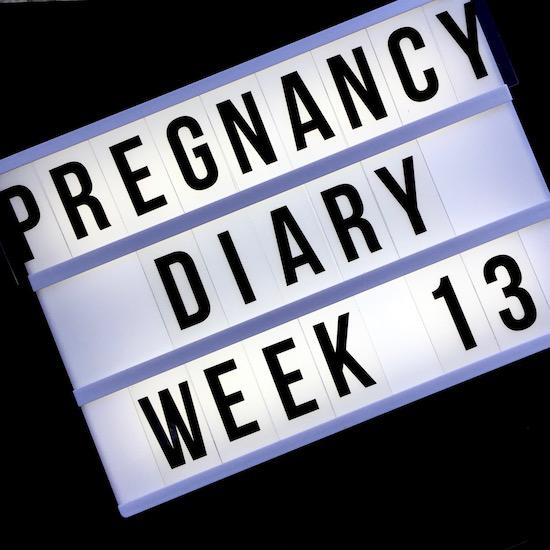 I’ve suddenly had a fast-forward to thirteen weeks! I had my twelve week scan and was a bit further on than I thought – I must have ovulated on, like, day 2 of my cycle or something. (No wonder it took so long to get pregnant the first time – I caught really early in my cycle that time too. I jest about it being “day 2”, but not by much…)

All good. Still sick and exhausted, but I only need to glance over earlier entries to realise just how much better I am feeling. I’ve been having a few niggly pains, which can be absolutely terrifying, but I do remember them from last time and I try to stay calm and remember that they are just growing/stretching pains. It’s weird that there’s so little written about cramps and abdominal pains in a lot of the pregnancy books – it has to be one of the most worrying things, yet you’re sort of left in limbo with them, wondering whether they are a bad sign or a good sign or what. Especially pre-scan – some reassurance would always be good, but it’s hard to find that!

Also: so untrue that morning sickness disappears at twelve weeks, as I’ve read in a lot of books. What is this magical twelve week number?! It was fourteen weeks for me last time and looking to be the same this time around – a quick scooch about on the forums tells me that it’s rarely twelve weeks for anyone.

I still have a terrible stomach – gas and all the rest of it – but I’ve worked out that it might be my Pregnacare vitamins! I don’t want to stir the pot here, but I’ve done some extensive testing, now, coming off them and then taking them again, and it does seem to be those that are the problem. I also feel less sick when I’m not on them. Again I did some forum research (oh, the best sort of research!) and there are loads of people complaining about the same thing! Now look, I don’t want to get sued by Pregnacare, I’m not suggesting it’s them, but perhaps something about certain pre-natal vitamins that is hard to digest or stomach? I took the Zita West vitamins in my last pregnancy and didn’t have these stomach issues, though I did feel just as sick..

So I have stopped. I take my Vitamin D spray and I am trying to eat a better diet, less Coco Pops, more veg. As soon as I feel right again, sickness-wise, I shall be on some sort of magazine-worthy fresh-stuff diet with home-cooked this and organically-reared that. Just you watch!