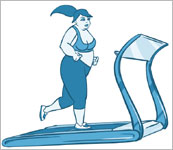 Disclaimer: before everyone starts raging on about how models are all too thin and shouldn’t be even thinking about changing their diets or exercising more, I’d like to point out that I have a healthy weight-to-height ratio (not that BMI actually matters a fig, but more on that another time) and that I have no ‘issues’ or ‘hangups’ about my weight, my body shape or my eating habits. I am trialling the Educogym plan for research so that I can pass on my results but also because I haven’t been attending my lovely Nuffield gym as much as I would like to and I want to really kick-start my fitness again. The Educogym plan replaces fat in the body with muscle and is carefully planned for every client – my body-fat percentage is higher than it has been for many years and I’d like to retrieve my lithe, lean and toned body from inside the soft little suit that I have developed over the top! So, all healthy and above board – this isn’t about losing weight, it’s about losing fat and gaining muscle.

OK. The Educogym, or what I’m nicknaming the Victoria’s Secret Plan, because I want to end up looking like a Victoria’s Secret model. (Again, disclaimer: before anyone starts harking on about the fact that I already look slim, I’ll point out that I’m a fashion model so yes, I do look slimmer than the average lady, but ‘slim’ doesn’t always equate to ‘healthy and toned’.) If I was overweight or obese, then I would undoubtedly lose quite a considerable amount of weight over the twelve day plan, but for me this is not about weightloss. I want to firm up and replace flab with muscle so that I look and feel leaner. I also want to balance out my blood sugar so that I can re-programme my eating habits long-term. It’s not a ‘crash diet’ or anything irresponsible, it’s a twelve-day plan that gets your body working properly. Muscle burns more energy than fat, so if you replace fat with muscle then it only makes sense that your body will work better long-term – you’ll burn more calories every day and also not have a load of fat surrounding your internal organs. Ew.

How does it work? Well, without going into too much science (which I’ll undoubtedly get wrong) it works in two ways. Firstly, there’s the eating plan which requires you to entirely cut out carbs (sugars) and eat protein coupled with quite alarming amounts of fat. After my initial gag-reflex reaction to this, I realise that it makes absolute sense. When the body has no carbs to burn, it burns fat (I have always tried to eat a diet that is reasonably low in carbs anyway) and eating fat is providing your body with much more energy than carbs ever would, so you’re able to build more muscle. Which is where the second part comes in:

The Gym. Fifteen minutes a day for the twelve days (or over twenty if you can’t manage to fit in those sessions) and it’s fifteen minutes of really quite intense work. Totally supervised to ensure that you do every exercise correctly, it works the muscles hard – it’s all weight-bearing but at an intensity and speed that raises the heart-rate. There’s no let-up during those fifteen minutes.

So, to pre-answer a few questions that I know will arise:

1) No, eating fat is not bad for you. That’s a common misconception. Eating loads of sugar and crap alongside the fats is bad for you! Eating smoked salmon and avocado and olive oil and nuts is not bad. Of course you wouldn’t want to only eat fat and protein long-term, but the Educo plan is for just twelve days, after which time carbohydrates can gradually be reintroduced so that you’re consuming a sensible, healthy amount that is practical and sustainable. A steak isn’t ‘bad’ for you, but a steak with chips and a couple of slices of white bread is. I have always eaten a lot of olive oil, avocado and cheese, and I have never been overweight. Never. You could argue that it’s genetic but I’m not so sure… I’m a greedy piggy but I don’t eat a lot of sugar and I don’t overdo the carbs. Surely not a mere coincidence there?

2) No, this isn’t a crash diet. I’m very careful about what I review on A Model Recommends because I realise that some things in this day and age can be very influential and controversial, especially when it comes to diets, fitness and body-image. So, this isn’t some weird ‘fad’ that I have decided to throw myself into – it’s a carefully considered, carefully managed twelve day plan that has been designed by experts.

3) Yes I will still be eating my greens. Spinach, broccoli, asparagus, green peppers, rocket, cucumber, herbs, loads more things still allowed, but not fruit and no potatoes. (Surely it goes without saying that cereals, breads, pastas and rice are a definite no-go! Anything with sugar in at all is totally banned.) If a long-term eating plan excluded tomatoes, I’d be worried – tomatoes are great for you – but for a twelve day ‘re-programme’ I can live with this restriction! The eagle-eyed amongst you will also note that the twelve day plan is lacking in fibre somewhat (totally?!) but again, for the twelve day period I have no concerns.

4) I am being closely monitored by the nutritional expert at Educogym (as is anybody who joins them) to ensure that the plan works for me. Obviously I don’t have any significant weight to lose, and Educogym have very clearly pointed this out to me too (full marks for responsible attitude) – for me, this is about toning and creating muscle and as a by-product, losing any excess weight that I’m carrying around my middle. (Which is, apparently, indicative of the fat that is surrounding internal organs. Ew again.)

5) As I am being closely monitored (at Educogym you attend the centre on Harley Street daily, so there’s plenty of opportunity to discuss fears and difficulties and for the instructors to evaluate your progress) and so I would not suggest anyone going out and trying this plan willy-nilly. What works for me may not work for you – the whole point of Educo is that it’s tailor-made, safe and do-able.

6) Yes, for your amusement I will be keeping a diary. I will also be revealing (at the end) my before and after measurements, body-fat and – *drumroll* – photographs. I also have Spousal Support in that Mr AMR has kindly agreed to do the eating part of the plan with me. That’s mostly down to the fact that I do most of the cooking and he probably can’t be bothered to have to cook for himself every day, but nevertheless, he’s doing it. So I’ll let you know how he gets on too!

So, here we go: the Educogym begins here – all in the name of research! Wish me luck…

(If you want a quick and easy ‘science’ explanation, you can find it on the Educogym website)