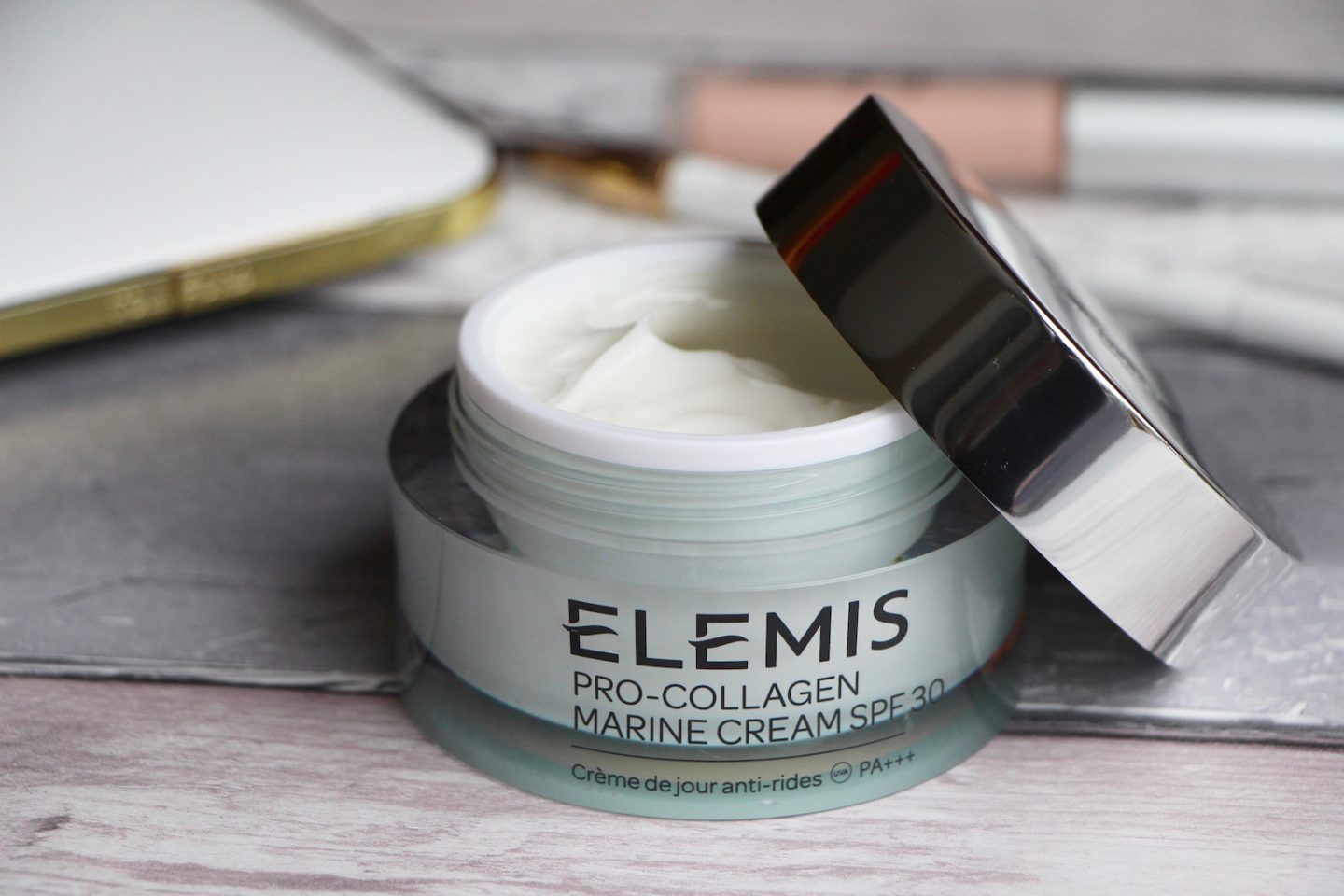 A surprise entry into my “favourite SPFs” category: the new Pro-Collagen Marine Cream SPF30 from Elemis. I’m a bit dithery about the original Marine Cream; I like the silky, fast-absorbing feel, but at the same time it doesn’t have quite the moisturising “oomph” that I want from a high-end cream.

And it is high-end, price-wise; I always expect it to be in the realms of fifty or sixty-ish quid, about the same as a pot of Lauder’s anti-wrinkle cream – but it’s £80 for 50ml. Twenty pounds more than Sunday Riley’s brilliant Tidal Cream, and twice as expensive as Elemis’s own Hydra-Balance Day Cream, which I think is a bit nicer than Marine.

But I don’t think that my opinion is by any means the norm – Marine Cream is hugely popular, and on virtually any consumer feedback section, be it Amazon or QVC or Makeup Alley, it has hundreds of positive reviews and five star ratings. My own mother is a big Marine Cream user because (she says, and I quote) “it’s creamy to apply but absorbs quickly. I like that it becomes a part of your skin rather than coating it and turning you into an iced bun. Also,” says Mother, “it has a gorgeous smell.”

I’ve always been a bit dithery about the smell personally – you have to really, really like a scent to want it on your face.

And so weirdly, because it has exactly the same smell as the original, when it came to the new Marine Cream SPF30 it was “love at first wear”. What a beautiful sun cream! So light and fresh-feeling, such a silky-slip to the application – you would never, ever in a million years guess that this contained SPF. It’s as hydrating as the original cream (so not rich or buttery, but does the job) and there’s absolutely no greasy residue. It absorbs quickly, it glides over the skin, there’s no chalky feeling or that weird sense of grubbiness† that you can sometimes get… I’m so impressed. 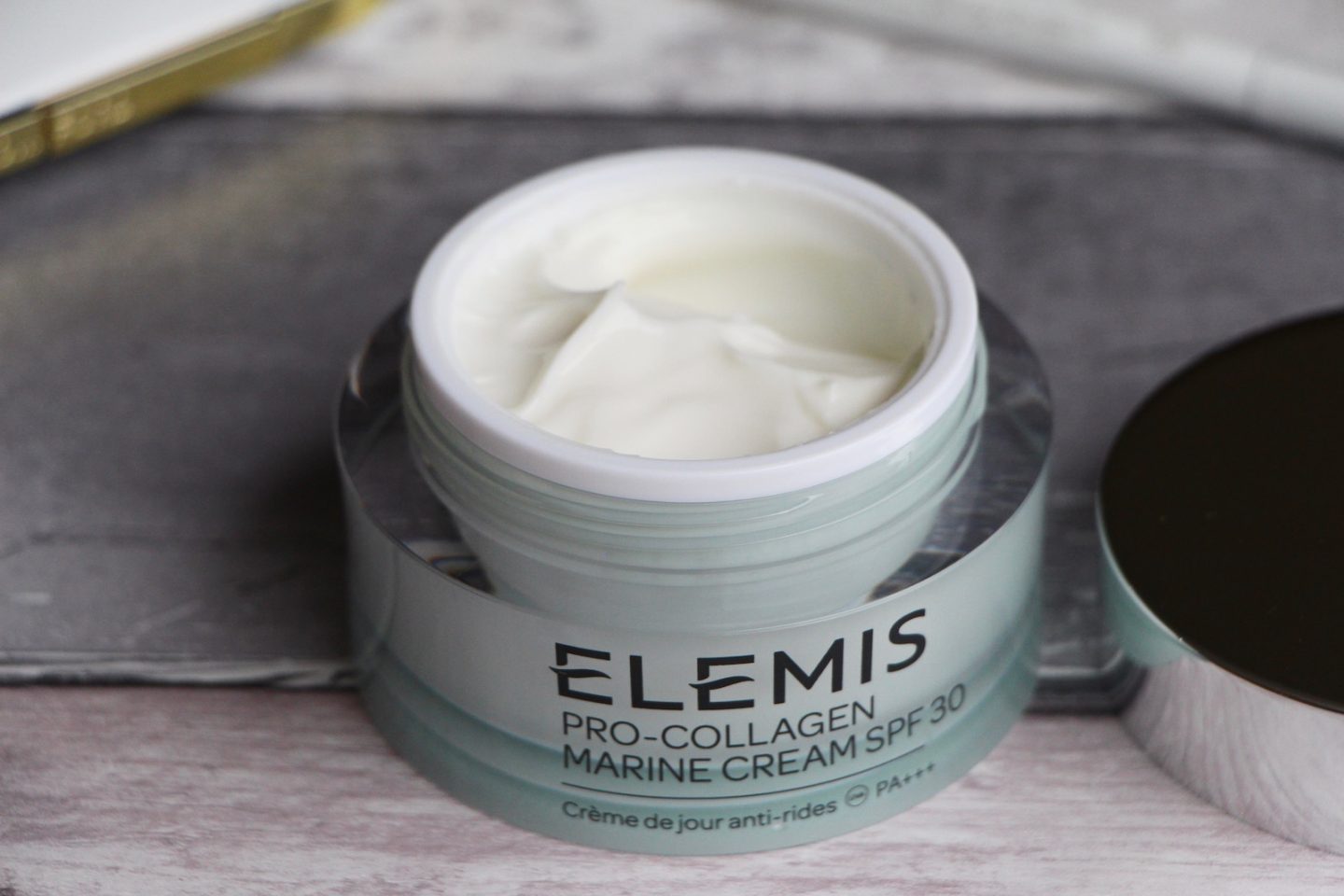 Marine Cream SPF30 makes all of the same promises as the original cream (that it reduces fine lines and wrinkles, increases hydration, gives a toned, firmed appearance) but ticks an extra (massively important) box in terms of keeping skin healthy and youthful, and that’s the broad spectrum sunscreen box. Admittedly, the cream is in a jar and so you’re never going to be taking this to the beach to reapply throughout the day (it would be a pit of grit within seconds) but for those who apply their SPF in the morning and don’t spend a large proportion of the day outdoors, it’s a lovely option. Luxurious in feel and quick to apply.

I can see that the Marine Cream SPF30 will have huge appeal to Elemis customers who perhaps don’t currently use an SPF on a regular basis – the fact that it’s pleasant to use might capture the beauty hearts of a whole group of people who have previously hated the textures and finishes of the sunscreens they’ve tried. I shall be interested to see the reviews on this, as and when they start to appear!

†grubbiness: please tell me that other people get this? You know when you apply a sunscreen and an hour later you just want to claw it all off with your fingernails because it feels as though you’ve spent a day cleaning out your attic and your face is covered in dust and dirt? Maybe it’s just me. Ugh. SPF grubbiness. I’ll have none of that here.