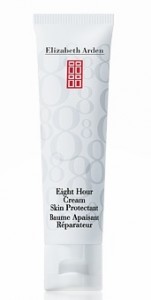 OK, so I know that this stuff isn’t new – everyone goes on about it, magazines feature whole articles about it’s uses (lip shine, cheek shine, sunburn, etc etc) and hardly a week goes by without a celebrity claiming that it’s their ‘can’t live without’ product. There’s a reason for that: it’s really good.

The Skin Protectant (I always thought that it was called a Lip Protectant, but it was evidently all in my head!) is a weird-smelling, thick, gooey orange balm that you squeeze out of a tube. If I don’t make it sound very appealing, that’s because it’s not; I can think of a hundred more attractive, sweeter-smelling balms than this. Eight hour cream’s appeal lies more in the way it performs; ultra-protecting and soothing despite it’s strong smell. Great for chapped lips, minor bits of sunburn (tops of ears, end of nose, the classics!) and even little cuts and scrapes.

Once I was forced to model swimwear ‘Up North’ in November. I say forced; I don’t mean that the clients actually dragged me out to a beach in a bikini, I was just broke and needed the money. Financially forced, then. There was a wind-chill factor of minus six that day and I received serious windburn, chapping to the extremities and purple welts where sand had whipped at my body. The make-up artist anointed me with Eight Hour and pretty much saved my soul from being completely destroyed beyond repair. The burns and chills seemed to heal quite speedily too.

The smell of Eight Hour (along with that of Elnett hairspray and MAC Face and Body) will be one that stays with me for many decades. It has been used on me so many times, in so many countries, that I associate it completely with being a model. I’ve had it applied to my eyelids as a gloss, I’ve had it rubbed into my dry knees and elbows, I’ve had it used to groom my eyebrows, and I can’t even guess at the number of times I’ve seen make-up artists using it with lip-colour palettes to give the colour a glossier, dewier effect.

My latest tube of Eight Hour has been with me for three years (that’s another thing: it lasts forever and doesn’t go off!): I bought it on a flight to Barbados. The tube before that? Bought on a flight to New York. Before that? Given to me by a make-up artist in Milan. So there you have it; Elizabeth Arden Eight Hour Cream is my little modelling companion-in-a-tube. A take-everywhere, use-for-everything work-horse. It’s not interesting, it’s not pretty, but it works.