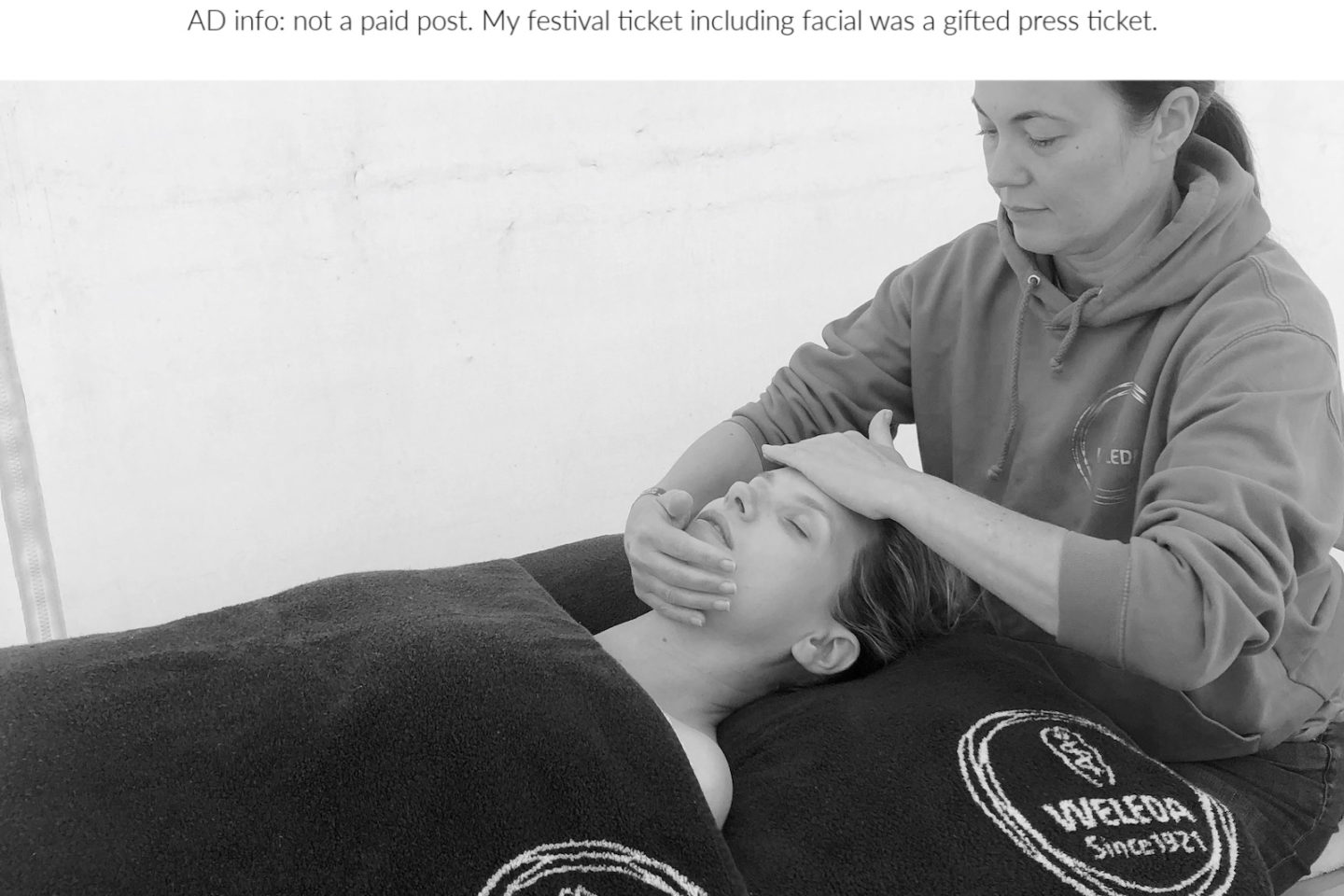 I had a facial in the middle of a field and I have to say, without any exaggeration or unnecessary embellishment, that it was one of the best facials I have ever had in my life. Perhaps it was partly due to the fact that I was at a festival with my kids (we’ll come back to that, I must have been mad) and the opportunity to lie still with my eyes closed was absolute heaven all on its own, but I think that mostly it was down to the highly proficient hands of my skilful Weleda facialist.

You may be wondering why on earth I would be at a festival with my kids: I asked myself the very same question approximately three minutes after arriving in the car park. As one child (Ted, two) screamed because we’d brought the wrong socks with us and the other (Angelica, four) repeatedly asked to see her new sleeping bag, like some sort of possessed battery-operated talking doll, the adults manhandled various large and heavy packages from the boot of the car onto the world’s smallest trolley.

People on social media always seem to make “festivals with kids” look fun. I’ve decided that they are either superhuman and find the whole thing easy or they’re completely and utterly mad and thrive on chaos, sweaty tents and dragging their small children around in glorified wheelbarrows. I suppose I just don’t see the point in festivals if each and every benefit of said festival is entirely obliterated by the presence of your children, who need constant entertainment, incessant feeding and who refuse to go to sleep. Ever.

And I suppose that I don’t even really appreciate the benefits of a festival full-stop, because a) I dislike camping and b) if I drink too much I get cystitis and cystitis does not mix well with festival toilets. Oh and c) I hate crowds and loud noises.

At ValleyFest, thankfully, there were very few crowds; if ever there was a “starter festival”, one to ease yourself in with, then this would be it. Just south of Bristol, set around a beautiful lake, it was more like a giant party than a festival – there was a friendly feel and a relaxed, sunny vibe. Yeo Valley were giving out free milk. There was a big tractor to help you take your bags up to the campsite. The loudest music stopped at 11pm so that parents could get some sleep. Loos were the type you get at weddings, with sinks and lights and so on, rather than the half-door monstrosities I’ve seen elsewhere. Best of all, Weleda (one of my long-time skincare brand favourites) were doing facials and hand massages and generally offering some much-needed respite and refuge to those in need of some TLC. 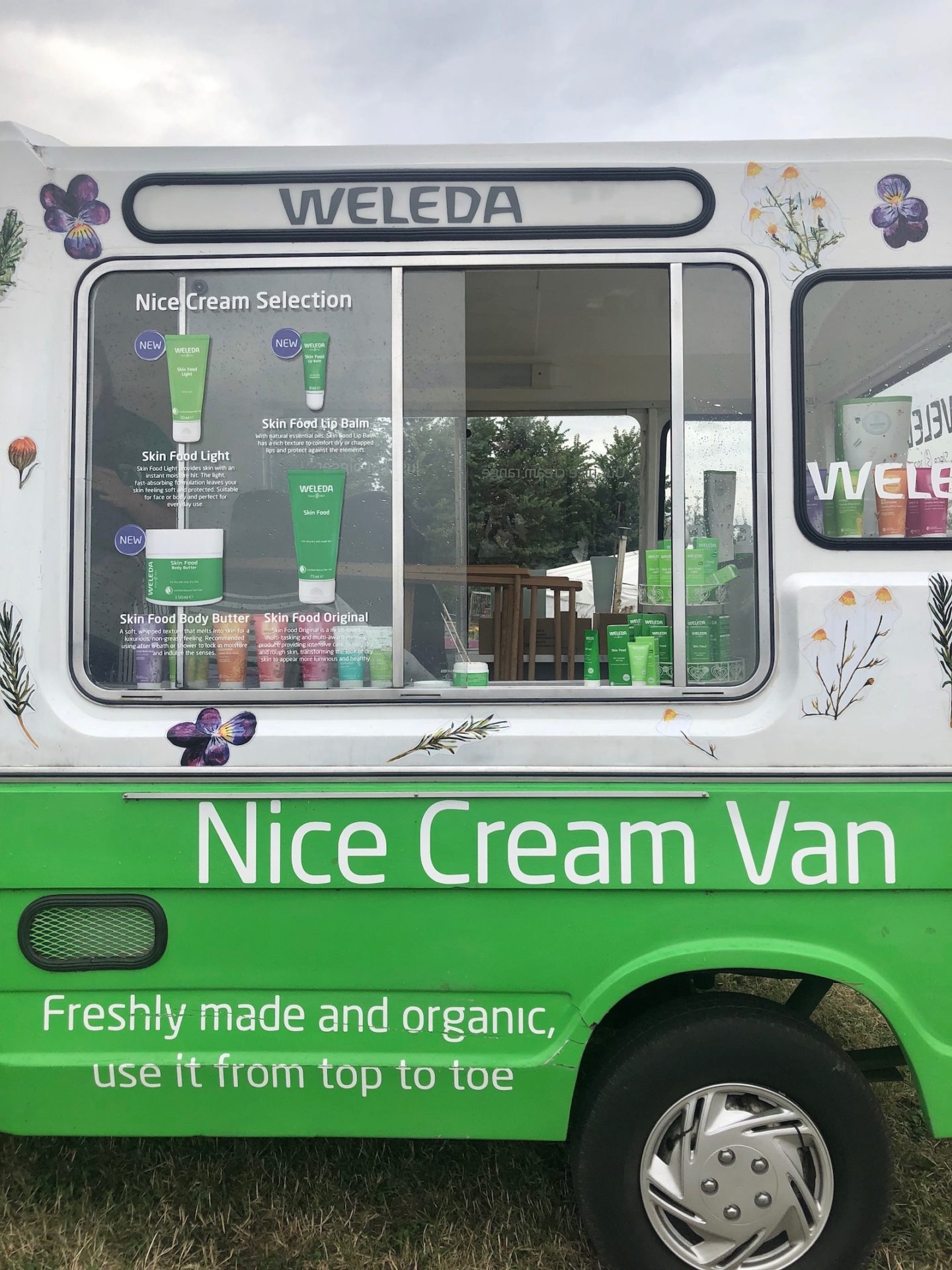 My sister and I virtually sprinted to the Weleda reception, so desperate were we to get ourselves into a horizontal position that didn’t involve an airbed. And the Weleda tent was like entering some sort of canvas sanctuary, one filled with skincare delights and gentle-voiced people. It was calming even with the booming of the bass from the main music stage, which was only a few dozen yards away. (A few dozen yards? Hark at me! This is how you speak at a festival.)

I started this post by praising the skill of my facialist and I shall praise her again; Megan had the hands of an angel. But a firm and thorough angel, not one of those ones with a soft and whimsical touch, not a weedy angel who administers facial movements with a whisper of a stroke here and a tickle of the nose there. (Can’t stand a tickle-touch, either in a facial or a massage. It makes me both uncomfortable and deeply annoyed. Tickling is such a waste of time. Don’t tease me, just get on with it.)

So yes, thankfully Megan wasn’t a tickler, the pressure was just right and – JOY! – she delved straight in with a massage even as she was cleansing my face! A cleanse with purpose! There’s nothing worse than a prolonged cleanse with eighty-five products, the sucking noise of cream being pressed onto skin punctuated by the frequent wringing out of the flannel right behind your head. If I’m going to be cleansed for more than a minute then I want the experience to have a sensory edge, ie an extra bit of massage that’ll make my eyes roll back into my head and send me into a state of unparalleled bliss.

It rarely happens, but it happened in my Facial in a Field. It was only a half an hour slot, which you’d think would be dire for your ability to relax, but I was in and out of consciousness for the entire time, and it felt like a week. I genuinely thought halfway through that the 30 minutes printed on the ticket had been a typo. It was sublime and more rejuvenating than a day in a posh spa. Half an hour! Thirty minutes! It takes me that long to remember the password for my online banking!

I often come out of a “branded” facial and feel a bitter disappointment that the focus of the whole treatment was on the products and not on the physical action. When the facialist applies four different masks, a scrub, five oils and all the time whispers the names of the products into my ear like some kind of subliminal messaging exercise. This is the Alvira scrub, the Alvira scrub, the Alviraaaaaaa….. But when a facial relies on very few products, it tends to become more about the handiwork of the therapist and not about ingredients. And this is what I prefer.

Last year I went for a very expensive branded facial (actually, a half an hour one again, I think it was at an event) and the products being used were all well over £150 each. I was treated to a running commentary about each one, what the benefits were, why it was being used, how it was being applied. I felt like saying “I never get to lie in silence with my eyes closed and be touched, just be quiet and rub my face!”

Which would have been rude, so I didn’t, but it was the biggest waste of half an hour. If I wanted to paste masks on myself with a spatula and listen to pointless chatter I’d do it at home. So well done Weleda for just choosing the most minimal product line-up and relying on skill rather than marketing spiel.

The products used in the Radiance Restoring Routine (which you could do yourself, albeit without Megan’s Magical Touch) are all massively gentle and gorgeous and have all, at one time or another, been included in my skincare favourites. Almond Cleansing Lotion (see my review here), Almond Soothing Facial Oil for massage and then Skin Food (see review here) used as a mask and then to moisturise. (I recently raved about Skin Food Light – you can read that review here, it’s a great alternative to the very rich and slightly greasy original Skin Food.)

I’ve whittled that product list right down to the bare bones, but I should point out that there were a number of extra twists and turns, including compresses using flannels soaked with Weleda bath milk (Rosemary to start, Lavender to finish) and eye de-puffers made from camomile tea bags. Nothing fussy, nothing outrageously priced and a clever use of their incredible bath milks. 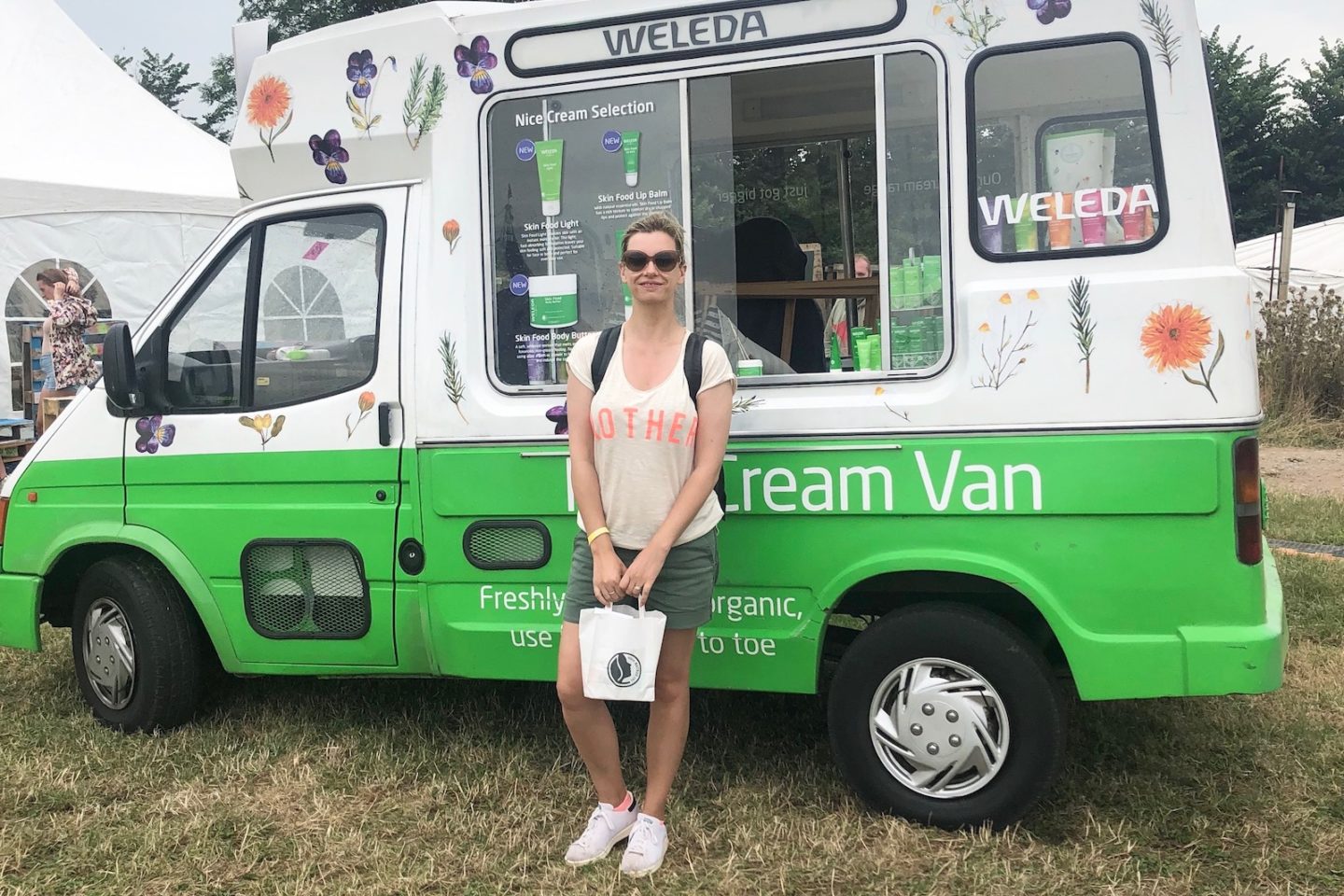 You can find a list of Weleda advisors, all trained in this facial routine, on the website here. There’s no dedicated place to go in and have the facial (please make this happen, Weleda!) but if you put your postcode in it brings up your nearest Wellbeing Advisors. If you’re in Cheshire then – lucky you – your nearest might be the wonderful Megan. I would highly, highly recommend. If I enjoyed my treatment in the middle of a festival field, after a sleepless night in a sweat box and Basement Jaxx anthems thundering into my brain, imagine how much you’d enjoy it in a normal situation. Knowing that you didn’t have to return to three crazed small people who had raided the emergency cool box and eaten six jellies, four packets of cheese Doritos and eight Ella’s Kitchen breakfast pouches.

The website for ValleyFest is here and my verdict on it, overall, would be very good. Incredibly clean, really friendly, great atmopshere and lovely setting. Just leave the small people with granny. We ended up absconding on the Saturday afternoon after our facials because the kids had reached fever pitch and we couldn’t sit in our tents because they were too hot. Packing up and getting our stuff back to the car without the help of the handy tractor was a low point. We had to do a version of the walk of shame through the middle of the whole festival; me carrying Ted, a backpack, two food bags and a Trunki, Mr AMR looking for all the world like someone who had spent the past few hours fighting zombies in a post-apocalyptic swamp. Families stared as we dropped tent pegs, fought back tears and ushered toddlers along, trailing the bedraggled ribbons of a broken kite behind us. It was grim. At one point I thought my heart was going to fail, but it wasn’t as bad as the time I nearly died of exhaustion, so it doesn’t quite make it into the over-exertion hall of fame…