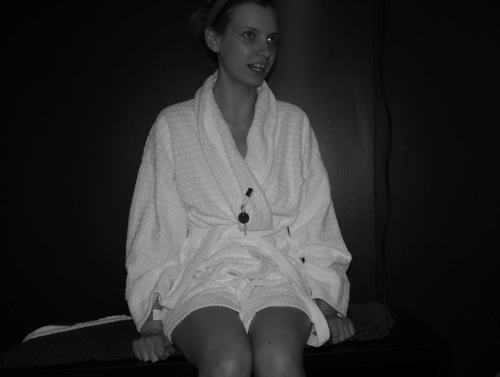 A couple of weeks ago I got treated to a Fish Pedicure at a spa in Norfolk. I’m not going to tell you which exact spa, because at present we (three friends and I) are waiting for a satisfactory response to the complaint that one of our party wrote.

Friend number 1, the birthday girl, treated us all to a fish pedicure and we gamely dropped our legs into the tanks filled with fish. If you haven’t yet heard about the Fish Pedicure, then I’ll fill you in briefly: the customer dunks their feet into tanks filled with hundreds of tiny Garra Rufa fish. The toothless fish suck away at the feet and remove dead skin, making the feet soft and smooth. This type of pedicure has become something of a craze throughout Asia and now in the UK.

Things that concern me about this fish pedicure craze:

1) Type of fish. The garra rufa is a silvery, orange-tinged fish that grows up to an inch long. Some of the fish that I have seen in various spas and in the spa that I was at to have my treatment are way bigger than an inch. I’d go so far to say that some of them were coming up for three inches long. Garra Rufa fish they ain’t! A quick bit of internet searching reveals thousand of similar concerns – apparently many places use the cheaper Chin Chin fish so that they’re not so expensive to replace time after time. Chin Chin fish grow much bigger than a Garra Rufa and – get this – they grow teeth. Ugh.

Treatment from Garra Rufa should feel gentle – a mild tickling sensation. Apparently if you feel a pinprick sensation then the fish are most likely biting, and not genuine Garra Rufa. The two friends who had their feet in the tank with the much larger fish could barely keep their feet in the water for more than five seconds at a time – they found the experience too painful. The lady that went in the tank afterwards quickly drew her foot out and said that she had been bitten – her ankle was bleeding! Which brings me on to my next point:

2) Infection and disease. If the wrong fish are being used then does this increase the risk of infection? And what if someone has a skin disease? A fungal infection? The attendant said that the UV lighting killed off bacteria, but…really? She didn’t check any of our feet for open wounds or cuts, blisters, rashes – she hadn’t been trained to. She just made us sign a form saying that we didn’t have any foot complaints. Hmm. I’m obviously not the only one with concerns, because here in the UK the Health Protection Agency is launching an investigation into the risk of infection spreading through open wounds – you can read the BBC coverage HERE. The tanks at the spa were visibly clean, and our feet were sprayed with some kind of disinfectant before we placed them inside – but is that precaution enough?

3) The fact that if the fish aren’t genuine Garra Rufa, the whole treatment is a waste of time and money anyway. My feet came out after twenty minutes looking exactly the same as they had done prior to the fish-feeding. God knows what those fish were doing, but it wasn’t getting rid of skin! Even little tags of skin that had loosened off during the course of the day (steaming, swimming etc) were still there, dangling. I could have flicked that skin off with my little finger, yet the fish didn’t eat it!

Can you tell that I wasn’t impressed? None of us were. I do, however, know plenty of people who have had the fish pedicure and been extremely impressed. There are reports of the fish curing all kinds of things, psoriasis being one. The fish pedicure seems to be such a mixed bag!

It’s not very often that I vent my frustration or anger here on A Model Recommends – if a product is terrible, or a brand is behaving abhorrently, I’ll quietly give feedback to the relevant parties. I’m not for all-out attacks over the internet. But I felt that this was something I really wanted to write about because it deals with potential health risks. I’ll be interested to see what the HPA turn up with on this one – the spa in question hasn’t come back with a positive answer to any of the questions asked, so you’ll have to watch this space!