It’s bloody miserable in London today – and once again I am damp from head to foot because my stupid H&M cheapo umbrella is so rubbish. I’m beginning to think that these cheap brollies are a false economy – they blow inside-out and then break after about three uses and because I consider them semi-disposable, I’m always losing them. So, I may invest in a new umbrella and here are five of my favourites: 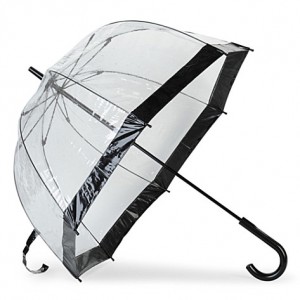 1. The Fulton Birdcage umbrella, £18 from Selfridges HERE. Covers half of my body yet I can still see where I’m going and won’t walk into walls. Bonus! 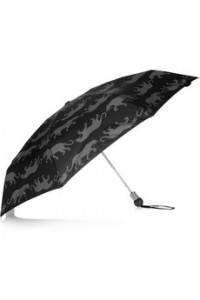 2. The Marc by Marc Jacobs panther print umbrella, £40 from Net-a-Porter HERE. To be honest, this looks to ‘shallow’ to be properly great at keeping off raindrops, but I like the print. So I can at least feel happy about that whilst my body from the shoulders down gets absolutely soaked! 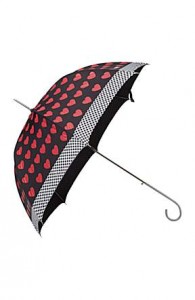 3. MOSCHINO CHEAP & CHIC Romance Heart Automatic Walker Umbrella, £65. I like the print, I like the handle, I like the extraordinarily dangerous-looking spike protruding from the top. Full marks – you can find it at House of Fraser online HERE. 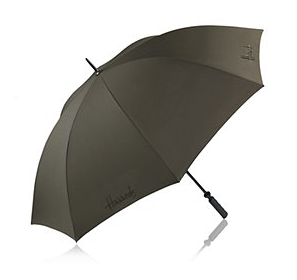 4. Harrods Golf Umbrella, £21.95 from Harrods HERE. One of those purchases that would make you feel finally ‘grown up’. I’d imagine. I like the idea of this umbrella, but in reality, it’s so huge that I would undoubtedly maim passers-by and end up getting arrested on charges of assault. I can barely control my limbs let alone an umbrella with a diameter the same as the moon! 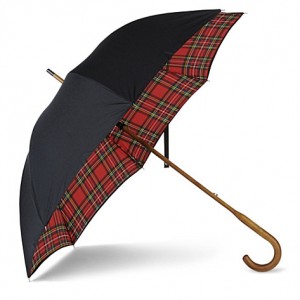 5. LONDON UNDERCOVER Royal Stewart umbrella, £65 from Selfridges HERE. At first I thought this was called the ‘Rod’ Stewart umbrella, which is why I even gave it a second glance. Of all the things to have named after you! Anyway, it’s not named after Rod Stewart so pointless pondering upon that idea. I like this umbrella because it looks exactly like my husband’s Harrington jacket – it’s as though Harry Potter has turned my husband into a brolly! This one is the smartest of the bunch, but rather expensive. If it will last me for years, though, it’ll still be cheaper than the twenty-eight H&M umbrellas I’ll buy in its place!