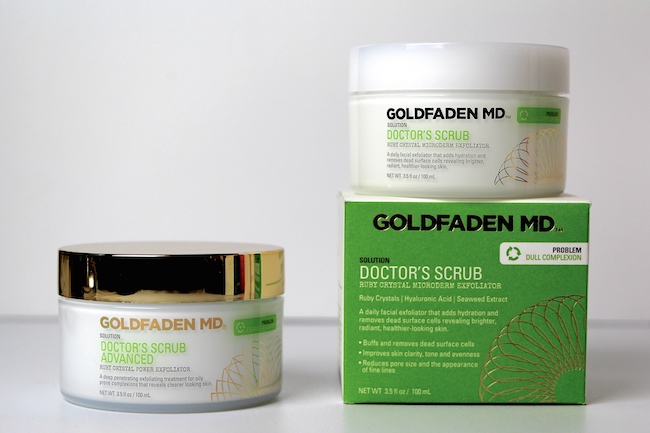 I wont lie: this is a face scrub for people who are serious about scrubbing. It’s the closest you’d ever get, I’d imagine (and hope!), to using a power-sander on your face. It’s for those people who have the facial equivalent of a cast iron stomach. You know those people who can eat anything – extra-hot pork vindaloo, five-day-old prawns that have been left in the heat, “meat feast platters”, weird, stinky fruits, week-old leftovers? Well. Goldfaden MD’s Doctor’s Scrub Advanced is kind of like an extra-hot vindaloo. It’s hardcore. Effective – my skin was possibly the smoothest it’s ever been – but bloody hell is this scrub strong!

It’s perfectly obvious just from looking inside the pot that the Goldfaden MD scrub isn’t going to be a softly-softly wishy-washy approach to exfoliating: it looks and feels like something you’d spread onto metal before buffing it up with one of those noisy power tools. It’s just pure grit in there – nothing creamy or rose-scented, nothing to dilute the power or dull the shock. It’s exfoliant for the practised: just millions of finely-milled ruby crystals and a very small amount of this and that to help it slide across the skin. (Also, some hyaluronic acid for moisture and seaweed extract for a spot of anti-oxidant action.) A tiny amount of this potent little scrub will leave your entire face, neck and chest smooth and glowing – just take a small amount and spread it over the skin, working it in very gently indeed, moving in little circles with your fingertips. I’ll stress the “gently” part again: you need to work this in very gently. 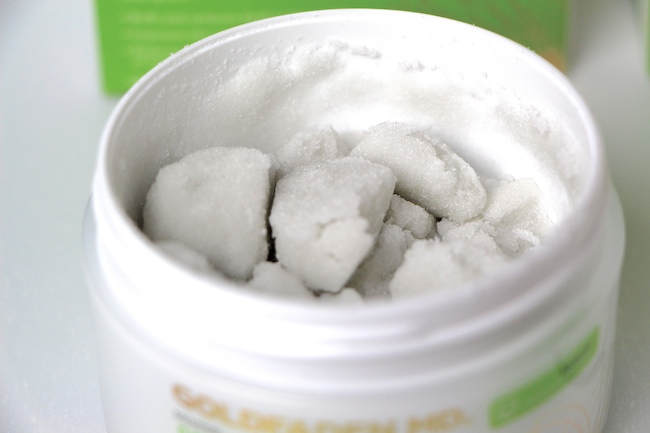 What I like about this scrub is that it’s a very effective way of achieving instantly smooth and brighter skin. It’s not for the faint-hearted and it’s definitely not for sensitive skin, but on me it had the same results – perhaps better – than when I’ve gone for microdermabrasion as part of a facial. Granted, the microdermabrasion sessions I had were a good few years ago now, as I much prefer AHA exfoliation to manual scrubbing, but I found the machine-led treatments to be far too harsh and I was worried after one of them that I may have permanently damaged my skin! With the home scrub, you can control the intensity (GENTLE) and avoid any areas you might have concerns about (little broken veins at the sides of nose) and it’s just generally a more pleasant experience, I think. And skin is left just as soft, just as smooth…

The Advanced scrub contains 100% Ruby Crystals which apparently are the purest mineral crystals that can be applied directly to the skin. They supposedly have healing properties and because they are perfectly spherical, they exfoliate without tearing or scratching the surface of the skin. Perhaps that’s why I got on so well with this scrub, despite being initially petrified by it! There’s a downside, for those who are keen scrubbers and fancy a test: the Doctor’s Scrub Advanced costs £85 for a pot (see here). Though that’s still cheaper than the equivalent kind of facial, and I reckon you’d get at least a year or so out of one pot, so in terms of “per use” value, it’s actually very good. It’s probably the most condensed version of a scrub you can buy – you’re paying for the real goods, not a load of cream or oil or whatnot to dilute it.

If however, you did want the diluted version then the original Doctor’s Scrub is £65. This one has the ruby crystals mixed in with a creamy, fresh-smelling base so that the exfoliation is gentler and less of a shock to the system. This still left my skin incredibly smooth and I think that it would suit a wider audience*, but in terms of impressive results I do think that the Advanced just about pips it to the post.

What do you think about scrubs? I feel as though they have gone out of fashion, a bit, in favour of AHA peels and overnight acid exfoliants, but I must say that they do have an instant effect and, if you just want that “clean as a whistle” feeling, nothing seems to beat a bit of scrub action! Has anyone else tried these? Give me your scrub suggestions below – I’m on a bit of a roll with my testing at the moment!

You can find the Goldfaden MD scrub at SpaceNK here. Though there’s a very interesting SpaceNK offer next week, so if you’re thinking of indulging, hold your horses and wait for my update…

*Often people with spots and blemishes want to scrub the hell out of their faces. Personally, though many people say differently, I would avoid loads of scrubbing if I had a breakout. If my skin is angry and sore, the last thing I want to do is take a scrub to it – acid exfoliants yes, and especially things with salicylic acid present in the formula, but abrasive scrubs? No. That’s just my own preference. I love scrubs for brightening and both of these worked very well on my oily patches during “PMT week”, but I’d tread more carefully if you have active breakouts.