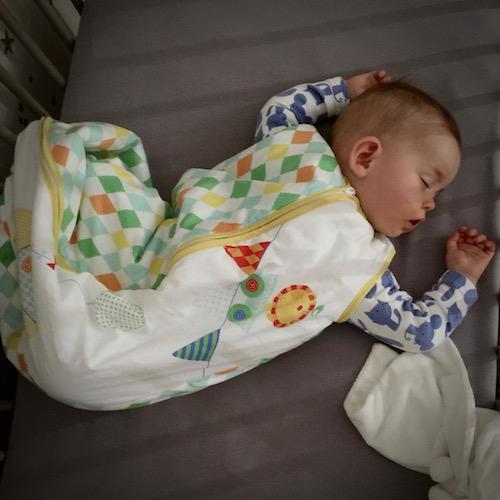 It’s sort of a lie, this title, because I actually don’t know if one singular thing made my baby suddenly sleep through the night. It might not have even been the combination of the things I’ve outlined below. It could have been (and I think this is likely) that she was just ready to sleep through the night. All of my Mum-people I know who have employed various techniques – including following Gina Ford, reading a dozen other books about sleeping – none of them really got their baby to sleep before mine. And I did nothing. Apart from wait.

OK, I did stuff – I’ve listed it below. But I strongly believe that this stuff just set the tone. It created the right conditions. And even once I’d done all of the things below, it wasn’t an instant fix – I’m pretty sure that we moved the baby into her own room at the end February, so she was 8 months old, and she first slept through a week or so later.

Bear in mind, please, that before this glorious development I had spent a month getting up EVERY TWO HOURS THROUGH THE NIGHT to breastfeed and had almost lost my mind. So, for those losing their minds: there is light at the end of the tunnel. It’s all a phase. In fact “remember it’s all a phase” is one of the best pieces of advice I’ve ever been given. I can’t even remember which friend said it, but it was definitely over wine. Never panic: it’s always just a phase.

Here are the things I think I did that helped the baby along with her sleeping – add your own in the comments, if you will. I think it’s important to remember (so that we don’t all get disheartened and want to put our heads in the oven) that every baby is completely different and there’s nothing “wrong” with them not sleeping through by a certain month. I know lucky sods who had sleeping-through babies by eight weeks, and poor sods who were still plugging away at almost three years old. Remember: there’s always gin. (For you. Not the baby.) So, things we (I) did:

Things that absolutely DID NOT work with regards to making the baby sleep through: giving her a bottle of formula last thing to “fill her up” (sure this is a total myth, unless you’re not producing enough breastmilk in which case maybe it makes sense), reading her a bedtime story, letting her “cry it out”. Good God. My nerves just can’t take more than a few minutes of crying!

Own stories, anecdotes, tips and comments please – there must be things I’ve forgotten. I’m stupidly writing this months and months too late – I should have done it when, you know, it actually happened…

UPDATE: quite a few questions asking the same thing, so I’ll add a note here.. We put the baby to sleep when she’s very drowsy but not actually asleep. She doesn’t have a bedtime bottle of milk (has it at 4pm for some reason!) so the routine is a little 30 minute tv session before bed, where she lies on one of us, already in her sleeping bag, and just sort of unwinds and sucks her thumb. Then we carry her to bed and usually (with any luck!) she rolls right over and goes to sleep. God forbid, though, we take her in before she’s ready – there’s all kinds of trouble!