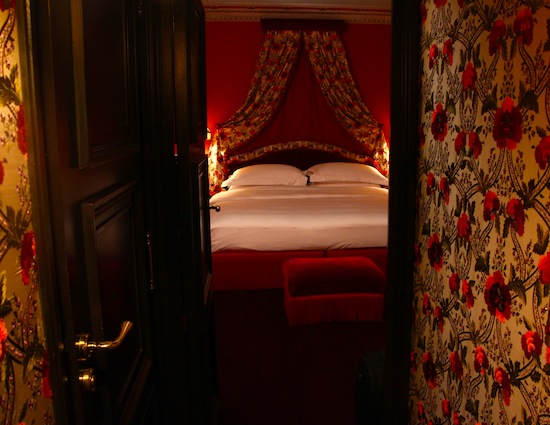 My latest travel and spa review, entitled Hotel Costes and the Capable Masseuse. Or, as the iPhone notes app autocorrected it: Hotel Coates and the Vapablassuer. What on earth is a Vapablasseur? I love it! If one doesn’t exist, then it should. I’d hire a Vapablasseur, wouldn’t you? It sounds like someone who would come and fix your cooker hood’s extractor fan – or encourage stubborn ghosts to leave your house via the chimney. But I digress, already, mere seconds into my review – I’d make yourself comfortable, if I were you. This could be a very long ride.

If you have never had the good fortune to visit to the seething hotbed of cool that is the Hotel Costes in Paris, then let me describe it using just three words: fragrant and dark. Very, very dark. These places have to be – it’s so that celebrities don’t get stared at and also so that you can’t see the bill when it’s time to check out. If you see the bill, you’re leaving yourself open to a coronary attack, and people popping their clogs all over the shop wouldn’t be very trendy, would it? They’d have to start keeping one of those heart jump-starter electrocution kits stowed away beneath the reception desk.

Let’s talk about the darkness. It’s a sexy, dark-red gloom that makes you feel like a dangerous, hard-drinking French revolutionary or some kind of high-class eighteenth century hooker. (One wearing miles of frilled petticoat and laced-up leather thigh boots which, incidentally, was exactly what I was dressed in when I stayed there last week. (Joke.)) The whole of the hotel, with its decadent wallpaper and its black doors and its long, narrow corridors, makes it seem as though you’ve simultaneously stepped back in time and stumbled upon the buzziest (and most fragrant) members’ club in existence. 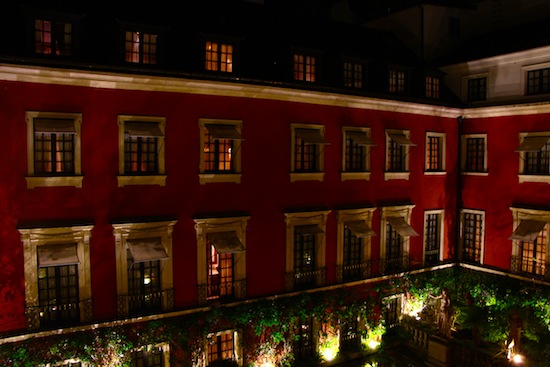 And really it is a members’ club, of sorts; not everyone will have the serious cash that’s needed to settle up after a stay at this place. The tiniest, tiniest rooms start at €500 per night – a standard room is €600 and still pretty small. These are the published rates on the website which I’d normally take with a pinch of salt; but unlike most hotels, there doesn’t seem to be another way to book the Costes and so I’m guessing that you can’t get a deal through booking.com. Properly exclusive, then, and not the kind of accommodation that you’d book in a flippant, off-the-cuff kind of way. For most, this will be a treat – a decadent dirty weekend or a pull-out-all-the-stops party night to mark a momentous occasion. 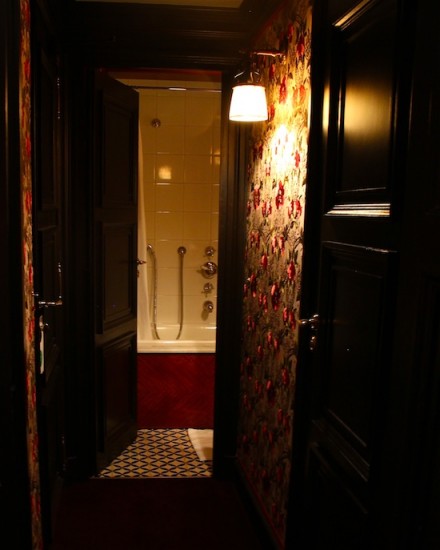 Do you like my “peeping Tom” photographs? I couldn’t have taken them any other way, really – the whole hotel lends itself to this kind of voyeuristic behaviour. Tucked away tables, love-seats in the reception that are half hidden by huge potted ferns… It’s the kind of place where everyone wants to be seen, but being seen is made as difficult as possible. Nicely ironic. But absolutely brilliant for people watching, especially if you happen to glance out of your bedroom window and lots of people have accidentally (?) forgotten to close their curtains. I spent a good few minutes marvelling at the number of “clear shots” I could get with my zoom lens – it would have been a pap’s paradise, I tell you! (And to the man in the room directly opposite: the second pair of trousers looked best. You should have stuck with them.)

To be fair, I probably gave a few people an eyeful myself – I’d taken off my jeans and put my tights on (attractive) before I realised that my curtains were rather sheer and hurriedly drawn the proper, heavier curtains. Thank goodness I hadn’t started on my evening lunges! Not that there was enough light in my room to do lunges – I would have broken my neck. You need a head-torch to find your way around the Costes; journey from elevator to bedroom requires careful negotiation, moving slowly and with flattened palms against the walls of the corridor. 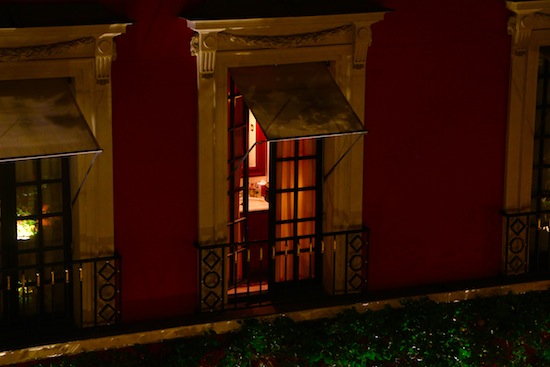 If I sound derisive about all of this then my apologies; I honestly don’t mean to. This is one of the most striking hotels that I’ve ever stayed in, purely for the overriding sense that you’re somewhere, that you’re already at a destination. You can throw on some heels and sashay downstairs and it’s all going on, if you point your torch in the right direction. It’s the kind of hotel that makes you feel like a rock star rather than a princess (for princess see Plaza Athenée) and it’s definitely the place to stay if you’re after a steamy weekend. The whole hotel is scented with the Costes own fragrance (a sultry, heady number) and the red and black interior design just screams Beautiful and the Damned. The only time that the darkness presents a real problem is in the bathroom, when you’re trying to put your makeup on. A good vanity mirror wouldn’t go amiss.

And now to my capable masseuse and the 90 minute Clarins treatment that took place in the dungeons. Dungeons or former wine cellar, I do not know, but I’d have happily been locked up there either way. As I used my supersonic bat hearing to guide me through the pitch dark to the spa reception, I could hear the faint gurgle of a swimming pool and poked my head around a door to check it out. It was wonderful. An underground, dimly-lit (bien sur) grotto that wouldn’t have been out of place in a Roman palace. It was exactly the kind of quirky-cool-pool I had been hoping for. 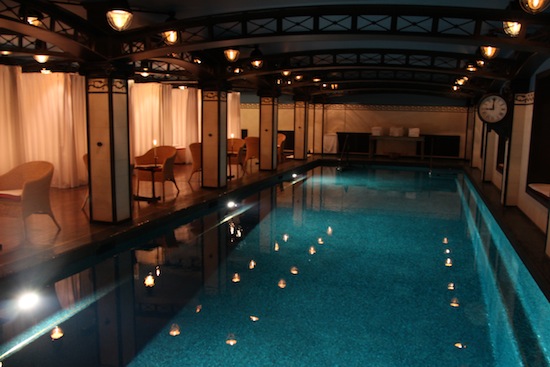 My therapist greeted me wearing the type of short-skirted, tight-topped tennis whites I would have thought only existed in teenage boys’ fantasies, but her apparel was of no concern to me. I needed a strong-handed neck-and-back overhaul and I was just praying that she would be able to deliver. I have to admit to judging a book by its cover: her physique, handily displayed, was promising. She looked like the kind of girl you’d have wanted on a Girl Guide trip-gone-wrong. If all of the pack leaders had been savagely murdered in the woods and there were six of you left, huddled in a tent, then this girl was the one who would have pulled a hunting knife from her knee socks and whittled a bayonet from the ridge pole.

She made short work of me – at one point I thought that the table might collapse. (Also at one point, I was sure she might have been on the table with me, getting better leverage, but there’s no way to ever know.) The massage was exemplary and I emerged feeling properly invigorated and ready to face the world. I’d highly recommend a 90 minute massage here; at most places this is too long and you start to get bedsores, but my therapist turned me at all the right points.

After the treatment I was free to lounge about near the pool in the little curtained-off bedroom areas and help myself to drinks and fruit and the daily papers. I didn’t do any of this, I just lay there with my companion Ree, discussing the curious sensation that is having your stomach massaged. (We both agreed that it was our least favourite part of the treatment, but also, perversely, our favourite part at the same time. This will make no sense, but know that having many pounds of flesh and organ manipulated about first thing in the morning is both startling and strangely pleasurable. It’s difficult to know where you stand with it, really. The jury is still out.) 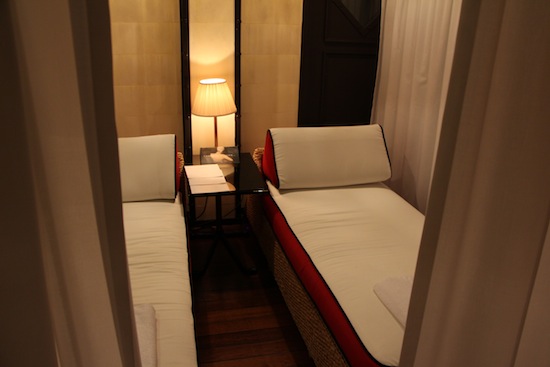 At any rate the massage was the perfect antidote to too much wine the night before (it would be rude not to have a drink at the bar – this hotel is all about the nightlife, after all) and an altogether different experience to the usual windchime-music-playing spa.

And now a note on the food, because I have eaten at the Costes many times but also at their affiliated restaurants around Paris, which serve the same menu. The lobster spicy pasta is gorgeous: 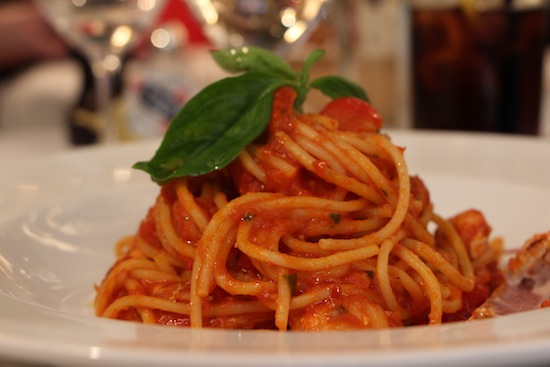 …and so is the burrata on the starters menu. Everything is pricey, as you’d expect (lobster pasta is €48) but there are no upsetting surprises. All of the food is fresh and tasty and non-distracting, leaving you to give your full attention to people-watching and soaking up the atmosphere.

I must say that if your ideal hotel is one that is silent, filled with white lilies and offers you thirteen types of goose-filled eiderdown to choose from, the Costes will possibly not be the one for you. Music from the bar and the terrace can be clearly heard in the rooms until late and I can imagine that a request to “keep the noise down” might be met with a snort of laughter; but the Hotel Costes is really a night-out-in-one. You don’t need to find a restaurant to eat at, or get the concierge to find you the best place to go out for drinks: it’s all going on, and just a few minutes from your room.

You find out more about the Hotel Costes on their website here and if you’d like to read about other places I’ve stayed and liked, please click here.