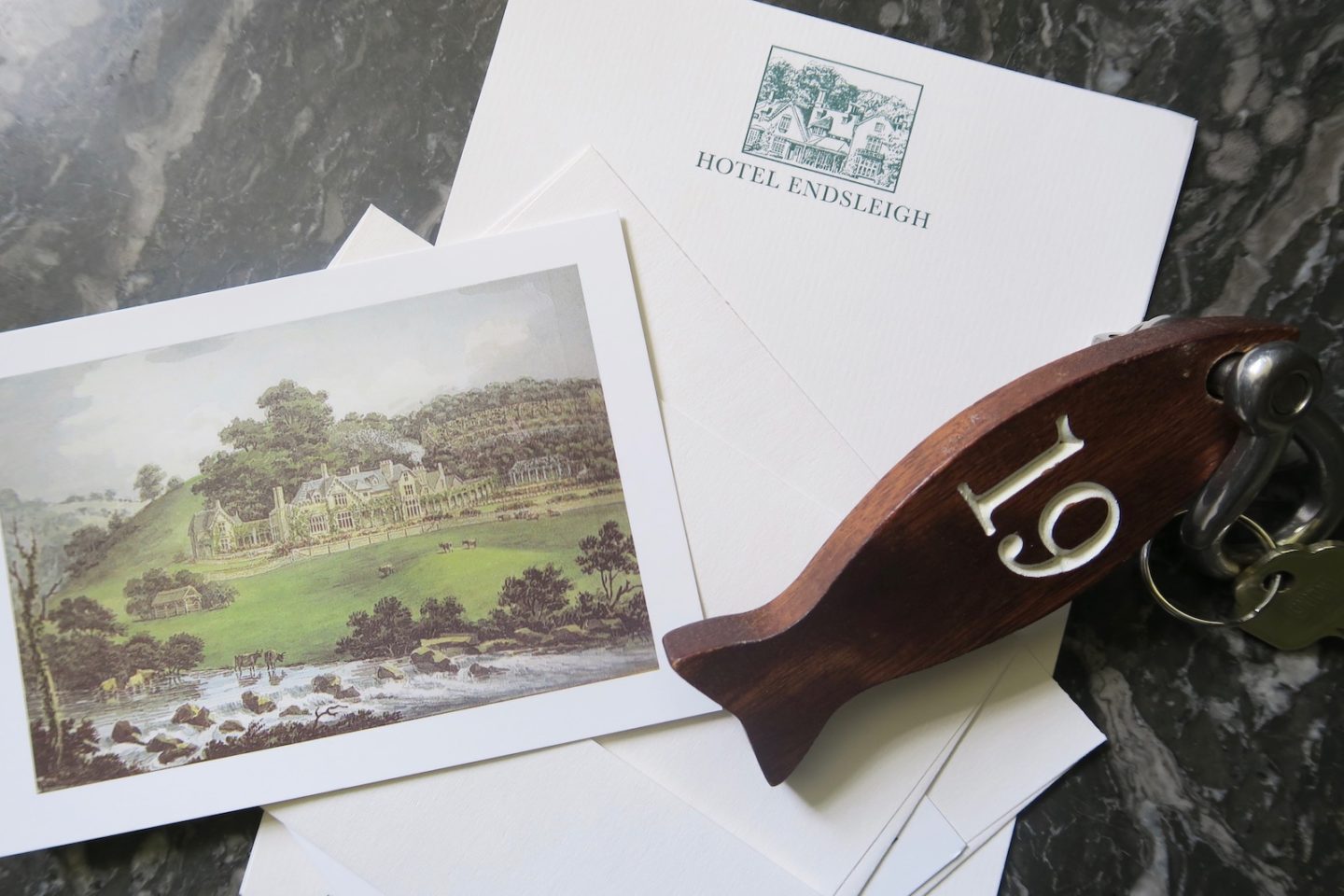 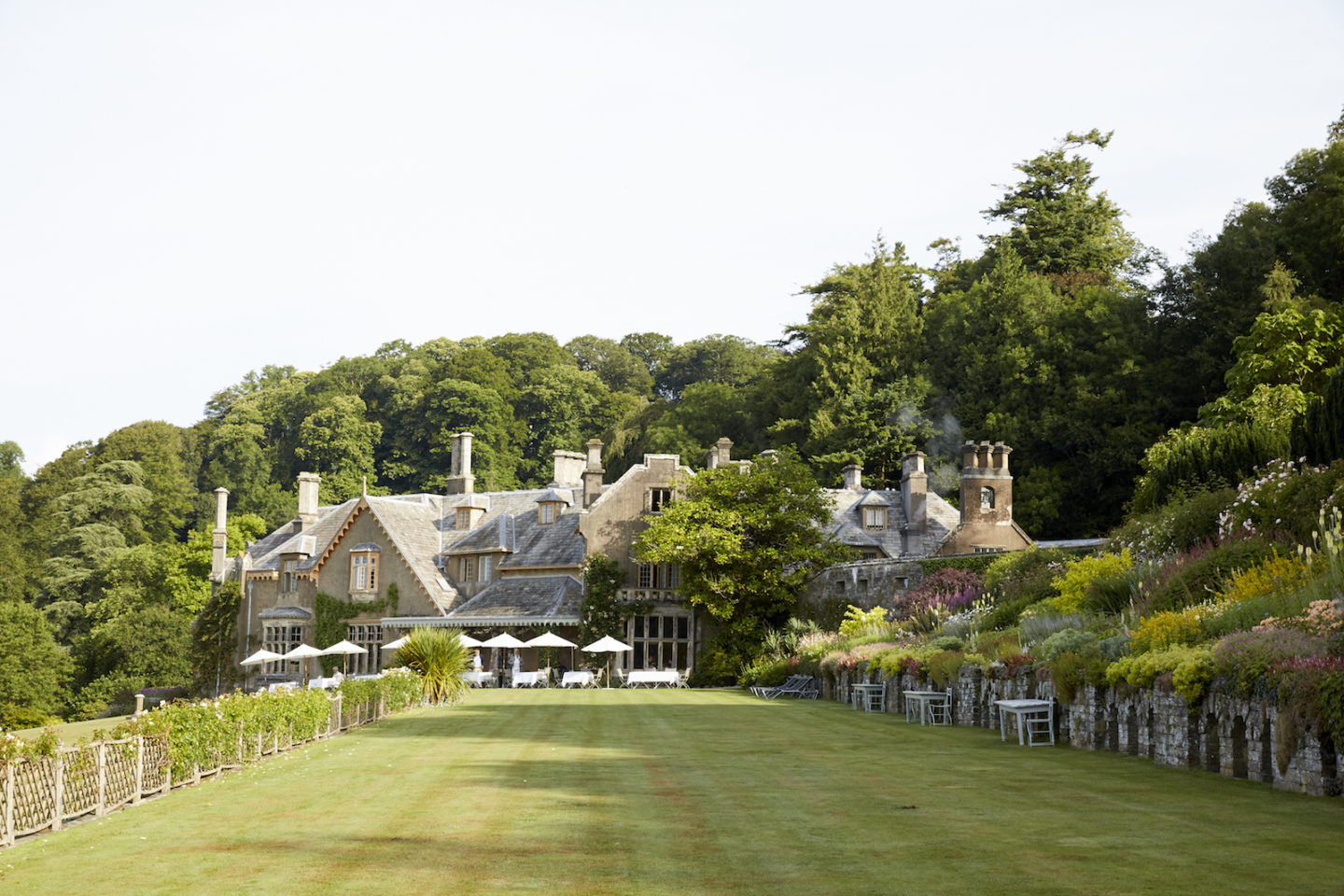 We went to the beautiful Hotel Endsleigh, which is a boutique hotel on the edge of Dartmoor and right on the border of Devon and Cornwall. Endsleigh is a Grade I hunting and fishing lodge and it’s surrounded by the most amazing gardens – they were designed by Humphrey Repton and are like something from a fairytale. 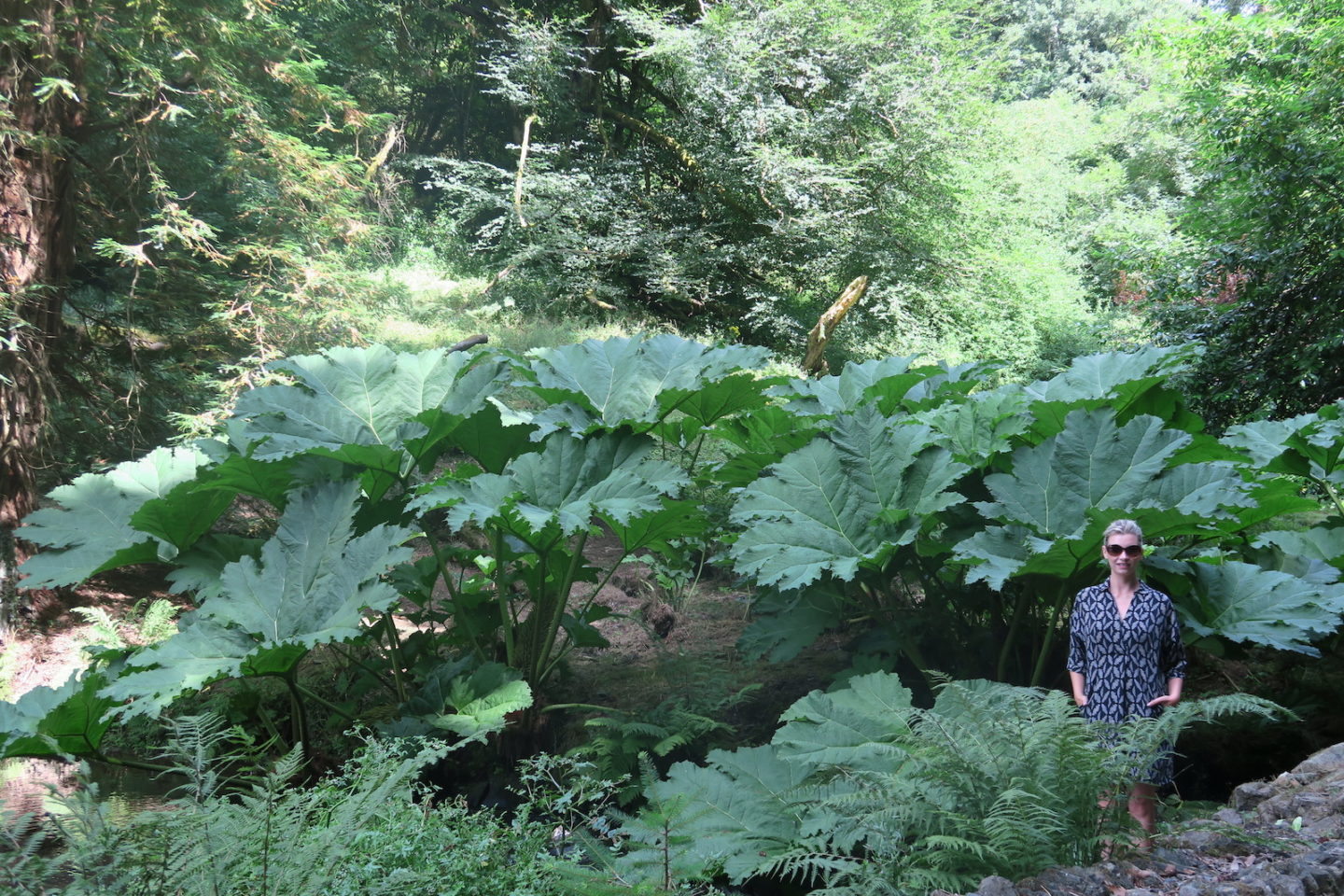 Little waterfalls cascading through banks of ferns, shell-lined grottos and a proper arboretum with rare and impressive trees. For a short break, there’s more than enough to see in the grounds of the hotel if you don’t want to have to get in the car – you can just hole up, enjoy the silence and take interesting rambles around the 100 acres that are at your disposal. 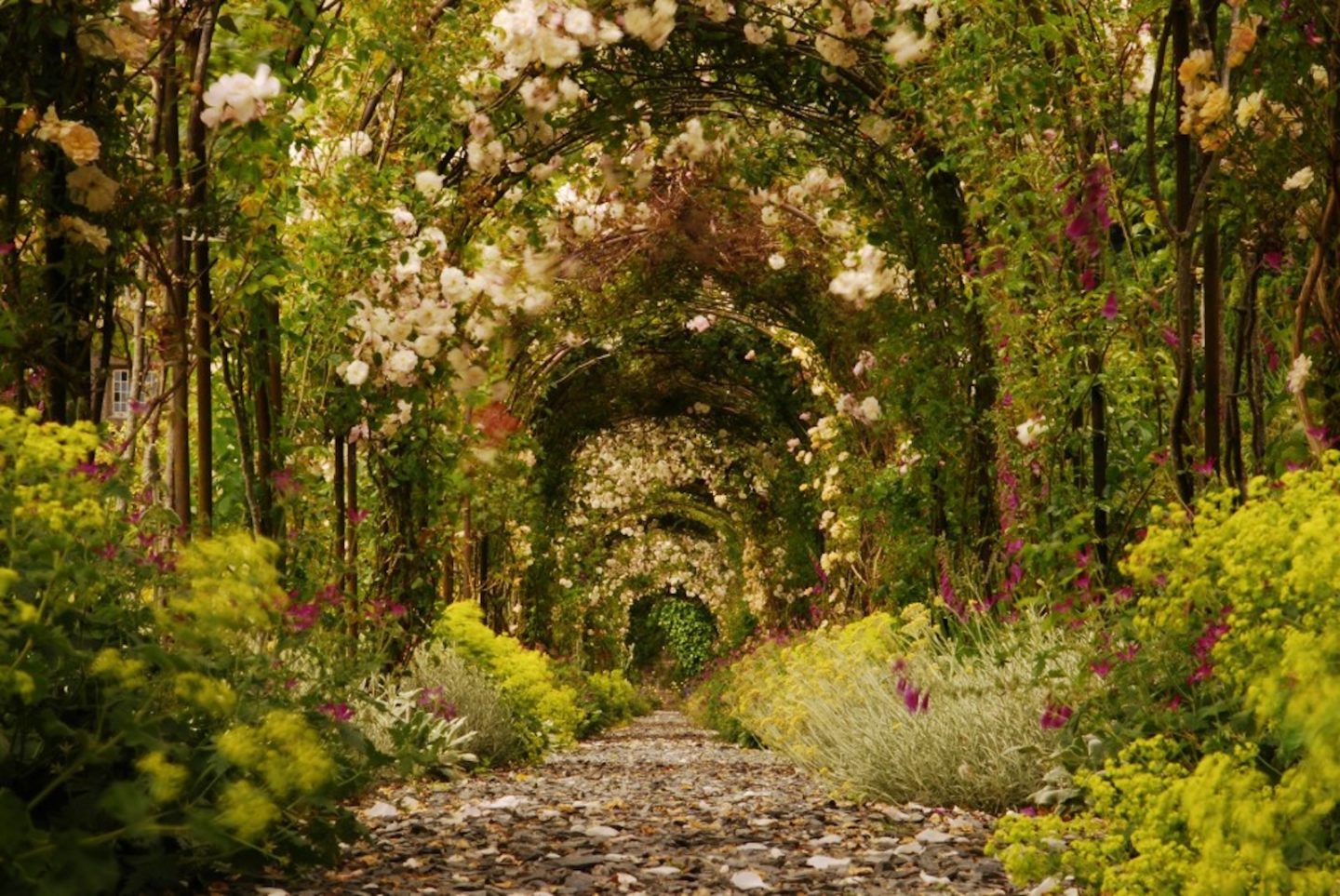 The hotel is perfectly pitched for people who enjoy good food and luxury accommodation but dislikes an overly-stuffy atmosphere – Mr AMR hates to be “waited on” (sort of a problem when we eat out, unless we go to KFC) but everything at the Endsleigh felt friendly and almost informal. Professional, absolutely, but chilled. Professionally chill. Is that a thing? 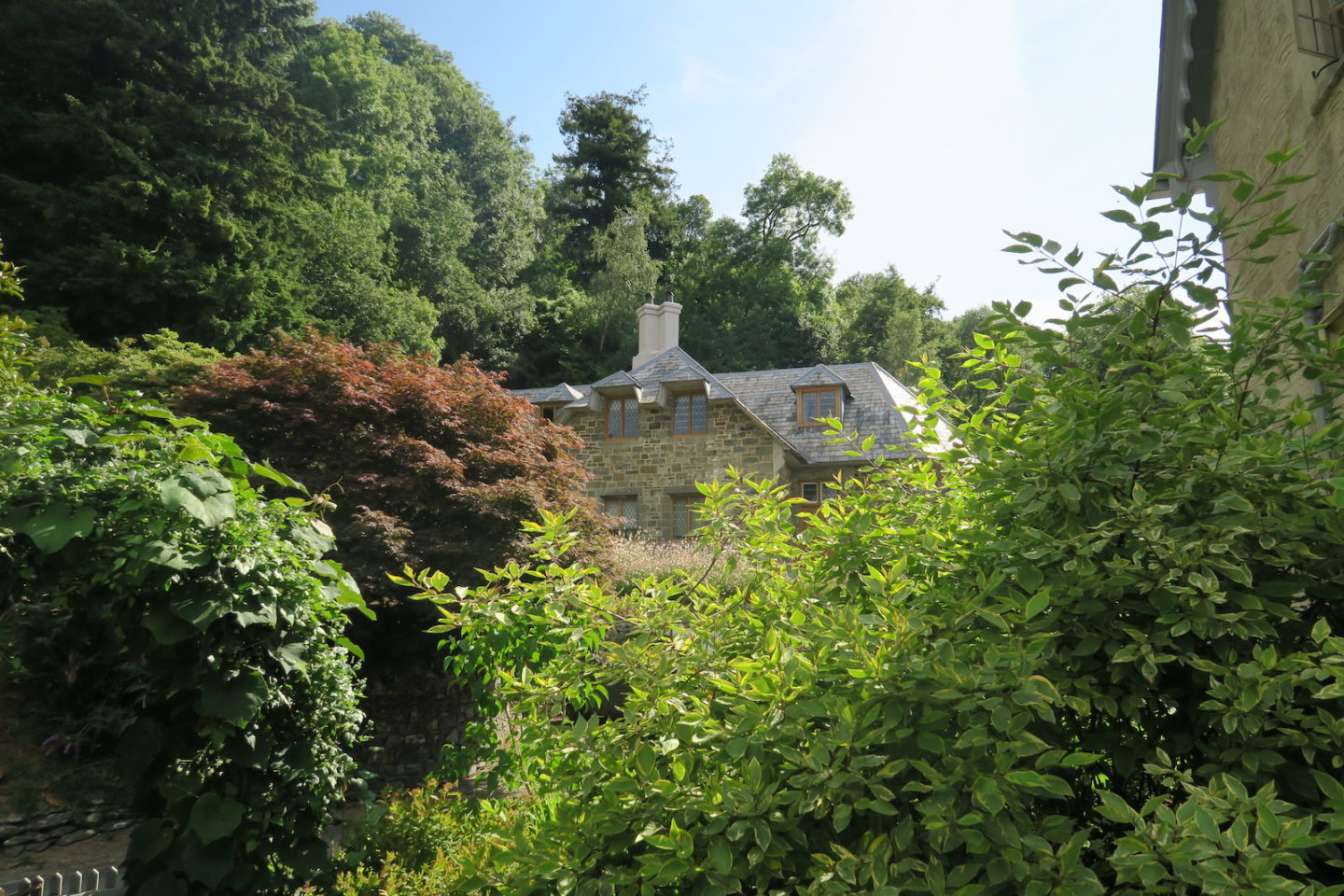 We had a room in the stables, which are slightly separated from the main house – see my talented photograph, above, where I think I have perfectly captured both the positioning and the beauty of the building. FFS. I have to admit that choosing between the grander main hotel suites and the more rustic garden suites took me the best part of an evening. I scoured TripAdvisor for relevant reviews and tried to get a glimpse of different angles of the rooms (what an earth is the matter with me, you’d think I’d have better things to do) but in the end I went for a garden suite because you can take dogs, and for some insane reason we thought it would be nice to bring Dexter. Dexter the mad cockapoo who often smells, who likes to wake up in the night and sneeze repeatedly whilst rubbing his face on the floor like a maniac, who likes to bark when he hears odd noises, who sits at the bottom of the bed and stares at you when there’s even an inkling that sex might be on the cards. 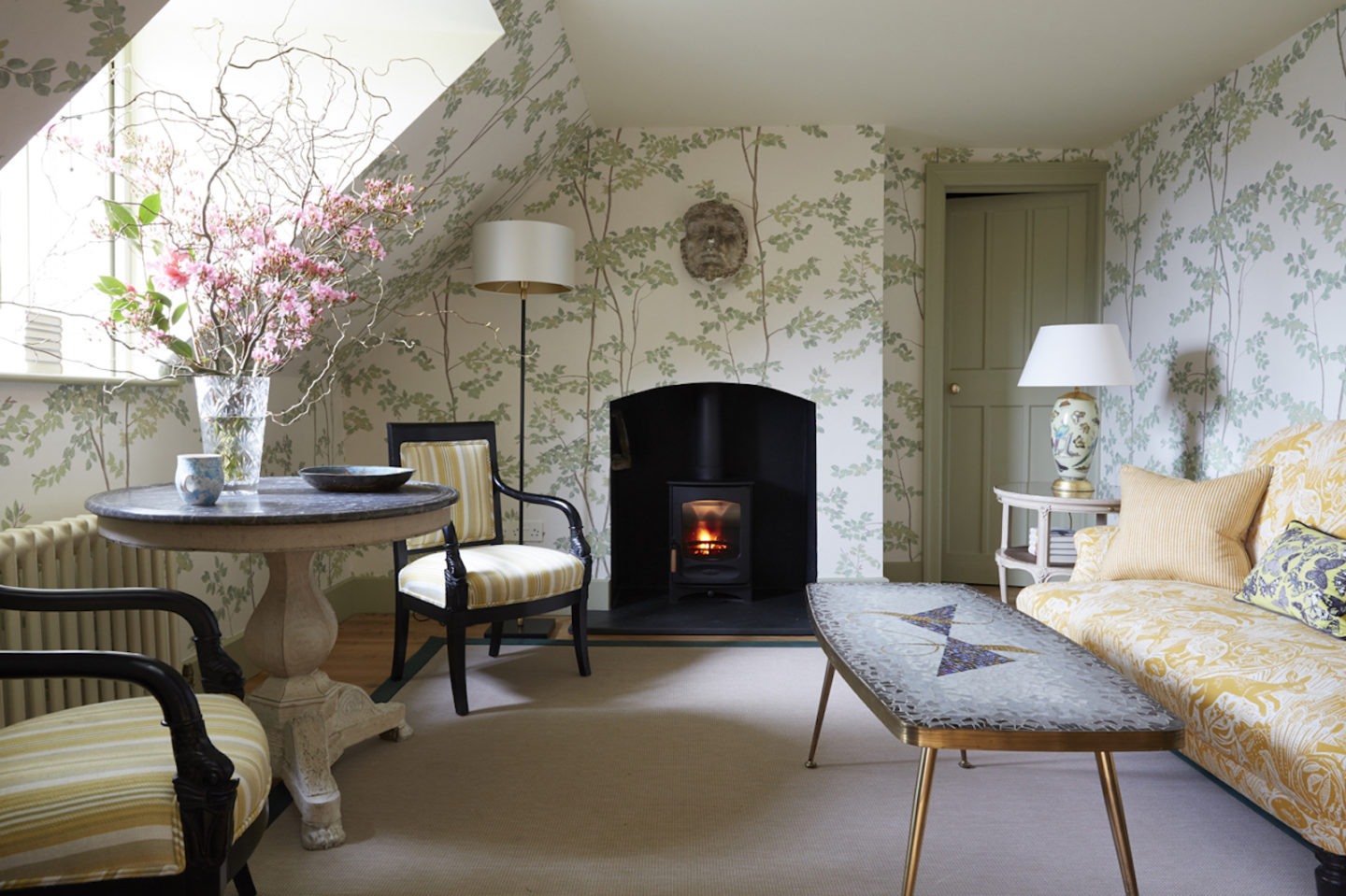 So yes we took the dog, and he was made to feel most welcome with his own bed and his own bowls – he had a great time running off through the woods and tripping through streams and climbing up the stony little banks. The garden suite (we were in room 19) had a little sitting room with a kitchenette and a spare loo (I’ve stolen a picture of the sitting room, see above!) and then there was a gorgeous downstairs bathroom with roll-top bath and double shower. Those who shower together, stay together. Or, those who shower together feel faintly ridiculous and end up smashing elbows and getting in the way of one another: “I just want to rinse my BLOODY HAIR!” 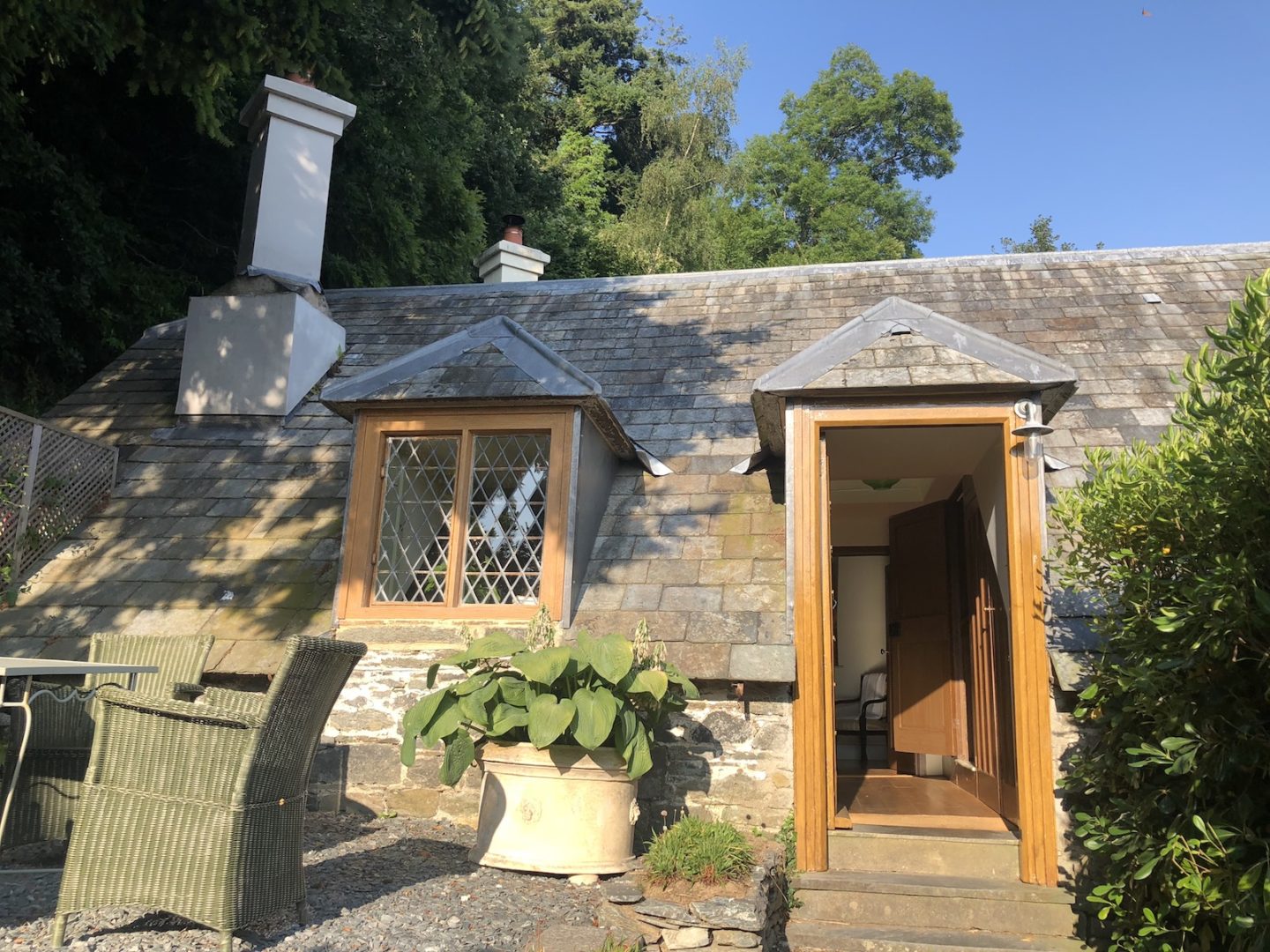 The bedroom was hidden behind a cupboard door, with a little staircase that led up into the roof. We both liked the sort of hobbit-house vibe that the suite had, as well as the patio space outside which was just the best bonus, especially as the weather was great. Everything was very tastefully decorated with a few quirky bits – more laid-back than true “country house” style, but comfortable and relaxing. I’m not sure you’d spend an immense amount of time in the weeny lounge bit, but I did like that it was totally separate, which means that a) you can shut the dog in if you do decide that ten years of marriage is worth celebrating with a quick shag and b) one of you (him) can watch the telly if the other one (you) wants to read a book in peace.

The suites in the main house look a bit more traditionally luxurious than the garden suites and appear (from my Google-sleuthing) to have excellent views over Endsleigh’s lands. I would probably plump for one of these next time (and there will be a next time) and leave the dog at home. 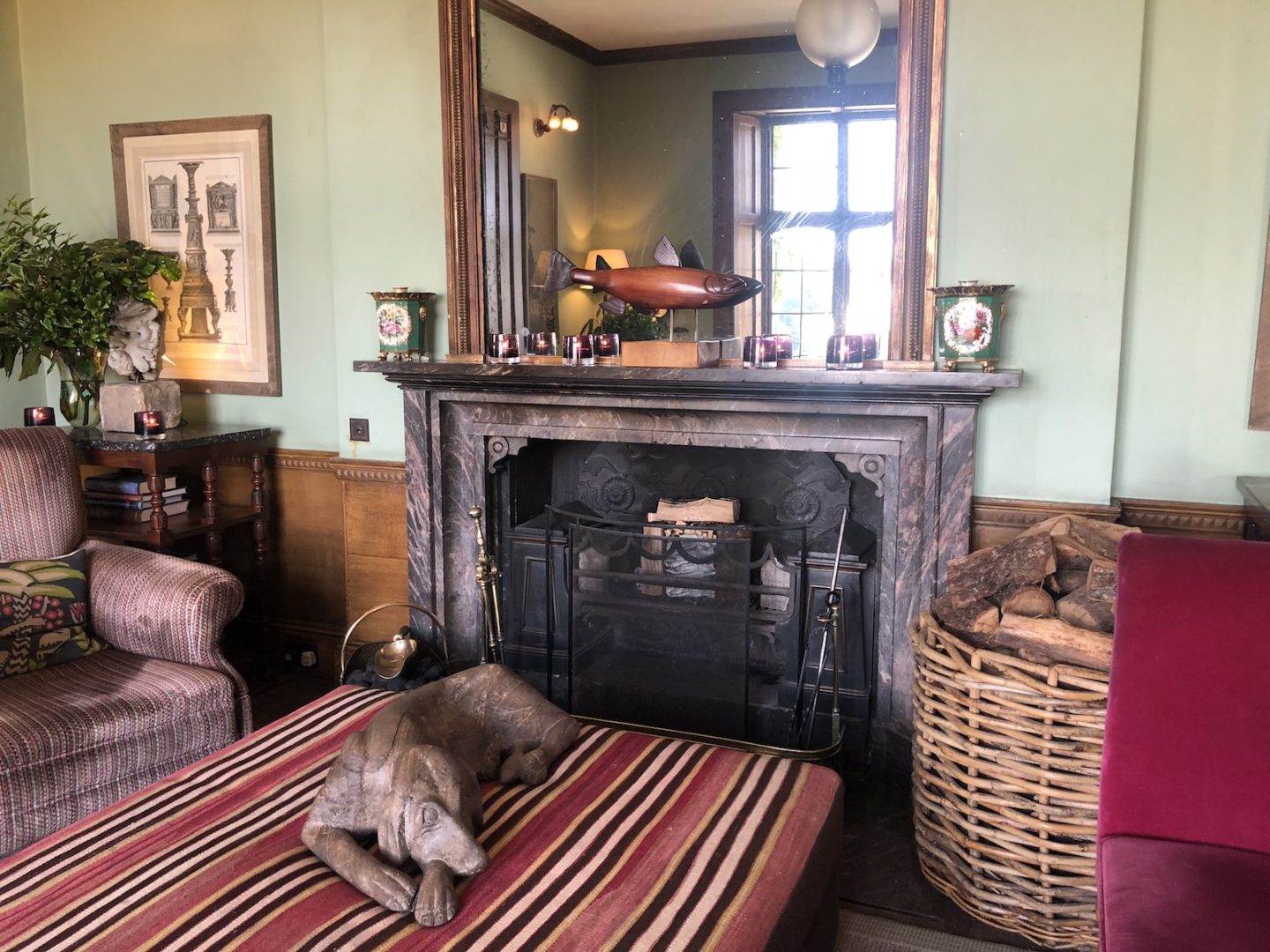 There’s a very real – and delightful – feeling that the hotel is not really a hotel. The reception is tucked away to the side of the main hall, and the dining rooms feel distinctly relaxed, despite the service and food being outrageously good.

We had dinner in the restaurant on both nights of our stay – the menu was ever so slightly different both times – and I honestly couldn’t fault a thing. Dishes were magically rich and delicate all at the same time, so we stuffed ourselves yet didn’t come away feeling nauseous, as we usually do when we go to town on celebratory meals. The atmosphere was brilliant – it was fully booked in the restaurant on the second night, pretty busy on the first, which was a Wednesday – and I would describe the vibe as contented and convivial. The tables are quite close together, but I didn’t feel as though everyone could hear what we were saying (good job, probably) – there was just the simmer of happy voices and the clink of cutlery on fast-emptying plates.

I wish I could tell you what we ate, but I didn’t write it down – I do remember that the something-something with goat curd was so good that I had it twice. Also, the desserts: I could have eaten them all. In a row. Nothing was a disappointment. 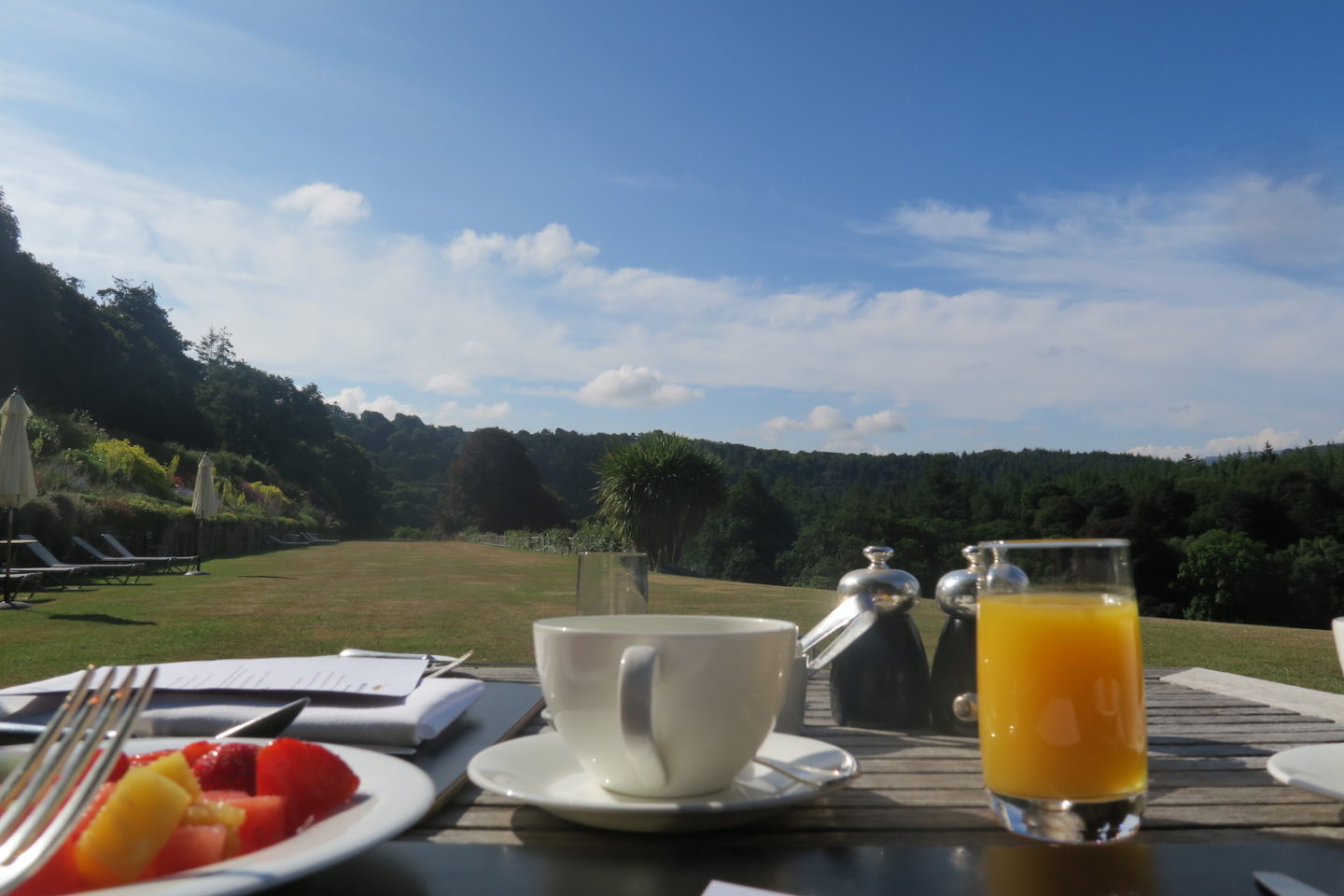 It helped our trip that it was plonked right in the middle of the heatwave – nothing is more joyful than being able to sit outside and have a pre-dinner drink in England. Without an umbrella up. Or a jumper on. God, we felt so grown-up – I don’t think we’ve ever done “pre-dinner drinks” before, but we kept moving the time of our dinner reservation and then realised that we were ready too early, so dondered on down to the terrace. I had a margarita that almost knocked me out cold (total lightweight these days) and Mr AMR had a G&T. Just in case you were wondering. 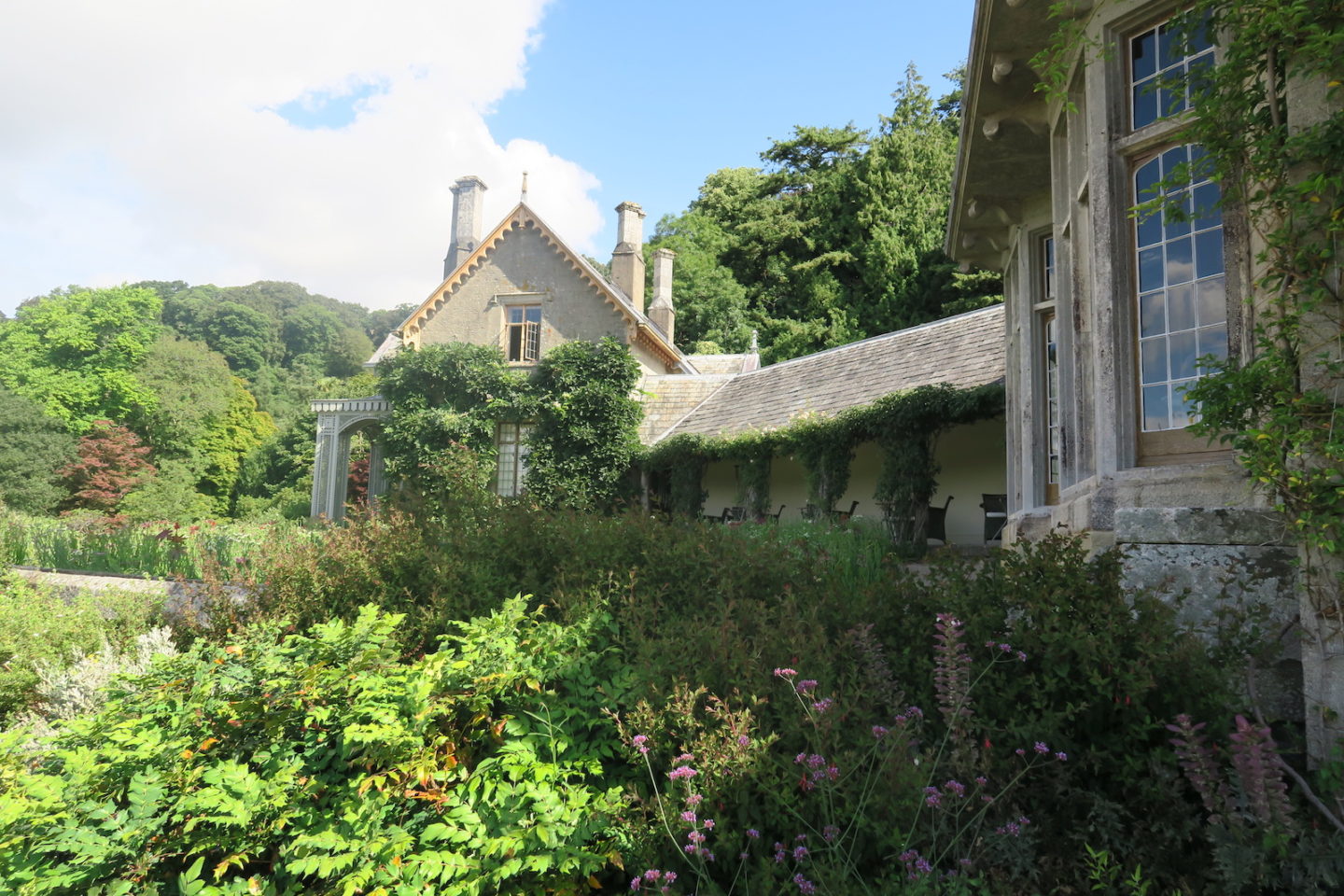 It was a bit of a gamble, going for the Hotel Endsleigh – we weren’t really familiar with the area, and we quite like going to places on the sea – but I have to say that the stay was quite magical. It seems like madness to leave a house in the country to stay in another house in the country, but this felt like a proper retreat – no phone reception in our room, patchy internet throughout, people wandering around with fishing rods and flat caps on… You could squint and imagine you were in an entirely different age.

We paid £370 per night for our room and dinner was £50 each. Rooms in the main house start at £190 – if you book through Mr & Mrs Smith here* you get a free (incredible) afternoon tea for two, with scones and sandwiches and pot of excellent tea. Otherwise the hotel’s own website is here.