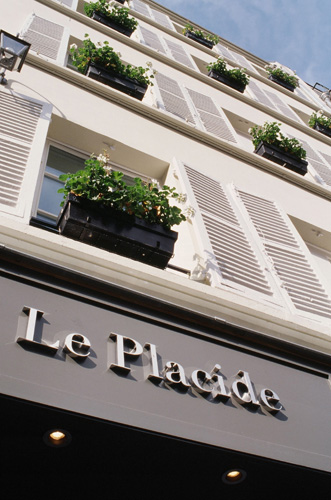 A couple of weeks ago I took myself on a little trip to Paris. I have been to Paris more times than I can remember, but this time was very different because I was visiting for pleasure and not for business. Usually I am in Paris for one of two reasons; a direct booking (a paid job where the Parisian client whisks me in for the day, or a couple of days, to do a shoot) or to be ‘on stay’, which is when you basically live in the city for anything from a week to a few months doing castings and – hopefully – getting jobs.

Although I know Paris reasonably well, it is through random studios and offices on random, little-known streets, and not through the tourist areas or the main landmarks. I couldn’t, before this last trip, have told you where the Eiffel Tower was, for instance. I knew where the Moulin Rouge was because I once stayed in a Citadine apartment in Pigalle, but I wouldn’t have been able to direct you to the Louvre. Chanel’s offices, yes. Pin-Up Studios, yes. The Notre Dame? No.

So it was with immense pleasure that I embarked upon my tourist day out in Paris. Armed with my A-Z (a model is never without!) and an umbrella I marched about the city going from one sight to the next without once taking any form of public (or private!) transport. It was just me and my legs. By six in the evening I was just about ready to collapse, and I did so at Hotel Le Placide, a sleek and sexy boutique hotel in the St Germain area. I was in a Junior Suite – room 21 – and it was the perfect base for exploring the city. 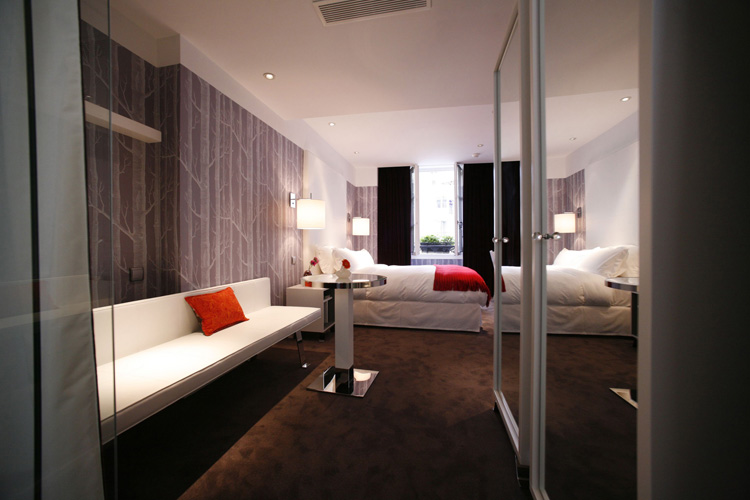 Le Placide has just 11 rooms, 2 on each floor (the top two ‘exclusive rooms’ have a cute balcony and views over Paris). As you can probably guess by the fact that there are only two rooms on each floor, the floors aren’t that large. In between the rooms there’s a tiny lobby that the teeny elevator opens out into, and beyond that there’s a staircase. Because the doors of the two rooms or quite close together, you can hear every ‘coming and going’ if the other guests choose not to close their door quietly, but I didn’t find this too much of a problem – and in fact, I had one of the most quiet night’s sleep of my life!

Every room in the hotel is decorated differently and furnished with very cool Philippe Starck furniture. It just so happened that my particular room had exactly the same wallpaper as I have in my bedroom at home, which was a slightly weird coincidence! A nice touch in the room was that the wall that separated bedroom from bathroom was entirely made of glass. This meant that light from both windows, one at either end of the room, could fill the whole space making it feel more spacious. Had the wall been solid, the room would have felt much smaller and darker. Very nice, well thought-out touch. It is, from my experience, quite rare to get a light and airy bathroom in Paris that has it’s own window! On the ground floor, there’s a lounge area that has also been nicely thought out. Le Placide isn’t the place to go if you want a lively bar and restaurant in your hotel – it has neither – but you can have a drink here and order food from a small selection on the room service menu, which is available 24 hours. Le Placide has done well with its limited space to make the downstairs area feel homely and welcoming and in the morning it was transformed into a lovely breakfast room with gorgeous pastries and fruits stacked up on little plates in the window.

I refuse to pay for hotel breakfasts in Paris, they are always very expensive and very rarely included in the room rate and I like to go and explore Cafés and Patisseries instead. Which probably works out to the same price (be warned! My hot chocolate was €8 at a well-known nearby café!) but I like to get out into the fresh air and incorporate a bit of exercise! Talking of exercise, the hotel has a Solex bike (electrically-assisted) that you can borrow should you have an urge to re-enact scenes from Amélie!

The St Germain area is quite bohemian – take a stroll along the main Boulevard St Germain and you’ll see dozens of famous cafés that were once haunts for the literary-minded. Café Flore, place of the ridiculously-priced Chocolat Chaud, has a great little conservatory out front where you can sit and people-watch, and Les Deux Magots next-door is equally charming. 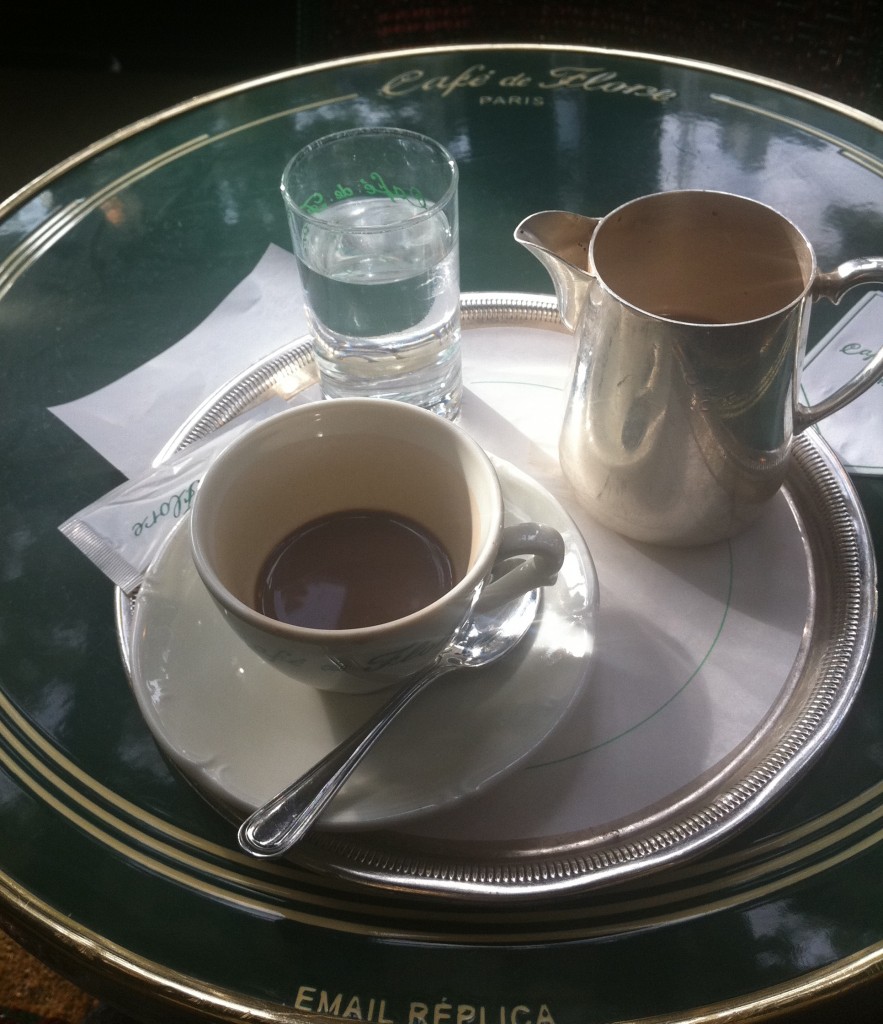 The staff at Le Placide were charming at all times, the night-time concierge booked a table for me at a nearby restaurant and didn’t grumble or roll his eyes when I wanted to change my reservation time. Twice. For dinner I went to l’Epi Dupin, which was literally on the very next street. L’Epi Dupin has received great reviews and appears in a number of well-respected guides and so I couldn’t quite believe my luck when it happened to be so close! 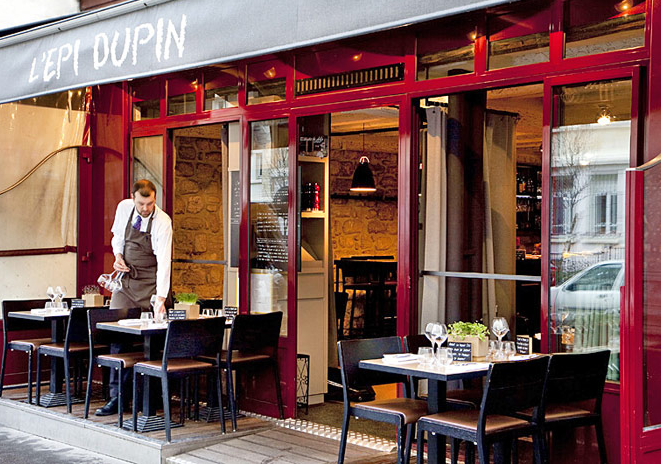 The evening menu is €33 for three courses, which isn’t a ridiculous amount, and the food is indeed excellent. The house wine is well-priced and very good, and I came away having spent under €50 including tip. I ate an amazing confit of duck, and some very fine roasted figs with homemade ice-cream. My only criticism was that I felt very rushed; my starter came within 10 minutes of my sitting down and my main course arrived the moment that I placed down my knife and fork on my empty starter plate. Perhaps it was because I was dining alone and they thought that I might like to get out of there as fast as possible; but I don’t see why they would have thought that – I gave every indication that I was happy to sit and read and soak up the atmosphere! Anyway, just to annoy them, as is my way, I ordered a couple of extra glasses of wine and sipped them slowly. Ha!

Back at the hotel, I ran myself a bath and read my Paris Top 10 Guidebook, trying to work out a route to Versailles the next day, where I was visiting the Spa Caudalie at Les Etangs de Corot. The hotel was quiet, I couldn’t hear any traffic noise from the street and no slamming of doors or noisy guests. Which is always my biggest fear in a hotel – if it’s noisy, I simply can’t relax!

Overall, I found Le Placide to be utterly charming. I nearly had a heart-attack though when I opened the wardrobe and saw a little card on top of the minibar with the ‘rack rate’ for the suite printed upon it – €390! Now I know that hotels in Paris are notoriously expensive, and this room was a cut above most in terms of size, but €390 is a colossal amount! Luckily, the ‘rack rate’ is just the maximum price that a room would fetch, and in these days of hotel booking sites it would be very rare that you would ever pay that rate.

The rate for my Junior Suite started at around the €200 mark on Mr and Mrs Smith (my beloved boutique and luxury hotel site that I spend my life perusing) which is actually incredibly good value for a luxury hotel room of this size in Paris. I have paid €150 for an absolutely dire room in an awful area before now, so if you can grab a room at Le Placide for under €250 then you’re laughing!

It’s easy to reach Le Placide from Gard du Nord (where the Eurostar terminates) – just hop on the Metro Line 4 (dark purple line on the plan) and take it all the way down to St-Placide. The journey will cost you €1.70 and it’s a very short walk to Le Placide once you get above ground. You can hop in a taxi, but the queues at Gard du Nord are infamously long, and I promise you that the Metro is quicker. And a fraction of the price. Take it from someone who knows! 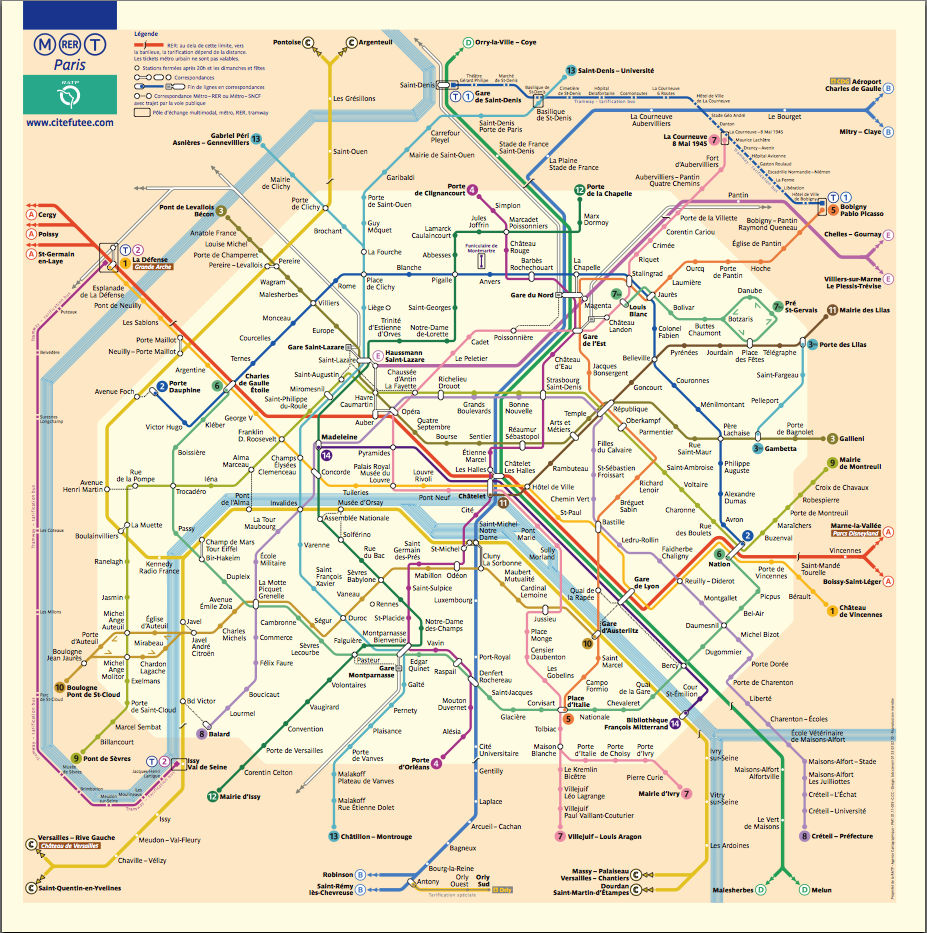 Le Placide can be booked online; if you haven’t yet succumbed to the joys of Mr and Mrs Smith’s website here, then you don’t know what you’re missing! For a little video of Room 21 at the hotel, click here.