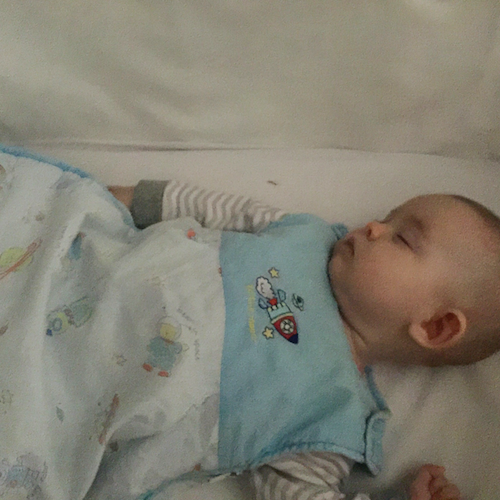 (Just in case some of you think my grammar has gone down the pan, I Can’t Get No Sleep is a reference to the well-known Faithless track “Insomnia”. Though I don’t have insomnia, not by any stretch of the imagination: in fact it would almost be quite helpful if I did have insomnia, mildly, because at least I wouldn’t have the fear of falling asleep on my feeding baby at 2am and smothering her with my ginormous breasts!)

We seem to be in the midst of what I can only call Sleep Deprivation Hell. Angelica refuses to sleep during the day unless she’s taken out in the car or in the pram, and at night she’s waking every one-and-a-half to two hours. The only thing that will comfort her is a feed. I’m bloody knackered – I’m like a shell of my former self!

The thing is that since the first couple of (balmy, time-laden!) months, Angelica has never really slept through the night. After the Health Visitors scared the life out of me about letting her sleep for more than four hours, and I started waking her up (I KNOW! WHAT THE HELL!) for feeds, she’s never really gone back to her contented sleep-animal self. But a couple of weeks ago I noticed a distinct change in that she was getting more easily disturbed and more difficult to put down for a sleep in general. I went to get her weighed to make sure that she was OK in that respect and she was perfectly fine, but the Health Visitor did say that maybe I could start weaning, maybe with a bit of baby rice, just to see if she took to it. I was kind of at the end of my tether with tiredness and had gone in to ask whether maybe feeding some formula before bed would help her sleep through, but she suggested carrying on with the breastfeeding (easy for her to say! I thought) and trying to introduce some of the early weaning foods. Pulverised butternut squash, pear, etc.

But I’m such a chicken! I don’t know why I’m so reluctant to feed her these things – it just seems weird after her only having breastmilk for almost six months to give her these alien textures and colours. And partly (I’ll have to hide after saying this and perhaps not read the comments for a while!) it’s a weird, emotional thing, because I can’t bear the thought of someone else feeding her. In my head, this sad music starts to play (we’ve never spoken about my penchant for turning all life events into scenes from sad movies, complete with soundtrack, in my imagination, but that is what I do) and (in black and white, grainy film, obviously) I sit on a wall in the rain, sobbing she doesn’t need me any more!

But we have tried some baby rice, mixed with expressed breastmilk, and she absolutely LOVED it. Gobbled down a whole load. (I didn’t feed her, her Dad did. And a very good job he did too! Plane noises and everything. I was very impressed.) But she didn’t sleep better, or longer – in fact if I remember rightly she had some crazy energy spurt and went mad in her Jumperoo! (Have we discussed the Jumperoo yet? So much to catch up on!)

Now I’m sitting down in the evening to write this and I managed to get Angelica off to sleep (after feeding at both breasts for about seventeen years) at half past nine. That is really good going. Let’s see how long she sleeps for – maybe I’ll keep a diary! That’ll be interesting for you. (Note sarcastic tone.) My husband keeps on saying that I should “sleep when she does” but I think that what people don’t realise, when they’re not tied to a baby for all of their waking hours, is that sometimes you just need a few hours to yourself to do stuff. Sit on the loo, maybe, and browse ASOS, or have a bath, or…work. (I get really panic-stricken if I can’t keep up with my workload, an issue I am really trying to work on because it makes me feel terribly guilty when I have a flash of resentment for not being able to “get stuff done” – I have to mentally reset myself and remember to enjoy every single second of our time together, because she is growing up so fast already. So I do end up simply doing all of the work that I’d normally do in the daytime, but after she’s gone to sleep. Cue midnight, 1am bedtimes with video edits still scrolling behind my closed eyelids when I hit the pillow…)

I was reading on Google (never a good idea) about the “four month sleep regression” and then found stuff on a “five month sleep regression” and also stuff for six, seven, eight, nine months, and after reading hours worth of advice and opinions and information I had a bit of an epiphany. Isn’t this exactly what every single parent goes on about? The whole sleepless nights thing doesn’t come up time and time again for no reason, does it? It’s easy to feel alone, when you’re a new Mum, or a first time Mum, or even (I’m sure) an experienced Mum, and to think that you’re the only one experiencing certain things, when in fact nearly everyone is going through it. And surely that makes it normal? Isn’t a degree of sleep deprivation completely and utterly normal? I know that lots of people have great babies who sleep like logs from eight weeks and never have any trouble, but isn’t it very very common for babies to wake up? Am I kind of wasting my time trying to figure out why she isn’t sleeping through? Maybe she’s just hungry more often at the moment, or wants comforting more often? Is it the end of the world, really, to just go with the flow and accept that some babies wake up through the night? Perhaps I’m being soft – and I know that there are Mums who have got their routines well down to pat by this point (my sister, for one!) but it’s almost more tiring trying to double-guess what’s going on than just do what’s needed. I can imagine that this is the point when a lot of people who were previously plain-sailing through breastfeeding decide to supplement with formula or move onto formula altogether. I toy with the idea a few times a day, but as yet haven’t been out to acquire the necessary equipment!

Anyway, for now I’ve decided to (cheerily / through gritted teeth) embrace the night wakings and use them to write blog posts and search for mid century modern light fittings. The fact that I can’t actually keep my eyes open for some of them is by the by – Keep Calm and Battle On! I’m going to invest in some clamps to keep my lids open and some of those eye drops that you spray onto closed eyes and then they infiltrate your lids and moisturise your eyeballs. Or something.

Anyway, thank God that Angelica is absolutely beautiful and – sorry to be soppy – a complete and utter ray of sunshine. The joyfulness of the days manages to almost completely anaesthetise me against the painful exhaustion of the nights. Now it all becomes clear to me: that’s why they made babies so cute.