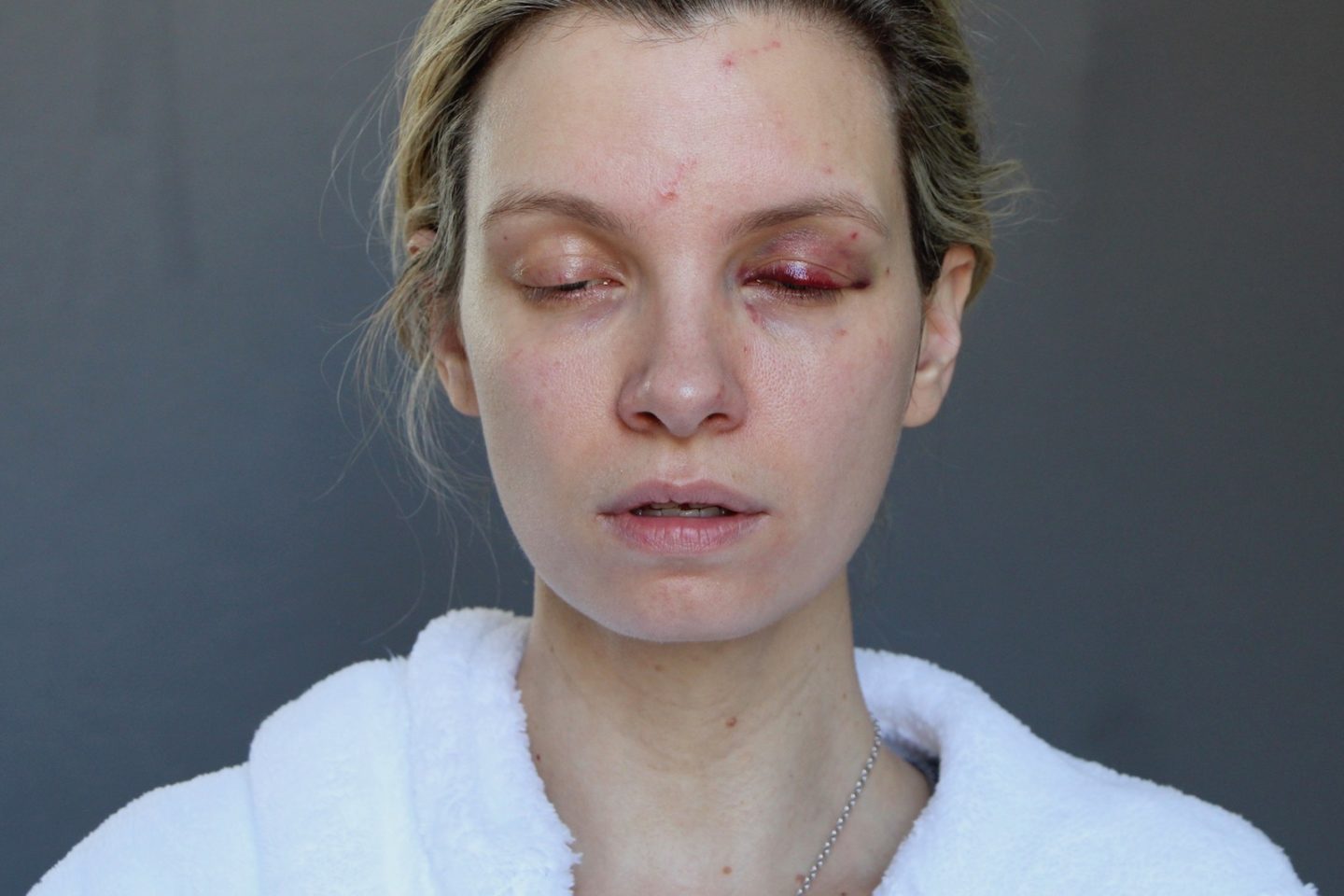 I can now add “tree wrestling” to my list of stupid things I do when I’m pre-menstrual. Honestly, it has been a three day marathon of idiotic decisions, irrational reactions and unprovoked breakdowns. Although the tree wrestling episode was pretty bad and saw me screaming, clutching my face and retching into the shrubbery all at the same time…

All I wanted to do was take the ivy off the beech trees. The fact that the beech trees are about the same height and circumference as NASA space shuttles did not deter me – nor the fact that we have lots of them. I’m going to save those trees, I thought to myself, if there’s one thing I achieve this Saturday it’s going to be ridding the trees of their strangling, life-sapping ivy garlands! I’d been meaning to de-ivy the trees for a while, so I donned some gloves (must protect my hands, don’t worry about face) and got to work, ripping the ivy off, pulling down vines that were sometimes ten metres long or more, ripping up the roots and chucking it all in the wheelbarrow.

Because the children got bored of playing on the grass after approximately three and a half minutes, and then started disappearing to other parts of the garden where I couldn’t quite see what they were up to, I sat them in some chairs and gave them my iPhone to play with. And then, unencumbered by responsibility, I really got going with my gardening.

There was one particular tree that was being absolutely plagued with ivy; it had grown for so long that the stem was about the same diameter as a small rolling pin and it curled and curled solidly around the beech tree in an impenetrable coil. Rather than finding a saw, or something sensible, I decided to break the ivy at its source which was a sort of small tree coming out of the ground. Around six or seven of the massive, thick ivy stems had been sawn off and then there was the one death-bringer that snaked its way to the beech.

I know, I thought, mainly because I couldn’t be bothered to go and ask Mr AMR for a saw, what I’ll do is I’ll bend the ivy tree thing right to the ground and jump on it until it snaps. Then I’ll pull it out of the earth with all of its roots (probably about ninety miles’ worth, but I didn’t consider that at the time) and the job will be a good ‘un!

Oh God, if I had been on camera. I’m sure the film would have won prizes. I stood on the tree, bent it to the ground so that it was stressed to its absolute limits. This bloody ivy was desperate to get up – it was the wrestler who refused to tap out, he had so much determination to live that I could virtually feel the energy through the soles of my boots. I gave a little jump, thought I heard the stem break. I jumped a bit more. And then, I have no idea whether I jumped again because something hit me in the face that knocked me off my feet. Something jagged, many-pronged, something very hard and angry.

I can tell you that being hit in the face with a tree at approximately five hundred miles per hour is not fun. I actually thought, for a minute or so, that I was blind. Then I thought my nose was broken. In reality I didn’t know what the state of my face was, because I was just clutching it and making a weird keening sound and we don’t have a mirror in the garden, but I was guessing the worst.

So whilst Ted and Angelica continued to play on the iPhone, not even batting an eyelid that their mother was rolling in agony not five metres from where they sat, I hunched over that bloody mini ivy tree, screaming for Mr AMR (who was trimming the hedge far, far away) and trying to not faint from shock.

Honestly, the emergency instincts of the dog and children were dire; the dog just came and sniffed around for a bit, the kids did nothing. They’re tiny so I suppose they can be forgiven – also they were colouring in a giraffe on their colouring app, and that’s not something to be interrupted, but the dog? I always thought that dogs were supposed to turn all Lassie on you in moments of dire need. Summon help with a strange, siren-like bark. Paw at the gate latch until it swings open, run to the nearest A&E (six thousand miles away) with a muddy, scribbled note. Fetch you a cold compress and pour you some brandy from their SOS bottle that they carry around their necks.

No such luck. Thankfully Mr AMR didn’t have his headphones on and heard a “weird sound that didn’t quite sound human”. He was very calm and made me press ice all over my face for about an hour, which I’m sure saved the whole thing from swelling up to gargantuan proportions. The damage is surprisingly inconsequential.

What a bloody palaver. I feel as though I’ve been whipped with a witch’s broom! A giant one! That’s the last time I do any extreme gardening. I knew it was a stupid thing to do the moment I started doing it, but when I have PMT it’s like I can’t resist testing my limits – or tempting fate. The same with using my curling irons the other day – I knew I’d burn myself without the heatproof glove on but I threw caution to the wind and curled my hair without it. Five burns. I am only this stupid for a few days of the month – the rest of the time I am a total health and safety maniac.