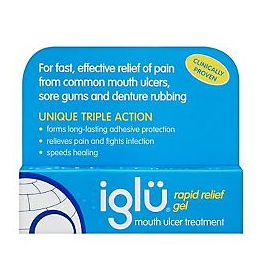 This has to be one of the most unglamorous posts in the history of my posts – a mouth ulcer gel. Well, sorry, but it’s necessary. I have to shout about this stuff, because it beats Bonjela a million times over in terms of pain relief and healing power.

I didn’t actually have a mouth ulcer – I had what can only be described as a ‘car crash of the gum’. My wisdom tooth on the bottom had decided to accelerate it’s growing-speed by about three thousand percent in one day, and it had basically destroyed the surrounding gum and the side of my mouth.

It was very painful and I couldn’t eat any solids, which forced me to adopt a a liquid diet. The liquid diet (Chardonnay with the occasional shot of Mother’s Ruin) did wonders for the pain, but then I realised that I had put on four pounds and lost six days.

So I searched high and low for an alternative to booze, and found it at the very tiny Boots in the village of Appleby in the Lake District. I’d like to give you an accurate transcript of the conversation, but to be perfectly honest, I couldn’t understand a word of what the woman was saying. But I asked for the ‘strongest mouth number known to man’, rather in the style of ‘Withnail and I’ and this is what the dear lady gave to me.

This stuff is great: I have no idea what it contains, just that it tastes disgusting. It forms a thick layer of gunk that even a sandblaster couldn’t remove, numbing the pain and helping to fight infection. It’s gross, but it works. So for all you ulcer/wisdom teeth/denture pain (!) sufferers out there, ‘iglu’ is your man.