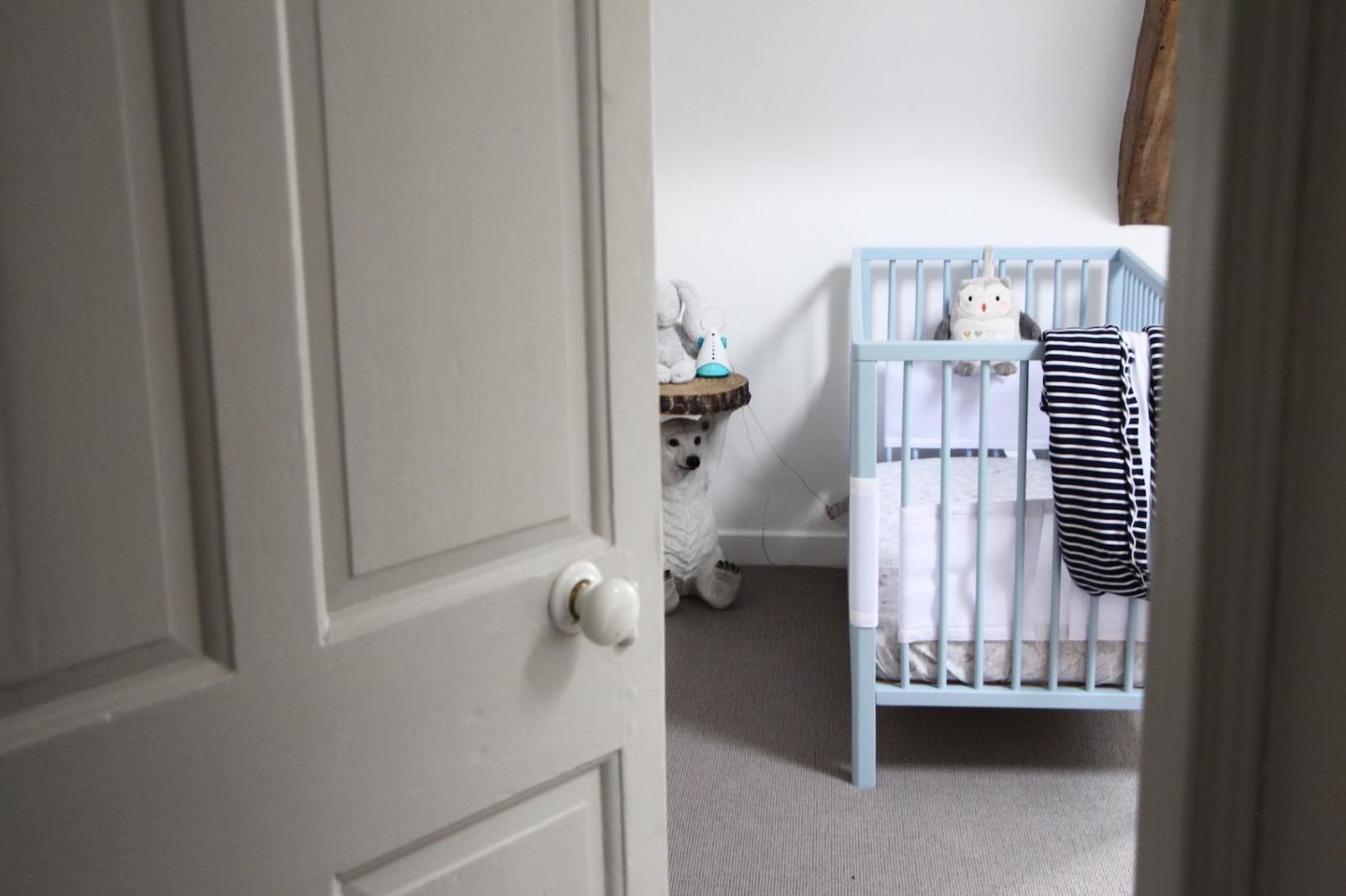 What with all of this sleep talk (Ted is sleeping through, just about – read the latest update here) I thought I’d touch upon some of the changes we made to Ted’s cot and nursery set-up. Because before we went in with stronger sleep tactics (change to routine, feeding, etc) we tried to eliminate anything on a more practical level that could have been keeping him awake.

Angelica’s sleep had been far easier to settle into a night-long stretch than Ted’s – you can read about what we did with her here – but we still had to tweak her routine a bit and try to feed her more in the day, as she too used to gobble down all of her calories during the night! But she slept through from 7-7 from about nine months, I think. Ted (almost one year old) has been harder to settle and has always required a bit more work even to get him to nap for short amounts of time. It was okay when I used to breastfeed him to sleep (oh, the days when he would just drop off in my arms and I’d slide him into the Snuzpod!) but that finished many, many moons ago now and for the past couple of months he’s cried at almost every nap or bed time. 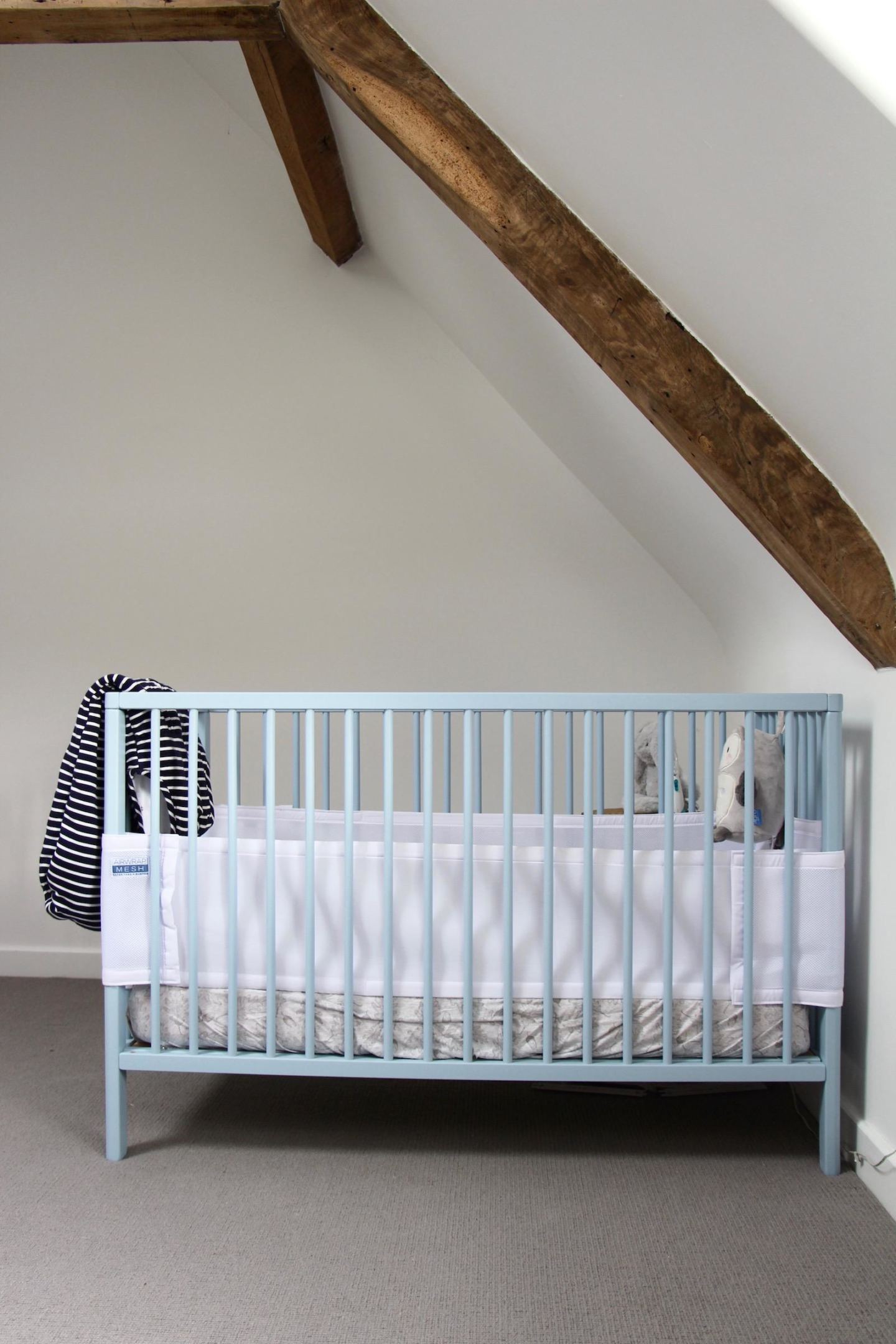 So, practical things we did to rule out any sort of external annoyances/discomforts:

We moved him to a warmer room. I mean, the room he was in was freezing. The new house is a Georgian, high-ceilinged house with all of the original windows, which look lovely but need draught-proofing –  Ted’s room had two huge sets of windows and so it was basically like being outside! Despite his many layers, we were still worried about the temperature and so we moved him to a room on the top floor, which for some insane reason is like a totally different house and about three degrees warmer than anywhere else.

We bought him a new cot. Not that there was actually anything wrong with the other cot, but it was an old one that my parents had lent us as a temporary fix, and it had a foamy, plastic-covered mattress that didn’t have much in the way of support. And I got sent a brilliant Eve mattress (yes, they do them in cot and cot-bed sizes!) but the cot was a weird size, something like 68cmx128cm and the Eve mattress didn’t fit. It was cheaper to buy a cot to fit the mattress (which is standard size) than try to get a mattress made for the cot. So I just picked up one of the no-frills wooden cots from Mothercare (it was seventy-something pounds, but I can’t find it online now, don’t know whether they discontinued it) as Angelica will soon be in a single bed and Ted will then have her cot, which turns into a cot-bed.

The Eve mattress is incredibly well-designed – you’ve probably seen the adult ones that come rolled up in a box when they’re delivered – and has pocket springs as well as a foam layer. It won an award in the Smallish Design Awards last year, which comes as no surprise as it’s pretty well thought-out. I particularly like the completely waterproof protective layer between the cover and the mattress itself – no unsightly stain marks from little accidents! You can read more about the Eve mattresses here. 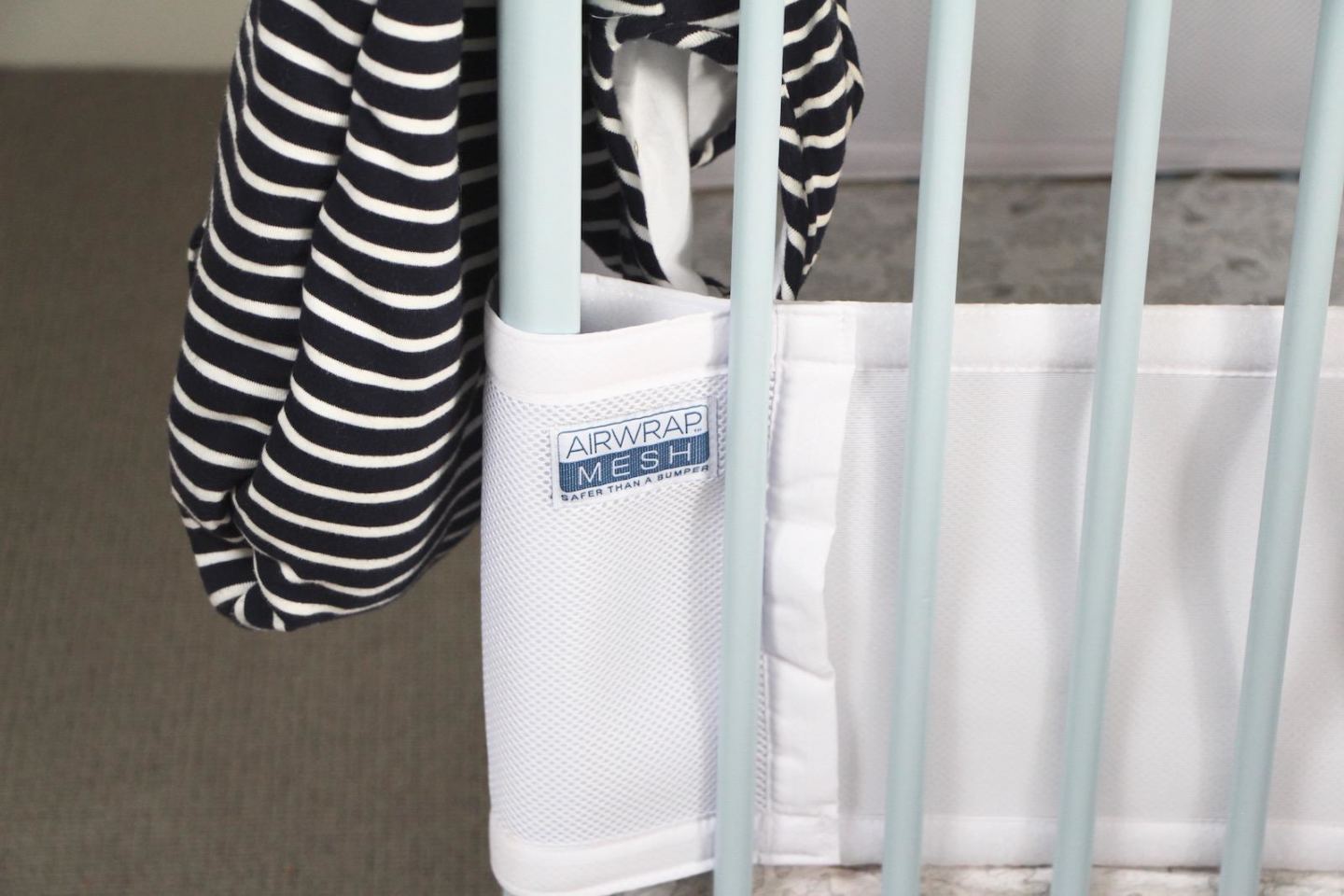 We added safe cot bumpers. Ted was always poking his arms through the bars in the cot and I’m sure he was getting them stuck and it was waking him up! But I was wary of getting bumpers as there were so many warnings against putting anything in or around the cot. I got sent a set of Airwrap mesh bumpers to try from JoJo Maman Bebe (£27 here) and they’re excellent – completely breathable, but still stop arms and legs from poking out of the gaps. The velcro fastenings are really secure (to the point where I can’t actually get them off!) and if a baby did press their face up against them, they allow maximum airflow. 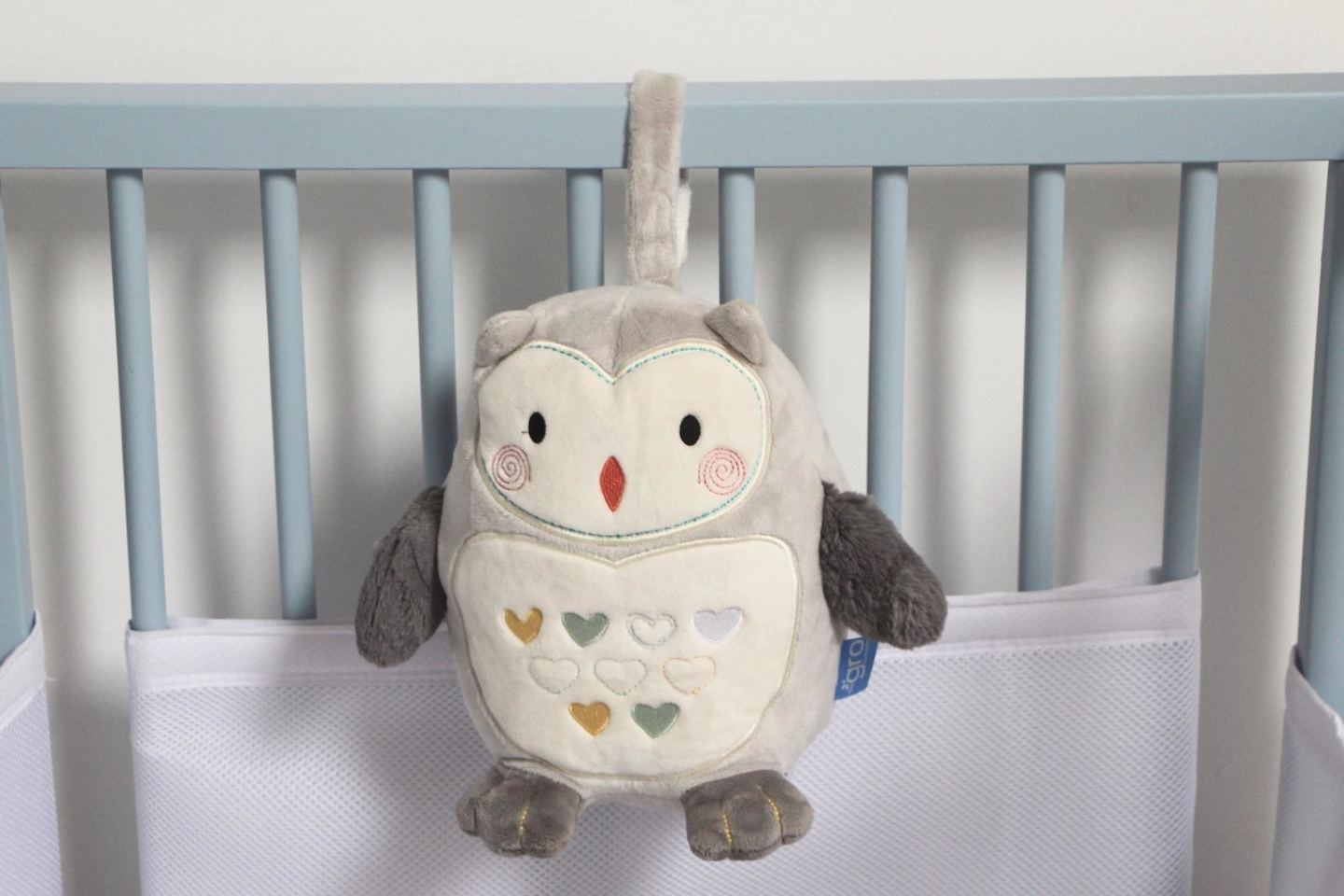 We installed a white noise machine. I say machine: that seems a cruel, heartless label for such a cute and cuddly owl. Angelica had the Whisbear, which is brilliant, but we’ve lost the noise-maker from inside it (we were using it in the car when Ted was newborn) and so I ordered Ollie the Owl from Gro at Amazon (£34.99 here*). If I had to do an Owl vs Whisbear fight, then the Whisbear would win on simplicity and also the fact that the bear is nice for them to cuddle and has weird magnetic legs that easily clamp on the side of the cot, but the owl would win on functionality. For a start, it has four white noises – or three and a lullaby tune – rather than the Whisbear’s one, and also a little glowing tummy. Two of the noises – lullaby and sshhh – are cry-activated, like the Whisbear’s. So once they’ve done their time (20 minutes), they turn off but restart if the baby cries. The owl from Gro is far easier to use in terms of the cry activation, I think, because you just have to turn on one of the options by clicking the left hand wing. I’m sure the Whisbear had an easy way of doing it, but I lost the instructions and could never bloody remember! Anyway, both are wonderful – you can read my Whisbear review here, or it’s £42.99 here*. 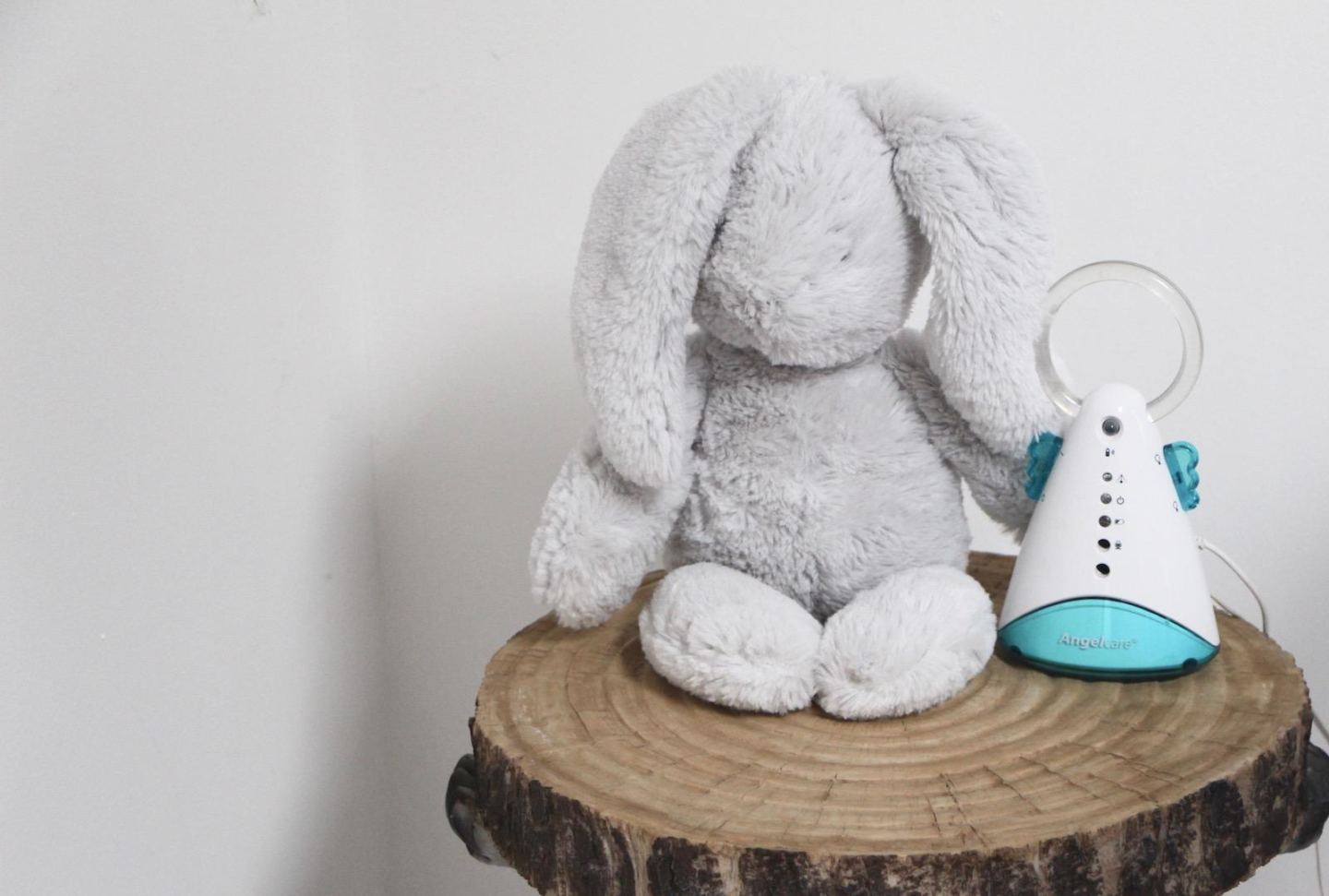 We still use the same monitor for Ted – the old Angelcare one that my sister gave to me when I first had Angelica. It’s such a workhorse, it’s like the equivalent of a Nokia phone from the late nineties! The battery lasts an age, I’ve dropped the handset down the stairs about six times and it’s still going strong. It has a motion pad as well as room temperature display (obsessed with that, obviously) and the signal remains strong for quite a distance. The only thing it doesn’t have is video, which I’d quite like now that Ted is a bit further away, so I’m deliberating over whether to get a second mortgage and upgrade to this one*. Whew, pricey!

Joking aside, I would absolutely recommend the Angelcare monitors if you’re looking for one – the version we have now is here* and costs £70. It’s not the most elegant, but – as I said – it’s a workhorse, reliable and does the job.