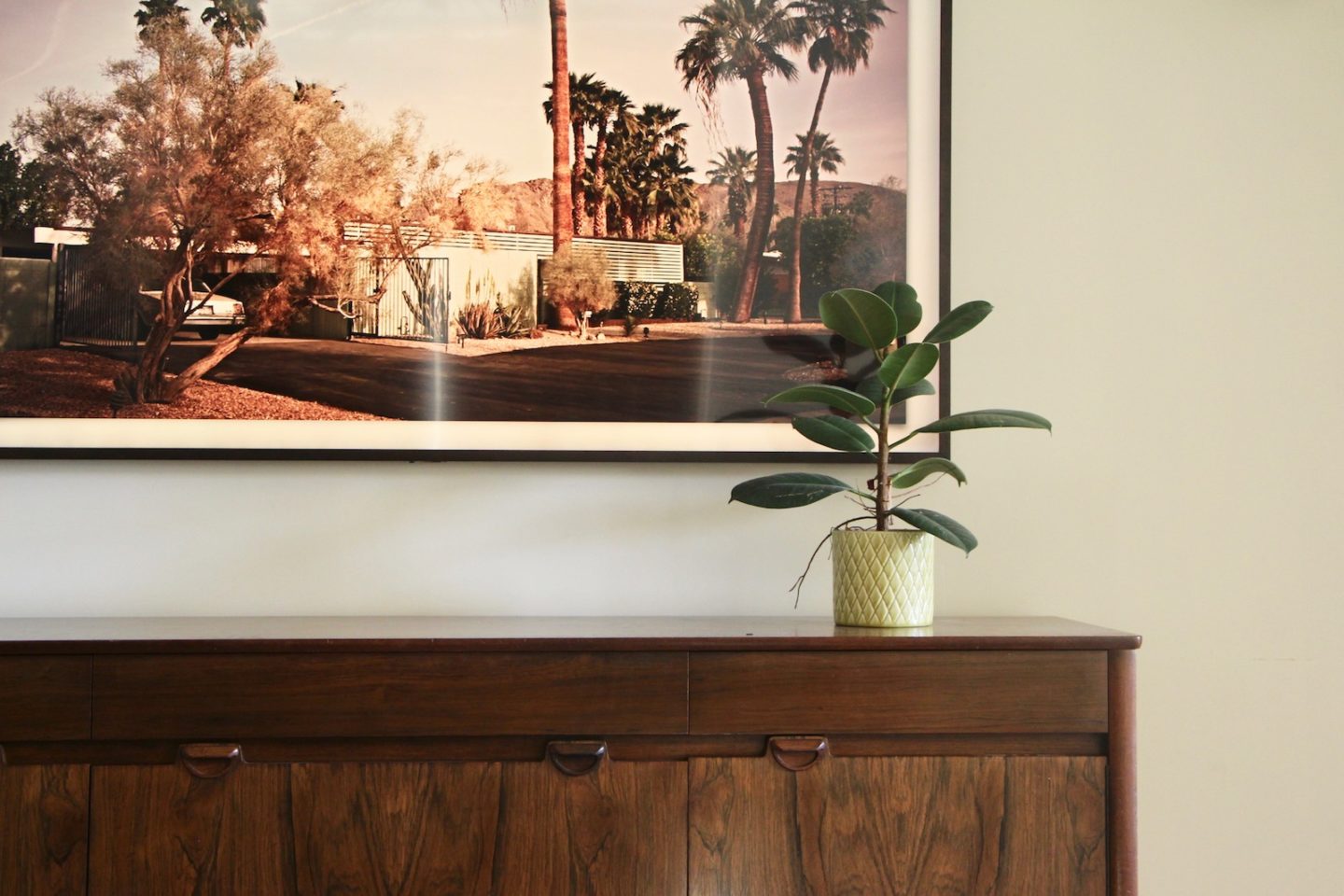 Bane of my house-decorating life, televisions. I like to watch them (my evenings are dominated by Netflix box-sets) but I hate the look of them. I hate them on their stupid perspex stands, I hate them when they are plonked in the middle of an otherwise bare wall, even worse with the wires hanging down. I hate the greyish, shiny screen when they’re switched off, I hate their chrome edges, I hate them on brackets and I hate them above fireplaces.

I realise that this will have covered just about every single television in the UK, including those belonging to virtually all of my family and friends, so apologies for that, I’ll show myself out. But they’re just so at-odds with virtually any decor you can think of, unless you’ve styled your home to look like the inside of NASA’s mission control room or you have a throwback 1990s living room complete with MFI black ash woodwork and matching leather La-Z-Boys.

(I’m absolutely not judging if you have any of these things by the way; this is my very own – possibly unique – hang-up and even Mr AMR thinks I’m bonkers. Also, the nineties thing is surely due a revival – maybe MFI will enjoy a resurgence!)

I suppose that TVs have become more streamlined – more refined – in this modern age, but in some ways I preferred the wooden cabinetted televisions of my childhood. At least they were unapologetically part of the furniture. I don’t think we ever had a new TV when we were growing up, but we inherited some wooden ones, usually with a matchstick sticking out of one of the tuning holes because the knobs had snapped off. Oh, the days when you used to have to tune in the channels with the twiddly things! When you had to adjust the aerial at the back of the set but the TV was so bulky there was no way to hold the aerial around the back and see if the picture was clear from the front, so it was a two man job!

(Or, as it happened in our house, a one man and three child job, because my Dad used to stand behind the telly holding the wire coat-hanger aerial bellowing at us, asking for a live update on what were absolutely miniscule changes to the picture quality. And almost blowing his top when we, the children, aged 7, 6 and 2, dithered.

“CAN YOU SEE THE TANKS ON THE BEACH?”

“IT’S THE D DAY LANDING, THE FOG IS PART OF THE BLOODY PICTURE!”

But back to the present day, and the fact that televisions – even the supersonic wafer-thin ones – tend to look like big black holes of doom almost wherever you try to put them, ruining all of your interior decorating plans. If you, too, hate televisions then I am here to help – my near-obsessive dislike of the things has resulted in several thousand hours of research into methods of hiding them or distracting attention away. Best ideas – tried and tested – below. 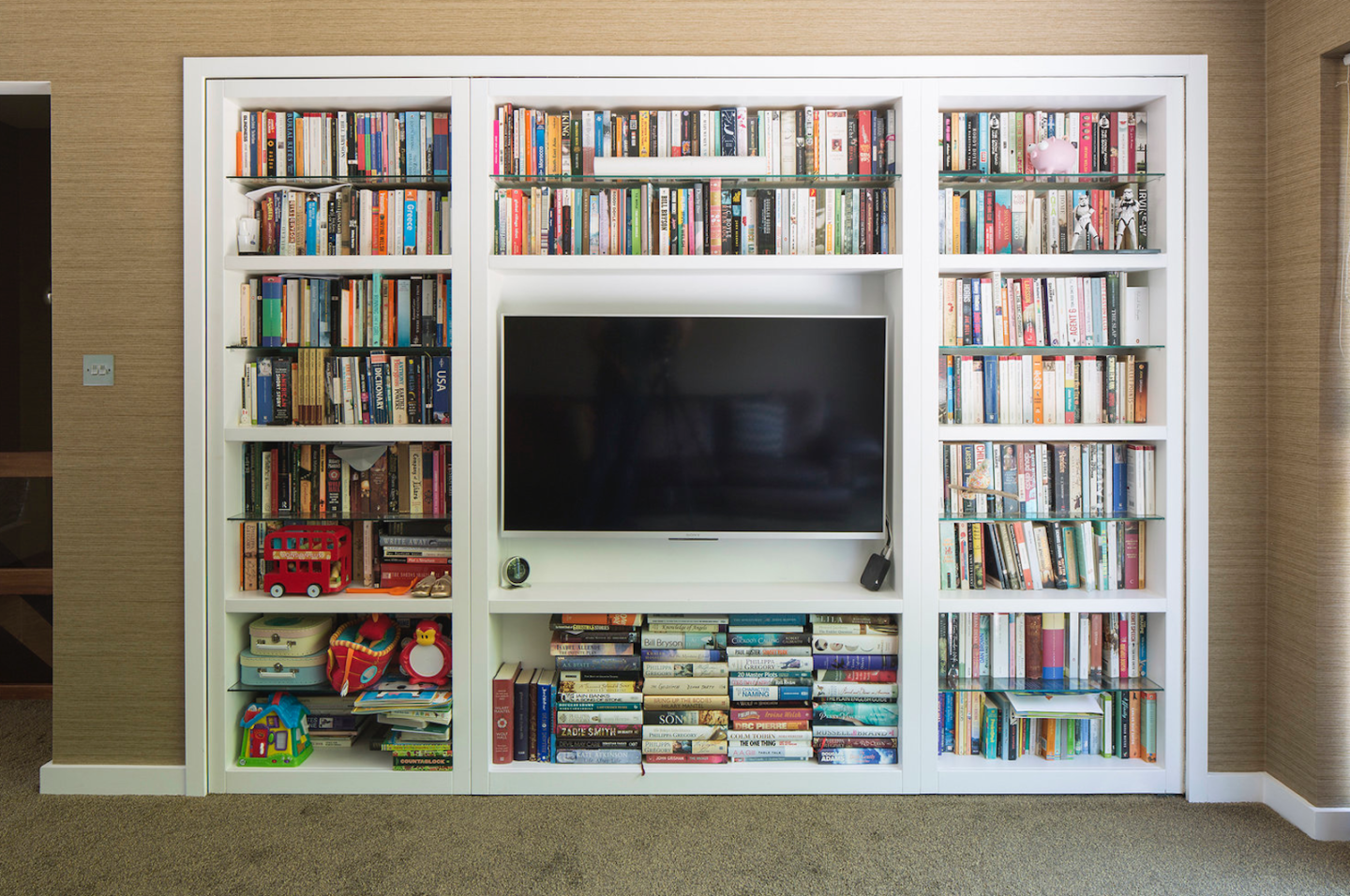 Build the telly into something busy. Taking attention away from the television by building it into something very busy and full is, I suppose, a way of almost camouflaging it. My distraction/hiding preference is a huge bookshelf – surrounding the telly with books and making it all very graphic and linear so that the TV looks as though it’s supposed to be there. We did this in our previous house and I loved it, though we did have a particularly special feature in our bookshelf… A secret door! 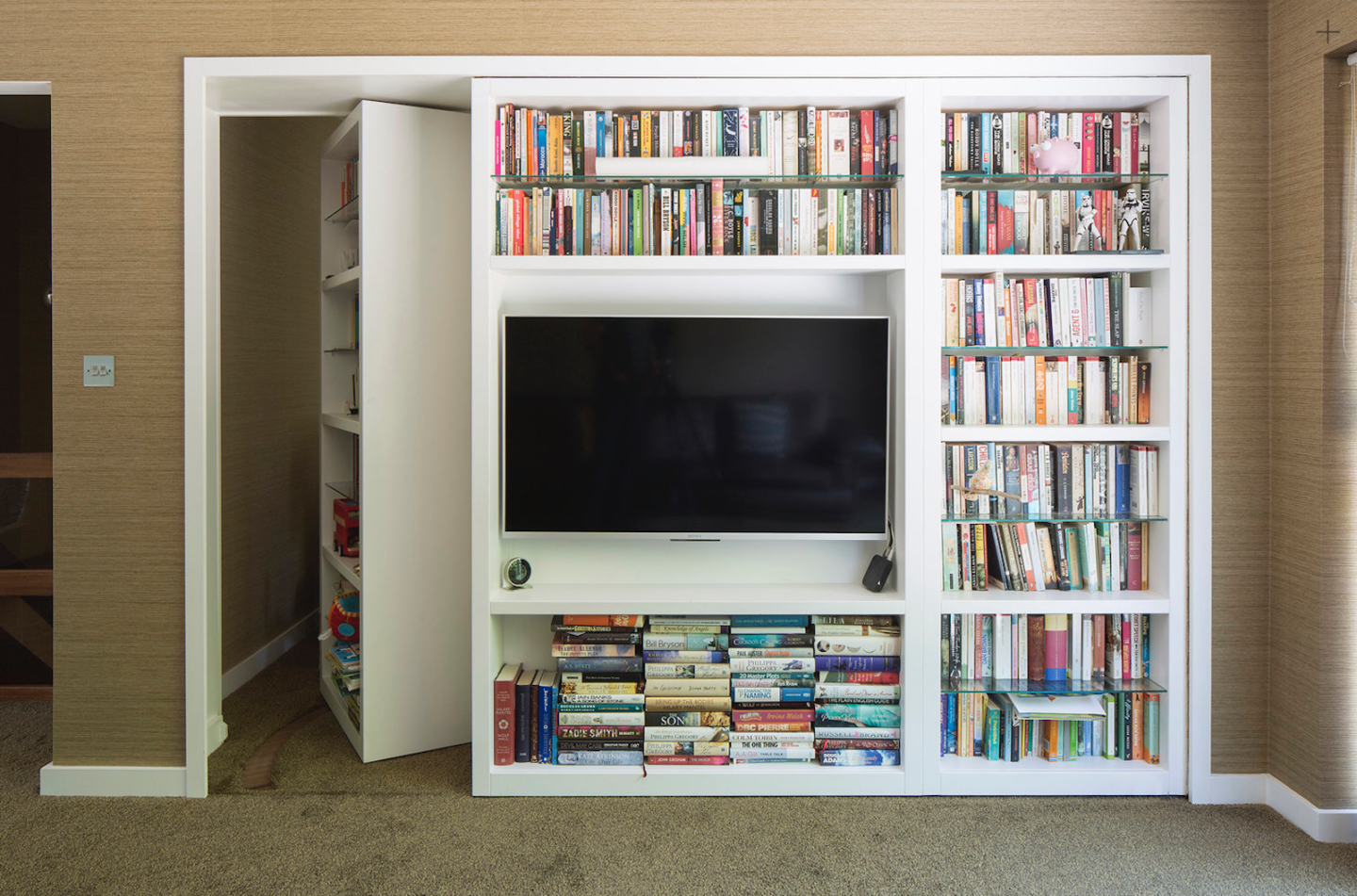 The layout of our old house before we renovated it meant that all of the bedrooms came off the main living spaces and the most annoying element was the door to the master bedroom, which was smack bang in the middle of the living room. It really made the living room feel like a sort of large passageway between places, rather than a cosy, relaxed space, so we wanted a way of hiding the door completely. We reconfigured the whole of the upstairs so that the master bedroom was in the old kitchen, and what was the master bedroom then became Mr AMR’s “office” (ie, he stored his computer hard-drives in there and sometimes watched golf).

So, to cut a ridiculously long story short, we had a secret door built into the bookshelves. It was identical to the column of shelving at the other end of the wall apart from the fact it was on the world’s heftiest hinges and moved across the floor on little wheels. Very James Bond and you would never have known that it was there at all until you pushed on it and it moved back to reveal the room behind it.

But I digress, because this is about television screens; I feel that having floor-to-ceiling books around the television made it sort of fade into the background. The rest of the wall was so busy that the (slightly recessed) telly screen looked almost neat in comparison. Distraction is a great thing.

Bespoke shelving isn’t the cheapest option (especially if you have a secret door engineered into it) but if you don’t need an entrance to Narnia/James Bond escape route then you can actually get quite a good thing going using the Billy bookshelves from IKEA. This is what I did to hide my big iMac computer screen in our first house, many years ago – I had the dark wood bookcases, which actually looked quite swish, and painstakingly configured the shelves so that my books were tightly packed in around a central opening for the screen. Masses of book storage, computer monitor partially magicked away. A great solution, I think, if you hate the look of a screen on your wall or don’t want it freestanding on a desk. 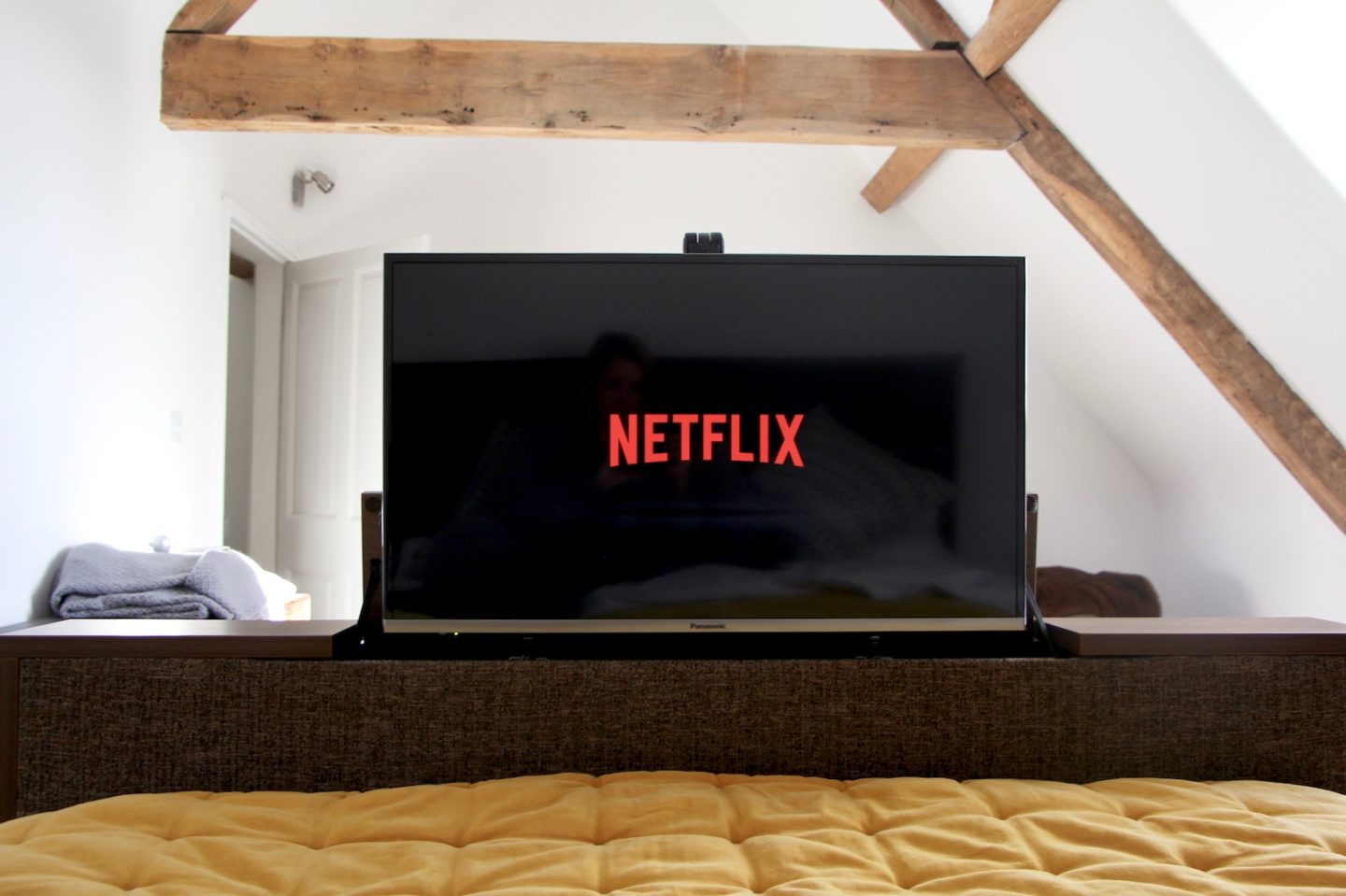 Hide your TV inside a bed. We went for the “telly bed” solution in our old master bedroom and it was all Sam from Pixiwoos’ fault. She bought a telly bed, we saw how good it was and then it became the only solution for hiding the bedroom television. We actually didn’t have space for one otherwise, because the wall opposite the bed was made entirely from glass (aka, a window) and to the side of the bed there were wardrobes (right hand side) and – usually, because I seemed to be constantly with a newborn in that house – a baby cot (left hand side). We didn’t like a lot of the telly bed styles, because our whole house was very mid century-vibed and most beds were more traditional, but we found a very simple, angular one at a place called – oddly enough – Telly Beds and they had loads of upholstery options.

If you’ve never seen a telly bed, the tv and accompanying mechanics are stowed in the foot and then you use a remote control to power it up and raise it into the air on a support. I mean, it’s faintly ridiculous and I do laugh at the (weirdly archaic) grinding and groaning as the screen makes its way out of the depths, like an explorer being winched out from a dark mountain crevasse, but it’s incredibly handy if you don’t have any other space to put your sex-life-ruiner.

Here’s the bed seen from the end – it’s up in “Granny and Grandad’s” room, which is quite sparse at the moment: 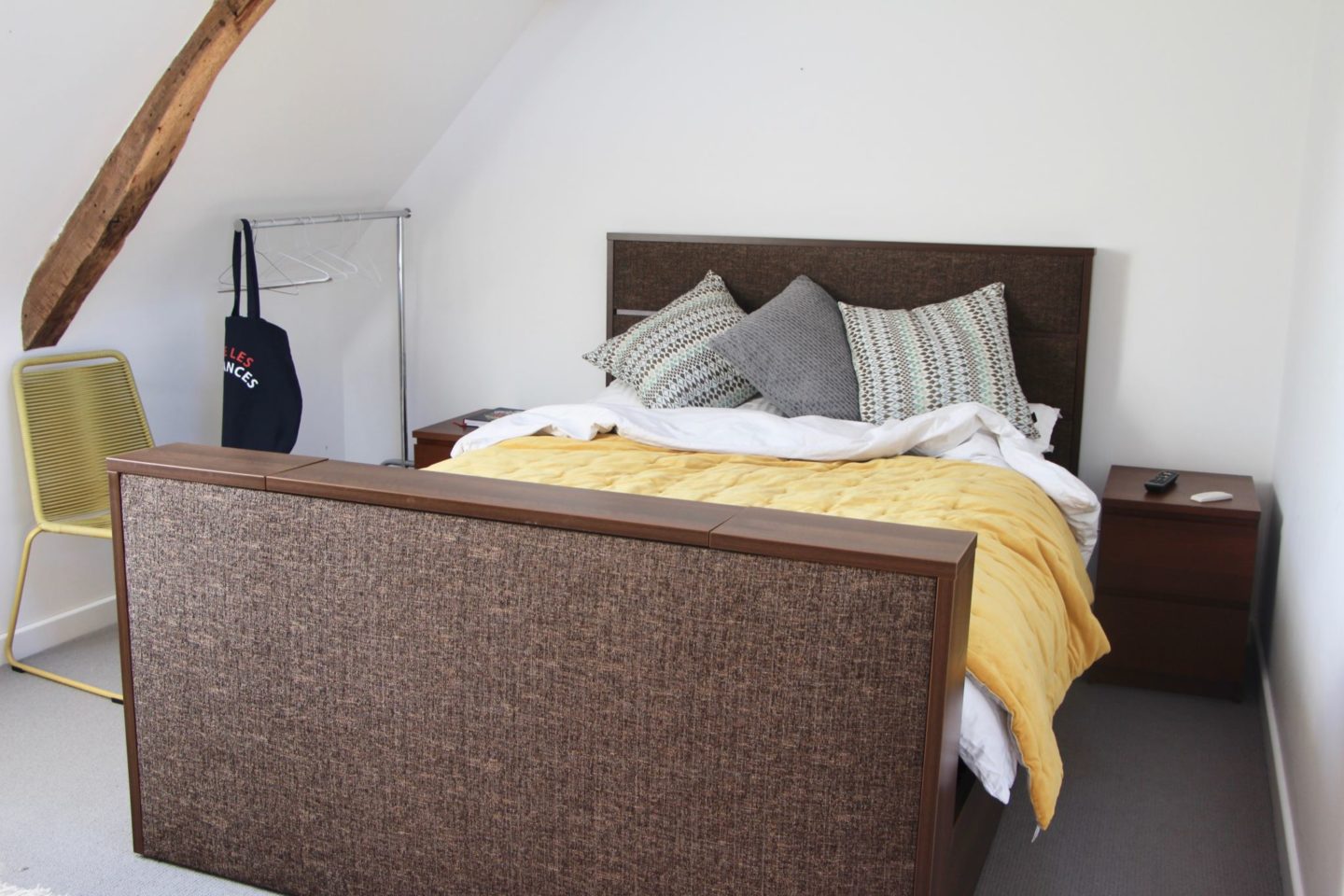 and here it is seen from the pillow end, with the television raised. And yes I do rewatch Peaky Blinders when I’m alone. What of it. 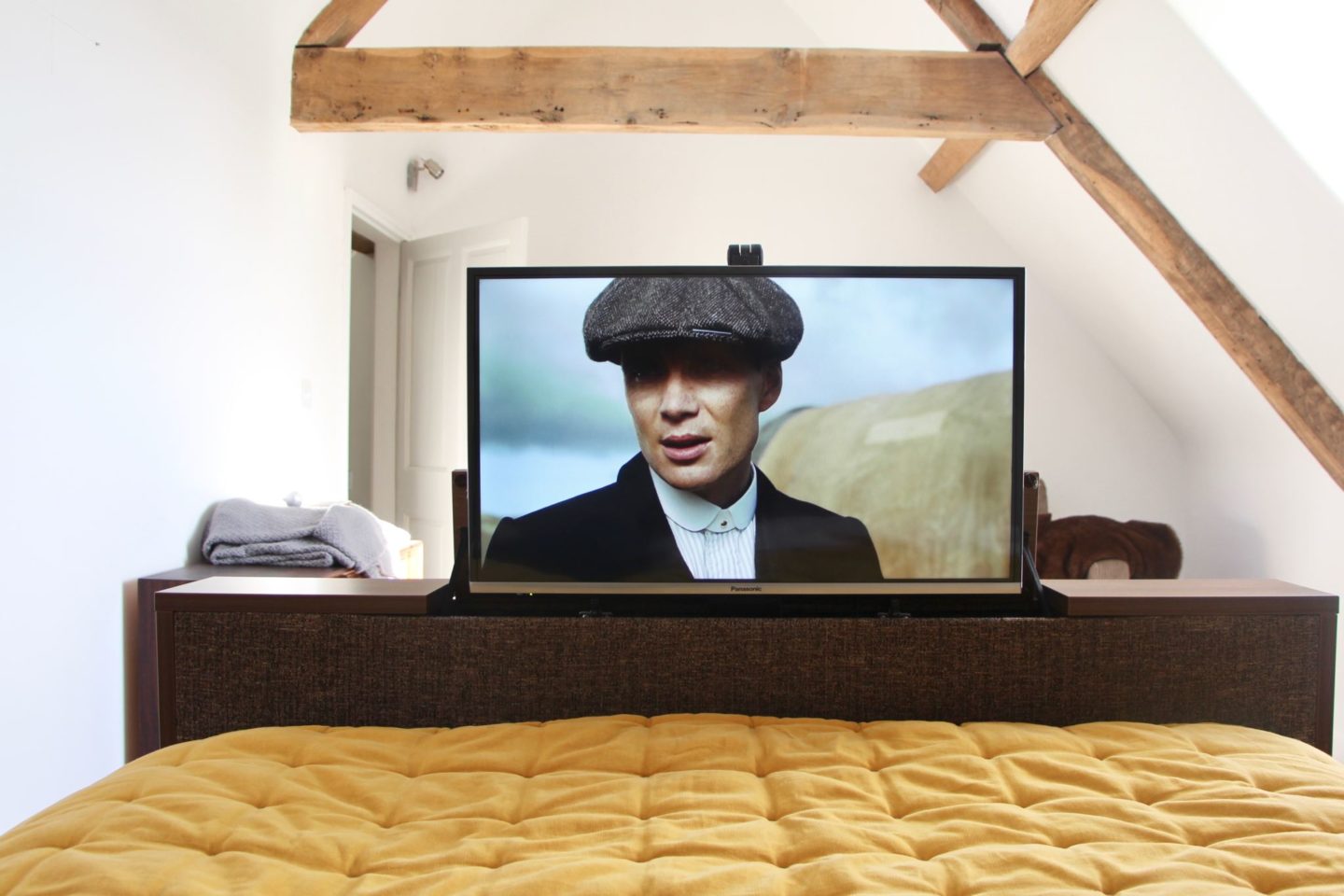 Other bedroom options are: to not have one (our current situation), the “TV mirror”, where the TV is inside – yes, you guessed it! – a mirror, and also closeting the telly away inside the wardrobe. For me, because I’m such a pernickety tit, the mirror one is a no-go. I’ve seen it done in many hotels that I’ve stayed in and it always just looks the wrong kind of shape to be a mirror. I’d rather just know it’s a telly, rather than looking at a mirror that seems to be positioned in a really weird place and is a shape that no other mirror on earth actually is. But brace for the ultimate answer:

The Frame TV. This, my friends, appears to be the solution to all of my television-hiding woes. A TV that is framed by a very convincing wood-like bezel, elegant and narrow just as a picture frame would be, and that displays artwork of your choice when the television isn’t in use. 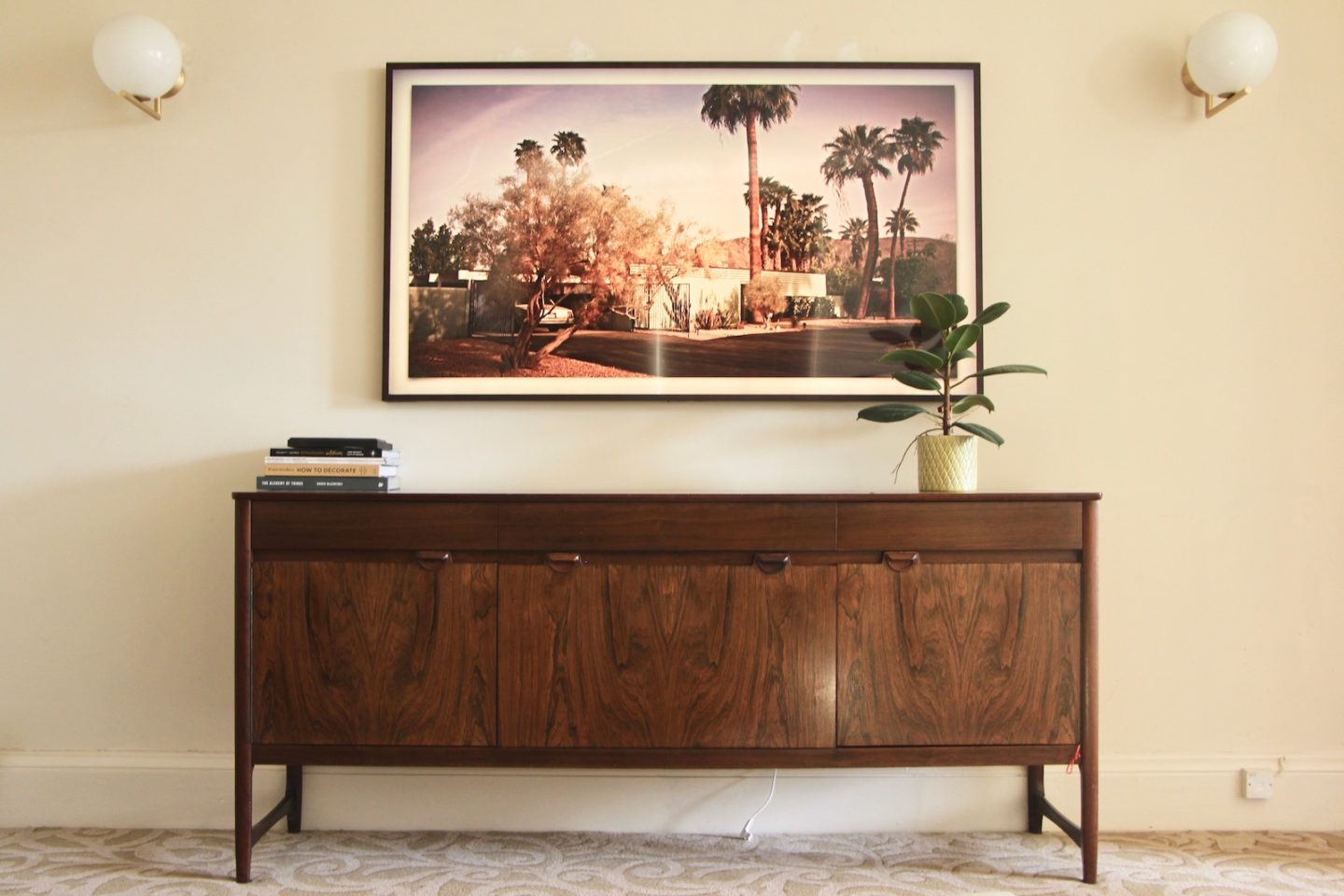 So it looks just like a painting or a photo in a gallery (excuse the bad paintwork, wires, weird curve that my camera lens has put on everything in the picture above) but is, in fact, a humungous, fully-functioning telly. 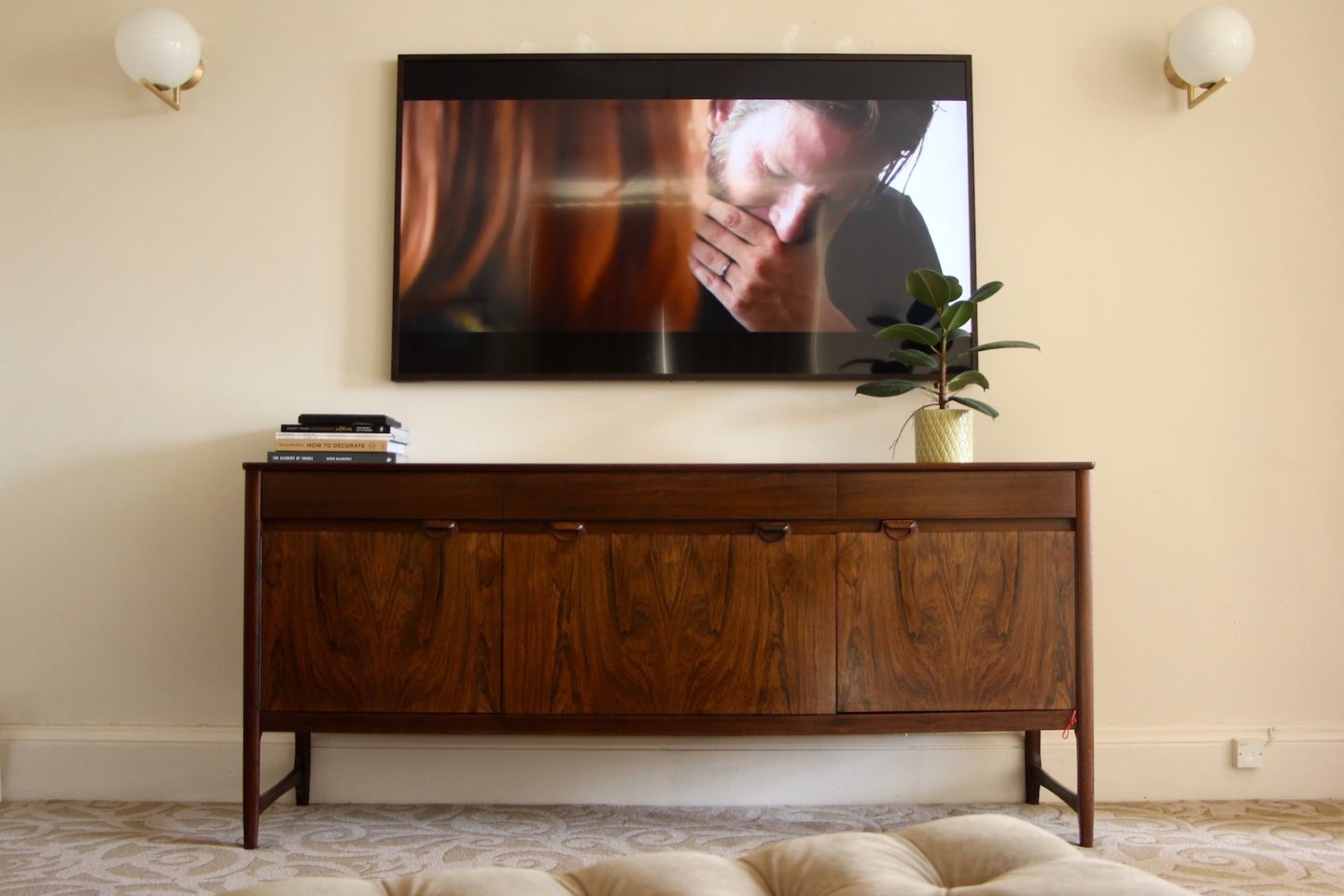 How absolutely genius is that? The Samsung Frame Art Mode TV can be hung absolutely flush with the wall because the mount for it is recessed right into the back of the screen, and you can get different frames that magnetically fix on to the unit. The wooden frames look best, as far as I can see – it’s rare you’d see an actual television with a wood frame, these days, so it just adds to the realistic effect. 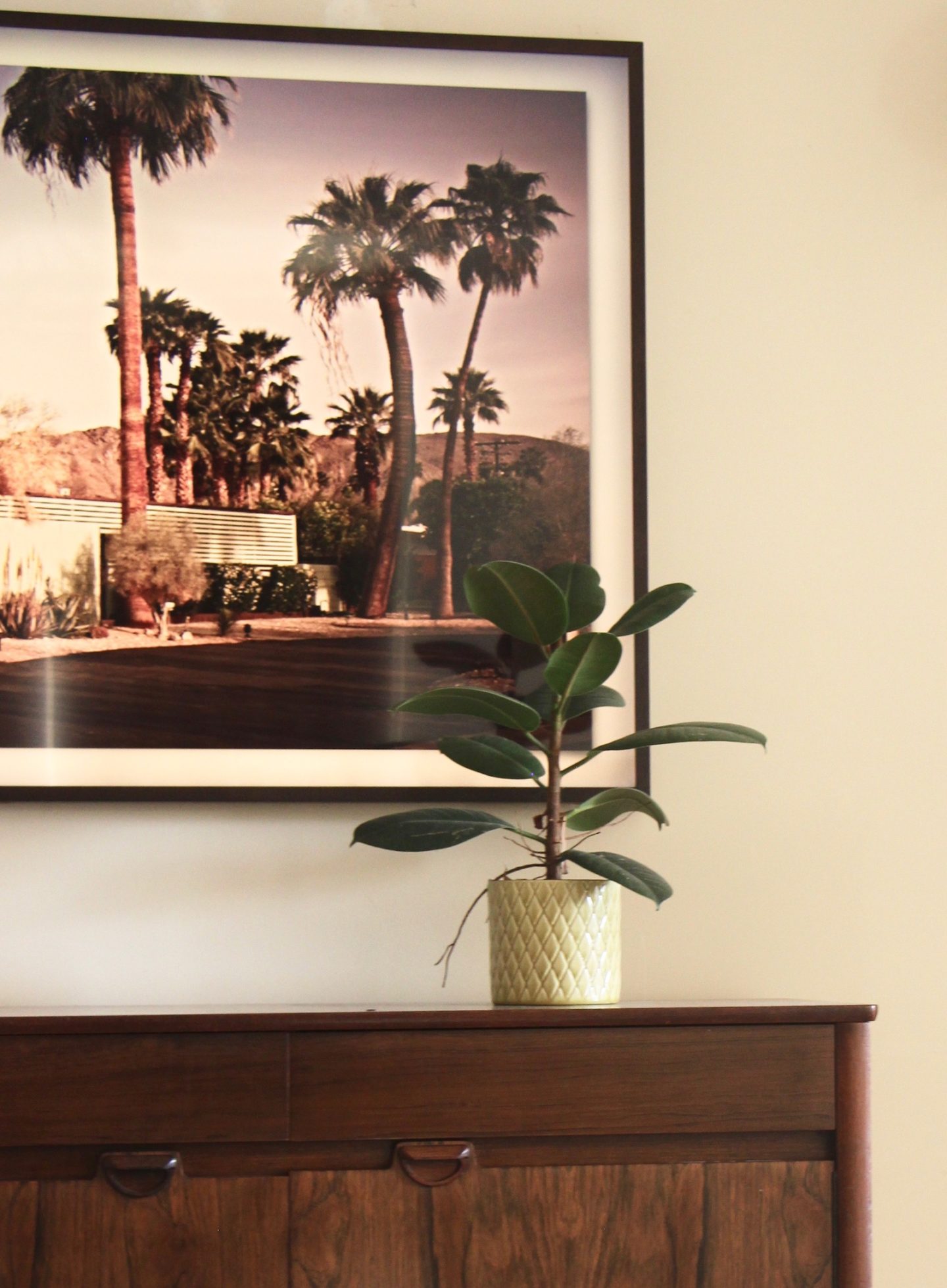 But anyway, I bought one and I love it. It was rather pricey in comparison to other televisions of equivalent size and quality, but you’re paying for the style, I suppose and the fact that this could be the ultimate way to hide your telly. I know that some other newer televisions have a sort of “screen saver” mode where you can display art when it’s not in use, but this differs in many ways; the incredibly realistic picture mounting effect that has shadows where you’d naturally get shadows on artwork, the fact that the set fits flush to the wall, the wooden frames, the variable brightness…

I don’t mind paying more if the design and function are impeccable and this is the case with the Frame TV. I paid £1999 (*cries*) at Samsung for the 65″ – the bezel was extra, but was on offer for £99 if you bought with the television screen. They have an updated 2018 version at John Lewis – I’m not sure how it differs, but surely it can only be even better? If anyone fancies a little video on this then do let me know! I could make one on Instagram if it’s a little niche for general viewing, but there must be other people out there who hate television screens…please say there are…