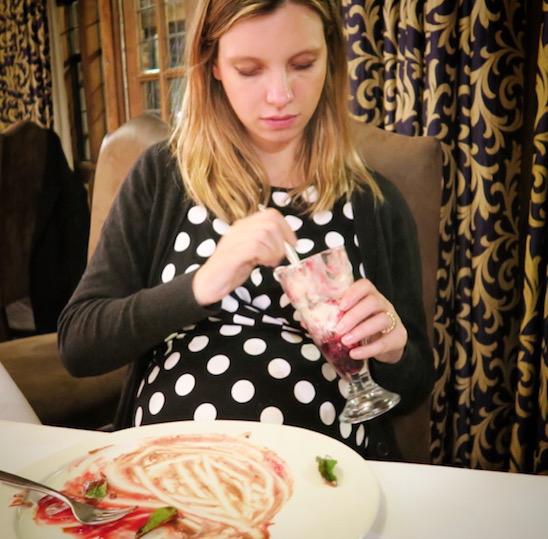 Well: this gestational diabetes thing has thrown a right spanner in the old works, I can tell you! (Photo above taken in last pregnancy, by the way, after I had polished off two whole desserts. I thought it was brilliantly inappropriate.) I just feel as though I’ve been diagnosed (my blood sugar readings, though not horrific, definitely indicate GD) and then left just to get on with things. No real advice, no explanations as to how the condition could affect the baby, or (more my concern) how my rampantly out-of-control blood sugar levels prior to diagnosis might have affected the baby…

So it has been a crazy week or so of intense Google research, and speaking to my Dad and Uncle about how they keep their Type 2 Diabetes in check, and chatting to my oldest friend Tasha about how she coped during her two pregnancies with her Type 1 Diabetes. I’d like to say that it has all been very interesting, and it has to a certain extent, but overall my one word to describe the situation would be: STRESSFUL.

Mainly, I think, because the diagnosis has been made so late. (I’m 38 weeks.) And wouldn’t have been made at all had I not sought a second opinion about baby size from a private obstetrician. (Always trust your instincts, people.) So I’m slightly consumed with low-level fury about the fact that I wasn’t given a fasting blood sugar test, despite the fact that my last baby was big and I have an immediate relative with diabetes, but I’m also frustrated and confused because keeping blood sugar under control is actually quite the learning curve, and I’ve been given approximately 14 days altogether to achieve it.

In case you are wondering what the hell I’m on about, Gestational Diabetes is a specific kind of diabetes that affects pregnant women only and it usually goes away once you give birth. It’s caused by (as far as I can tell) pregnancy hormones suppressing insulin production so sugar levels rise and the baby floats about in the equivalent of a Coca Cola swimming pool. It’s relatively common, but not that common that you need to panic yourself if you’re pregnant or trying to get pregnant – though if you’re overweight or have a relative with diabetes or had a big baby last time around then you might want to ask for the blood test when you get to about 24 ish weeks. And, if you’re feeling weird after that (I mean really tired after eating, or really thirsty, or weeing loads or looking as though you’re carrying a huge baby) then ask to be tested again. And again. 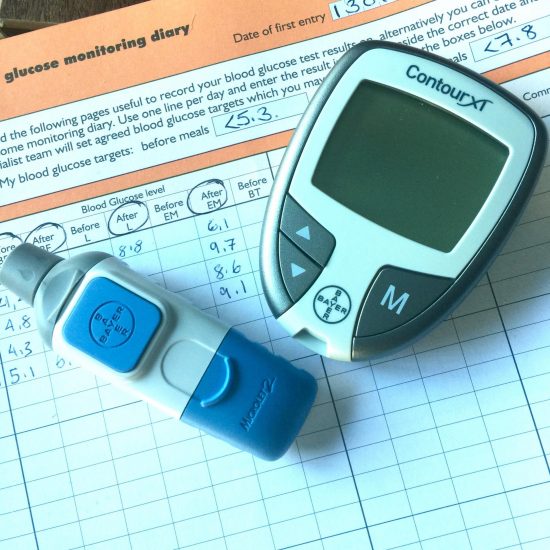 There aren’t supposed to be any failsafe obvious symptoms for GD, but I’ve been kicking myself because in both pregnancies I’ve had quite pronounced fatigue after eating – and I’m not talking about “ooh, I’m a bit sleepy!” fatigue, I’m talking about the type that sends you into a near coma for about three hours in the afternoon. Where you struggle to wake up and your head feels like it’s been cast in lead. In both pregnancies I’ve also had some terrible episodes where I’ve almost fainted, my hands have trembled uncontrollably and I’ve craved sugar to the point that I would crawl over broken glass for it. Surely warning signs, but with Angelica my test came back OK and, as I’ve said, this time around there was no test at all.

I’m off to see the consultant tomorrow and get a date for my c-section that I am now most definitely having. The whole GD thing has completely made my mind up, especially as the private obstetrician scanned for growth again and the baby was – unless she is grossly mistaken – huge. Before, I was in no rush at all to book in a date, thinking that I might plump for 40.5 weeks or even – ooh, risk-taker! – 41, as Angelica had been so late and I didn’t want to be unnecessarily early. Now I’ll go for whatever date they suggest, though I have reservations about pre-39 weeks because (again, Google research!) 39 weeks is supposed to be when the risk of respiratory complications due to c-section decrease.

Read about my VBAC/Section Dilemma…

My main concern, throughout all of this, has been to keep my blood sugars level and low so that when the baby is born it doesn’t have hypoglycaemia, which is when its blood sugar is too low because it’s producing too much insulin after its prolonged bathing session in the Coca Cola womb-solution. I’ve really been trying – but believe me, it’s hard enough to feed yourself properly anyway when you’re running about after a toddler, adding in massive dietary restrictions just makes life a million times harder. Cutting out sweets and chocolate hasn’t been a problem (too much) even though I lived on Haribo and Lindt over the Christmas period, but limiting carbs has been a bind. I eat a lot of rice in the evenings (curry, stir fry, etc) so I’ve swapped white rice for brown and reduced the portion size, upping the protein and veg. That works well. Breakfast is porridge, but I do like my porridge with a tonne of honey on top, so I have to try and be good about that. I can tell how well I’ve done by (obviously) the blood sugar reading an hour later – one morning I did minimal honey and the reading was 5.7 (target maximum is 7.8) but then this morning I thought I’d have a bit of extra honey and then do some exercise to burn it off, forgot to do the exercise and got a reading of 9.2!

Read about my Gestational Diabetes testing…

Omelette is a Holy Grail of blood sugar lowness – I did two eggs, full fat milk, mushrooms and grated cheese, which was delicious and epic, and the reading after lunch was 4.7! Usually it’s between 7 and 8. What else? Eggs on granary toast. Fruit and full fat yoghurt seems ok so long as I limit the fruit. Dark chocolate appears to be almost “free” and so I have all but bought shares in Green & Blacks. Overall, though, I’m playing it totally by ear, no matter how much reading I do and advice I seek. Because when you’re pregnant, and you have to eat, you have to eat. In these situations, I just do the best I can. I have almonds on hand constantly – will probably turn into one – and dates. The dates are for the constipation that my iron tablets are causing – HURRAH!

Did anyone else get a late diagnosis for Gestational Diabetes? How did you adjust? And did you end up with a C-Section? Large baby? As always, I’m intrigued by your anecdotes. Unless they are going to completely freak me out, in which case tell me in a few weeks when the baby is safely in my Snuzpod beside the bed!