A few weeks ago, I was running rather late for a casting. “Nothing new there,” I hear you say; and you’d be right. I am often running late for castings and the main reason for this is that over the years, I seem to have instilled in myself the belief that I can get ready – bathing, dressing, maquillage and all – in a mere thirty seconds.

So, back to the day in question: I had to have fresh, sheeny skin for my casting because it was for some kind of skincare. Nivea perhaps – I can’t quite remember, all of these thousands of castings seem to meld into one, long nightmare. Sorry: I digress. Fresh, sheeny skin in a matter of minutes – no, seconds and could I find anything? An illuminator? Strobe cream? A shimmery highlighter? Nope. Nothing. Nothing except this little tube of Lavera Wild Rose Intensive Cream!

Now, the Lavera Liposome intensive doesn’t actually have any shimmer or glimmer in it – let’s just get that clear. It’s an intensive moisturiser that Lavera recommend you use as a night cream, as it’s richer than the plain old ‘moisturising cream’. It contains all the usual ‘natural’ moisturiser suspects, including shea butter, sweet almond oil and fruit extracts, it absorbs nicely and – now this is the important bit – leaves a slightly oily residue on the skin. I hope that Lavera won’t mind me saying this, as it’s not a criticism at all, but it left my skin a little greasy! It’s not a criticism, because a) I’m using it in the morning, not at night as they advise, and b) I had very slightly oily skin to begin with, and so only a fool would then apply a cream formulated for dry and demanding skin!

The point is, that this residue actually created a beautiful glow! My skin felt extremely plumped out and supple, and I felt…can I use the word juicy? I felt juicy! The cream also smells amazing, and only costs £12.90! If you do happen to have dry, demanding skin then you should give this a whirl. I have tested a few Lavera bits and pieces and they’ve all been very good so far. One day, I’ll get round to writing them up. 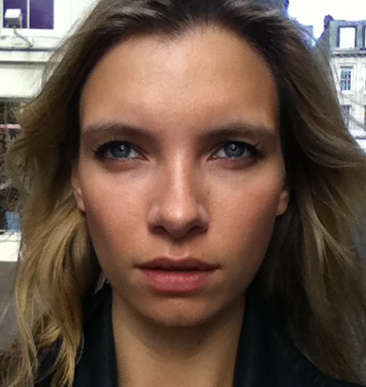 Here is my photographic ‘glow’ evidence: I am wearing Lavera Liposome Intensive Cream, Madara Tinting Fluid (very sheer!), Laura Mercier Duo Bronzer and i-Smoulder by New iD Cosmetics. Can you see that glow? This cream is definitely going into my makeup bag (makeup suitcase) for emergency face treating before castings!