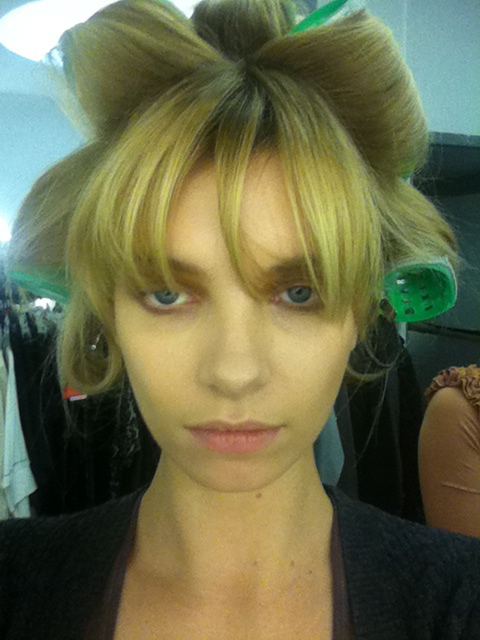 I’m having a lazy day on A Model Recommends today, because yesterday I inadvertently posted three things instead of the one that I was planning to. So yesterday, you lucky lot got yesterday’s, today’s and tomorrow’s. Today’s post is now a mish-mash of chit-chat and general news.

Yesterday I had a brilliant day shooting an ad for a new building development – I’m going to be blown up (not literally!) onto a humungous billboard, the location of which I will reveal nearer the time of display. I spent the day in a studio bashing old pianos with bits of wood and generally getting very dusty and dirty,  I ate a Southern Fried Chicken wrap for lunch and had a French Fondant Fancy (a pink one) for high tea.

As you can see from the picture above, taken mid-makeup, my fringe is in dire need of a trim. I have been simply pushing it to the sides over the Christmas holidays, but yesterday I actually had to carry off some kind of style, and it did my head in. I don’t know how you fringe people cope – it’s like having an annoying animal perched on the front of your head. It looked good in the pictures though…

To trim, or not to trim? I have no idea what to do with it – I’m thinking of letting you all decide by vote. I’ll keep you informed.

Interesting thing that the lovely makeup artist did yesterday; she mixed in a bit of MAC Face and Body in ‘white’ to some Giorgio Armani foundation and used it as a kind of ‘luminiser’ to lift the skin and give it a lift. It was a very different effect to using a shimmery, light-reflecting highlighter – less obvious, far softer. I shall be trying this myself at some point! A little tit-bit of insider information for you there – don’t say I never give you anything!