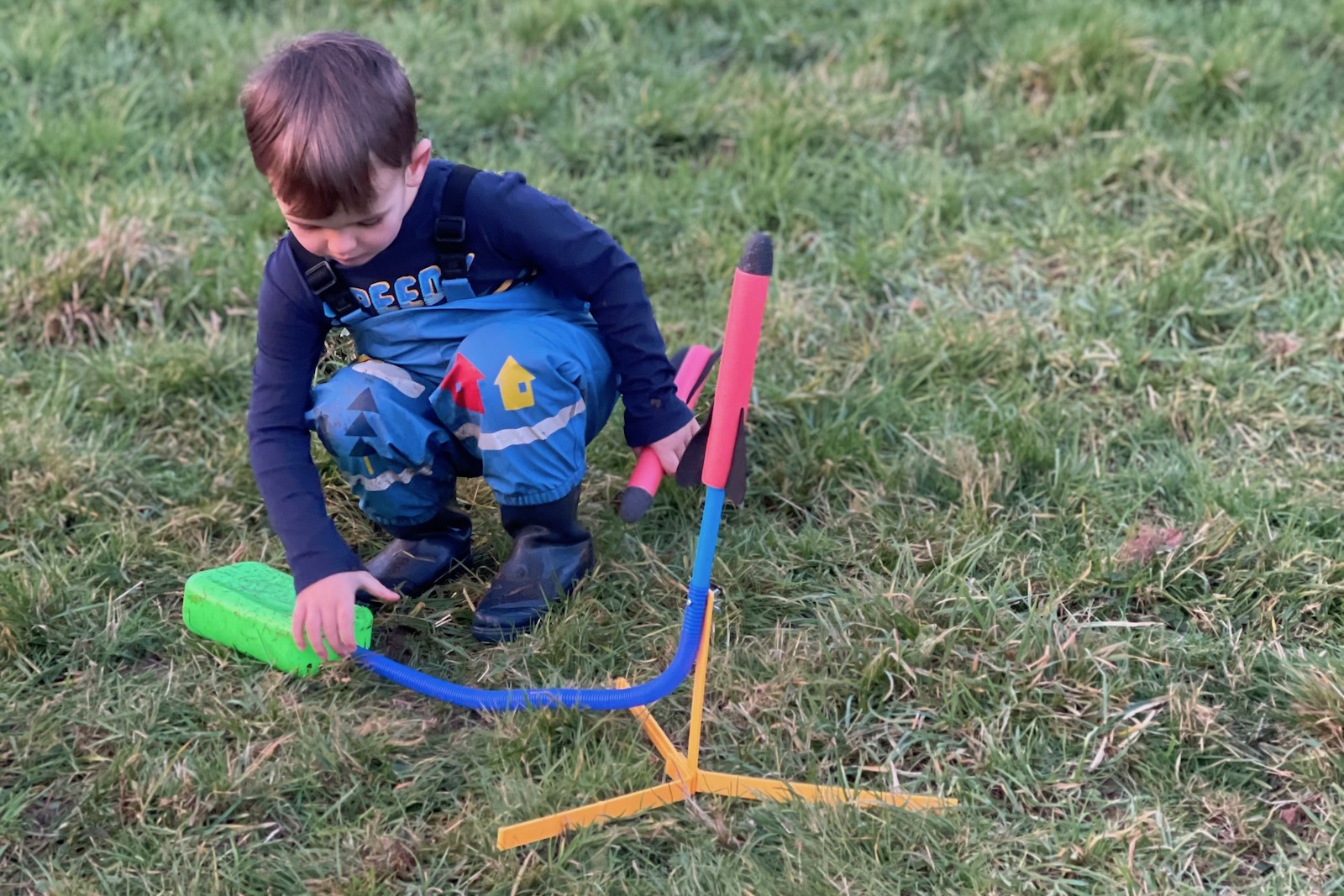 The three year-old is now suddenly four, which means that he can, by no stretch of the imagination, be considered a baby. Me miserum! No more babies. Actually, me not miserum at all, because I’m quite sure that another baby would definitely be the end of me. I love my children beyond the point of all reason but the various lockdowns and ensuing periods of intense familial chaos have purged me of any and all remaining broodiness. I fully appreciate my own babies and can absolutely see why people keep on producing beautiful little additions, but I could not handle any more responsibilities. The dead houseplants are a constant reminder of how you can only divide yourself so many ways – the cat has started to chatter to himself in the mirror for company and I haven’t checked in on some of my friends in months. Another baby would have to be raised by wolves. Or the dog.

So adamant are we that another baby is not on the cards, we have started to practice an extreme version of the withdrawal method: withdrawing before sex proper has even started. And despite knowing my cycle inside-out, I’ve decided that no days are “safe” days – all must be treated as though I have the world’s flirtiest, most sperm-receptive ovum that’s just bust out of ovary jail and is looking for a good time. I’ve even looked into heavy-duty prophylactics, too, the sort the thickness of a lorry tyre. A wall, however, is an even better barrier. A stud wall will do, it doesn’t have to be a structural one – I’m not mad! – just so long as it kills any passion and makes penetration impractical. 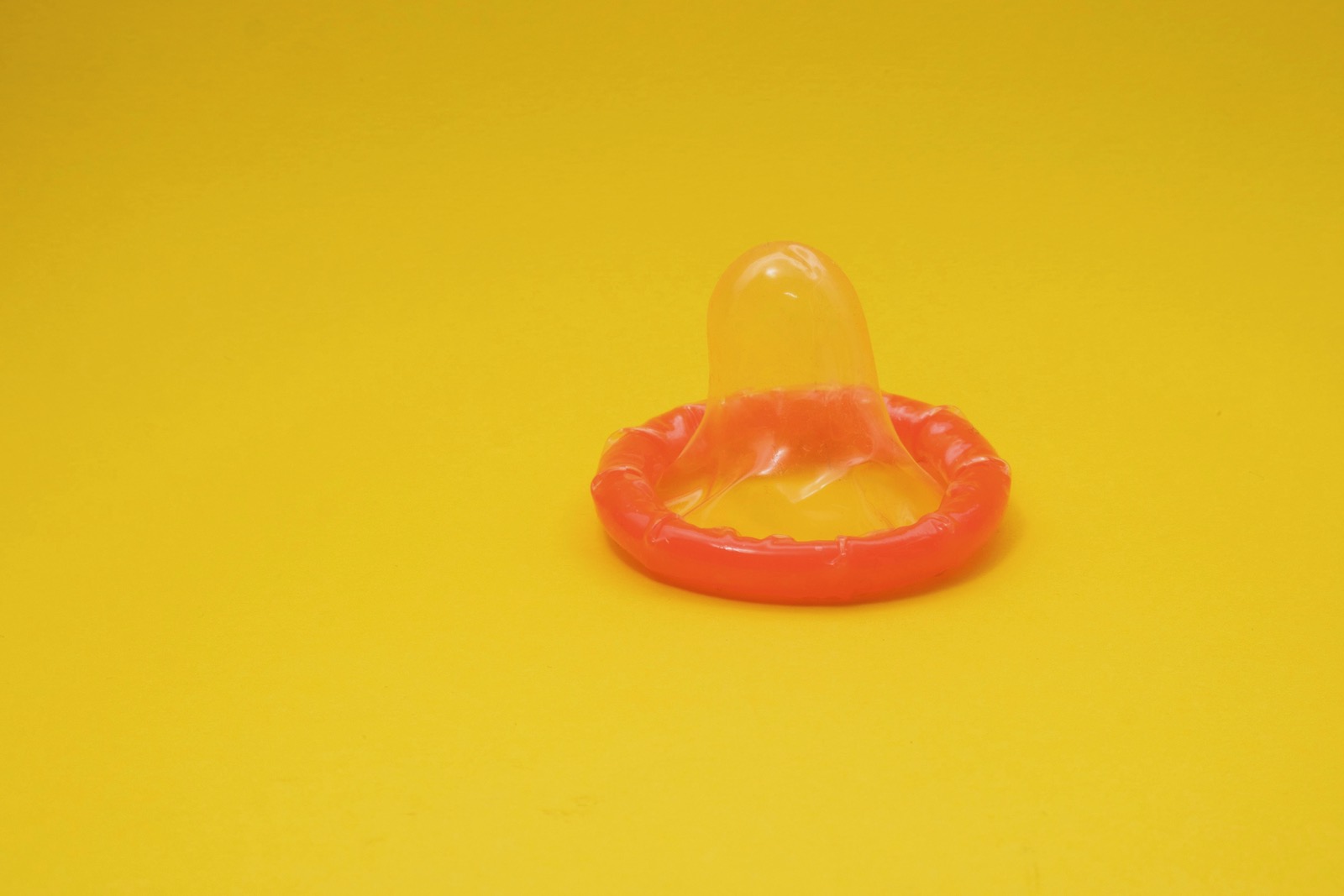 I’m joking, obviously. Sex is now one of the few permittable leisure activities and if energy levels allow, after the daily five mile walk and the Key Stage 1 phonics and the many Zoom calls apologising for missed deadlines, it’s a great thing to do in our spare time, which is between the hours of 7.45pm and 9.55pm.

God! I honestly just thought that Santa’s sleigh was about to land in my garden – I could hear bells jingling and the sound of dozens of hooves! (Though why hooves would make a sound in the air I’m not sure.) Alas, it was just Mr AMR mashing potatoes below me for the children’s dinner. Sausage and mash for them – we, the adult faction, have Hello Fresh tonight. This is our third week using this particular food ingredient delivery service and I’m going to do a review video on Instagram soon. I thought that an honest, straight-talking review could be a good thing, as it’s sort of a strange concept to get your head around. Or I found it a strange concept at any rate! I think we have Thai-Style Pork Bowl this evening, which sounds intriguing – cue lots of tiny sachets to squeeze into the pan – and maybe a Cadbury’s Creme Egg afterwards because it’s Grand Designs night.

(Little insight into our rock ‘n roll lifestyle, there.)

I’ve gone off piste: it’s my second baby’s fourth birthday, which means the baby years are well and truly over. It’s amazing how you forget each stage (one of the reasons I’ve kept up with this monthly life update, so that I can always refer back to it) and how the growing up happens so subtly and gradually, a little every day, that you only really notice it when you a) have to buy new clothes for them and b) get those iPhone photo “memories” sent through on your notifications screen. What the hell are they all about, eh? On the one hand: cute. On the other: creepy! A computer has pulled out a load of photos from your albums, based either on date, location or facial recognition, and then it has put them into a slideshow and chosen a (usually tear-jerking) royalty-free tune to play as a soundtrack whilst you digest it all and exclaim “that was three years ago? It can’t be true!”

The Apple iMemory iCreepy service-nobody-asked-for doesn’t work perfectly every time, I have to say: the other day I had a slideshow that played romantic music whilst two dozen photos of a window-fitter I’ve only met once gently transitioned across my screen. There he was holding an A4 sheet of paper to show scale for a timber-look cottage window; here he reached into his toolbox for a tape measure. The climax shot was one of him leaning out of an open window, mainly to demonstrate the casement openings, but Apple’s algorithm apparently thought it was some sort of Romeo and Juliet situation.

My second baby is four though! If you fancy reading my birth story for Baby 2 then it’s here – you can also scroll back through all of my monthly diary entries, if you fancy, they are here. I can remember the birth in full technicolor, still, Morphine dreams included, whereas Mr AMR remembers nothing. 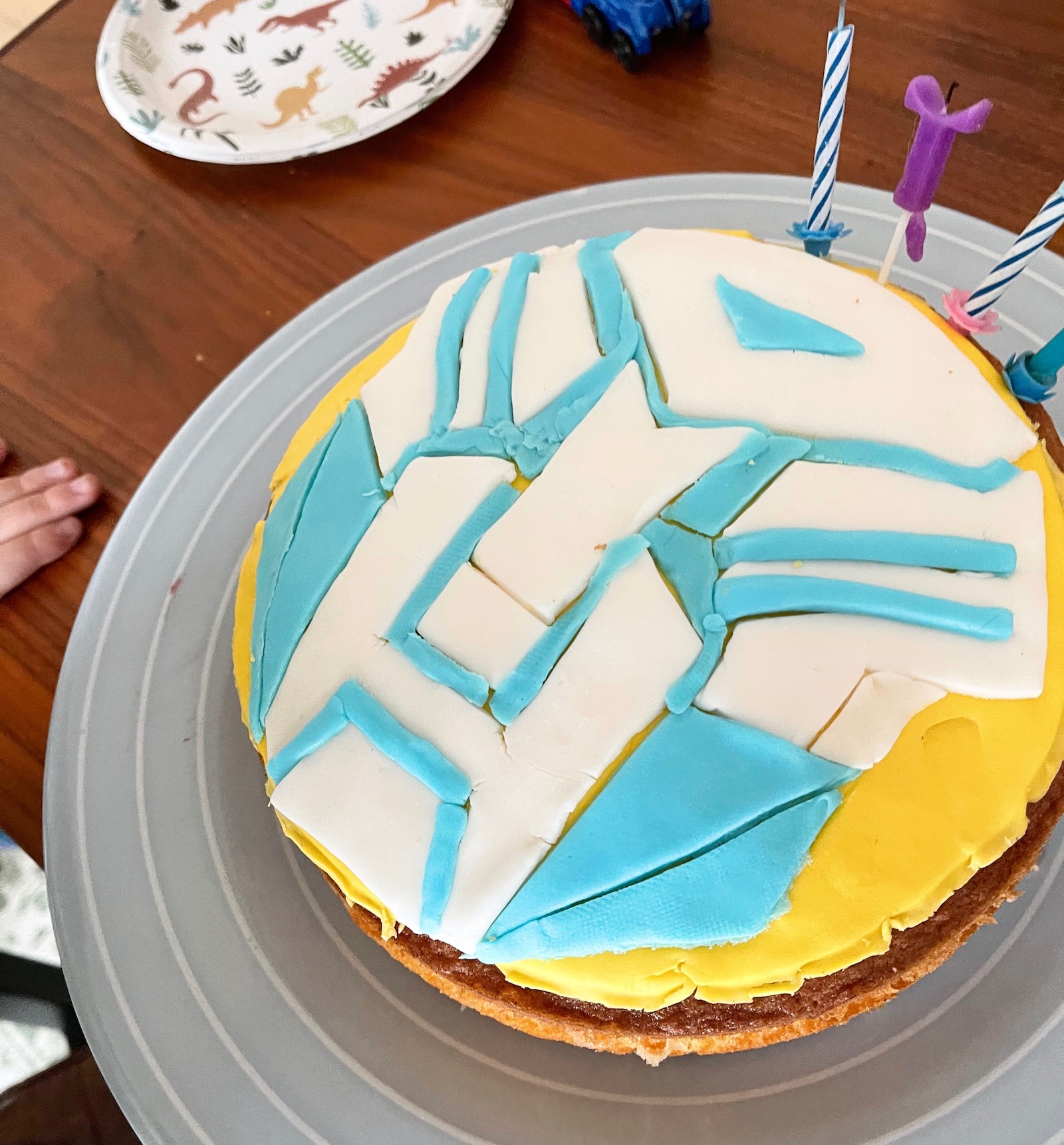 He did a fine job on the Transformers cake though (tenuous link, there!) cutting about ten thousand pieces of a Decepticon’s headpiece out of ready-to-roll fondant icing and laying them atop my freshly-baked sponge. (Not a euphemism.) I honestly thought that us making a celebration cake together would be one of those awful, marriage-defining events, like when you have to go to IKEA to buy furnishings for your first flat, or you go abroad together pre-sat-nav era and have to navigate to some godforsaken place that’s set into the side of a canyon with no habitation around it for at least four kilometres.

To be honest, I’m being silly – it would take more than a cake to wear us down. We once accidentally drove up a dry riverbed in Spain after being awake for thirty-six hours, in a hire car with less legroom than an old red telephone box, and I insisted it was a road for at least ten minutes until the riverbed narrowed in a deep ravine and there was no way to turn around. We had to reverse, painfully, in the midday heat. It was excruciating. You know when someone is so cross that you constantly feel you might laugh? Everything is suddenly hilarious. I’ve never been so desperate to speak – I knew I shouldn’t, but I just had this overwhelming urge to say something and break the silence.

“Isn’t it weird how the view is identical through the front and back windows?” I think I said. Boulders to the front, boulders to the back, a couple of dangerously fresh landslides, dried-up tree trunks, the odd skeleton of a goat that had no doubt died of thirst or frustration at the fact it thought it was meandering down the small road to Castellfollit de la Roca when it was actually following a river. (Why would you draw a map with roads in dark blue and rivers in medium?)

So yes the cake has been a success. And now I’m waiting to see whether “four” means more sleeping in past 5.50am. He lulls us into a false sense of security with a 7.30am wakeup call and on those days, emboldened by a good sleep, we decide to stay awake until – gasp! – 11pm. Maybe we indulge in some Bridgerton-esque sex, mentally, through the stud wall which takes us to midnight and you can guarantee that the next morning will be a 6am-er.

I had so much more to say in this life update: stuff about lockdown, stuff about moving (we’ve taken on a big renovation project in the most incredible location, see video here, there will be a proper update when I’m on top of my work again), stuff about homeschooling, stuff about missing parents. (As in missing them, not that they are missing.) I seem to have gone off on a silly tangent about sex and babies which was completely unintentional but perhaps it’s just more…fun…than stating all kinds of obvious about lockdown.

Of course if this was a private diary I would probably just have scrawled I am losing my MIND in my own blood, but I think the effect would be lost in translation once typed out on a MacBook Pro…